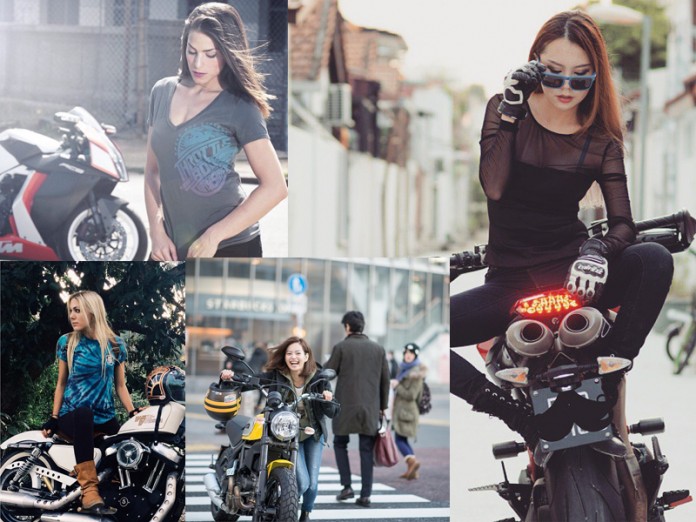 Bikers! Need to spice up your daily Instagram feed? Well, here’s 8 bikers chicks we think you should follow!

If you’re reading this page, then it is safe for us to assume that you share the same kind of enthusiasm we at BR have when it comes to female bikers. We don’t see them all to often, but when we do, some of them are actually just as pretty as the bikes they ride – maybe even prettier!

And ladies, don’t worry, we at BR also have not forgotten about you. This list is not just for the men to oogle about with, we have a few profiles here that we believe should inspire you lot further to continue biking!

In short, if you are an avid biker, lady or gentlemen, with an Instagram account, then here’s our top eight picks of two-wheeled ladies to follow.

( Photo lifted from IG: @brittanymorrow )
We start our list with a few ladies from the land of the free, America. Meet Brittany Murrow, a decently pretty blonde rider who seems to know her way around in taming her two favourite bikes – a bug-eyed Triumph Speed Triple and a hot pink Yamaha YZF-R6. Besides her extensive Instagram feed, Brittany also runs a Vlog series on her YouTube channel called QueenBee Moto. Oh, did we also mention she’s the founder of a motorcycle safety site www.rockthegear.org ? That comes to no surprise given that the is, as she claims on her IG, a ‘Pro Badass’ for renowned American helmet and apparels brand Icon. In short, Brittany is someone worth following indeed.

Next up we have yet another American, this time in the form of a dark-haired raven by the name of Annette Carrion. Hailing from the Orange County, CA, this dark-haired beauty also rides a Triumph, and if we’re right at deciphering her IG profile data, she’s an affiliate with a local Ducati/Triumph dealer in Newport Beach of the Sunshine State. In all honesty, we can’t enough of Annete’s pretty smile, especially when she’s posing on her beloved Triumph Street Triple R. Oh, you’d be glad to know that she’s also a MotoGP and racing fan in general, and her IG feed suggests that she’s a familiar face in the MotoAmerica grid as a model/grid girl too. Gorgeous looks, rides a streetfighter, and loves racing? What are you waiting for! Hit that ‘Follow’ button!

( Photo lifted from IG: @sammy_rc8r )
Next comes this mysterious dark-haired vixen who we come know simply as @sammy_rc8r. As her IG username suggests, Sammy (we reckon that’s her actually name) rides something truly hardcore – a KTM RC8R. Besides the fact that she rides one of the planet’s most beastly analogue supersports ever built, and that she has dark-coloured hair, we know very little about Sammy thanks to her small online footprints on any other social media network. But, we like it that way as it further adds to her mystique. Sexy looks, a dash of mystery and rides a KTM? Sign us up!

( Photo lifted from IG: @gabsia7 )
For our next entry, we cross the Atlantic away from America and into the European continent to find this dark-haired Polish beauty. A Yamaha YZF-R6 rider, Gabriela Iciek is also an avid motocross rider, and you can see some of her exploits of the beaten path via her IG. When she’s on the paved path, her preference lies heavily towards sleek supersports, which perhaps explained her ownership of the middleweight Yamaha R6. Unlike the vixen in number 3 of this list, Gabriela’s feed is a little less dark as she brings in more colour into our eyes here, which likely suggest that she may be quite a young little lass. As far as we are concerned, we are a fan.

( Photo lifted from IG: @kyokomarch5th )
Next comes this lovely looking Japanese bombshell by the name of Kyoko Ochiai. From what we can gather, she’s a mini-celebrity in her home country of Japan, and her most recent photos on her IG feed tells us she’s a big fan of the all-new Scrambler Ducati. In fact, Kyoko recently posed for some press photos with the Scrambler Ducati for the Japanese market, and we love how she pulls off the retro lifestyle look well to suit the bike. Other than that, we know rather little about this Japanese model/chick biker, but as always, a little bit of mystery is good indeed.

( Photo lifted from IG: @ann_niie )
As we move closer to home, we can’t help but make a pitstop into our neighbour to the north, Thailand. Not just a great holiday and riding destination, Thailand has also seen a rise in its female biker community, as proven by Prisana Panyasirinukul. Known by her IG user name @ann_niie , Prisana is heavily involved in two wheels as a racer, stunt rider, and model – all at once!. Her recent IG posts likely suggests that she spends most of her time riding her pride and joy – a KTM 1290 Super Duke R – when not modelling or indulging in her gym routines and tattoo fascination. Dear Prisana, for feeding our IG feed with plenty of beautiful shots, to you we say khop kun krap!

( Photo lifted from IG: @vaunephan )
Next up, we swing our southerly neighbour and its most celebrated chick biker, Vaune Phan. This sizzling Singaporean is no stranger to bikes and adventure. When not strutting about on her beloved Ducati Hypermotard, Vaune dabbles in a little bit of motocross and she recently completed a solo adventure ride from SG to Mt. Everest. She even made a pitstop in KL along the way to meet a few fans here, and we also recently got to hung out with her during WSBK Malaysia 2015 in the Sepang International Circuit. Besides Instagram, Vaune’s usually busy scribbling away on her blog, which usually revolves around her two-wheeled exploits and travels. You can also read up about her Everest adventure there.

( Photo lifted from IG: @miazil )
Last but not least, we bring you one of our favourites from the local Malaysia biking scene. OK, she may not be a local originally, but Mia is someone many have since welcomed warmly in the Malaysian custom bikes scene. She rides a sweet-looking custom Harley-Davidson, and is regarded as one of the key people in popularising the custom bikes scene in Malaysia thanks to the affiliation with local builders Abah & Sons Co. You can usually catch Mia at custom fests such as Art of Speed and the annual KL Bike Week fair. 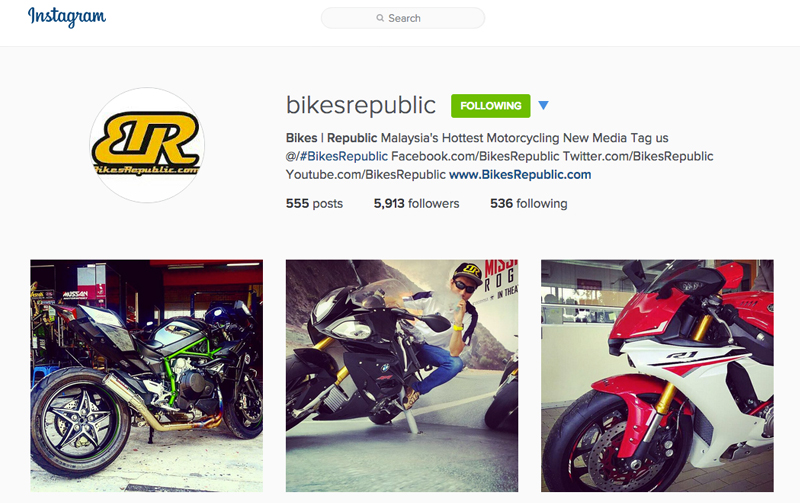 Alright, we are not exactly a bunch of hot babes in the office… But we do have plenty of hot bikes around us and you can see some of them on our official Instagram account! Give us a follow too!