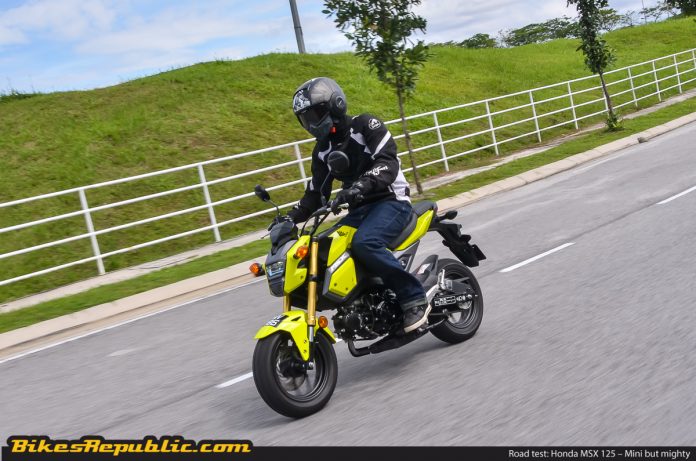 We put the Honda MSX 125 through a proper road test to see if it shines as brightly here as it did around a track. 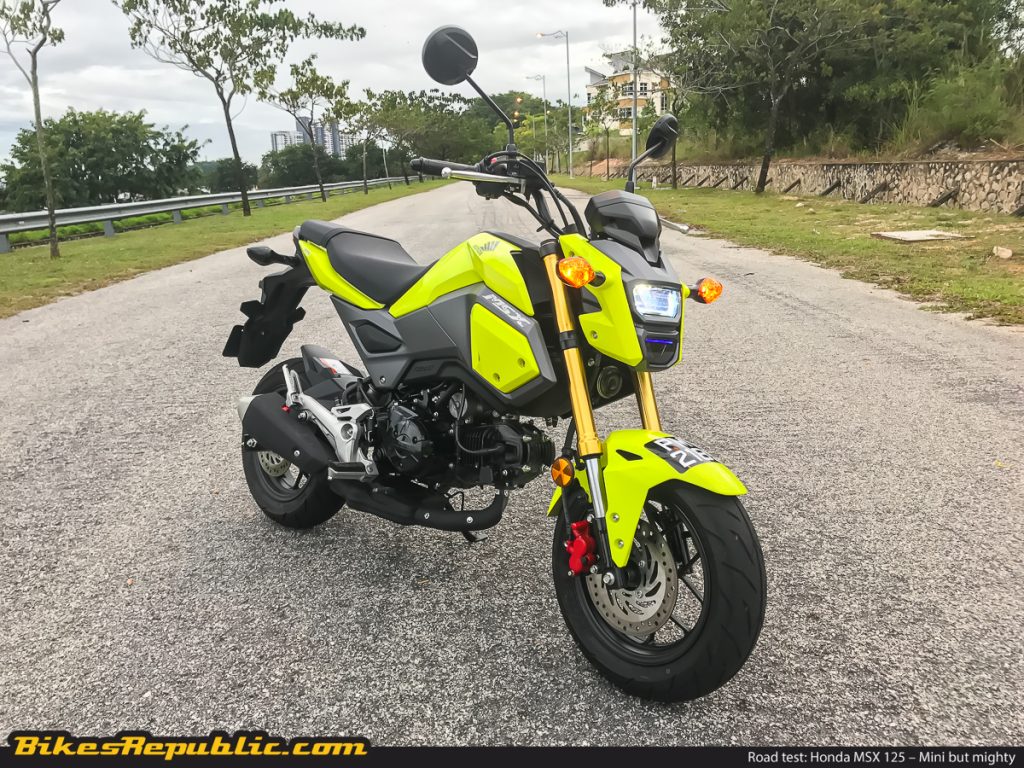 Having thrashed it around a go-kart circuit last month, the Honda MSX 125 proved its prowess as a pure fun tool brilliantly then. This time around, we put this pint-sized fighter through the ultimate real-world test by taking it for a spin in and around town. 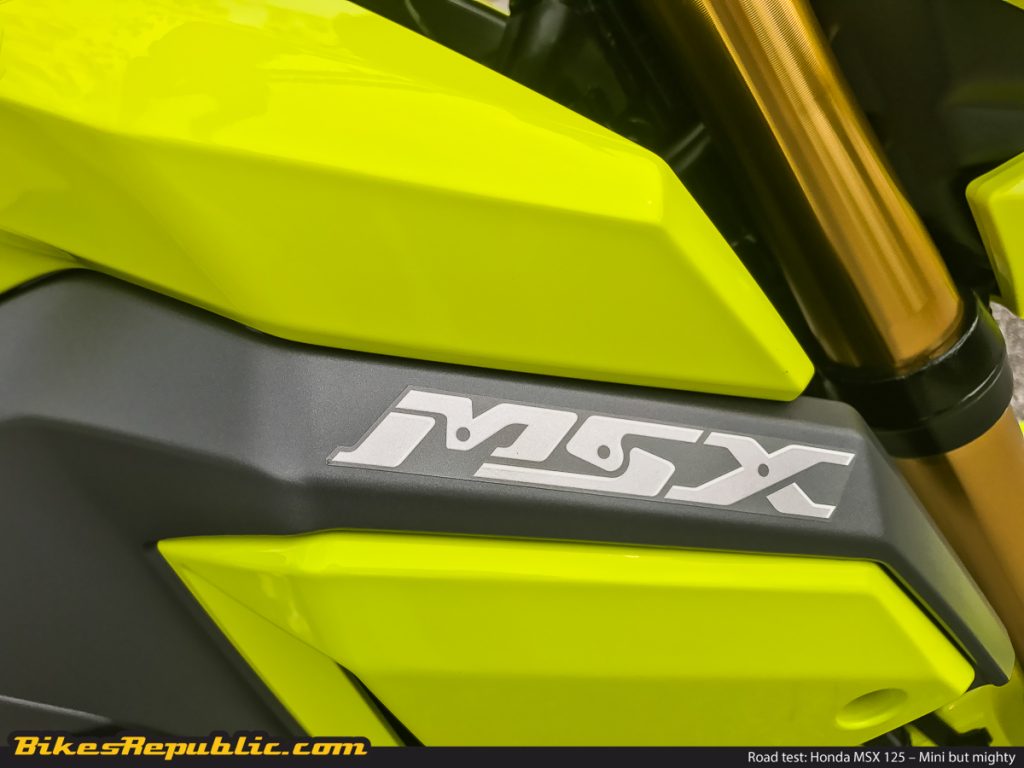 Also known as the Honda Grom in certain markets, the Honda MSX 125 is in fact a cult favourite bike around the globe. You don’t need to look far to see how much people loved this bike, just see how many of these – and its Kawasaki rival – roam the city street of most major towns in Thailand. 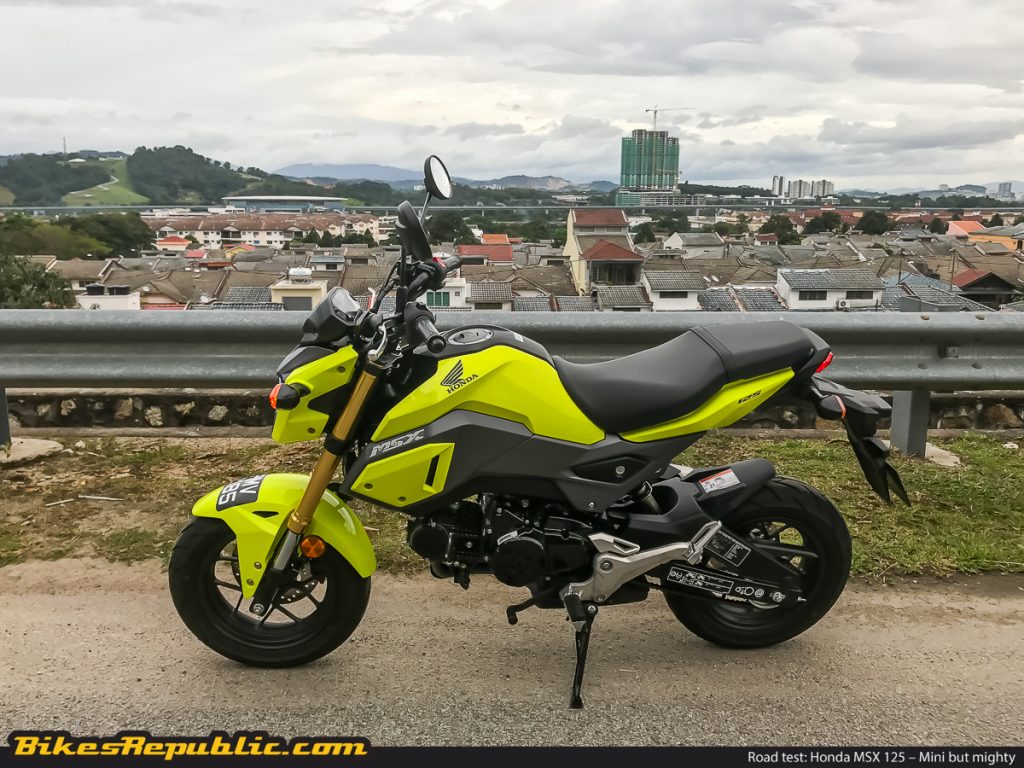 Given its compact size, it is easy to see how the MSX 125 easily becomes a favourite amongst many city dwellers worldwide. Besides its low claimed kerb weight of 104kg, managing the MSX 125’s 1,755mm length, 730mm width and 1,000mm height from its 765mm tall seat is a cinch.

Filtering through traffic with MSX 125 is a breeze, and it is actually less stressful to do so than being in the hot seat of any of its full-sized cub or kapchai cousins like the EX5 Dream FI, Wave series or RS150R. Minus the seemingly tiny standard mirrors’ lack of view, there’s little to hinder this bike’s urban mobility. 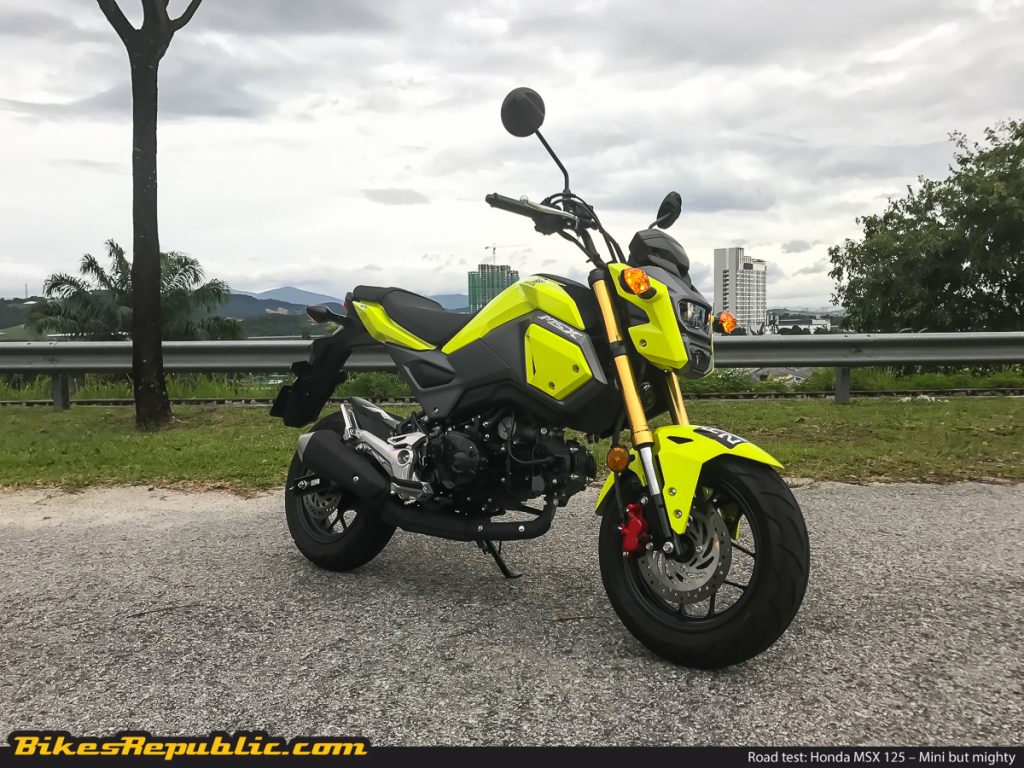 Adding to that is the MSX 125’s near-perfect handling. Much of this lie in its chassis, specifically with the anchors and suspension setup. Again, unlike its kapchai cousins, the MSX 125 differs heavily from them with its chassis hardware too, much of which more akin to bigger bikes, albeit smaller in size.

Though they may be the tiniest pair of telescopic front forks around, they do their jobs pretty well, soaking up bumps and imperfections without haste. The same can be said with the rear monoshock unit, offering the same level of compliance and comfort.

The all-round disc brakes – also perhaps the tiniest set we’ve seen around – also halts this mini supernaked in an equally brilliant manner. What’s more is the fact that they are easy to modulate in both the hand and leg levers, meaning novices should not find it hard to master at all.

We’ll admit, the sight of big MPVs, SUVs, lorries and busses whilst astride this pint-sized supernaked through the was unnerving initially, but it is something that one needs to get used to over time. Nevertheless, we’re certain that almost anyone – even ladies – will not be afraid to hop on and try to go about in town with this mini but mighty bike. 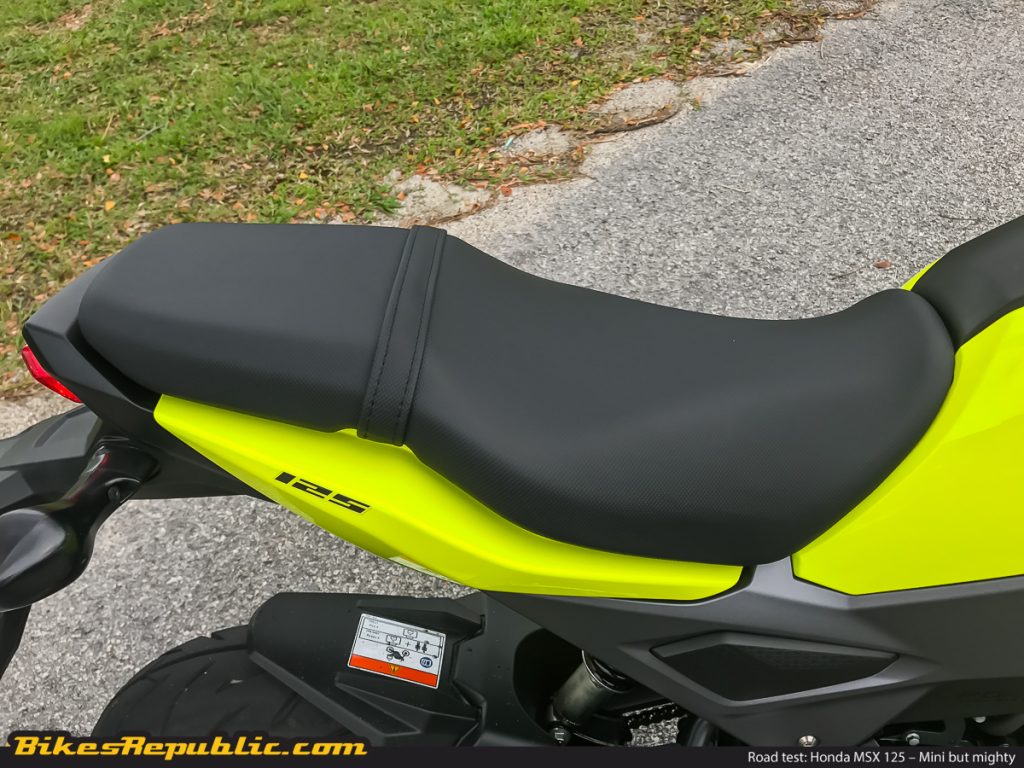 Adding to that is the universal ease of use and mastery the MSX 125 – or any other Honda cub and moped for that matter – possess. Getting to grips with the controls is super easy and we reckon the both novices and seasoned kapchai riders alike will easily master the four-speed gearbox and clutch lever as well.

With the MSX 125, size and power isn’t everything. Surely, its full-sized basic kapchai cousins like the EX5 Dream FI and Wave Alpha FI easily outclasses it when it comes to the typical short and medium commutes in between the suburbs and the city. 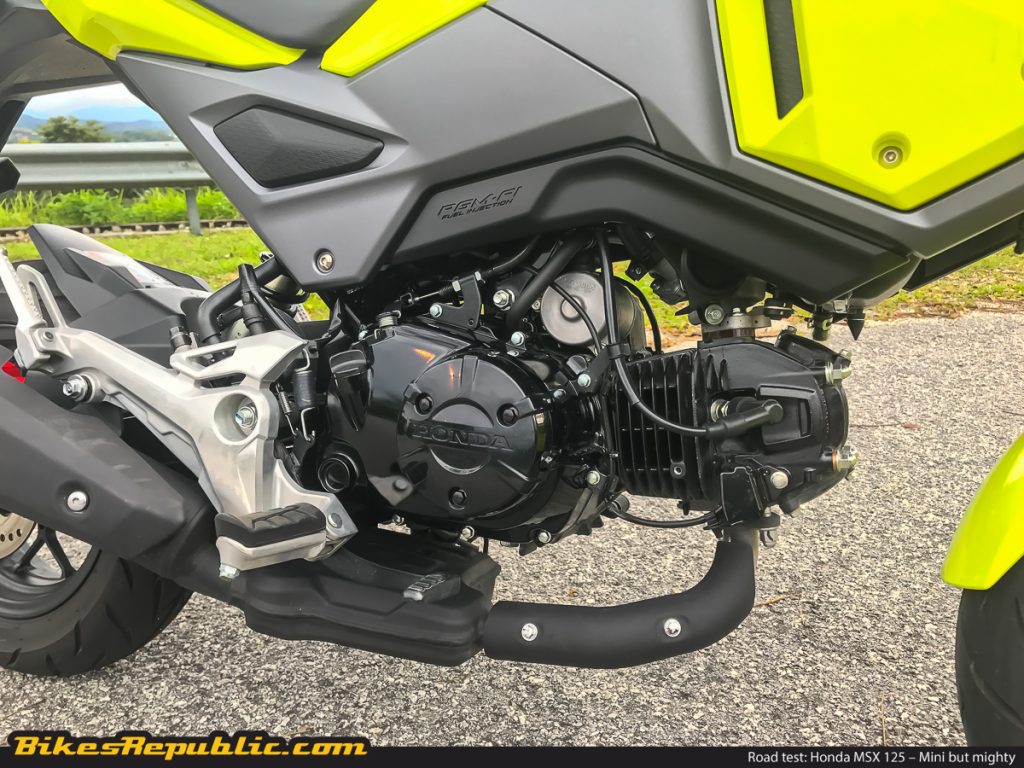 But that’s not to say that the air-cooled 125cc single-cylinder laced with electric fuel injection powering the MSX 125 isn’t lively at all – far from it. Surely, if the 9.7hp and 11Nm of torque available was adequate for the track, it was indeed sufficient for the road too – especially in the city.

Again, unlike its kapchai cousins, the MSX 125 makes up for its lack in power and small size through its rich style and big charms. Wherever we went, the MSX 125 doesn’t fail to garner plenty of smiles and sometimes comedic reactions from most. We reckon our test unit’s ‘Hyper Yellow’ paintjob fuelled that too. 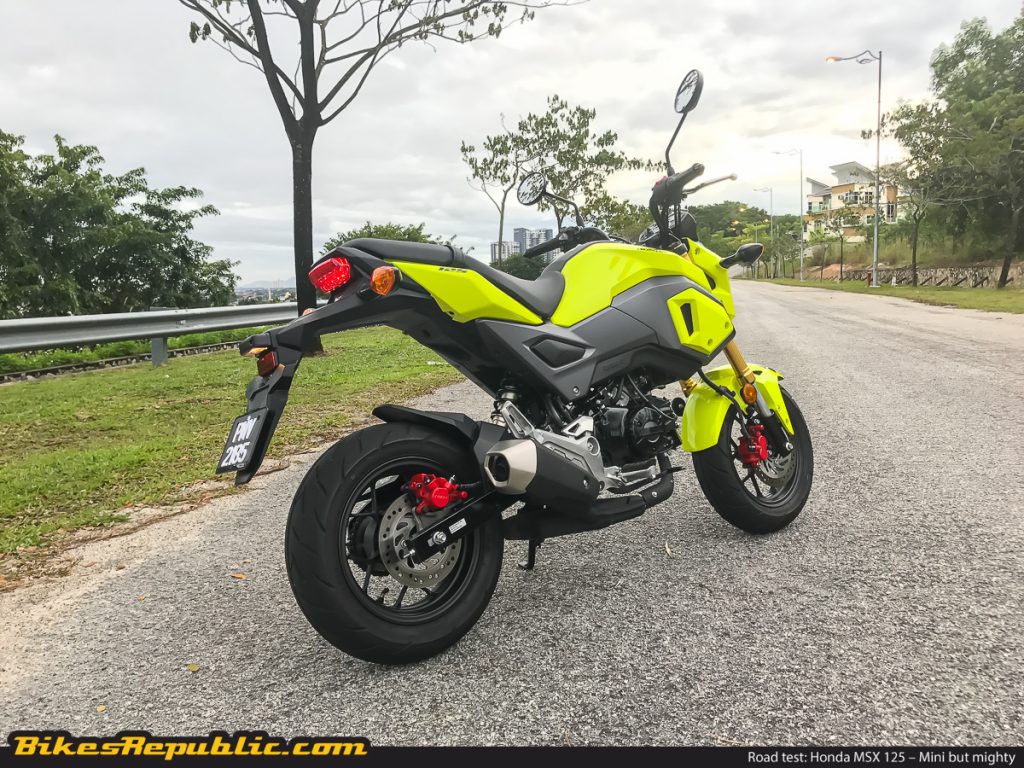 Should you choose to adopt the MSX 125 as a daily runabout in the city, you’d be glad to know that its small size does come with plenty of perks. For starters, you’ll never worry about moving around and parking in the cramped spaces of bike parking bays such as the ones in malls and commercial buildings.

The other benefit of this bike’s tiny size is the ease of mounting on and off kerbs and sidewalks too. This is a rather handy luxury for most bikers, especially when you need to run for dry cover quickly when the dark clouds open up and pour. 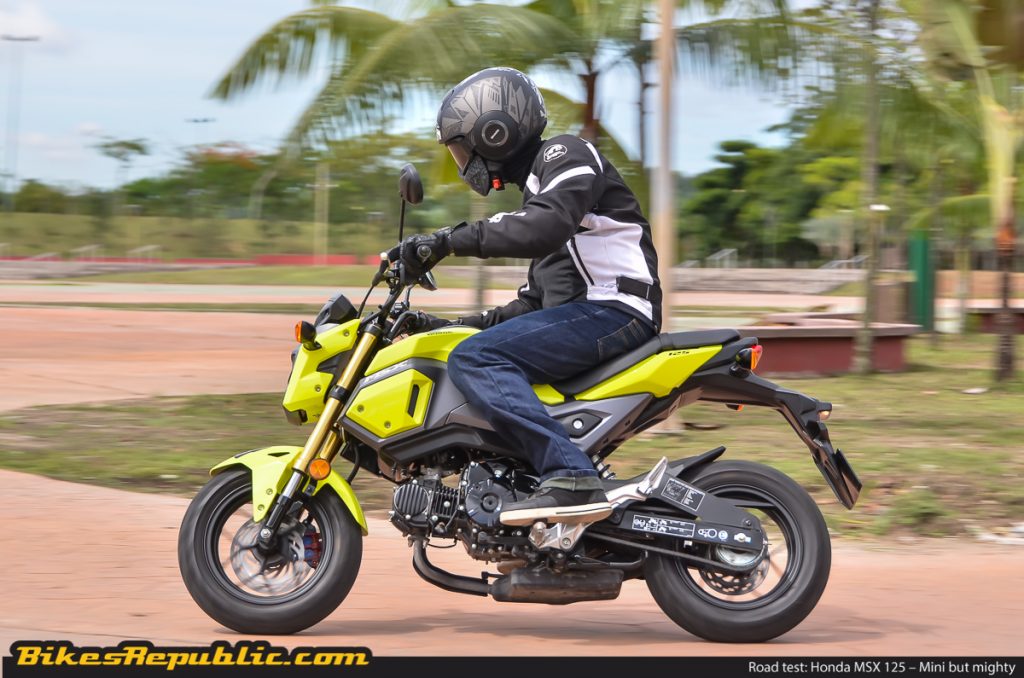 Of course, the drawback to this small size is the absence of useful storage space on board. You’d best invest in a properly large and weatherproof backpack to carry your things and rain gear because adding a top box will not only ruin the MSX 125’s style and stance.

To the question of whether the Honda MSX 125 can carry a pillion, the answer is both yes and no. You can if you wanted to, but the person astride the back will not find it comfortable and the added weight will really slow things down. Truth be told, pit bikes like the Honda MSX 125 and its rivals are best tasked with single riders only. 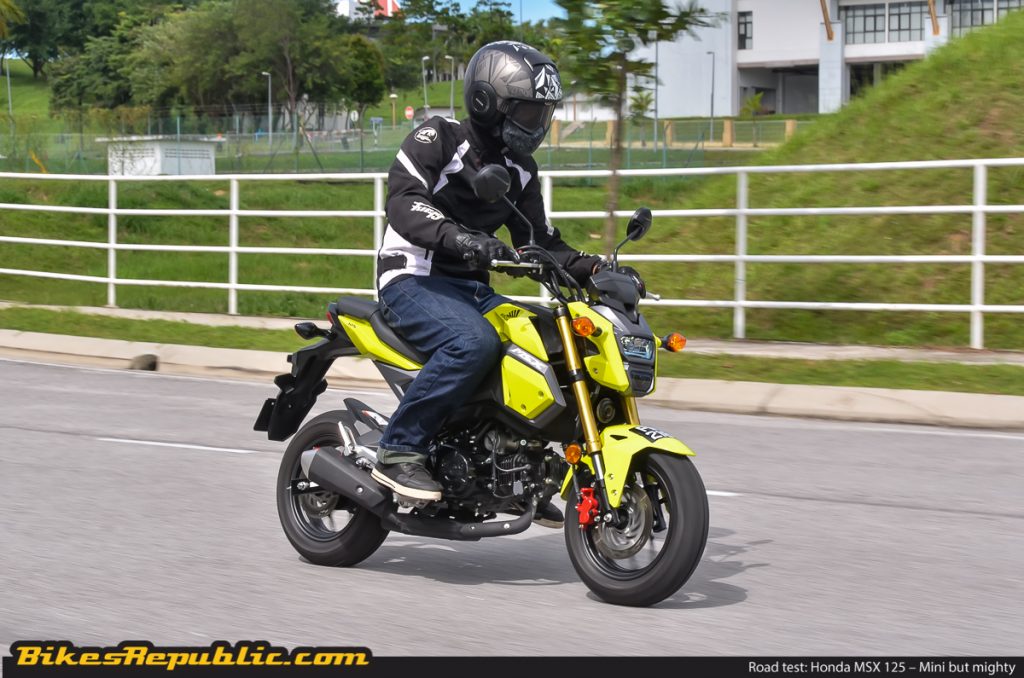 Surely, if you wanted a practical and slightly more capable commuter, any other Honda cub or AT scooter like the new Beat will suffice. But if you wanted style with a lot of character with some performance added, and you don’t mind spending a little, then you’d want the MSX 125.

We’ll agree that the RM11,128.94 (basic with GST) figure is a very expensive ask, but the Honda MSX 125 rightfully commands it for the sheer amount of style, performance and fun it will deliver. 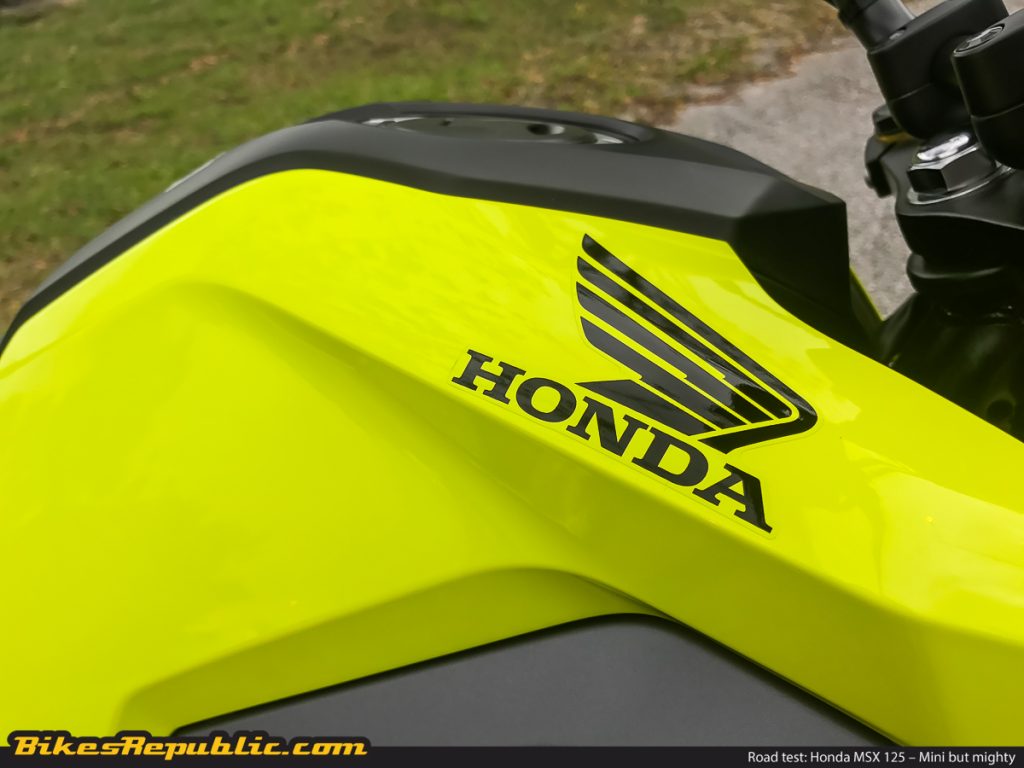 You can check out more images and the full technical specs of the Honda MSX 125 below.