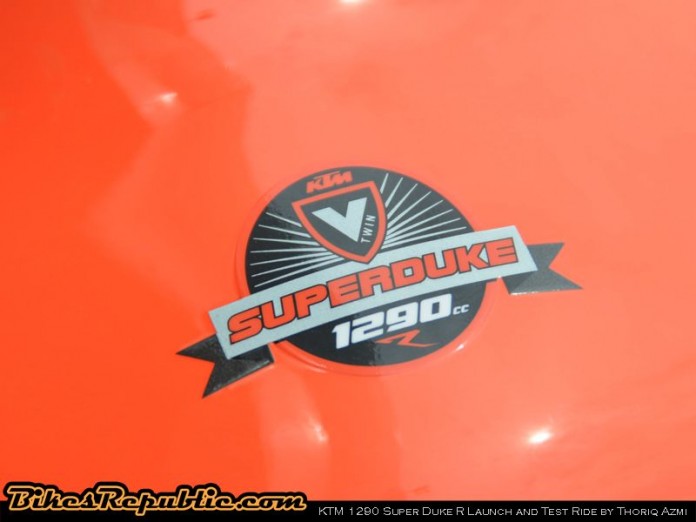 There has been a lot of hyperbole surrounding the launch of this, the fourth iteration of the Super Duke; from KTM themselves (see ‘The Beast’) and, from the journalists who have ridden it, with one even giving it an 11/10 rating! That amount of hype cannot help but generate interest, anticipation and for us keen motorcyclists – expectation. 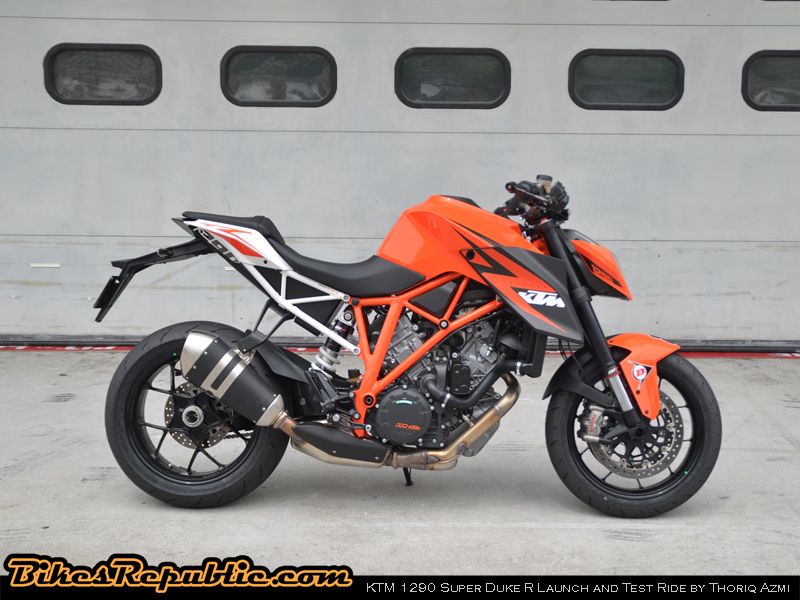 Expectation fuelled by an aggressive marketing and PR campaign of wheelies, burnouts, backing-it-in and other over-powered motorcycling ‘bad behavior’. To be honest, when the invite came (which we accepted in a heart-beat), there was some trepidation on this writer’s part- was the Super Duke R (SDR) going to spit me off and expose me for the clearly inferior motorcyclist that I am? Was I worthy of such an extreme vehicle? 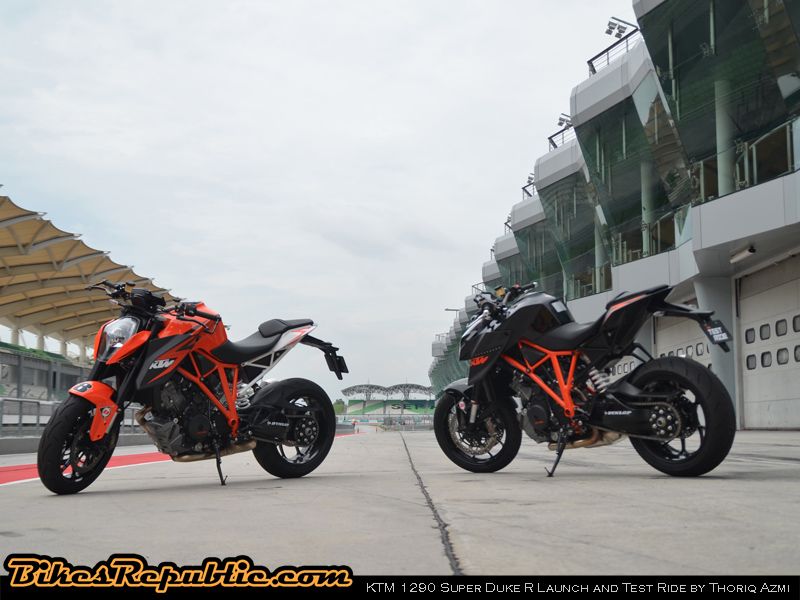 KTM AG obviously considers Malaysia as an important market, taking the effort to fly in a bunch of demo bikes and, more importantly, key members of staff who worked on the development of the SDR. The presentation they gave was informative- suffice to say, the SDR is KTM’s flagship product, pushing the engineering envelope in every sense – mechanically, technically, and electronically. Which, given that KTM only started producing road-going motorcycles a decade ago, is doubly impressive. 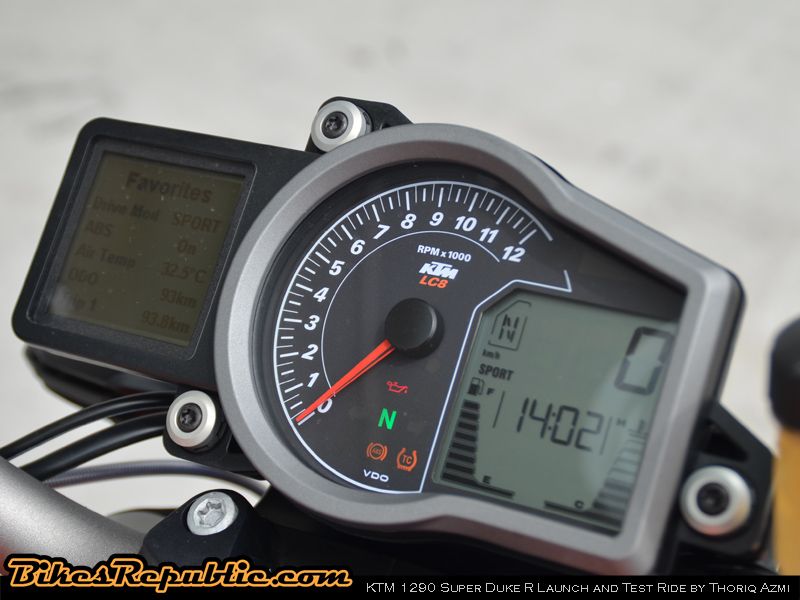 With the SDR, KTM claim to have produced a package that seamlessly combines ‘Ready to Race’ with everyday usability and even, touring ability. These traditionally divergent demands have been accommodated through the use of electronics: ride-by-wire, ABS and traction control, which together have tamed a motorcycle that KTM’s own development riders deemed ‘un-ride-able’ with a traditional cable throttle. The electronics thus acting like a cage for ‘The Beast’, which, was exactly how the SDR was developed- first as an analogue motorcycle, upon which the electronics were then layered upon. 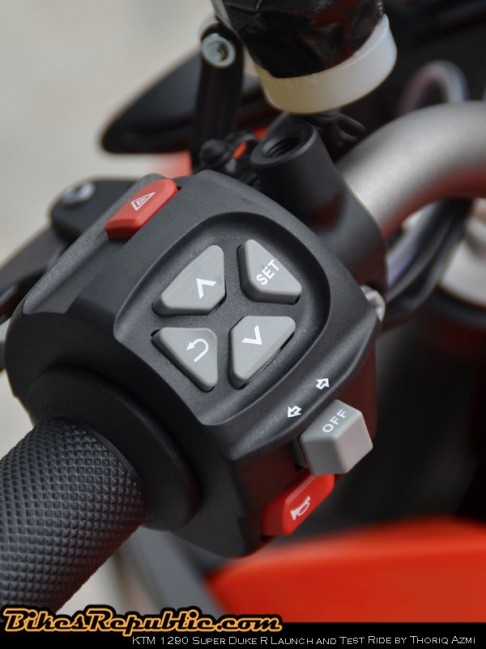 To be honest, it seemed a little schizophrenic to me.
On one hand, there were umpteen claims of ‘race-this-race-that’, ‘most-torque-this-most-torque-that’, but on the other hand, KTM went to great pains to emphasize that the electronic systems enabled even the most novice rider to ride the SDR- when in the appropriate riding mode- without fear. It’s like being told that that black bear charging towards you just wants a hug. Clearly, some saddle time was called for to clear up this confusion. 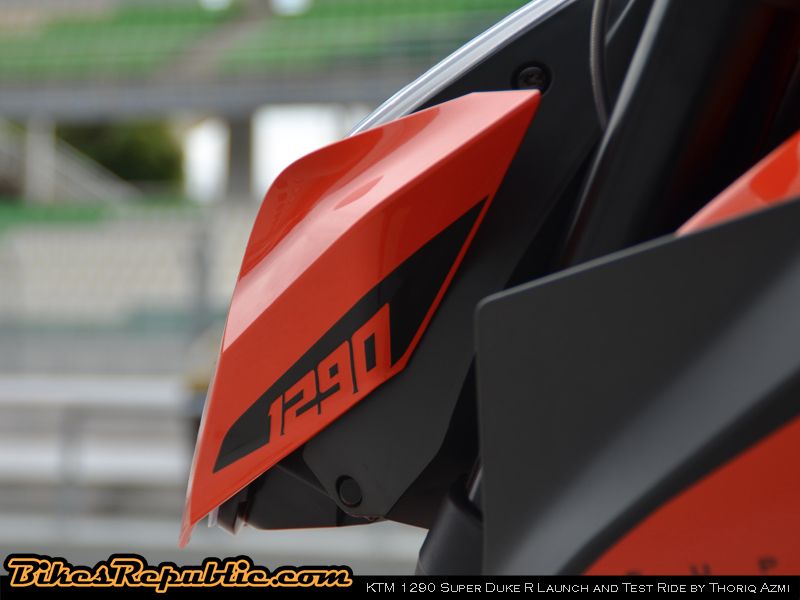 And, it is my opinion, that Sepang International Circuit (SIC) was not the ideal setting for the SDR to show off its many outstanding attributes. (Of course, I realised that SIC is the ONLY feasible place to launch a product like the SDR. Any other location would have been too risky/dangerous for the organizers, despite the indemnity forms we’d all signed away our lives on. I also realize that in this day and age of 180bhp motorcycles, the track is the safest environment to explore the performance envelope of these types of machines. I’m just saying, that in the case of the SDR, SIC was not ideal.) 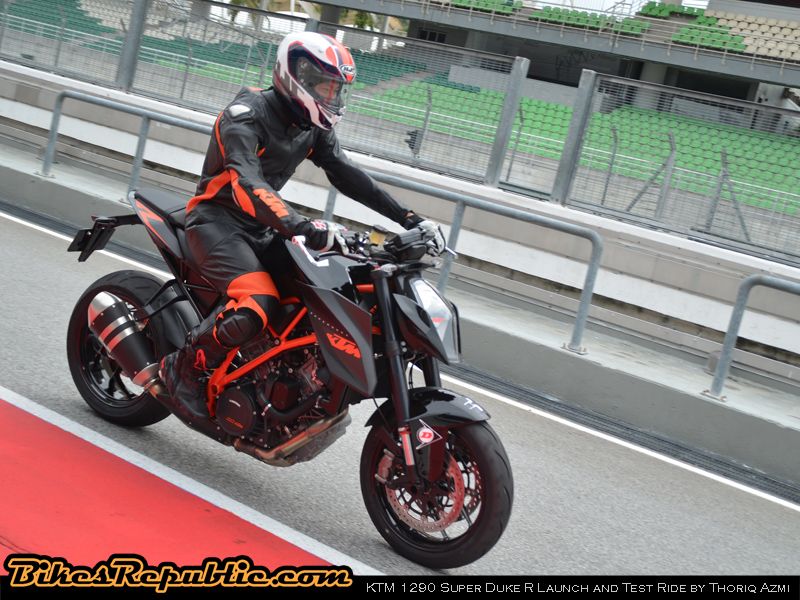 Because, the SDR is, first and foremost, a road going motorcycle: designed around road criteria and, needs. Which, the hallowed tarmac of SIC cruelly exposes. 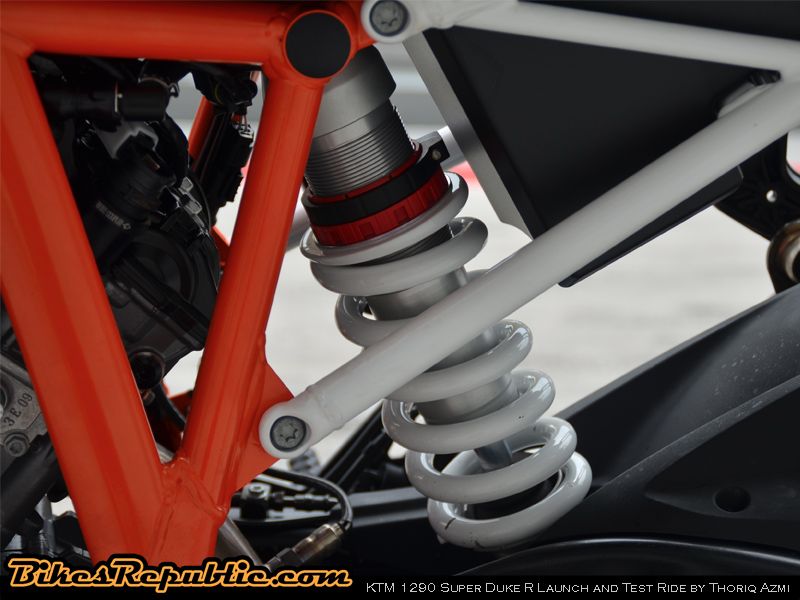 An upright seating position with no fairings punishes you on the straights and the many sweepers, exposing you to massive wind blast and affects stability; the wide comfy seat plus low set foot-pegs aren’t ideal for ‘hanging-off’; the aforementioned low set foot-pegs compromise cornering clearance, grinding their way around several corners; the gearbox is precise and mechanical, but too slow for track and needs a quick-shifter; the slipper clutch is too tight for the track, generating too much engine braking, even locking the rear wheel on aggressive downshifts, and also contributes to abrupt throttle pick-up in corners; the engine has so much torque that corner exits are a struggle- you’re either fighting for traction or fighting to keep the front wheel down- sometimes both at the same time; and that nice upright seating position doesn’t help you to put much weight over the front, which does feel vague; the brakes are very effective at shedding speed, but with a soft lever feel (due to the ABS system) it does not encourage trail braking. Lastly, our demo bikes came on Dunlop Sport Smart 2 tires- which, as you guessed it, are road tires: built for longevity, wind/rain/shine, neutrality, predictability, etc., and not, for ultimate grip, feel and the high temperatures that circuit riding generates. 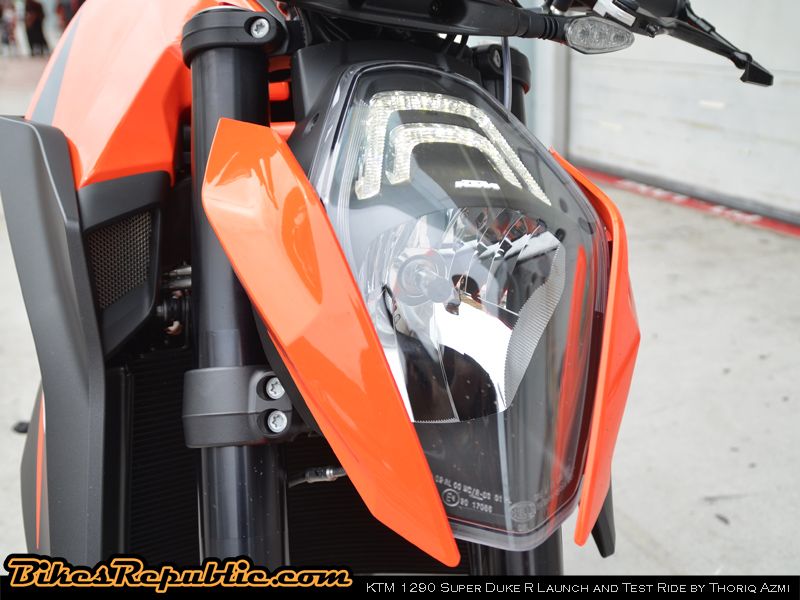 However, for every ‘negative’ discovered at SIC, I speculate the opposite to be true on the road:
That upright position, comfy seat and low set foot-pegs means mega riding comfort and great all-round visibility; the unassisted gearbox and its mechanical nature encourages the rider to interact with it, rather than just ‘press buttons’; that slipper clutch which is too tight for the track means reassuring engine braking when you overcook the entry into a corner; huge torque means easy overtaking in higher gears and relaxed long legged cruising; ABS is a must on the streets, where surfaces are varied and emergency braking a distinct possibility; the Sport Smart 2s, which held up amazingly well to ham-fisted abuse, would be an excellent choice on the street, where they would not over-heat; high and wide bars make it easy to maneuver in urban spaces and tight mountain passes alike. Hell, even the lack of fairings and a screen means that one gets to enjoy the breeze more. 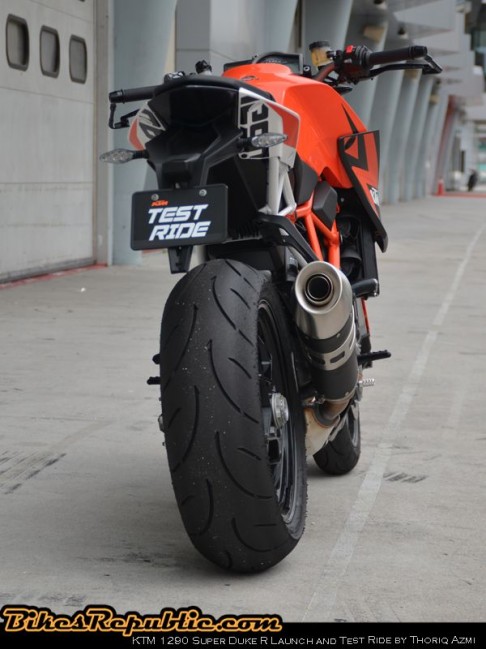 It is not surprising when you think about it: contemporary racing machines (and the tracks built to accommodate them) are extremely specialised. They make unique demands on those who ride them: just think about the rider’s body position- butt perched on a narrow saddle, legs tucked right up, upper-body draped around the tank, head-down. That does not make a comfortable or practical road bike, and that’s ONLY considering the rider’s position on the bike.
(Yes, I am aware of that guy who rides around the world on an R1. Yes, I’m also aware of that guy who rode round the States on a Panigale. Yes, of course it can be done. I am not disputing that. But, would it be ideal? The fact that thousands more motorcyclists set off on trips or commute using ‘road’- as opposed to ‘sport’- motorcycles seems to suggest that it is not.)
And if you think about it further, the SDR is most definitely not a race motorcycle- there does not exist a single class or category in FIM sanctioned motorcycle racing where it would be eligible to compete in. Thus, it would obviously not make any sense for KTM to optimise the SDR for the track. 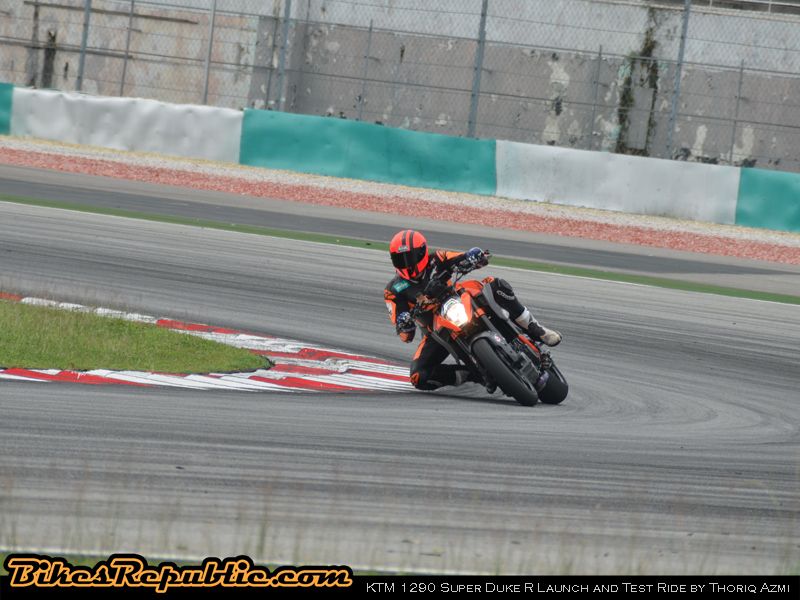 So, I was going through, once more, the video we recorded of the presentation and, a word leapt out at me: Fun. Sure, they did not put ‘Fun’ on any of the slides, nor mention it as part of the official blurb, but it was the undisputed No.1 adjective used to describe the SDR by the people who developed it: Fun.

Isn’t ‘Fun’ THE reason most of us started motorcycling in the first place? Before egos and attitudes took over, wasn’t it just the sheer fun of riding that got us hooked? The wind in your face, the sense of freedom, the sheer… joy? 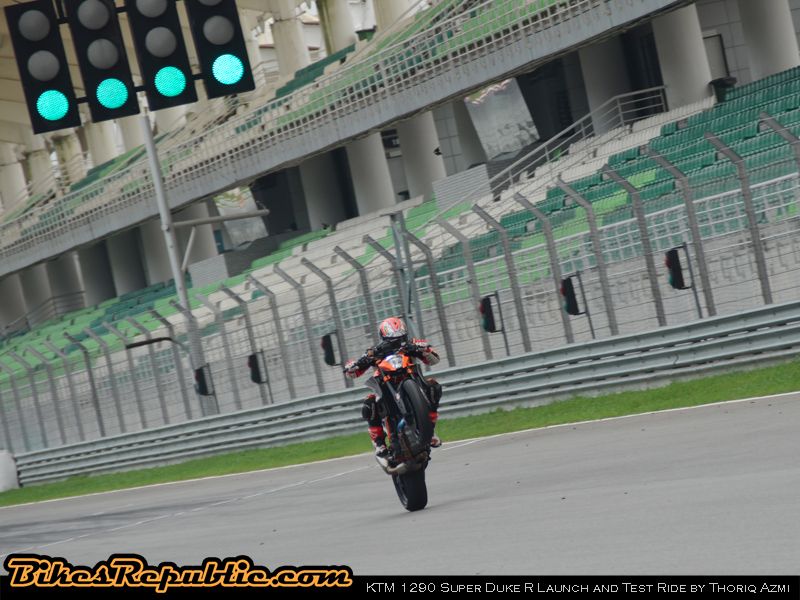 The power/torque is not there for speed- it is there for fun. The electronics are there because crashing just is not fun. The ergonomics are such because being hunched over just ain’t fun… It all suddenly made sense.
Perhaps ‘Fun’ isn’t cool anymore, and ‘Fun’ doesn’t sell bikes. That’s why they have to make the marketing message hard-edged, to give ‘real’ motorcyclists a ‘real reason’ to buy a bike like that. But let’s be honest with ourselves: if one rode as hard on the road as one did on track, one won’t have a long riding career. Just look at the mortality figures for road racers (i.e. IOM TT, NW 200, etc.) or, the recent spate of ‘big bike’ fatalities here in Malaysia. 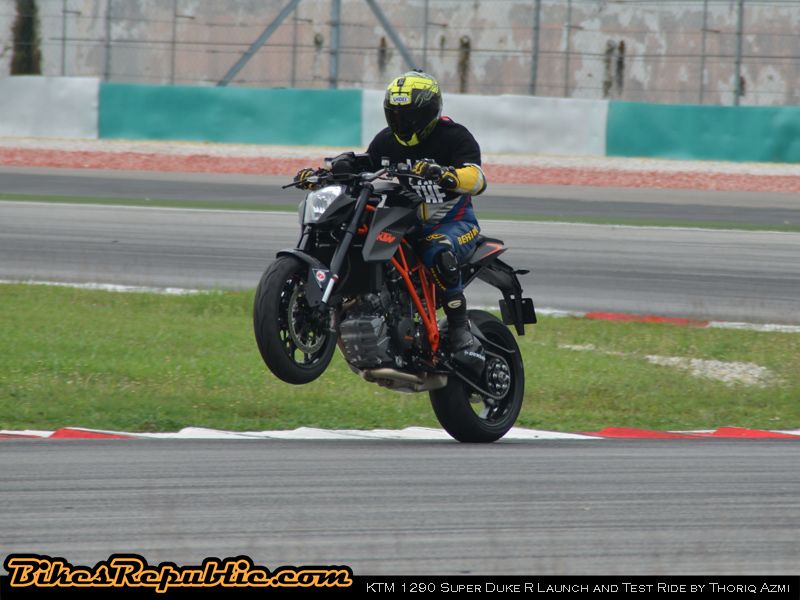 So, is the SDR a big softie? Well, no. It showed its fangs, and tried to spit me off twice in the space of a single lap, when I got complacent and thought the electronics would sort everything out… OK, OK, I was also trying to chase Jeremy McWilliams, who was on slicks!
In closing, I think KTM should be lauded for producing the SDR, an unashamedly ‘FUN’ motorcycle, a motorcycle which is relevant to the vast majority of motorcyclists. I still believe that SIC was not the best environment for it, not that the SDR wasn’t capable on track rather it wasn’t ideal. However, for the motorcyclist who is going to do 90% of his/her mileage on the road, the SDR could just be the ultimate do-it-all motorcycle. I hope we at BR get the chance to find out.