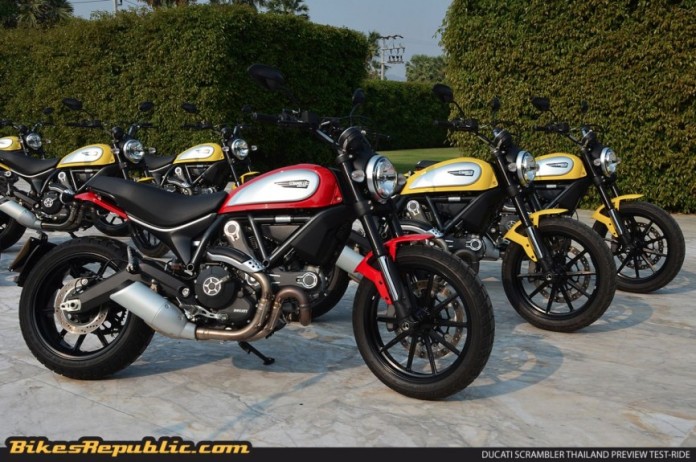 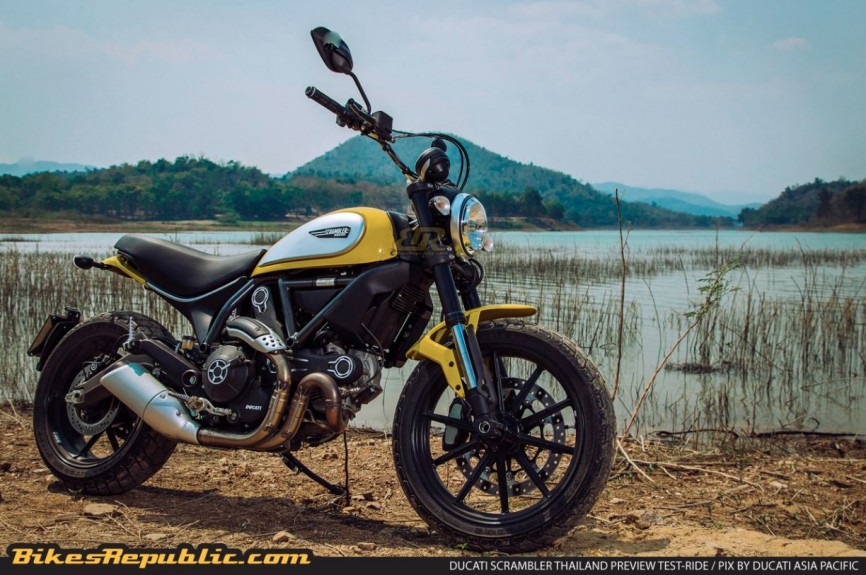 Our first and exclusive first impressions of the all-new and very cool Ducati Scrambler in Thailand. 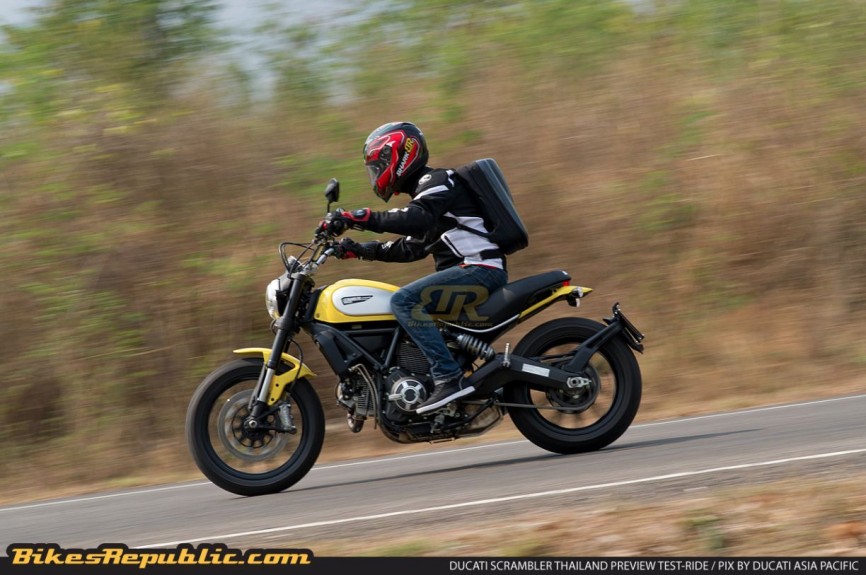 The year was 1962 and as the story went, the idea for the original Ducati Scrambler was born out of a special request from one of the Italian brand’s American dealer called Berliner Motor Corporation. The rationale was for a stylish, fun, and somewhat ‘do-it-all’ kind of bike targeted for the masses. What resulted was a bike that was both distinct and iconic that is matched by only a few. 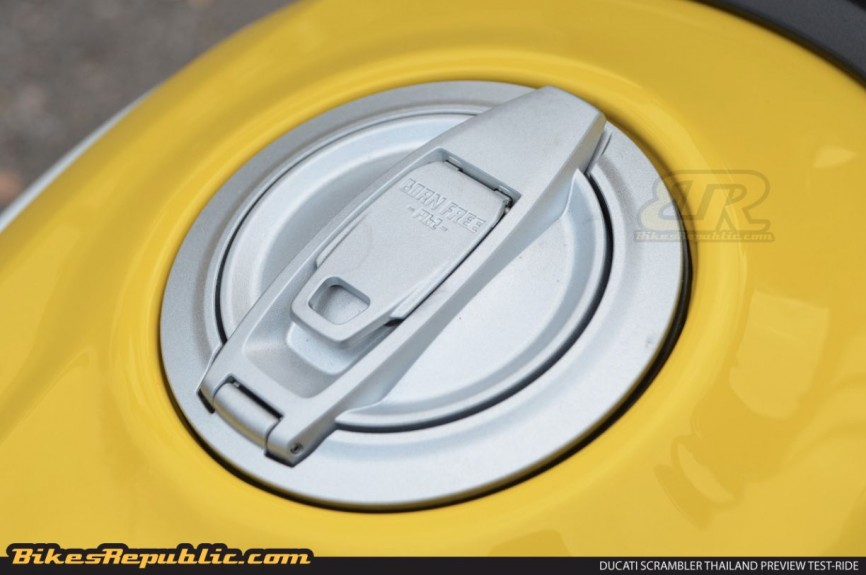 Since its inception, Ducati modified the Scrambler gradually, fitting in its light frame a variety of thumpy single-cylinder engines with displacements ranging between 125cc to 450cc. The original Scrambler was, in a sense, the perfect form of balance between the American and European schools of motorcycling, thus making it one of the brand’s most popular and iconic creations until production ceased in 1975. 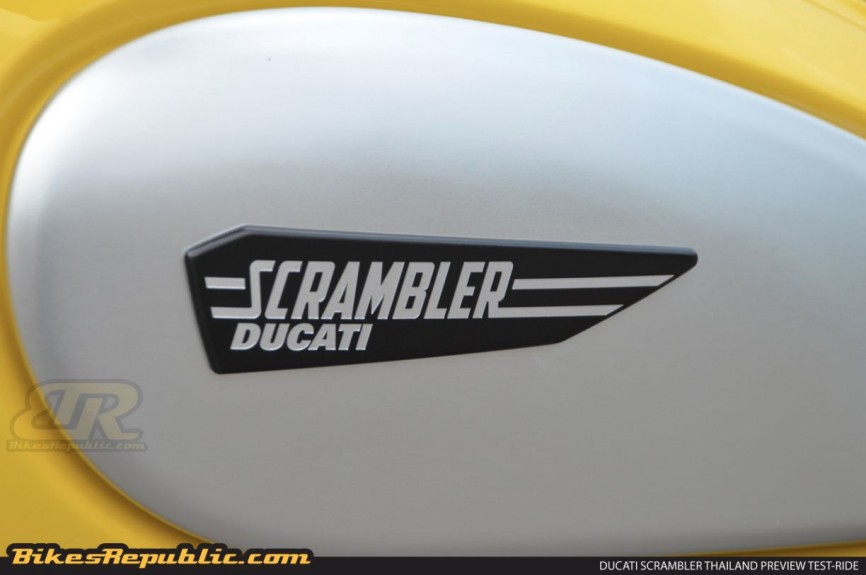 Given the Scrambler’s history and status as a cult icon, perhaps it is only right that Ducati is forgiven for taking almost four decades to come up with a proper successor. And, after a private viewing for the most loyal and passionate Ducatista and Ducatisti during World Ducati Week 2014, the world finally got a proper glimpse of the all-new Ducati Scrambler at INTERMOT 2014. The facial expression of people during both occasions were simple and clear, signalling the fact Ducati have made something truly desirable not just for enthusiasts, but also for the masses. 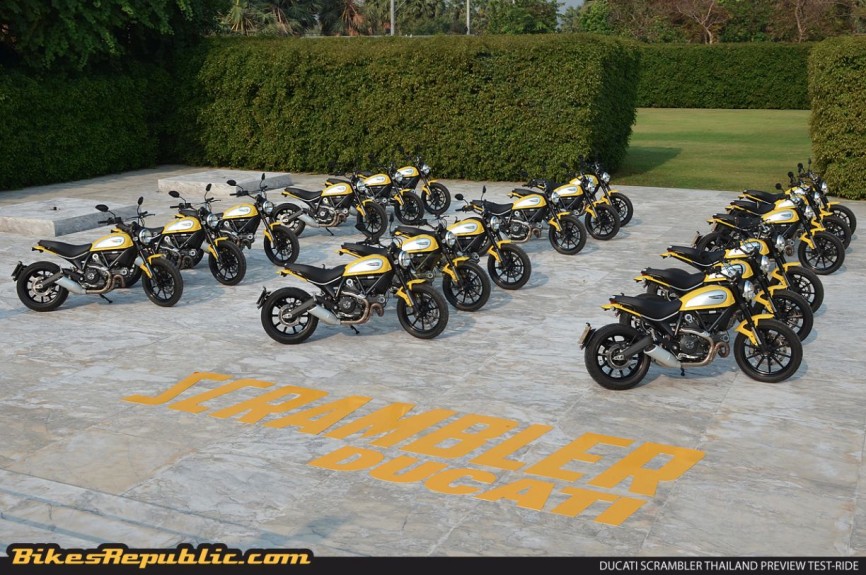 So, when Ducati graciously extended us an exclusive invite to participate in the Ducati Scrambler’s regional preview test-ride in Hua Hin, Thailand recently, we quickly packed our bags and geared ourselves up to test Borgo Panigale’s newest and coolest creation yet. 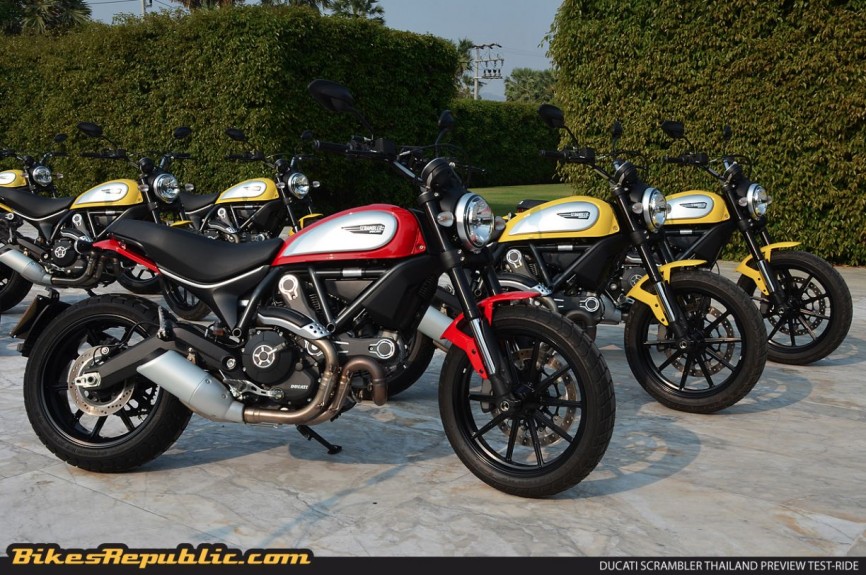 Though there are four variants of the Scrambler altogether, our exclusive preview test ride was limited to just the Scrambler Icon variant. Ducati reasoned that the Icon version stood as the perfect starting point of what the Scrambler range is truly all about. 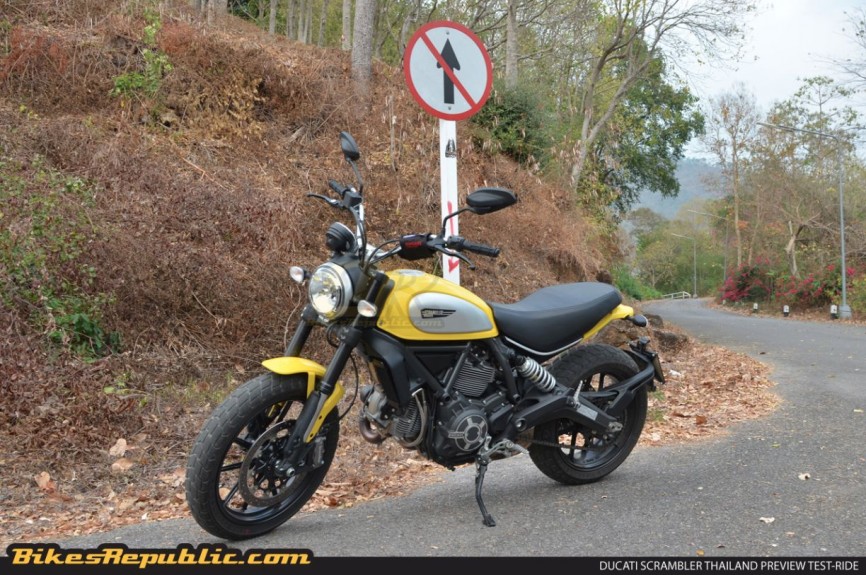 At first glance, the Scrambler has many good things going for it as far as looks go. The classic and retro-inspired base is plain to see, especially with the teardrop tank design, classic single round-shaped headlamp unit and instrument dial, the long and almost-flat bench style seat, high and wide handlebars, as well as the appropriately bright yellow paint with contrasting black accents and trims. 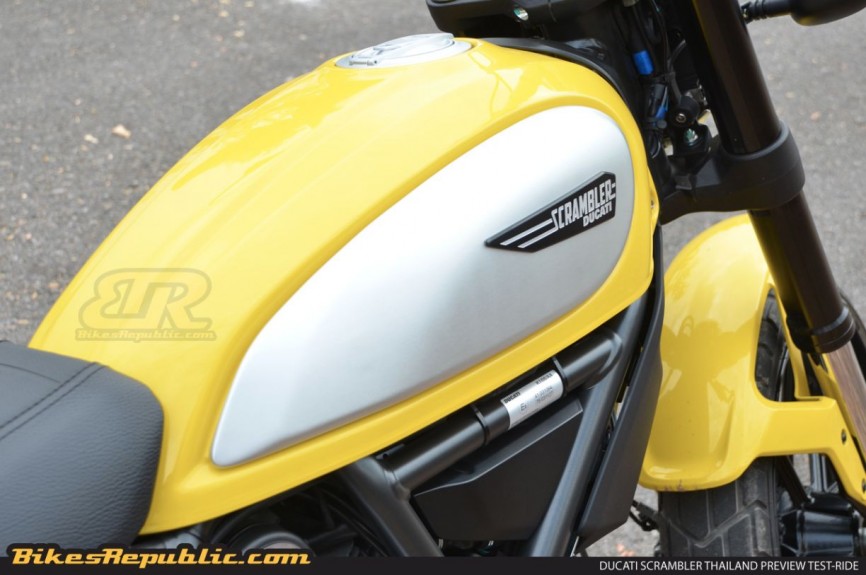 Completing things here are those knobby-looking Pirelli MT60 tyres made specifically for the Scrambler. 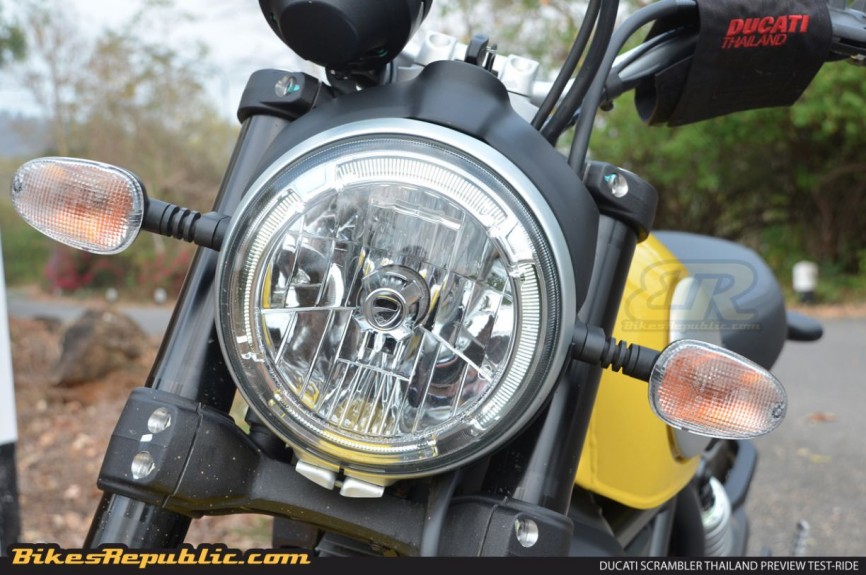 The modern bits only comes to mind once you take note of the LED daytime running lights incorporated in the headlamp, which features an interrupted line that form an ‘X’. Next comes LCD multi-info instrument screen, followed by the LED taillights, and the under-seat USB charging port. 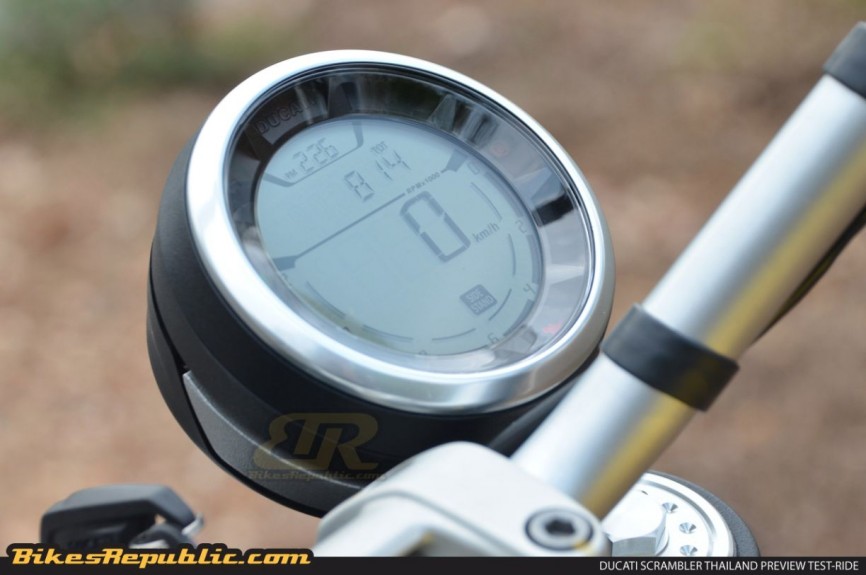 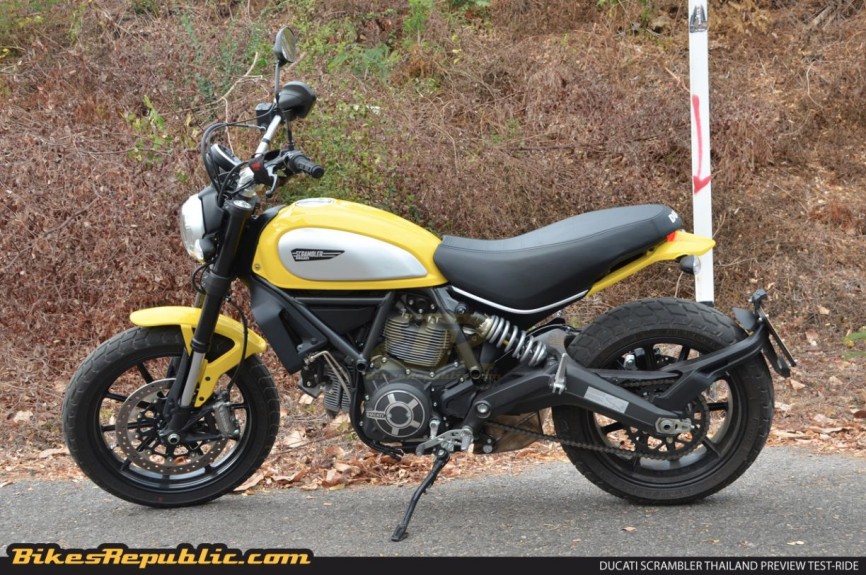 Things feel just as good as it looks as soon as we astride ourselves on the Scrambler’s hot seat. The low 790mm seat height is definitely a welcoming thought, accommodating riders of just about any type and size, and yes, that includes ladies too. That, plus the wide handlebars, dictates a more straight and up right riding position that, as we discovered later whilst on the move, felt surprisingly comfortable. 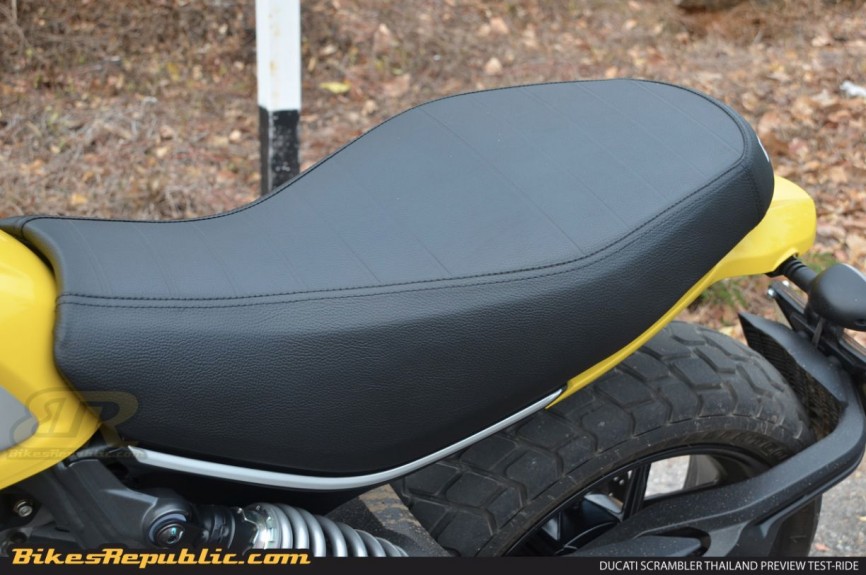 What might need getting used to is the Scrambler’s seemingly compact dimensions. The wheelbase is short at 1,445mm, its width is narrow at 845mm, the stylish tank’s relatively small size and capacity of 13.5-litre, and the weight very light with its claimed wet weight of just 186kg. This resulted largely in part from the Scrambler’s use of a traditional yet very light tubular steel trellis frame design. 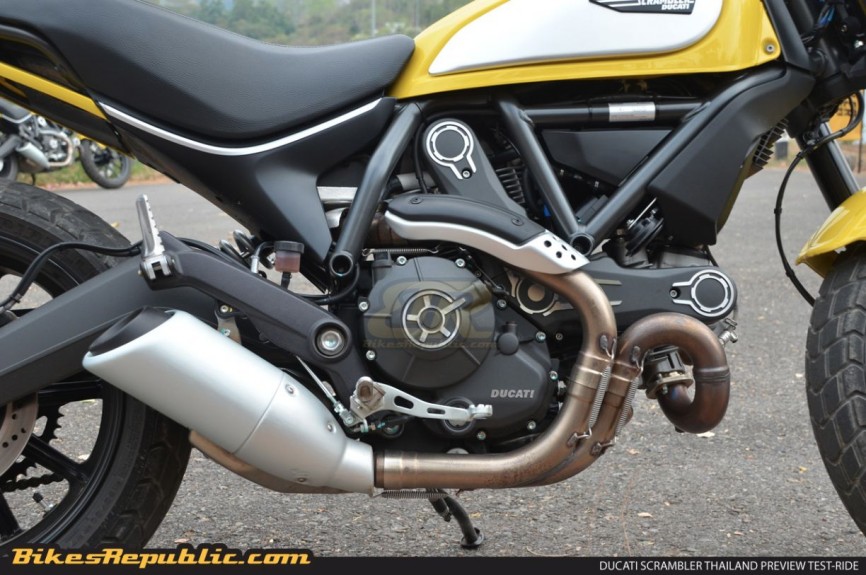 Power comes in the form of Ducati’s air-cooled 803cc Desmodromic L-twin mill primed with fuel injection lifted from the Monster 796. Though it is detuned in the Scrambler’s form to generate 75hp @ 8,250rpm and peak torque of 68Nm @ 5,750rpm, the bike’s very light weight doesn’t need much to get it up to speeds anyway. And the mill’s lack of high-end power is made up for with the its smooth delivery and rich torque in the low to mid rev ranges. 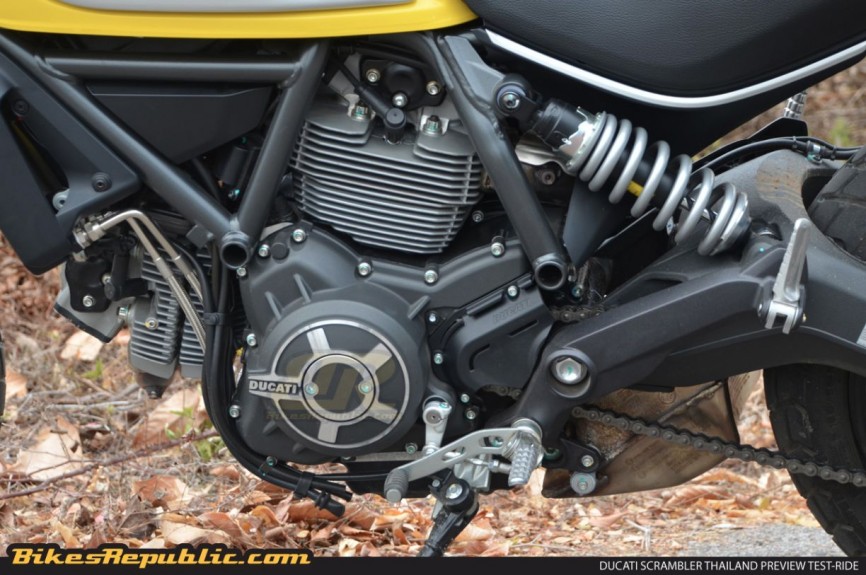 In many ways than one, this air-cooled Desmo L-twin felt like the perfect match for the Scrambler. Our only complaint with the mill is the slightly sensitive throttle response, which may take some getting used to. Thankfully, this little niggle eventually disappears into the back of your mind once you grasp at how easy and slick the six-speed transmission felt. 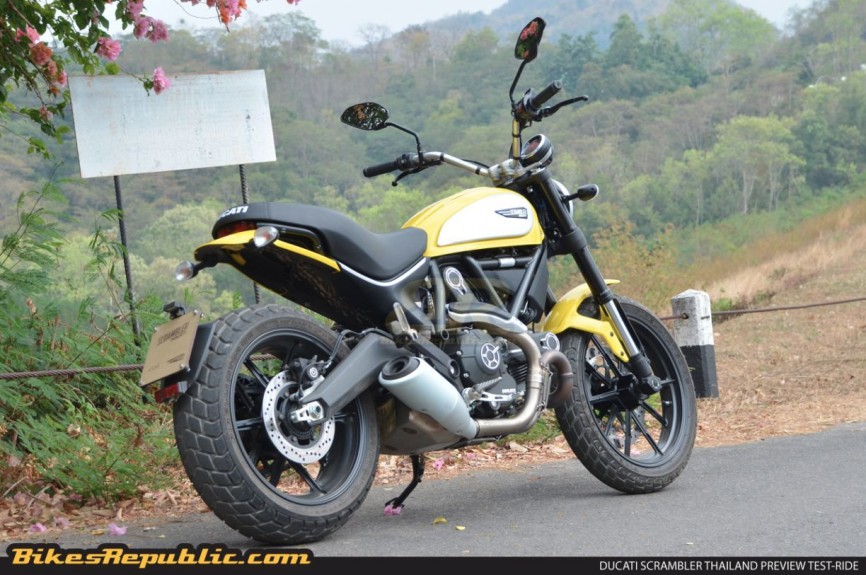 Like the L-twin itself, the gearbox was specially tuned for the Scrambler, boasting a balanced clutch lever pull that isn’t too heavy nor light, and it is matched with a set of very well thought out gear ratios as well. The LCD instrument panel lacks a gear indicator, but mastering the Scrambler’s cogs doesn’t take long and much really. Notably, newbies and amateurs alike will appreciate how easy it is to find ‘Neutral’ in this gearbox compared to the gearboxes found in other Ducati models. 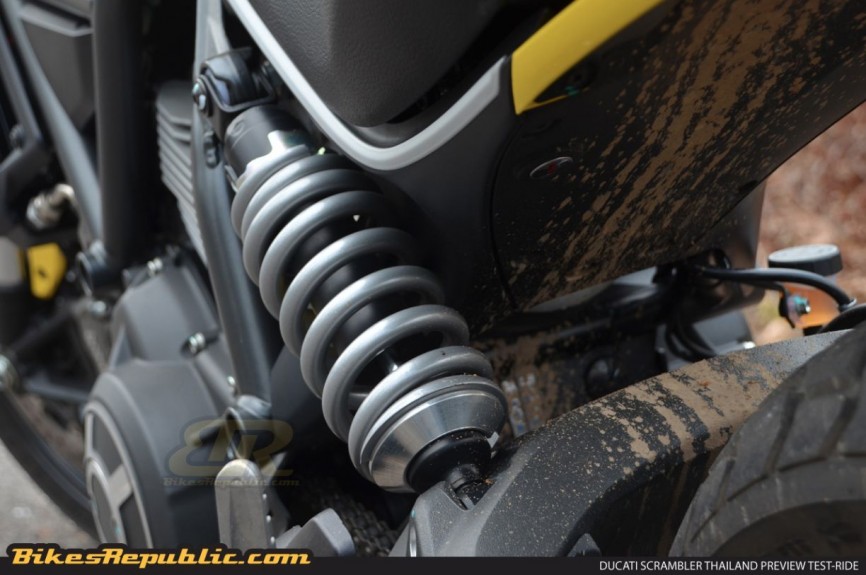 Despite its classic looks, one thing that surprised us greatly was the Scrambler’s on-road handling and manners. The Kayaba-sourced upside-down 41mm front forks, with its matching single pre-load adjustable rear shock mounted off-set to the left, felt rather soft yet balanced with its setup. Merge that with the Scrambler’s light and compact dimensions and you have yourself quite a sporty, agile, and fun-handling bike for both on and off-road use with high amounts of riding comforts. It truly feels like a ‘do-it-all’ kind of bike this Scrambler. 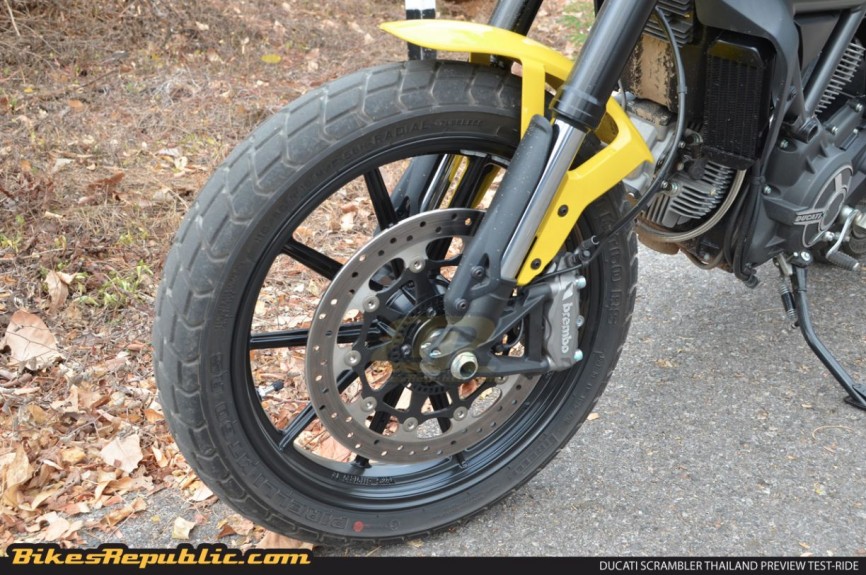 Furthermore, that single disc brake setup front and aft also performed brilliantly. Though it may not sound sufficient compared to other Ducati models with twin floating front discs, the Scrambler’s set of singles felt adequate thanks again to its very light weight, whilst the standard-equipped ABS suite worked excellently at keeping the bike composed and steady whilst under braking. 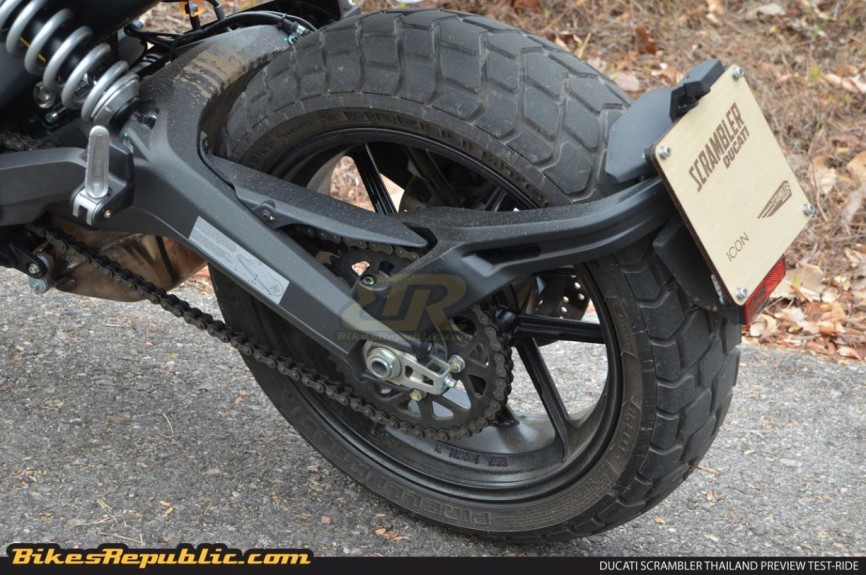 The other surprise is how smooth those Pirelli MT60 tyres felt whilst getting up to speed on the road. Don’t let that knobby groove design fool you either, these tyres actually offer great amounts of grip and traction when tackling corners with the Scrambler. 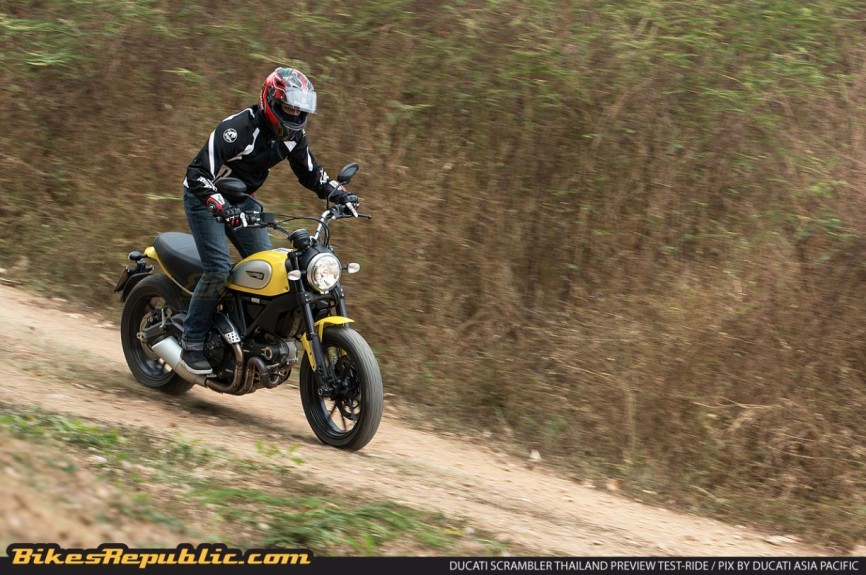 Should you feel the need to hit the beach, or chart down the unpaved gravel or dirt path towards that favourite picnic spot of yours, worry not as these Pirelli MT60 work just as well off-road – a fact we soon discovered a short off-road route in our test-ride. This ability for both on- and off-road riding is perhaps one of the best and most unique of traits the Scrambler boasts. 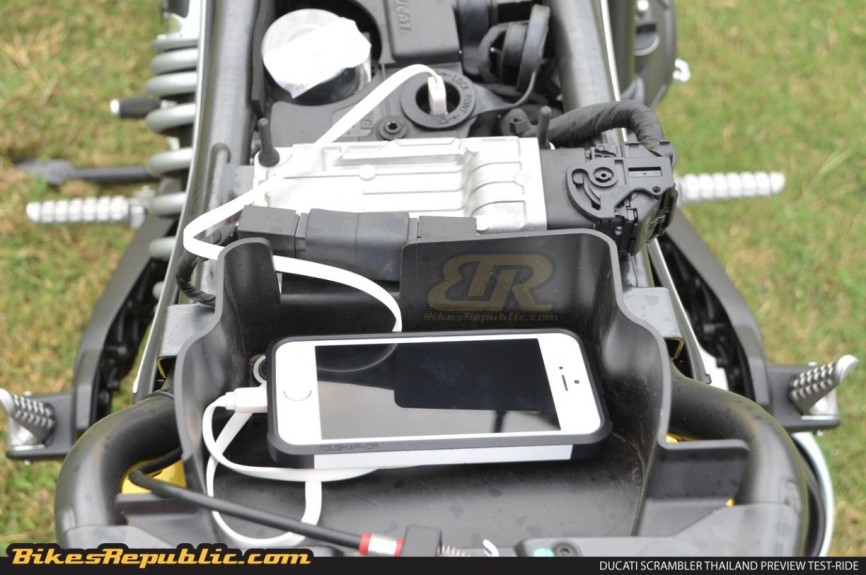 Throughout our 160km-long test ride in Thailand, the Scrambler proved to be nothing short of a pleasant surprise. It isn’t the fastest, sharpest, or the most hard-core bike in the Ducati range, but it is a fun, easy-to-ride, stylish, and somewhat of a very desirable ‘do-it-all’ kind of bike that we know many, purists and non-purists alike, would come to appreciate. 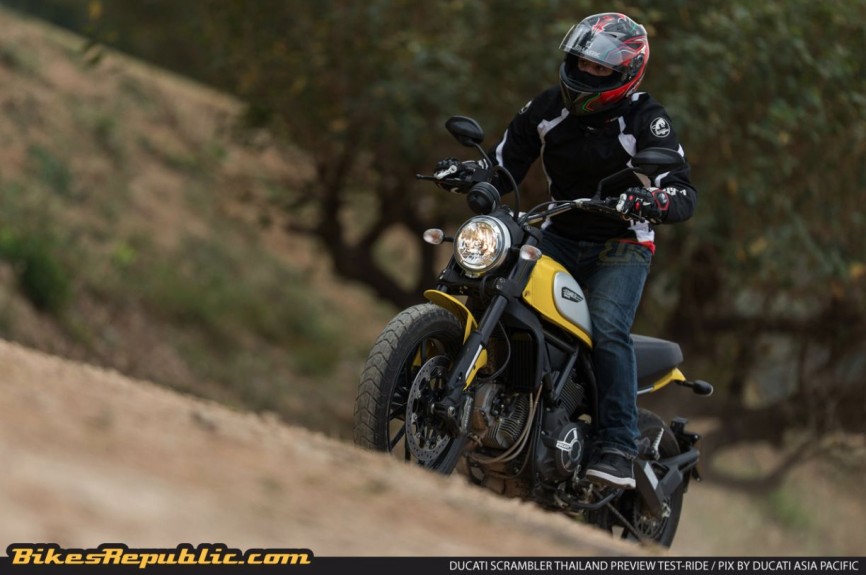 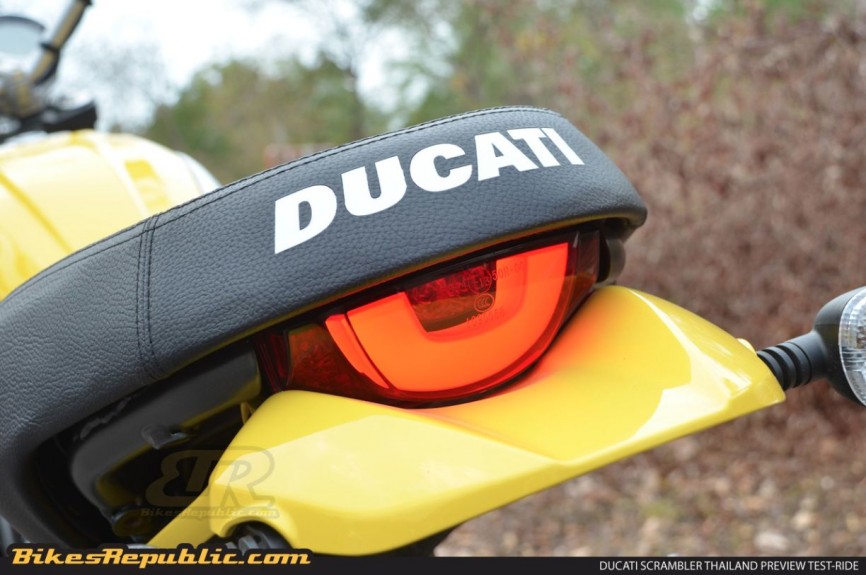 You won’t find one parked in a circuit garage on a trackday. Instead, it is the type of bike you’d fins taking part in ‘The Distinguished Gentleman’s Ride’ convoy, and the kind of bike you’d find parked in front of a swanky and hip social spot like Publika, Mont Kiara. 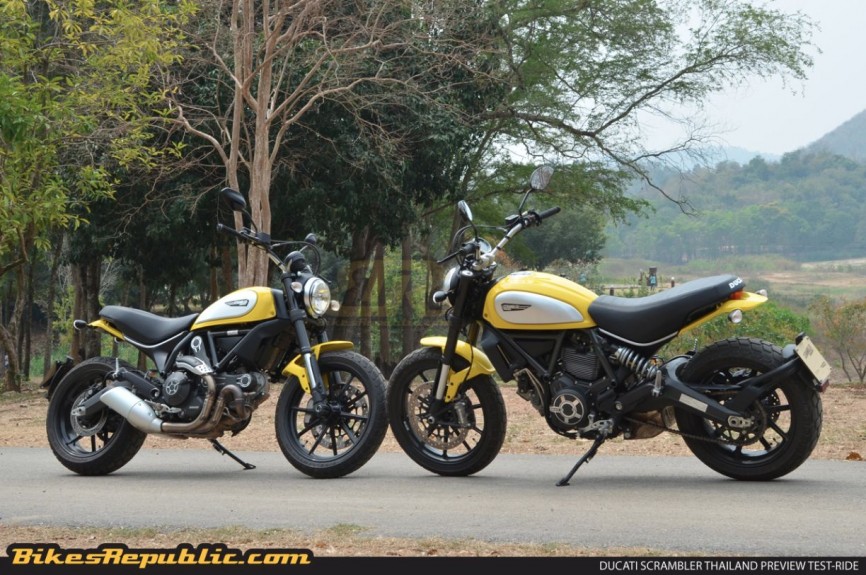 Completing this ‘lifestyle’ approach, Ducati have even gone the extra mile in creating an extensive range of Scrambler-branded lifestyle products for owners to match themselves with. In a sense, the Scrambler is more than just a bike. Ducati is aiming for it to be a lifestyle in its own way, and the brand looks like it will succeed at creating just that. 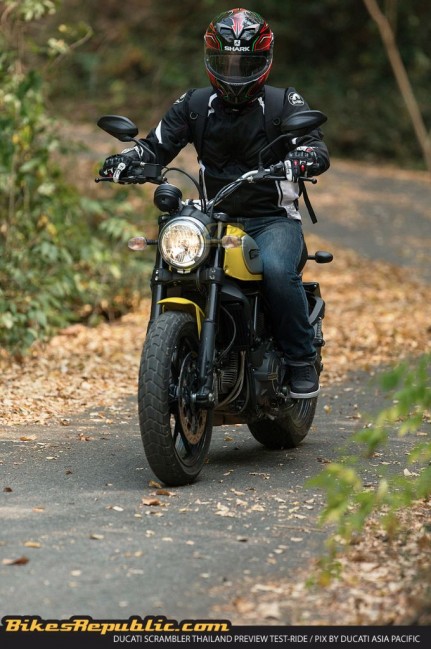 Ducati Malaysia hasn’t confirmed anything publicly just yet, but our insider tells us that the all-new Scrambler will arrive on our soil very soon. The Scrambler models destined for Malaysia will be locally assembled (CKD) in the Italian brand’s Thailand-based production facility. With that, we weren’t too surprised when our insider dropped hints that the Scrambler will carry a somewhat affordable starting price hovering just around the RM50,000 mark. 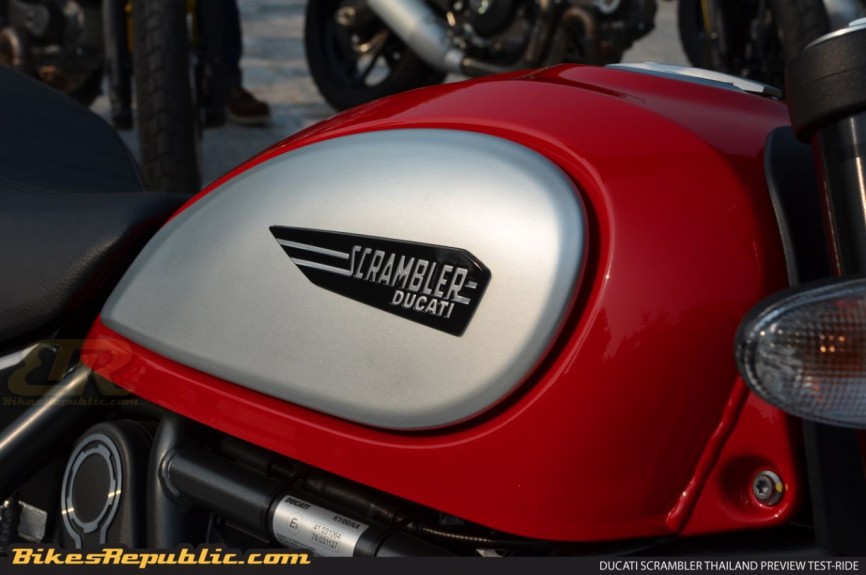 Stay tuned to our site for more updates of the all-new Ducati Scrambler and its scheduled arrival into our market. You can check out more photos from our exclusive Thailand preview test-ride in the extensive gallery we’ve prepared below, or by visiting our official Facebook page as well. 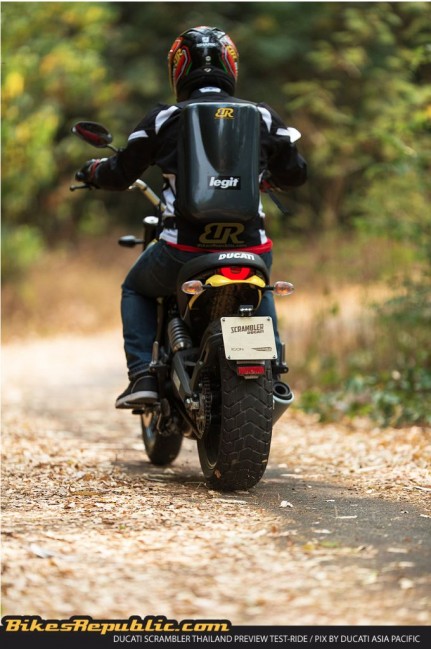