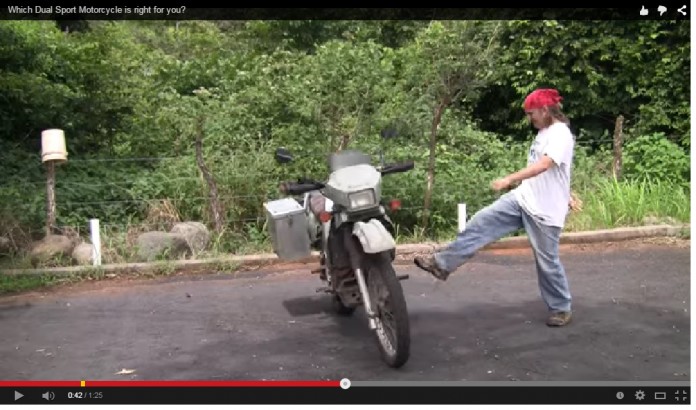 Like you (or its just us), we writers will scour magazines, books and the net to find information, loads of information and sometimes we stumble on interesting things.

I was doing some research for a future biking trip which will involve some camping when I came up to this hilarious video which is titled “Which dual sport motorcycle is right for you?”.

Basically the video shows a guy kicking his Kawasaki KLR hard enough to the point that it tips over and fall on its side. He then go on and explains that one of the main criteria to choosing a DP bike is the kick test (he has a special name for it which is too long) where you know you got the right bike when the kick wont feel as painful, comparing dropping his bike to as to dropping something like a Ducati or BMW.

Technically I agree on his drop test but not because one bike is cheaper than the other but more so that it might survive the fall in better shape or with less damage.

And it does not also imply that the Ducati Multistrada or BMW GS is not going to survive a simple drop but generally the KLR might come out in better shape because it’s lighter thus having less inertia when it hits the ground.

While there are other points to add to the tick list for the DP that is right for you, like big fuel capacity, comfortable seat, heavy carrying capability and such. The drop test survivability or how tough the bike is could be the most important as it might mean the difference between still being able to ride your bike out or walking out of the wilderness after a drop.

So there you go, watch the video and cringe at how the guy nonchalantly kicks his bike. I wont have the heart to do it to my bike, even if its as tough as a tank.

What else would you consider as must have for your DP?