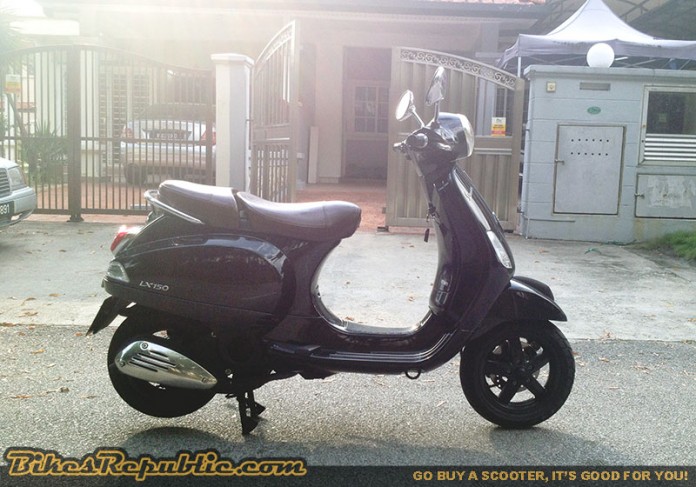 If you have ever lived in a suburban area that was once a calm, peaceful place, that was once on the outskirts of the city and cheap enough for a fresh graduate to live in, and watched it fall prey to over development, you could somewhat guess how this feels.

Even the traffic lights are now just a suggestion, people stop and go whenever they want.

Sometimes, when I’m sitting on my Vespa at the front of the pack, I imagine carrying a Magnum and simply picking off anyone that beats the light. It has to be either them or me; I don’t think they care about me when they beat the red lights, so it’s every man for himself then. But it will forever be imagination.

Imagine then driving from The Curve to Sunway Giza, a distance of just three point something kilometres, and a journey that takes about five minutes at four in the morning when there’s no one else on the road. But during the day, it has taken me over an hour to get across that. Imagine the frustration.

The traffic is getting so bad these days that it’s simply unbearable anymore. Sure after spending a good amount of my adulthood stuck in traffic, I now have the patience level Buddha himself will be proud of, but there’s just too much time being wasted stuck in traffic. It’s unacceptable for some of us.

The MRT project is good and all, but it makes me wish that I could sleep and wake up in 2016, the year when construction is expected to end. The collateral damage is just too much to handle. And then you have to ride or drive under a beam that seems to be loosely hanging in the air, defying physics. People have died, and that is very very f**ked up.

I never had my car towed before, but I see plenty of bad days for people. And apparently you have to pay a hefty fine, go through the hassle of showing your “geran” (ownership papers), and deal with cocky tow truck drivers. It’s a risk that doesn’t make sense to me, so I rather take as long as it takes to look for a parking spot. And that takes a lot of time, sometimes. On the scooter, the world is your parking lot.

I have also grown fond of splitting lanes!

Drivers, I don’t know about the rest, but I am silently snickering at you as you sit stuck in traffic, Facebooking, making up, making out, texting, day dreaming, talking, arguing, reading. And yes, we lane-splitters also notice it when you’re touching yourself. Or when someone’s touching you.

It takes me 45 minutes to get to office when I drive. It takes 20 on the scooter.

You know when you buy a new car, amongst the many things to take into consideration is the cost of the road tax, and how much fuel it consumes? We Scooter people don’t do that.

RM2 for road tax, and RM10 for a full tank of petrol (Range: 150km) is, and I’m saying it with every inch of humility, negligible. I know and respect the fact that there are people for whom RM10 is a big deal.

But this is one of the reason’s why I bought a scooter, because it is cheap, convenient, quick, hassle free and it just makes so much more sense than a car in 2014 KL.

I also know that the weather in KL sucks, and there’s a lot of pollution, but it’s a small trade off. Something you will appreciate when you make it home in time to have a cup of coffee just as the sun is going down. There’s time to work out, have sex, a good dinner, read a book. There’s time for the good things in life.

Yes it’s dangerous, so car drivers here’s a personal plea; please, move to the right or left when you’re coming to a stop, just to make space for us to ride through. We are going to try to make our way around you anyway, so you might as well help rather than risking us swiping your side view mirrors.

When the red light appears, please stop. You don’t have two more seconds, it means stop! When motorcyclists see green, we go for it. What else do you expect us to do? Sit around and wait for someone to horn at us? It’s green, it means go! It’s red, it means stop! This is someone’s life we are talking about here.

You should thanks us motorcyclists actually. As of 2009, there are close to 10 million motorcyclists on Malaysian roads. Can you imagine if all of us lost our minds at the same time and went and bought cars instead? You’d be screwed! There will be too many cars on the road that we would all have to go back to riding horses. So, you’re welcome!

It has been about two months now that I have been ‘scooting’ about everywhere. When I bought it, I told myself that I would only ride it to the shops and where it was convenient. But it turns out, it is so convenient that it is difficult to justify driving the car anywhere, except for when it rains.

Sure there are nicer bikes out there that are just as convenient, but trust me when I say that a scooter is much better in urban conditions than having to balance a clutch, and having a big engine slowly burning your nuts.

But don’t believe what people say, scooters don’t get you the girls. So there’s still a need for cars. So there.