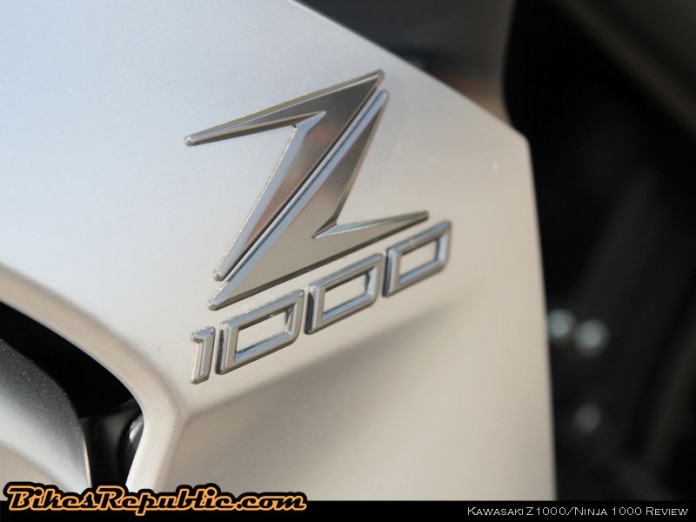 Spending a day decoding the brand new Kawasaki Z1000 naked and Ninja 1000 sport touring in and around Langkawi island. By: A. Pfordten 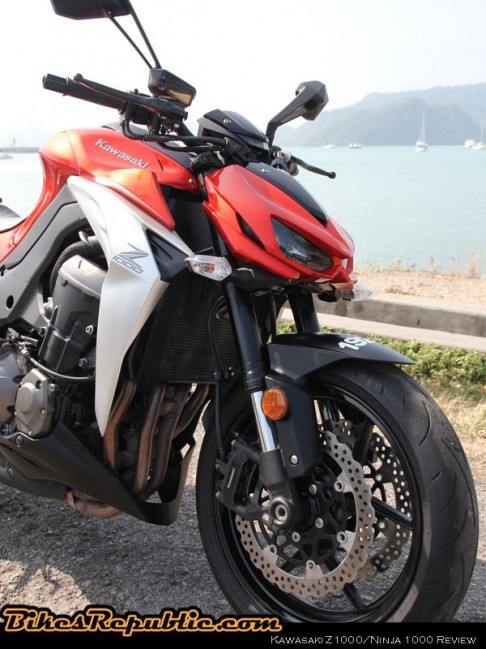 As the sun’s rays reflected off the Z1000’s intricately chiseled body lines and curves, it was clearly enough to get my mind filled with nothing but excitement and a hint of anxiety. After knowing how mighty and raw its last incarnation was, you would understand as to why my anticipation of this latest generation Z1000 was clearly very high as I slowly walked towards it in the carpark with my full racing suit donned and zipped up. 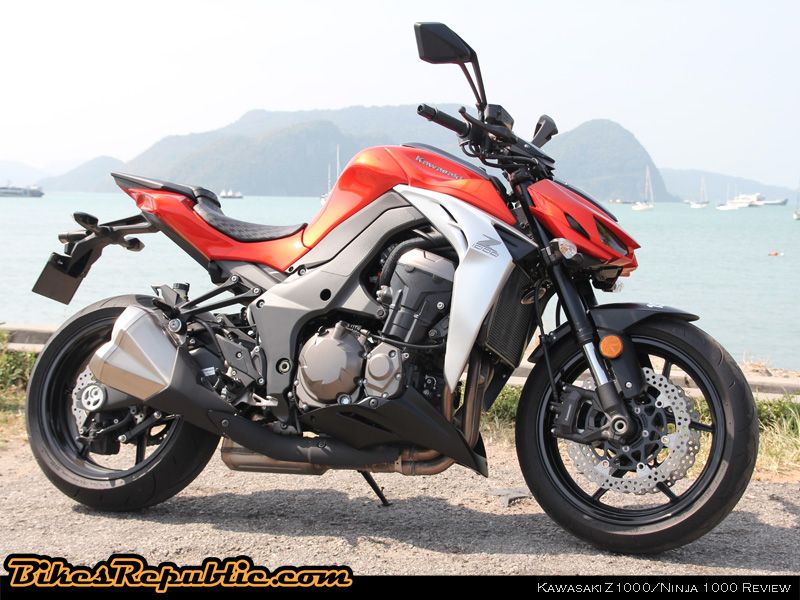 Before that, here is little bit of a back-story. The previous day, a briefing was held, and as usual, the group of invited journalist I was present with in the swanky hotel was presented with a customary powerpoint presentation. Then, the man who dutifully goes through slides brings up one of the slides with the Z1000’s picture in it, paired with the following caption about the bike’s new concept: “Sugomi can be seen in the crouching form of a hunting predator as it gathers energy in preparation to strike, muscled tensing in anticipation, eyes locked onto its prey. The Z1000’s sugomi design borrows from the predator’s fiercely intense glare and a dynamic form that radiates with the promise of explosive action.” Naturally, this got out attention greatly, followed by an awkward pin-drop silence in the room. 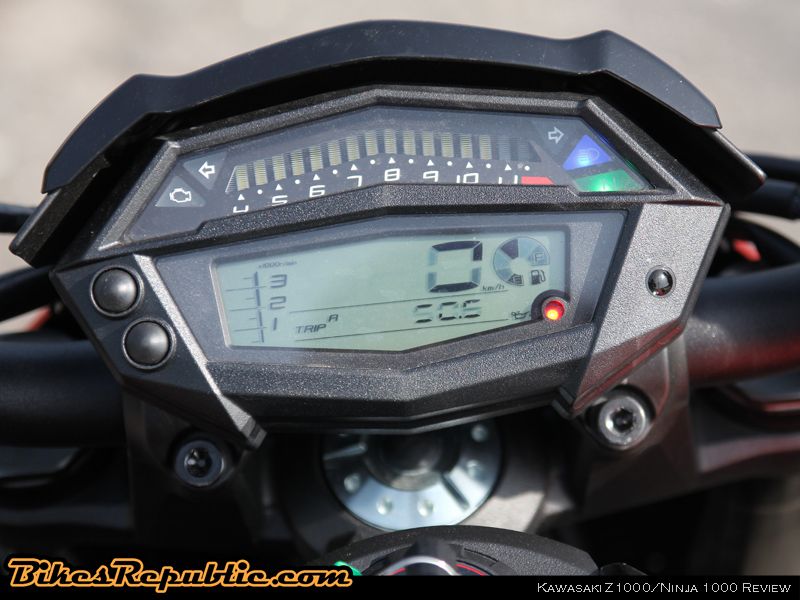 Returning back to the previous paragraph, I now found myself astride this beastly looking naked in front of me. It is an exquisite piece of Japanese engineering if I were to be honest at describing it. But more importantly, this new Z has seemed to reach a new level in the model’s line progress. With this new bike, Kawasaki have opt to simply throw ‘practicality’ out of the window in favour of a design that is simply outrageous and un-Japanese. 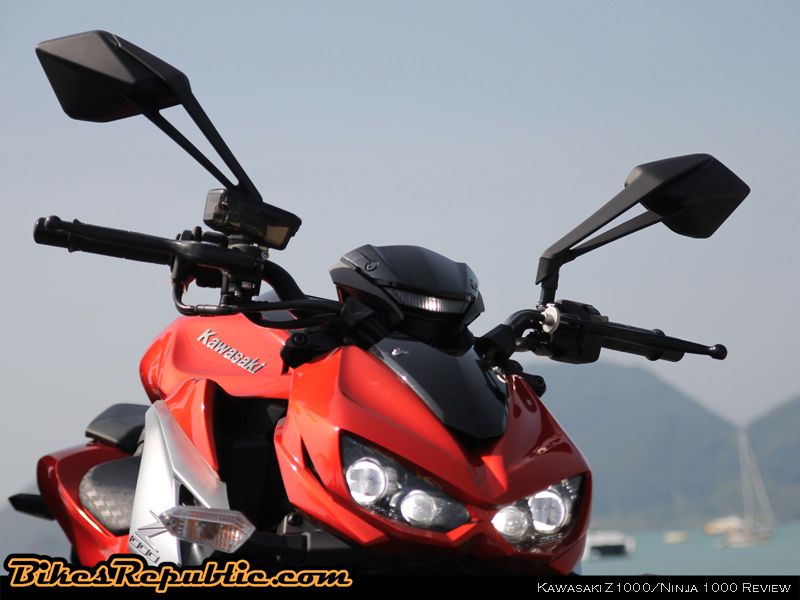 Like a predator waiting to pounce, the new Z’s headlamp area now sits lower and looks much sleeker having its LED lights shining through the cowling like a pair of eyes locked-on to a prey. The affect? The bike’s design boasts Japanese Manga-inspired looks and stance, resembling that favourite Gundam robot you once had as a child in your room. 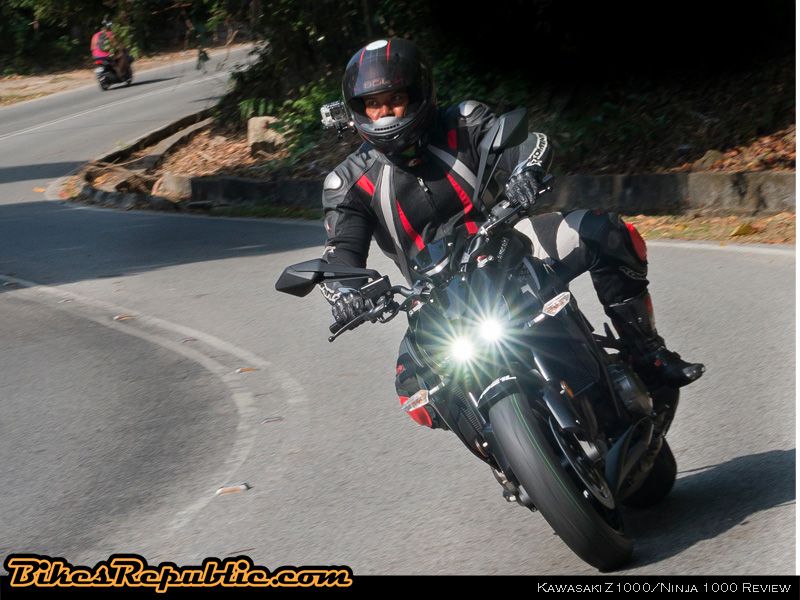 Compared to its previous iteration, the ergonomics are similar, but this new Z1000’s dramatic frontal area design feels a lot more exposed to the elements, resulting in an almost perfect and un-obstructed forward view. Matching the sci-fi theme of the bike’s overall design is the digital instrumentation unit fitted. The layout is bespoke than most, having the first 3,000RPM displayed on the main panel before progressing onwards to a set of horizontal LEDs displaying the 4,000 to 11,000RPM range. 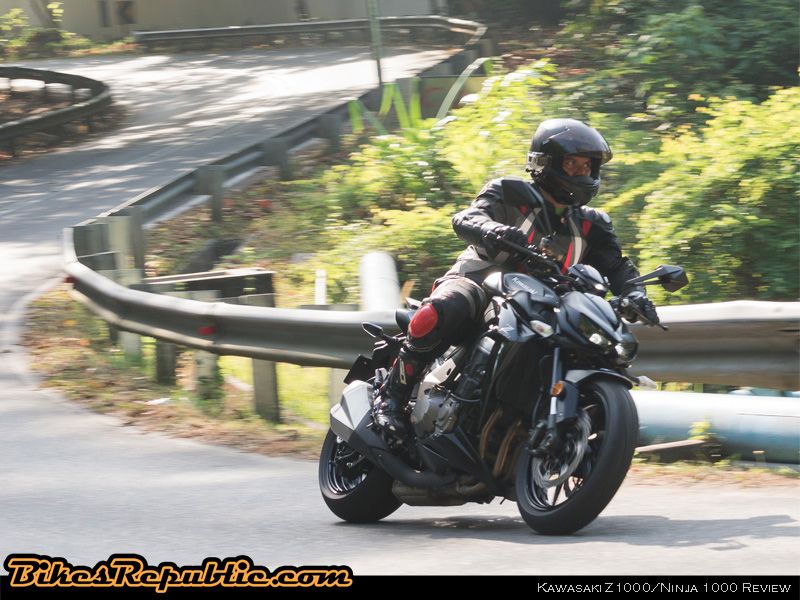 As cool and practically readable it may be, I strongly feel that an analogue type unit would have suited this new Z1000 better, but that would undoubtedly ruin the aforementioned sci-fi design theme. Our other complaint here was the somewhat mediocre feel of the plastics used, and its overall build and finish. At this point, my mind was saying that perhaps the bike’s performance and feel on the road would do well at countering this. 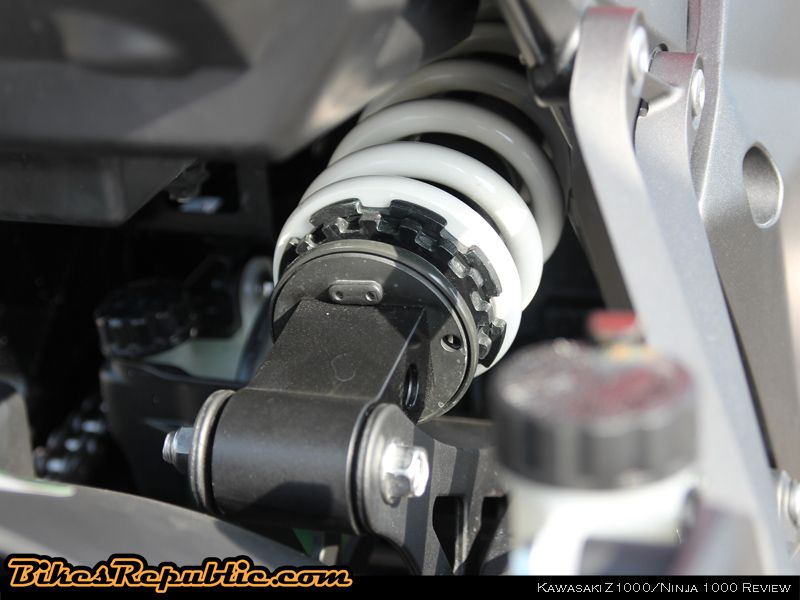 And true enough, it did. The first chance I got to crack that throttle open, the Z1000 dutifully responded with the engine howling deeply, followed immediately with light speed acceleration. In other words, the delivery was instantaneous. This 2014 Z1000’s engine has gone through a rework from its last form, primed with a new cylinder connecting passageway, a new cam profile, new bore and stroke dimensions of 77x56mm, as well as an updated set of ratios for the six-speed transmission. 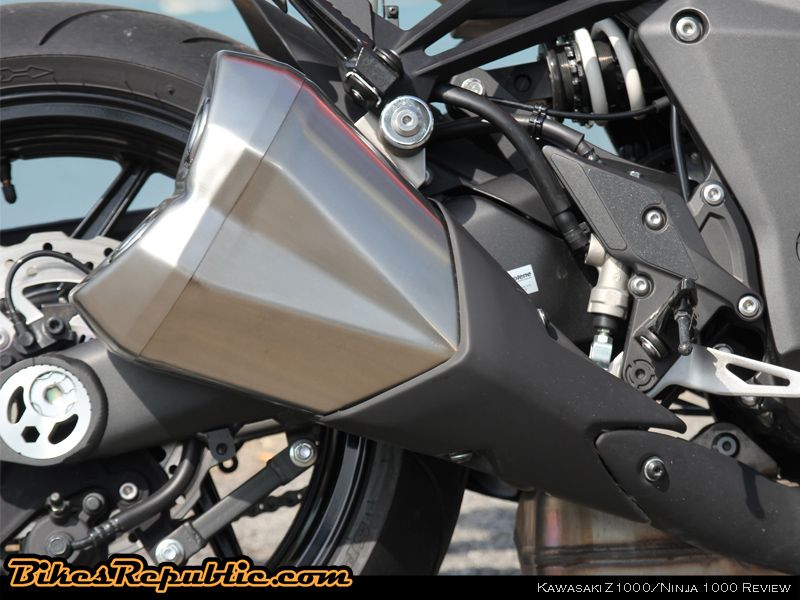 Unlike its predecessor, pumping losses in the new engine’s mid to high ranges has noticeably reduced, so did the low to mid-range torque delivery. The engine now possesses better balance between peak power and low to mid-range versatility, whilst the shorter gearing meant quicker acceleration, rounded off with a taller sixth gear ratio improving highway comforts. Another interesting note is the tweaked airbox, giving this new Z1000 a much more prominent and distinct intake snarl. 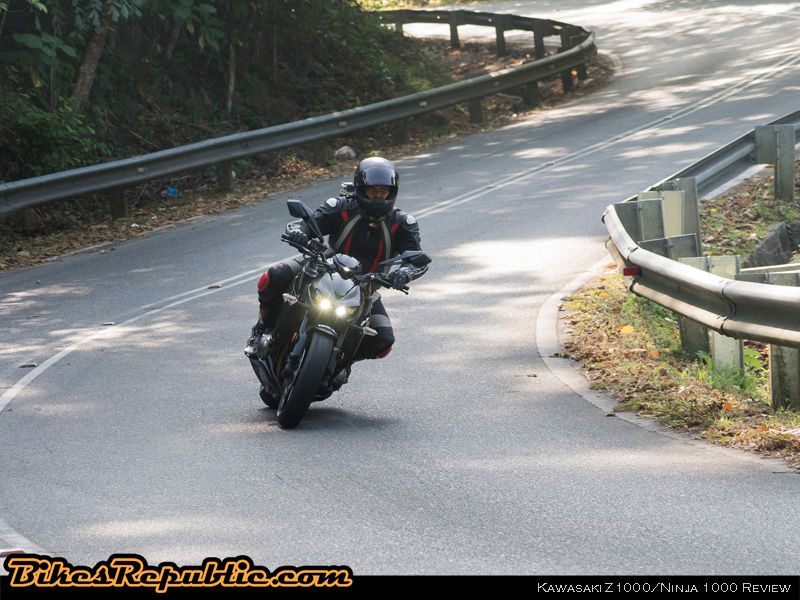 You may think Langkawi’s roads may have been an odd choice, but trust me, they proved to be a perfect proving ground for this new beast. Racing the Z1000 deeper into the interior of the island, the Z1000 proved its mettle there, leaning precisely and predictably into the series of consecutively tight corners. The new suspension now feels significantly taut, set up for sports riding. Kawasaki even added a “separate function fork, big piston” (SFF-BP in short) similar to the ones primed in the ZX636. It has springs on both sides with preload adjustability in the left tube and damping in the right tube, granting the new Z1000 with an even more precise steering ability. Matching it are a set of new Tokico twin monobloc 310mm front brake discs with quad-pistons per caliper, throwing the bike around corners becomes effortless. With that, my speeds as I raced towards the island’s interior gradually got higher and higher.

Predictably, the Z1000 feels very stable at high speeds. Countering the windblast are the forward canted seating position and low handlebars, whilst those powerful brakes and predictable suspension feel mentioned earlier exuded high confidence levels. Langkawi may not have a lot of high-speed sections, but the few it had did indicate clearly as to how this new Z1000 would easily cruise on highway rides. 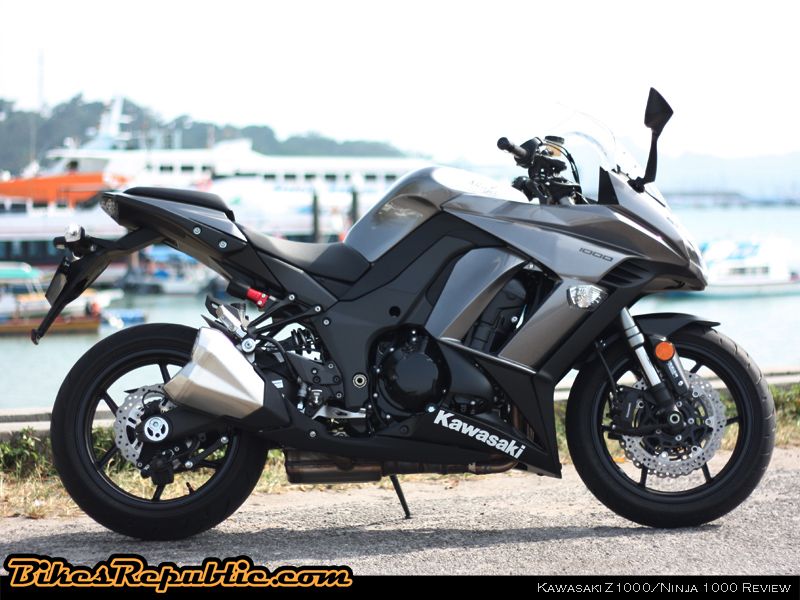 Switching from the Z1000 to the Ninja 1000 (known previously as the Z1000SX), things started to soften a little at first. On first impressions, the Ninja 1000’s full-fairing and traditional sports touring creature comforts is a far cry from the Z1000’s radical approach. And you feel that as you lay your eyes on the bike’s traditional analogue instrumentation where despite loosing out on its sibling’s cool factor, I feel it is less of a chore to read than the digital unit found in the Z1000. 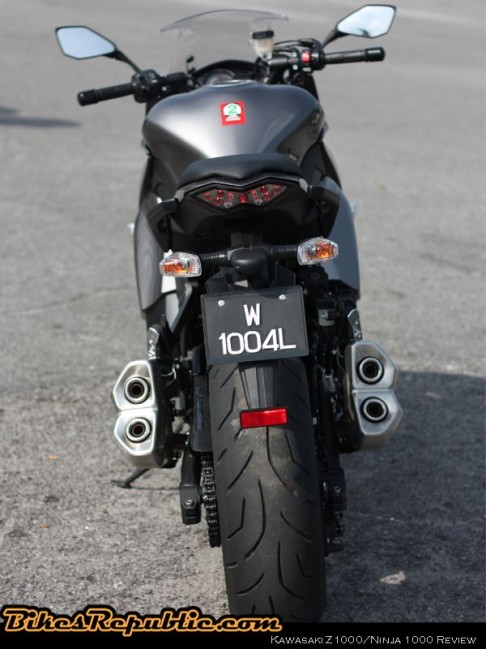 Besides that, the Ninja 1000’s headlights and front fairing resemble closely to the ER6F or US-spec Ninja 650 or the 250R even. Naturally, one would associate the new model as the biggest sibling in the Ninja range, until you give the throttle a good twist that is. From then on, the Ninja 1000’s ‘modest’ and full-faired cloak is shattered, revealing its naughtiness similar to its naked sibling. 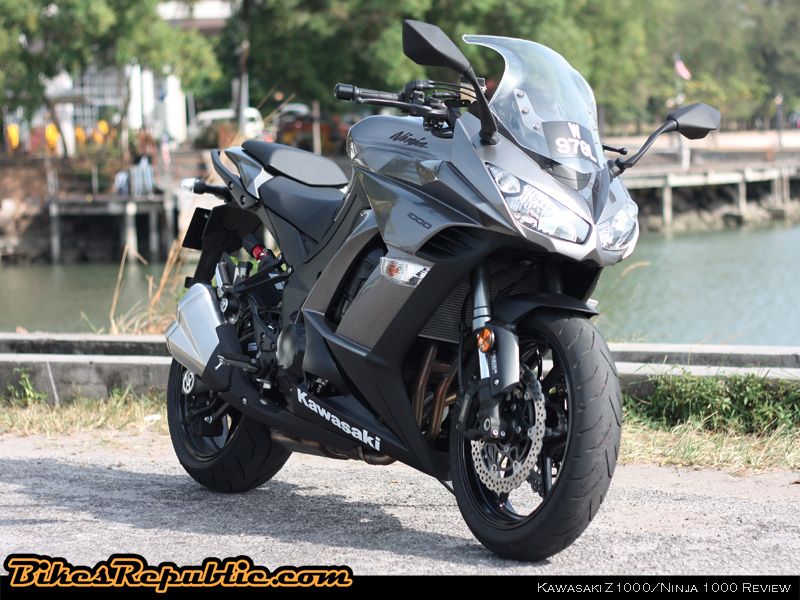 Underneath, the Ninja 10000 and the Z1000 share the same high-revving one-litre heart. The Ninja however is primed further with KTRC (Kawasaki Traction Control system) that grants riders with three selectable riding modes. Additionally, it also offers selectable power modes that allow you to select either full power or 70 per cent power. 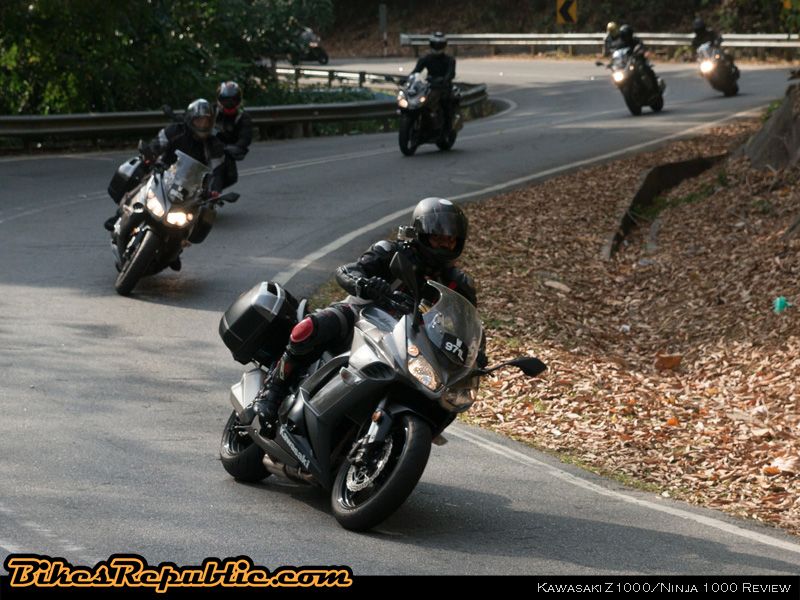 Racing out of the interior on a reverse loop of the previous course, it was easy to see why the Ninja 1000 commanded high respects as its naked Z1000 sibling does. The only thing dulling the Ninja 1000 down from its sibling are the full fairings equipped. The bike I test-rode came standard with hard panniers. They fit seamlessly, something you would clearly notice as you take them off and find no visible mounts to upset the bike clean lines. 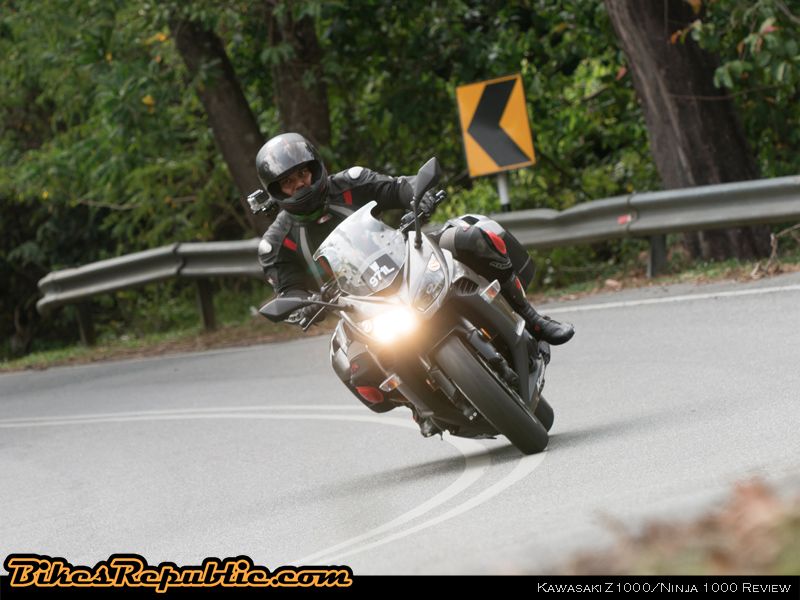 The same can be said with the suspension between the two. Unlike the Z, the Ninja 1000 is laced further with a remote rear spring preload adjuster granting quick tuning for passenger and luggage weight adjustments, while the added ABS brakes comes as standard equipment. After tearing around the island’s finest stretch of asphalt, it became highly apparent that the Ninja was just as quick as the Z1000. If its long distance touring with luggage capacity you were looking for, then the Ninja 1000 would be the perfect choice. 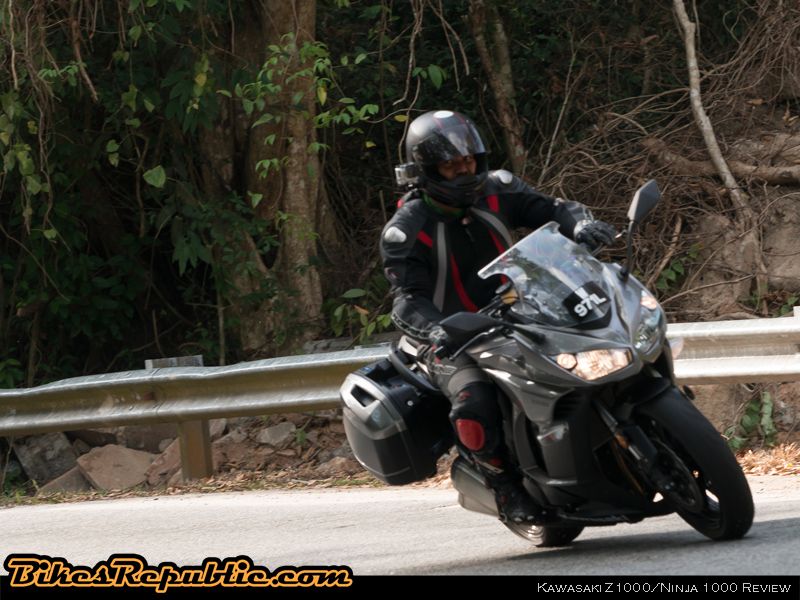 Available in our markets now, the Z1000 retails starting from RM76,900 while its Ninja 1000 twin is priced from RM82,900 sans pannier and RM87,900 with panniers. Honestly, both bikes will impress their respective buyers greatly. But, no matter which of the two you adopt, you will definitely ride either with some “Sugomi” style. 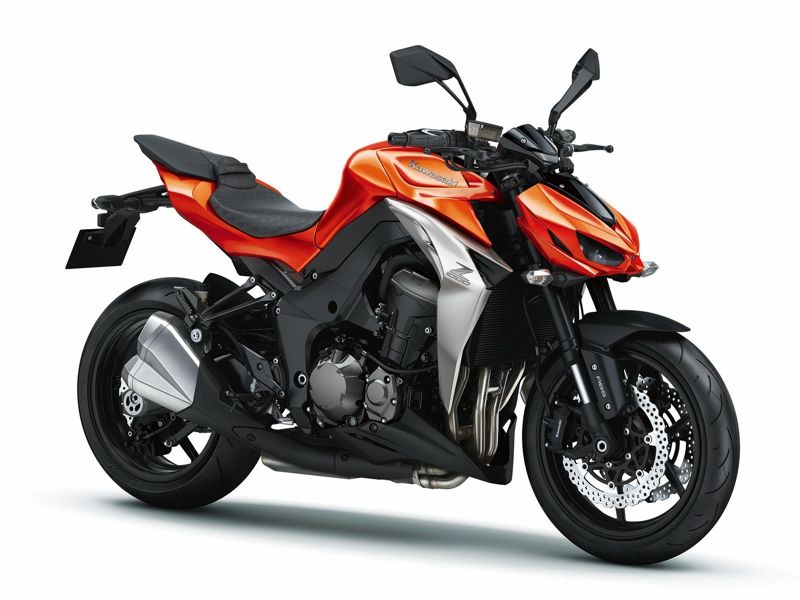 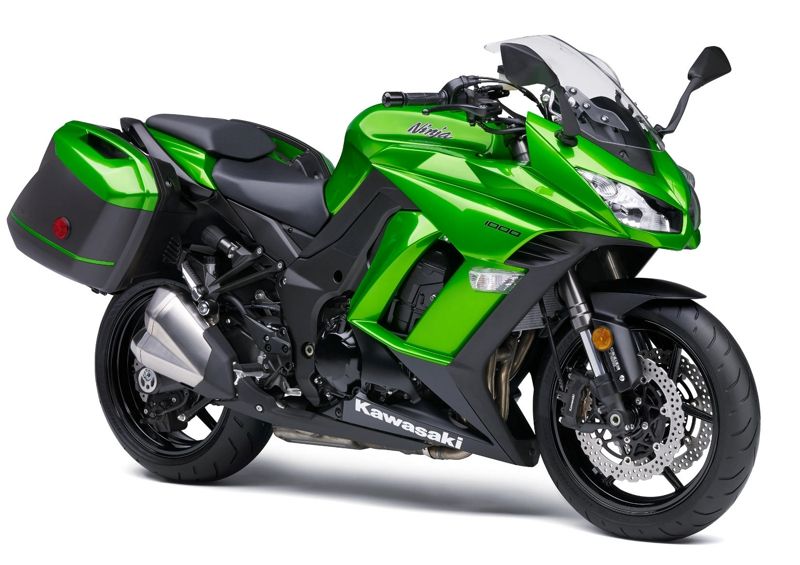 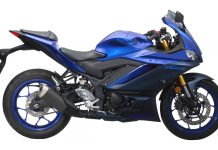 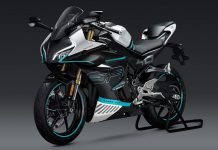 CFMoto 450SR To Debut In Malaysia On October 22