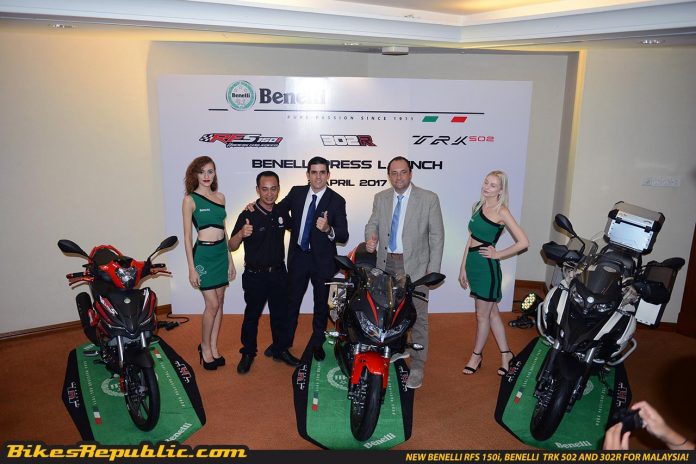 Benelli Malaysia, which is operated by M Force Bike Holdings Sdn Bhd, today took the covers off its first ever underbone, or better known locally as a kapcai, model – the RFS 150i, making Malaysia the first country in the world to have the underbone/moped/kapcai on sale in its market.

Besides that, the company also introduced two other models, the 302R sports bike and the TRK 502 touring bike. All three bikes mark the Malaysian resurrection of the Benelli brand under a new stewardship from M Force Bike Holdings, and the company seems to know what the market wants and is confident of strong sales and a good aftersales service through its network of dealers nationwide.

We will save a thorough review until we have rode all three bikes tomorrow, so for now, these are the what the three bikes have to offer: 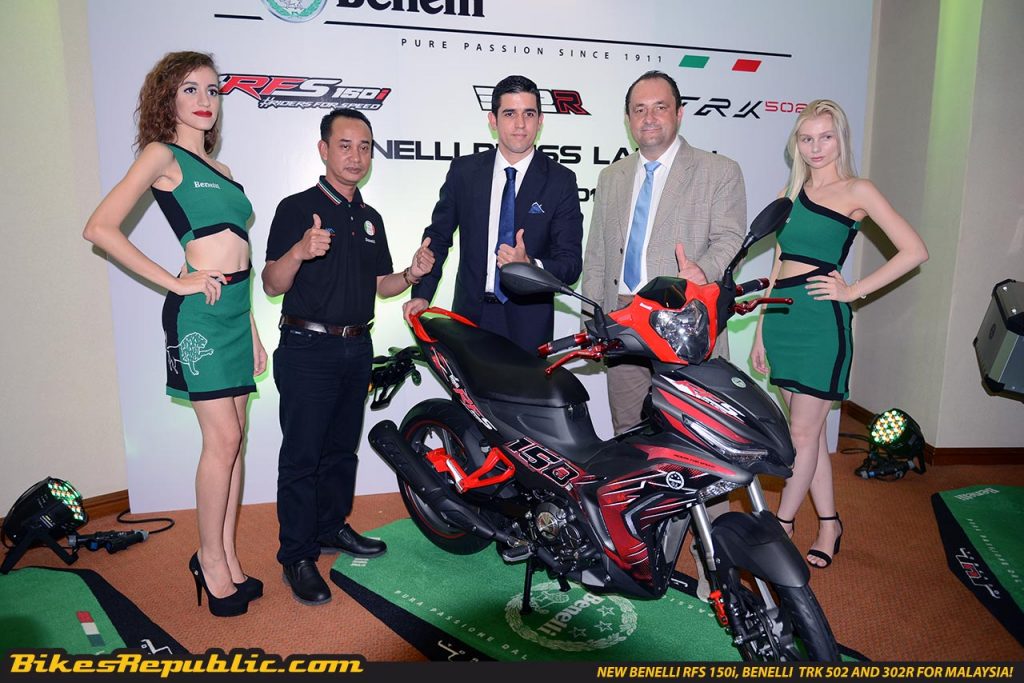 The RFS stands for ‘Riders For Speed’, and Benelli in its press release says the RFS 150i is a race-spec underbone sport moped motorcycle which balances Benelli engineering standards with Italian racing style. 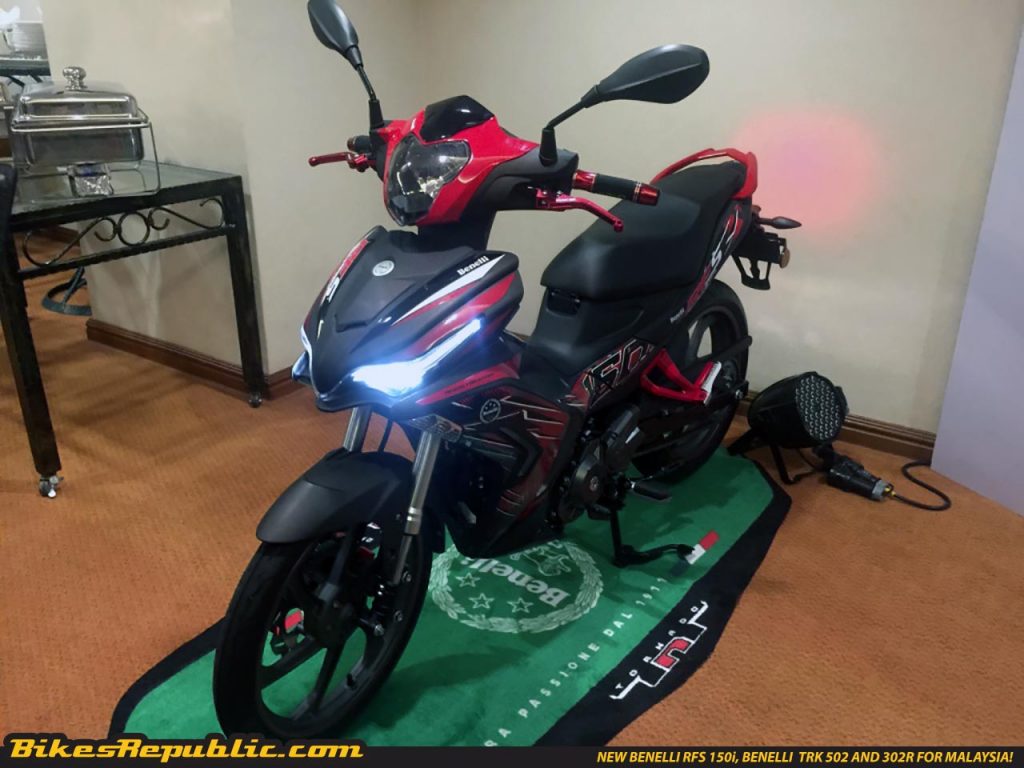 It is powered by a liquid-cooled, single-cylinder SOHC engine with four-valves and Benelli’s latest B3SP three spark plug technology. It puts out 15.5hp at 8,500rpm and transfers power via a six-speed gearbox with a wet multiplate clutch. 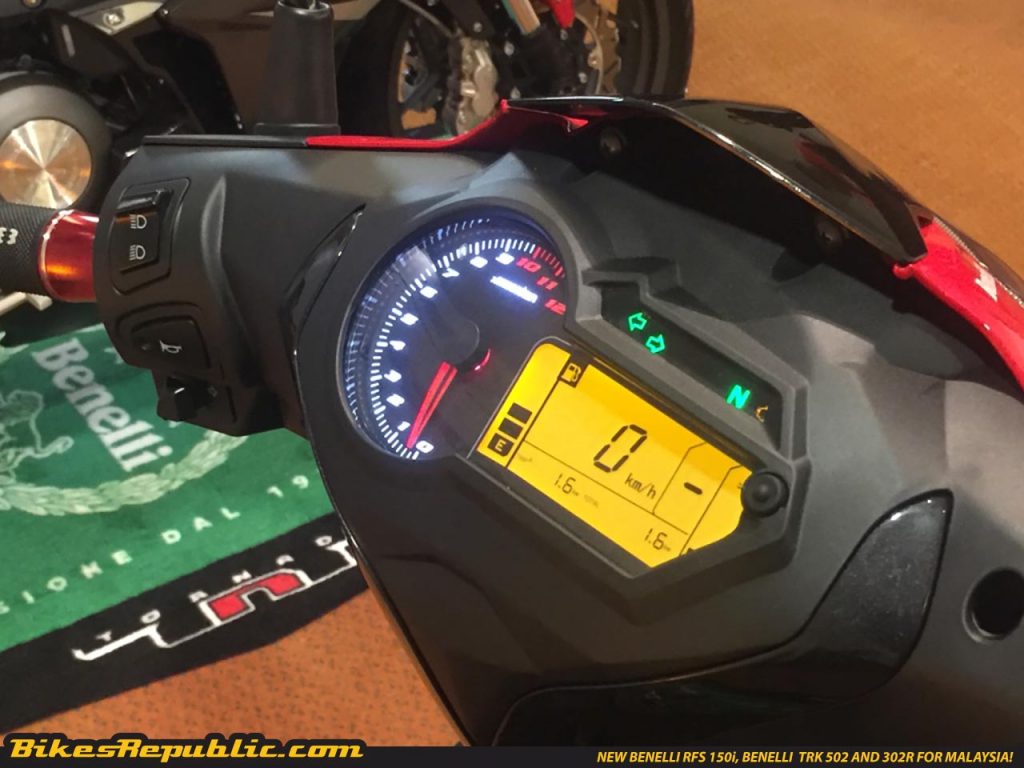 You must be wondering why this bike needs three spark plugs, and so were we, but Benelli explains that it’s B3SP ‘3-Spark’ system uses the three spark plugs together with the bike’s ECU and fuel-injection system, to modify engine timing and plug usage to maximise power, keep engine temperatures down to a minimum, which thus optimises fuel efficiency and minimises emissions. Three spark plugs also ensure an even and complete detonation of fuel, which means better performance, efficiency with lesser environmental impact. 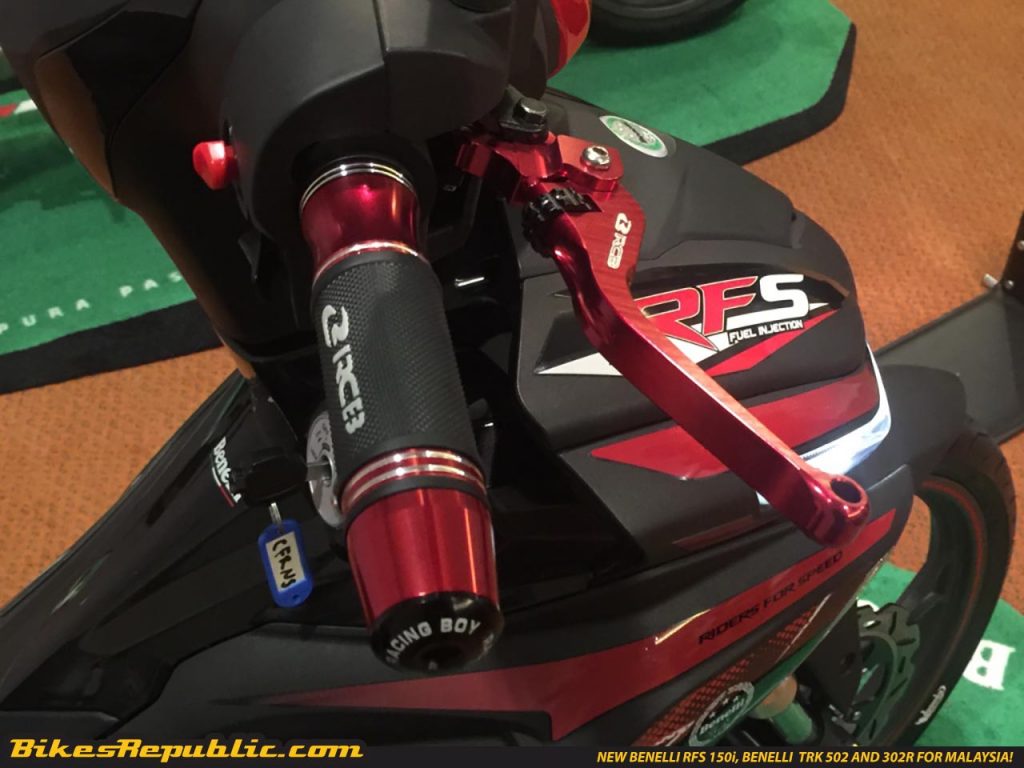 The exhaust of the bike too has been specially designed to clear the emission gases immediately and offers good cornering balance despite it being mounted on the extreme right hand side of the RFS 150i. 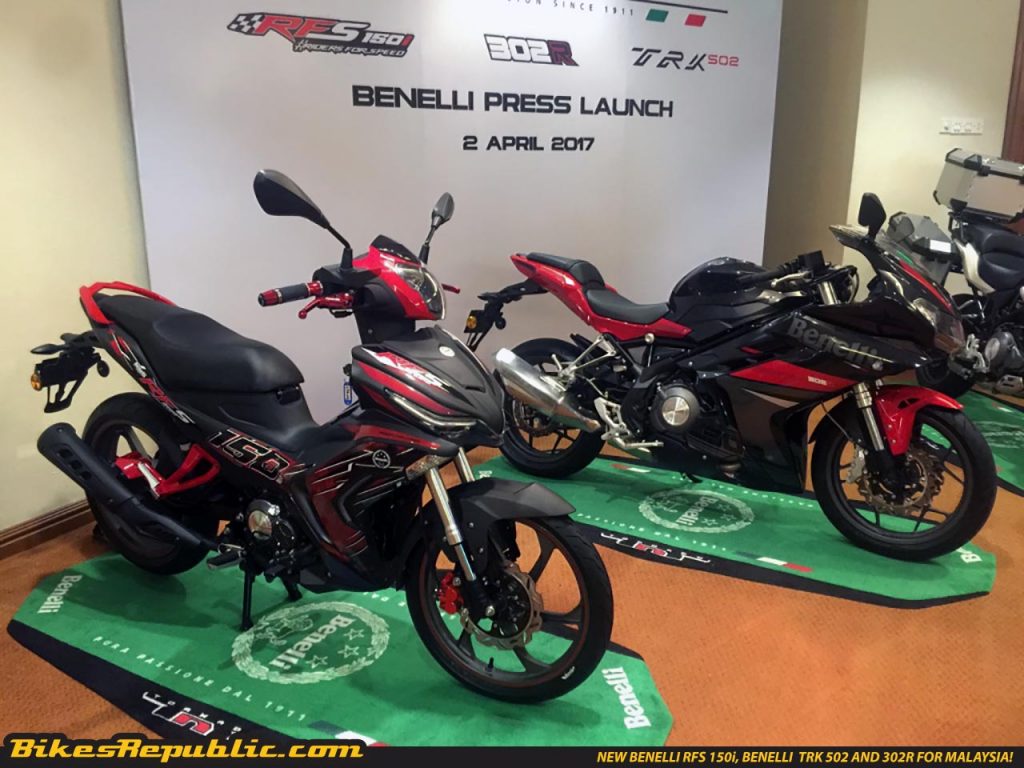 The chassis is made up of a straddle type frame with a unique upside down telescopic fork with 88mm of travel. This fork is typical of race and sports bikes, but this is the first time that a moped/kapcai is offered with this suspension set up. So that makes the RFS 150i the only motorcycle in its class with an upside down fork. 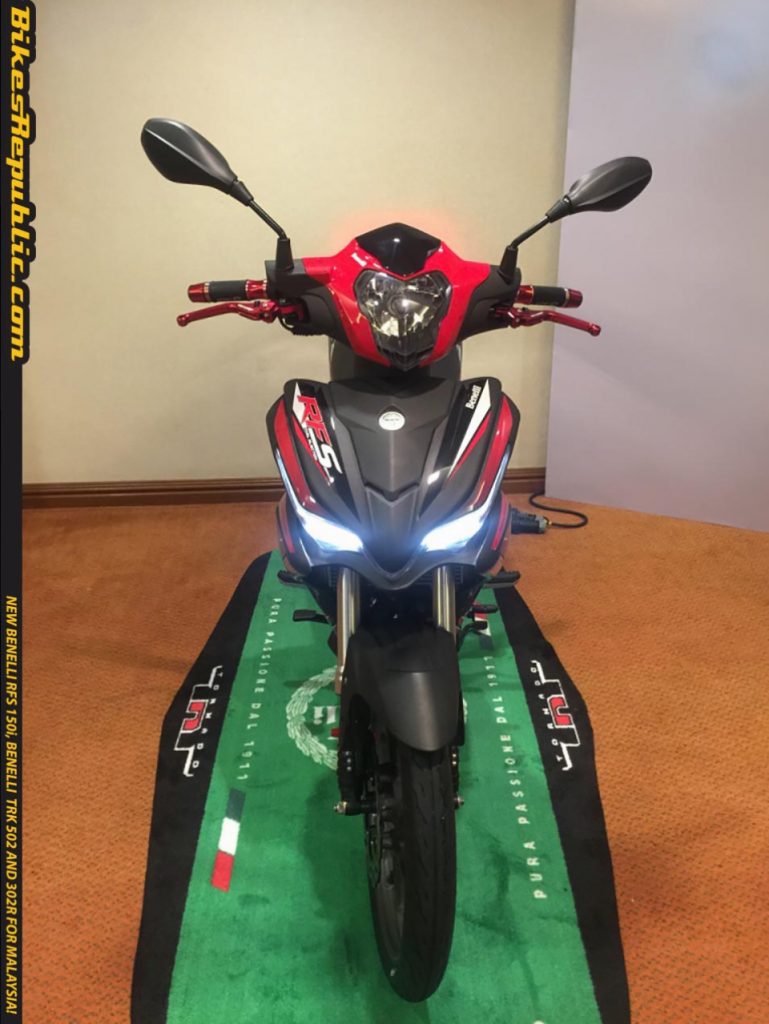 The rear suspension is made up of a telescopic single coil spring with 27mm of travel and is oil damped.

Other features include a sports seat with carbon-fibre lookalike weave with a passenger grab handle. The meter panel is part analogue and part LCD while the front headlight features integrated LED daytime running lights. 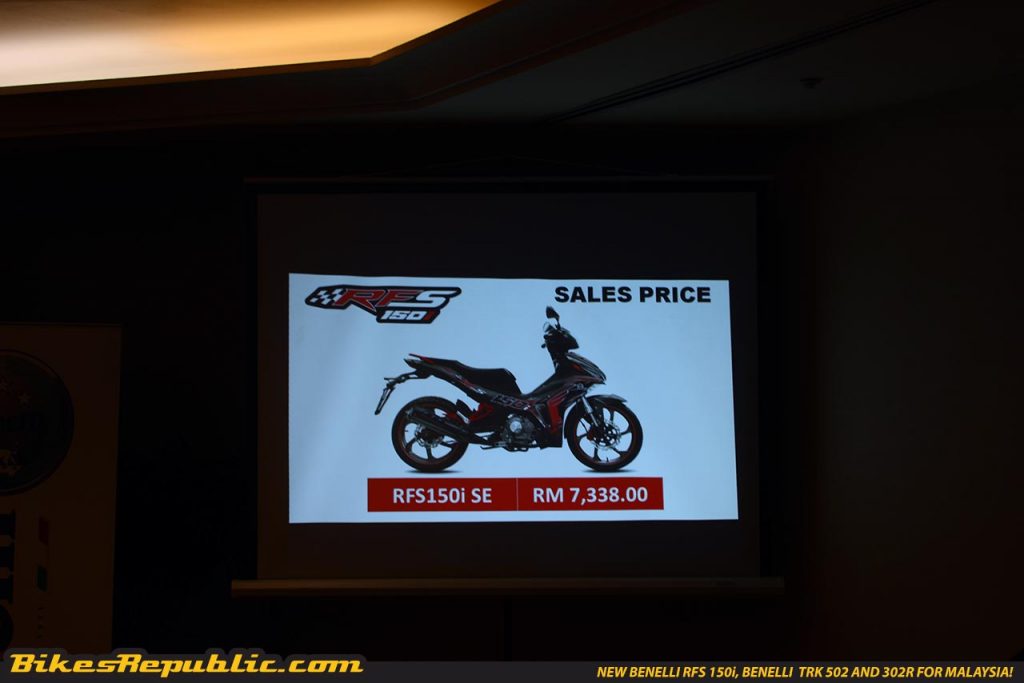 Prices start from RM6,988 for the yellow, red, blue and matte grey, and RM7,338 for the special edition model. Did we mention the RSF150i is the cheapest in its class? 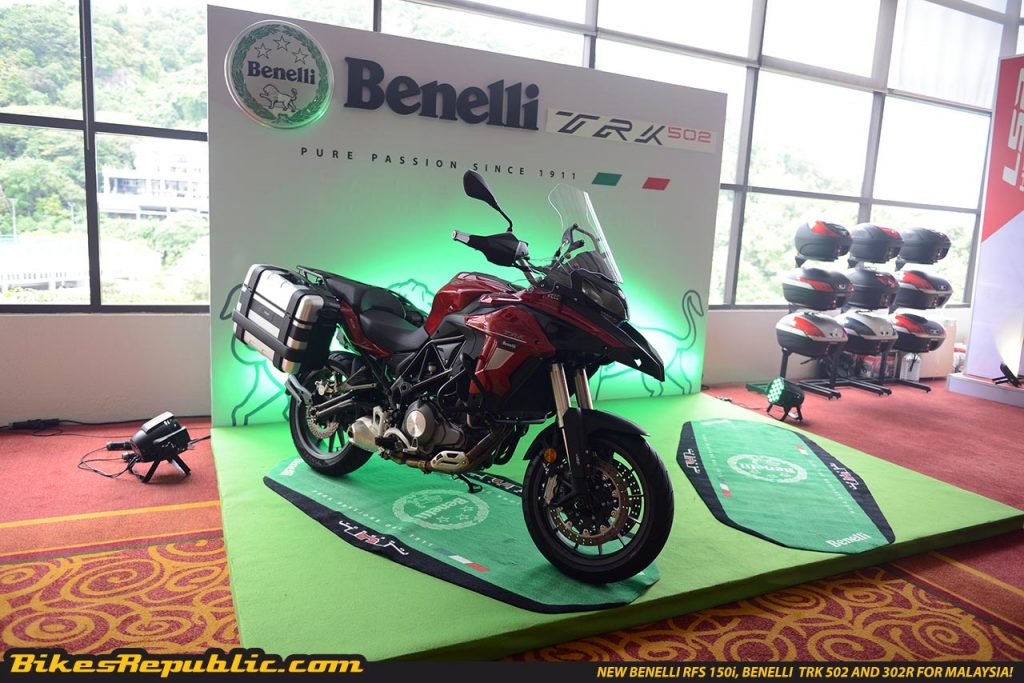 This is the touring bike the market has been waiting for. With a price of RM28,888 with no panniers, and up to RM30,588 with all side and top panniers included, the Benelli TRK 502 is the bike you want if you are looking for a touring bike that is big in size, light and easy to maintain with very little electronics. 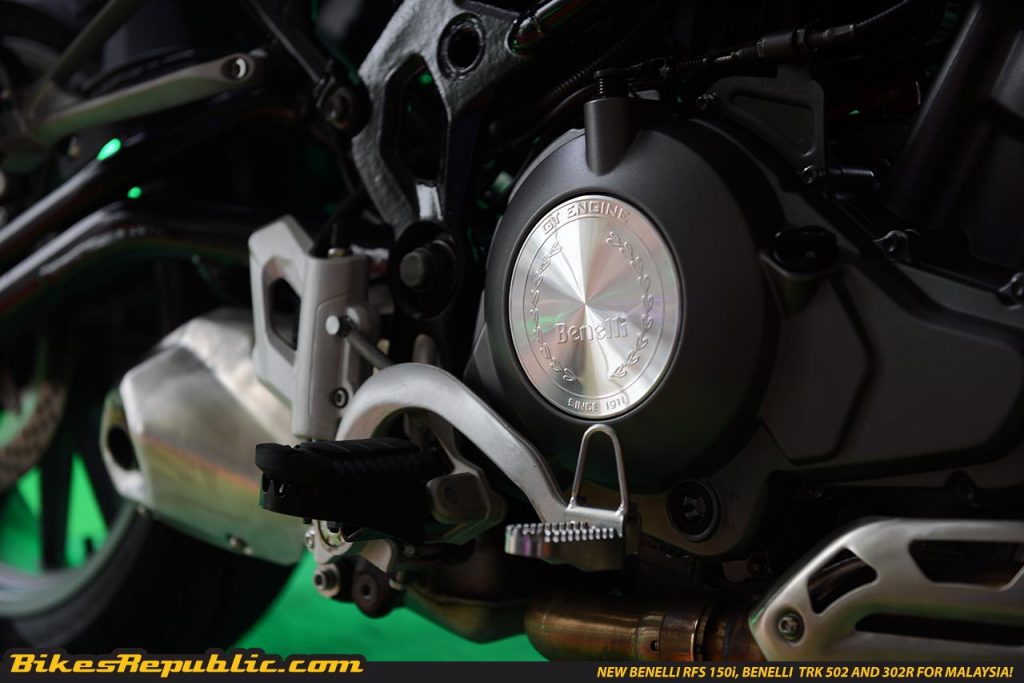 The engine is a twin-cylinder, liquid-cooled, DOHC with four valves per cylinder, 500cc unit that puts out a decent 48hp at 8,500rpm and 45Nm of torque at 5,000rpm. The engine is mated to a wet, multiple, six-speed gearbox. 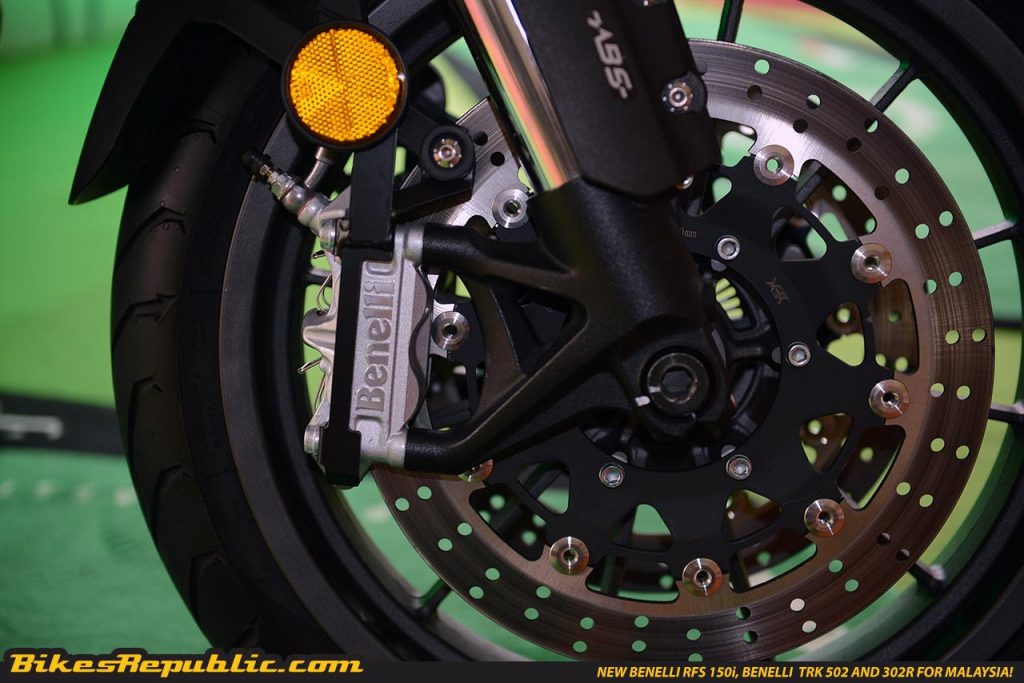 The suspension of the TRK 502 is made up of an adjustable upside down front fork with 150mm of travel, and the rear consists of a steel swing-arm with an oil damped, coil spring with 45mm of travel. 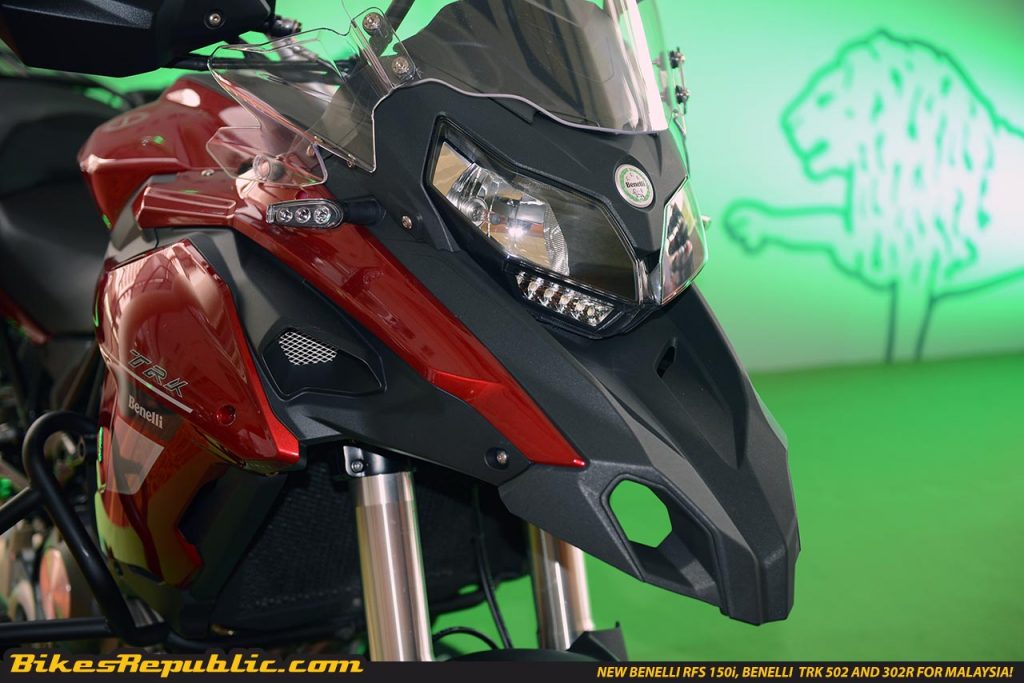 Braking power is provided by dual 320mm discs up front with twin-piston callipers, and a single 260mm disc also gripped by a twin piston calliper. 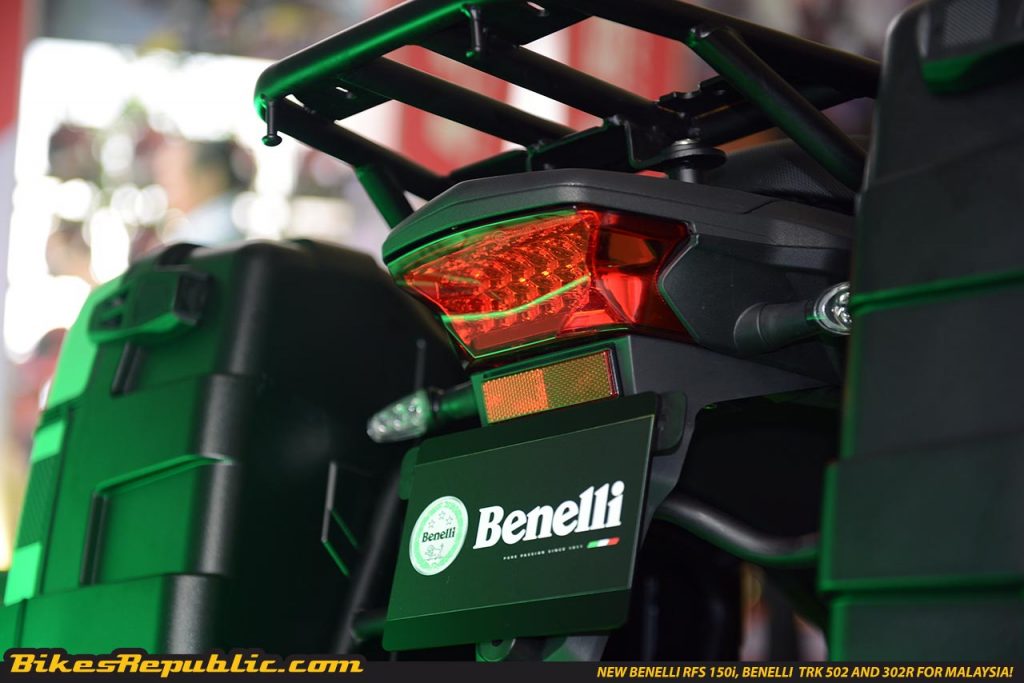 The TRK 502 comes in three colours, white, gray and red/black. Prices stated above are excluding GST. 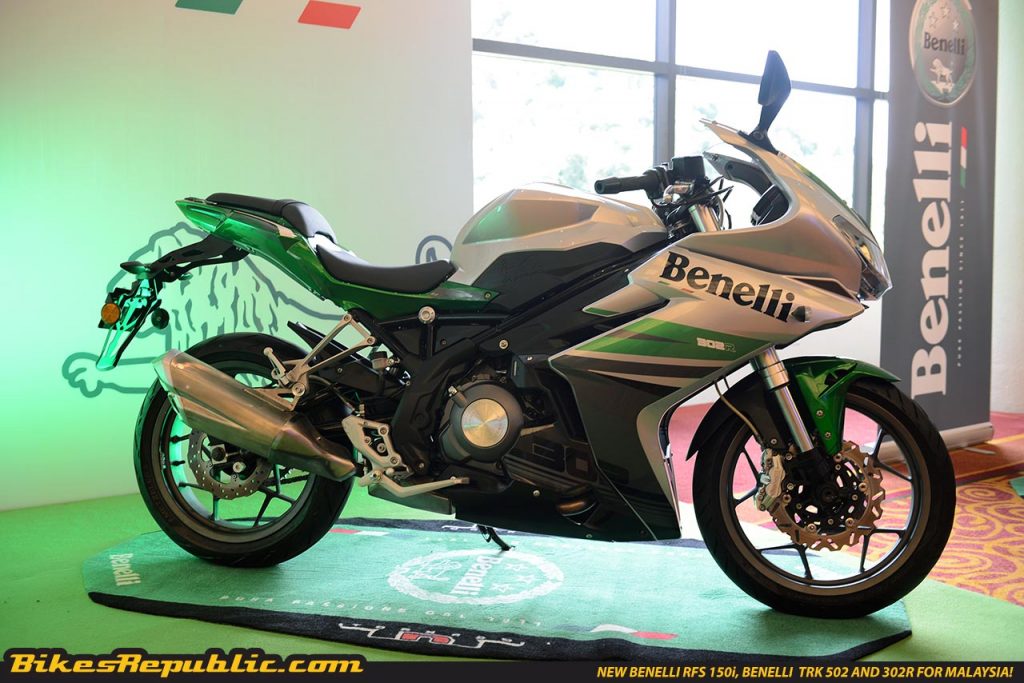 If you want a sport bike but don’t want to fork out more than RM25,000 for one, then the 302R is worth a look. It features a classic Italian rounded design with a mix of a new age edginess. 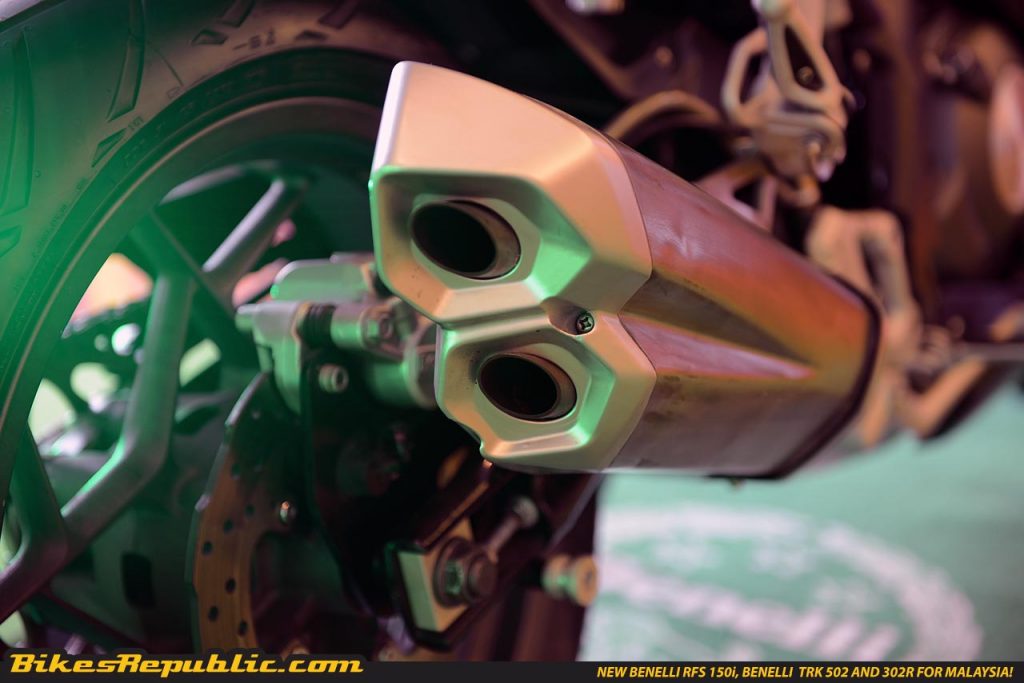 It may not seem like it from here, but the 302R is a long bike, measuring in at a lengthy 2157mm with a wheelbase of 1405mm. The dimensions and the design gives the 302R an imposing presence, but the powerplant seems friendly. 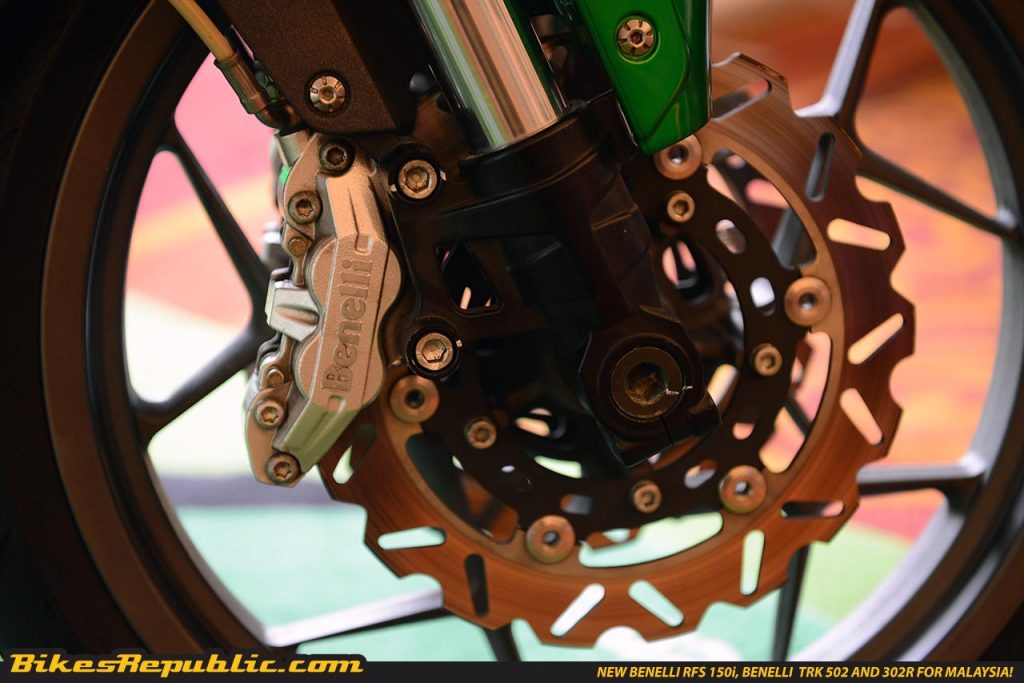 The engine is a 300cc four-stroke, liquid-cooled, vertical twin-cylinder, DOHC with four valves per cylinder, and puts out 37hp at a screaming 10,000rpm and 27.4Nm of torque at 9,000rpm. It too is mated to a six-speed gearbox with a wet multi-plate clutch and a chain final drive. In fact, all three new Benelli bikes feature a chain final drive. 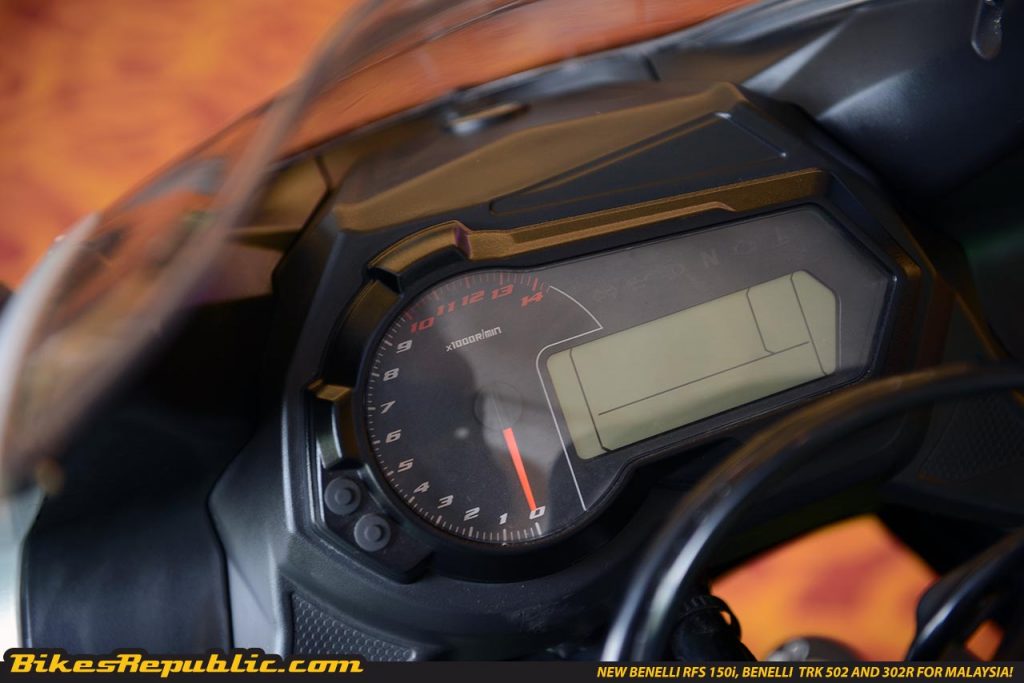 It features an arch bar truck frame with telescopic front forks with 120mm travel, and telescopic oil-damped coil spring suspension at the rear with 45mm of travel. 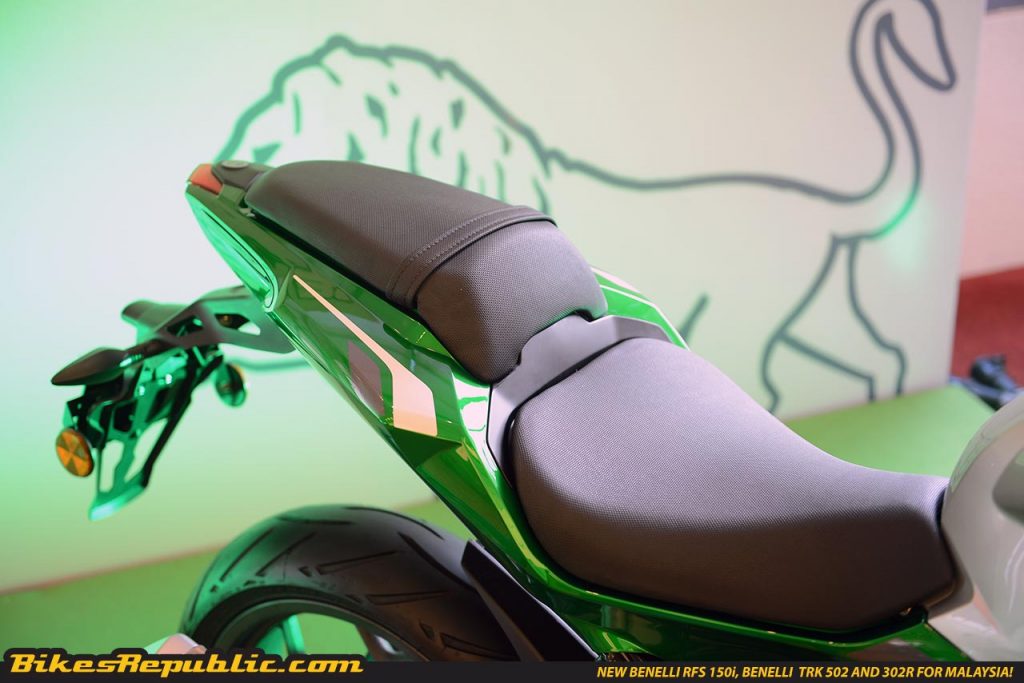 At 190kg dry, the 302R is not a light bike, but with good looks and a great price on its side, the new sports Benelli will be swaying opinions in its favour when it hits the streets real soon. 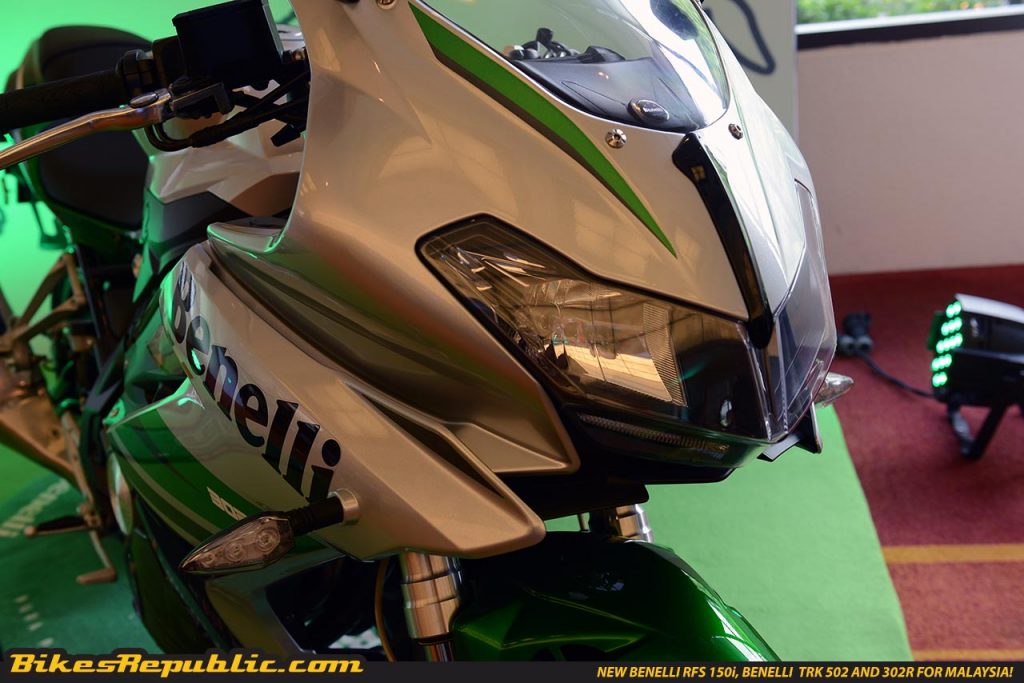