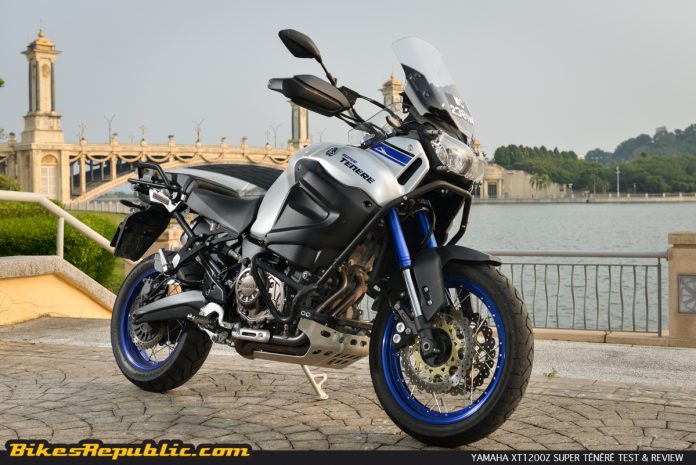 At the height of the Paris-Dakar Rally from the mid-eighties to the mid-nineties, large capacity, multi-cylinder motorcycles ruled the dunes of the Sahara. What BMW started off with the R80G/S had become an arms race among the manufacturers, as their machines took to the sand dunes to duke it out against one another in order to claim the title as the champion of the world’s most grueling rally. It was the place to prove the technology and reliability of their motorcycles. 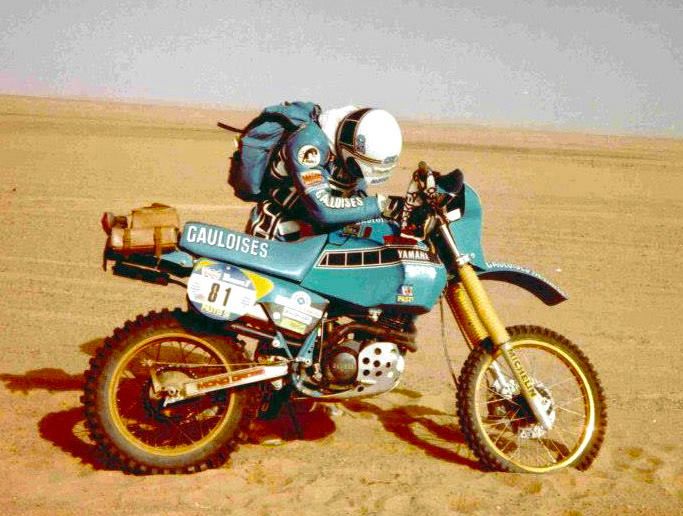 There were many historic motorcycles resulting from their success in the rally, among them was the Yamaha Ténéré.

You see, the name literally means “desert” in the Tuareg language. The Ténéré is a 400,000 km sq. region of vast sand plains, stretching from Niger into Chad. Temperatures here typically hit 50o in the summer, with a maximum annual rainfall of just 15mm (that’s the just the tip of my pinky). In other words, it’s among the harshest locations on the planet. Although the Ténéré region formed just one part of the rally, it was the toughest stage for all the competitors; there were those who either perished or got lost altogether and were never found.

During its heydays, the rally consisted of motorcycles that were little more than modified enduros. Indeed, Yamaha scored their first two Paris-Dakar wins in 1979 and 1980 on the XT600Z Ténéré ridden by Frenchmen Cyril Neveu. It was as single-cylinder enduro overbored from the XT550. 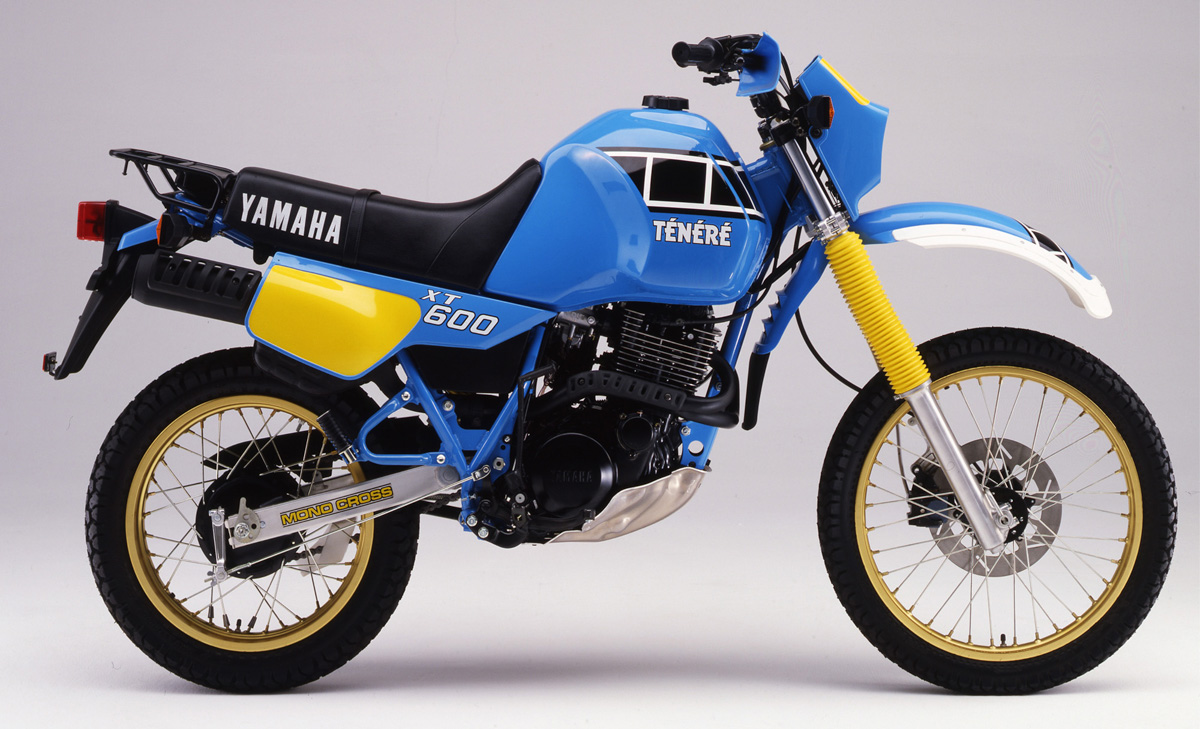 As the years rolled by, the Ténéré got physically bigger although the engine size remained the same, until 1989 when Yamaha rolled out the XTZ750 Super Ténéré (notice the model designation).

Featuring a 5 valve-per-cylinder, liquid-cooled, parallel-Twin, the XTZ750’s YZE750 race version went on to win the Dakar twice, followed by another four titles by the 850cc version. 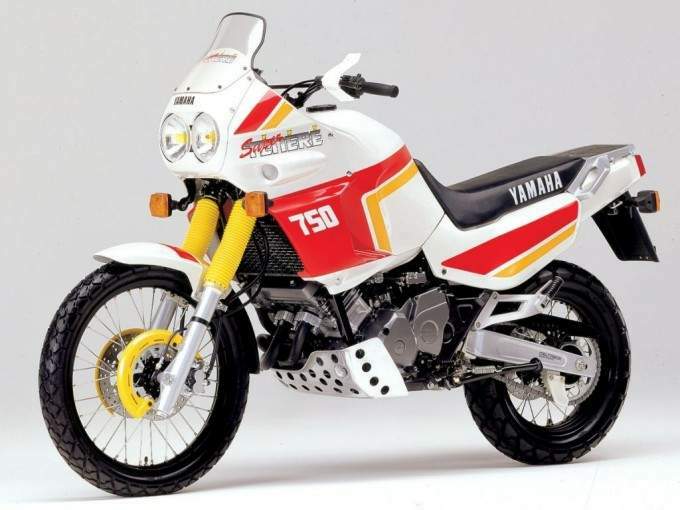 The success at the rally branded the Yamaha Super Ténéré as one of the most iconic dual-purpose motorcycles of all time.

The present form of the bike was released in 2010, called the XT1200Z Super Ténéré or “Super Ten” as it’s fondly called. Yamaha decided to go big bore in order to compete with the successful BMW R 1200 GS, while retaining the XTZ750’s template of a comfortable, long-distance adventure-tourer. 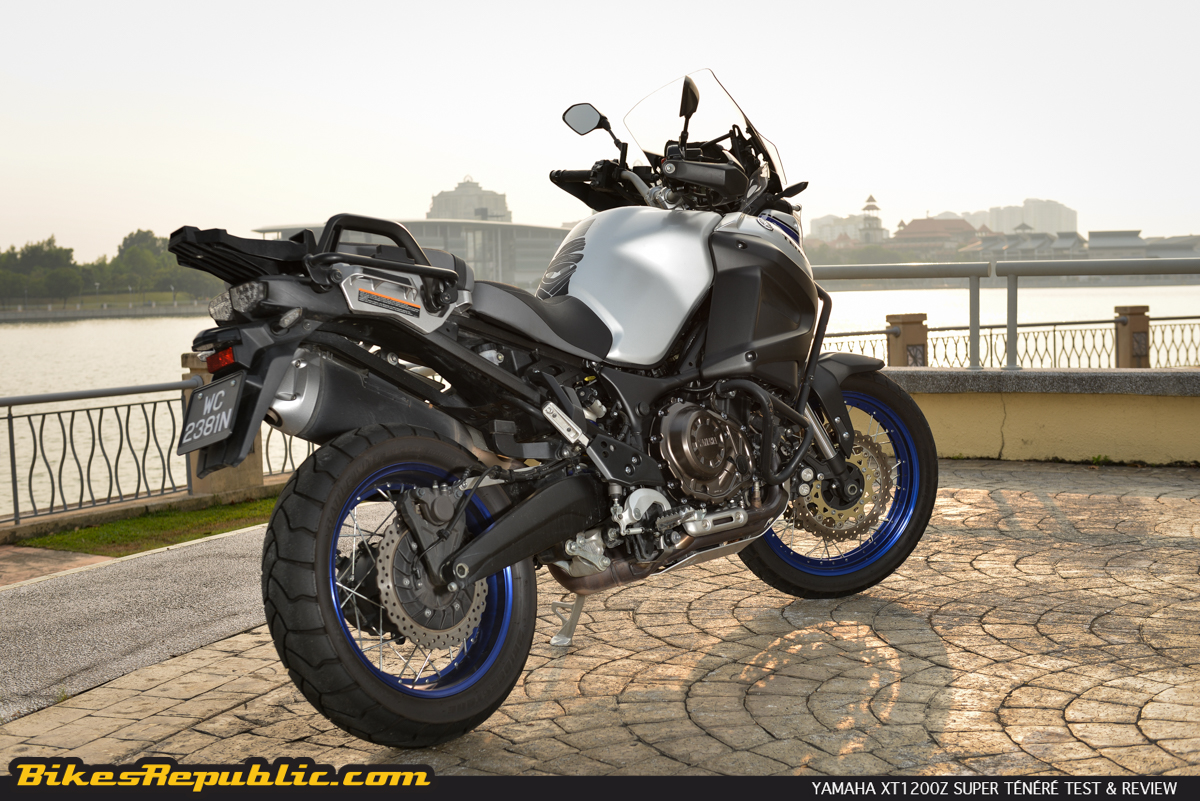 It was a technological tour-de-force during its launch, featuring a 4 valve-per-cylinder, liquid-cooled, parallel-Twin. But the differences here are the 270o crankshaft which mimics the firing order of a 90o V-Twin (first seen on the TDM850, Yamaha calls it “crossplane,” now ubiquitous with the Yamaha brand), YCC-T (Yamaha Computer Controlled Throttle) which was Yamaha’s ride-by-wire throttle, 3-way traction control and linked ABS. 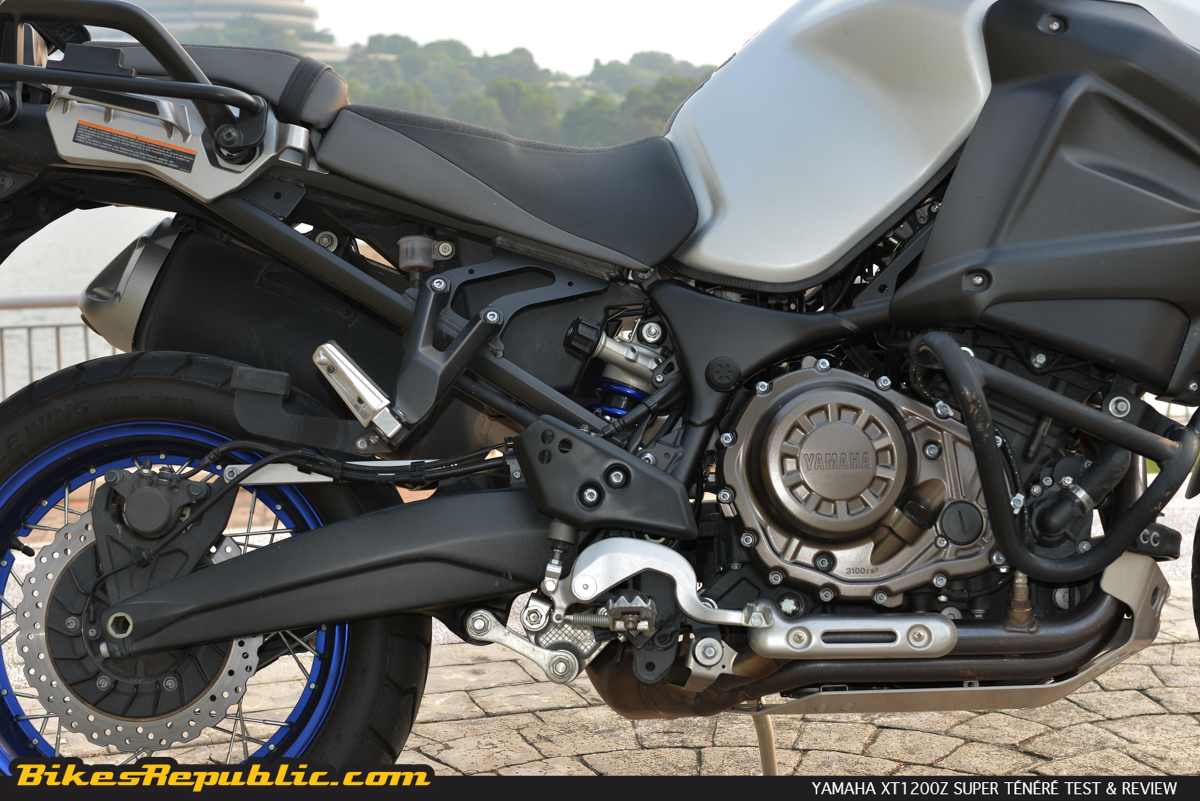 Customers loved the Super Ténéré for its comfort, long range and ability to haul luggage. The bike was given only minor updates before electronic suspension made its debut from the 2016 model year.

Tested here is the 2015 Super Ténéré, which Hong Leong Yamaha Motors Sdn. Bhd. had brought into Malaysia to grace their gallery in the HQ at Sungai Buloh. 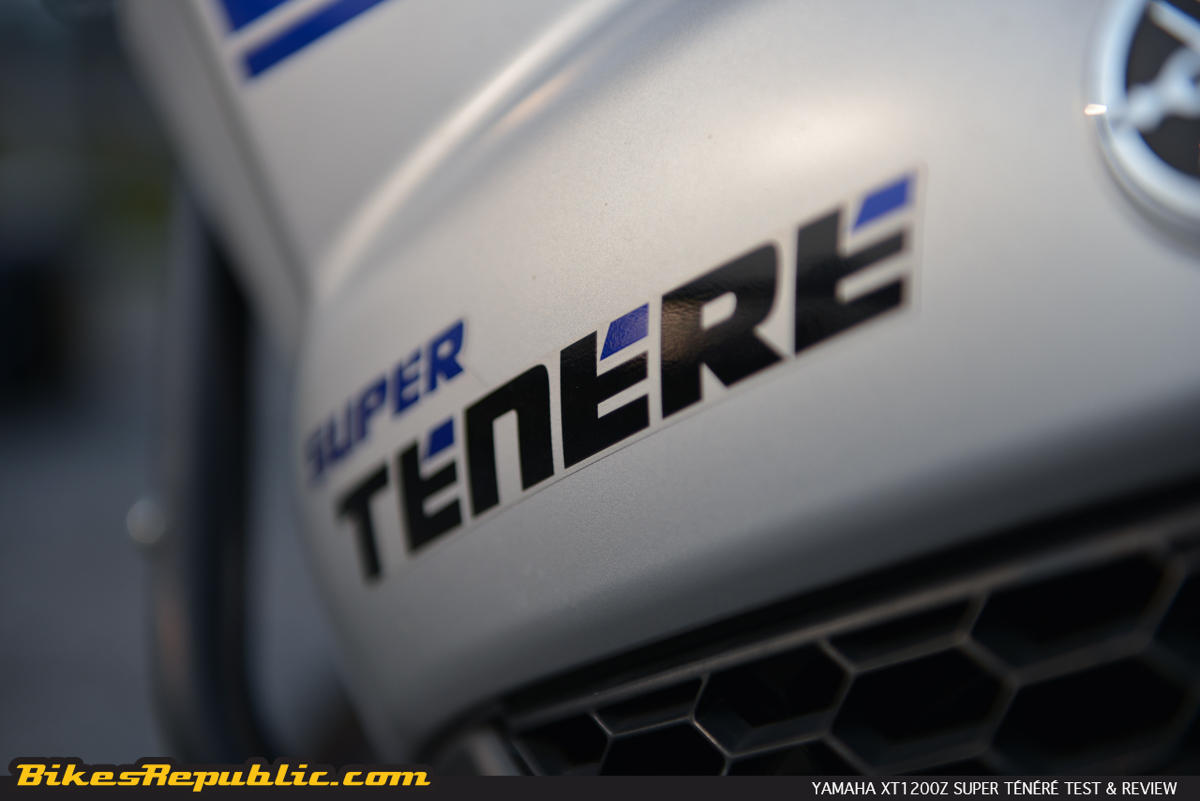 It was incidentally the same model we rode in the 2015 GIVI Wilderness Adventure in South Africa! I’ve always been curious about the Super Ténéré’s performance on Malaysian roads and this was the great opportunity to finally ride it in earnest. 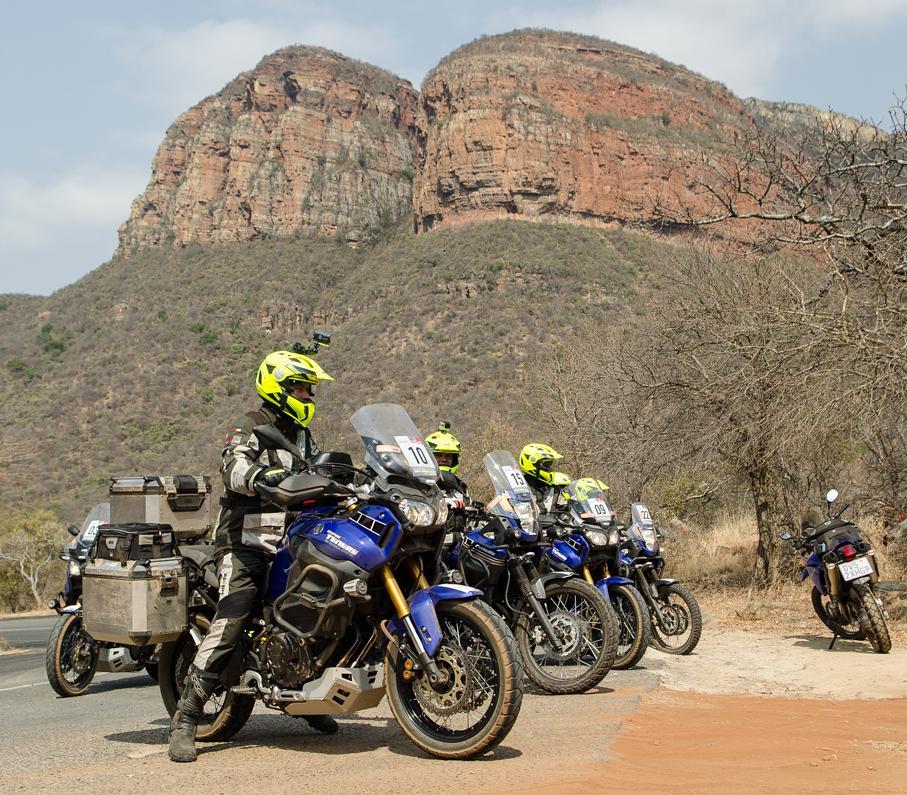 First impression: No one ever said the bike was small, but the size of that tank and front portion of the bike has always impressed me. It had the stance of that bronze bull statue outside the KLSE. Yamaha claims the Super Ten’s wet weight as 261 kg. 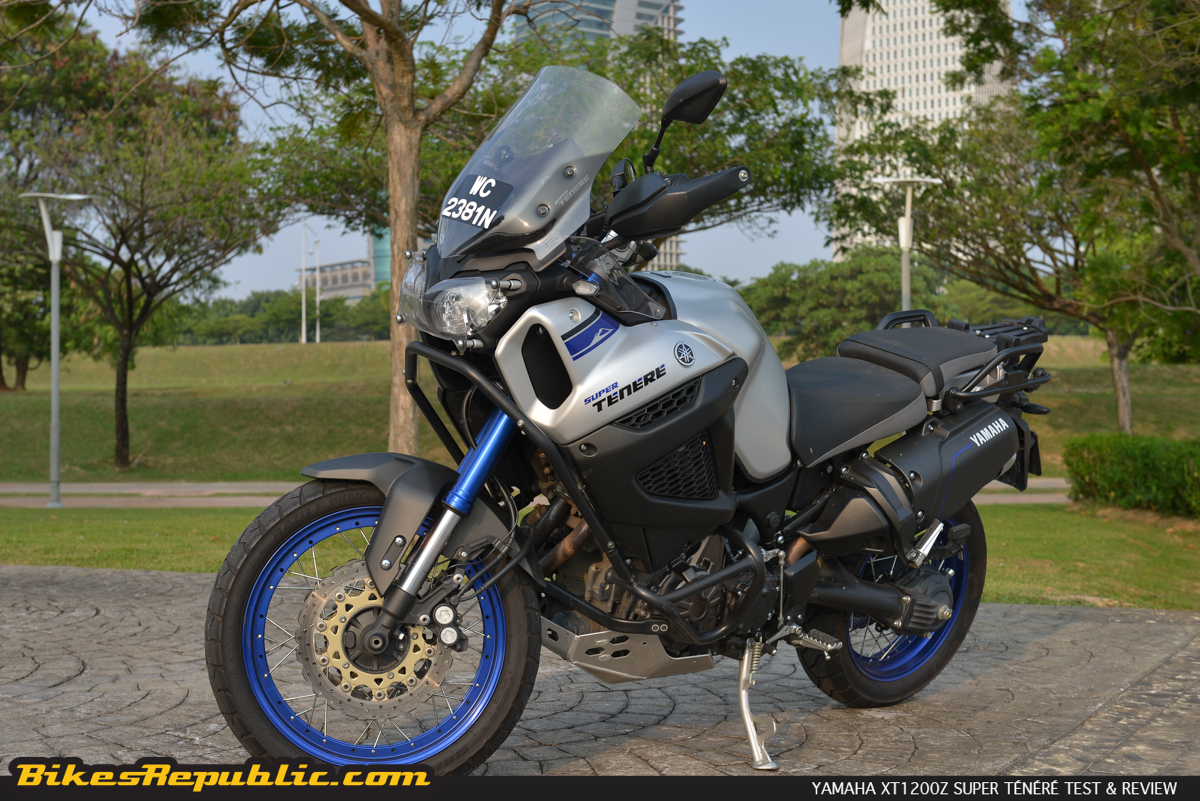 Climbing on was surprisingly easy, without even having to mount it like a horse. My buddy Jeya thought me the technique on lifting tall and large bikes off the sidestand. Turn the handlebar slightly to the right, push on it while shifting your upper bodyweight over to the right. Done! That’s surprisingly easy.

Set to the lower position, I was able to tip-toe on both feet, despite the bike’s wide mid-section where the seat joined the tank. Getting going was easy too, without the sense of the bike trying to topple over.

Looking forward into the “TV screen” as the LCD instrument cluster is affectionately called, it’s chockful of information. The same screen adorns the MT-09 Tracer and provides the same data as well. As such, it was easy to familiarize oneself with the controls on the left handlebar, although I wished the switch to toggle the information is where the cruise control switch is, as I needed to push my thumb up there to flick through the menu. 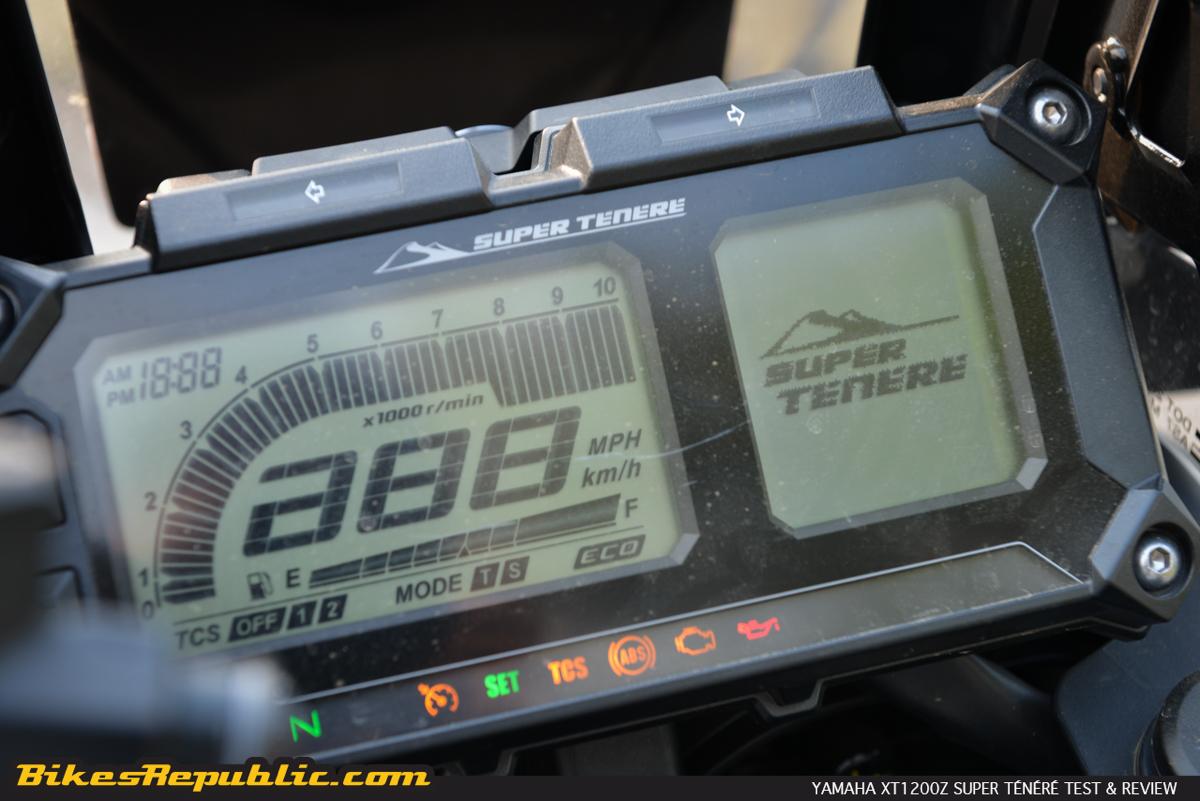 Another thing I wish Yamaha would revise is the switch for traction control. The ride mode switch is on the right handlebar, but you would need to stretch all the way forward to reach the TCS button. Another gripe I have is that you can’t change riding modes and TCS levels while on the move. 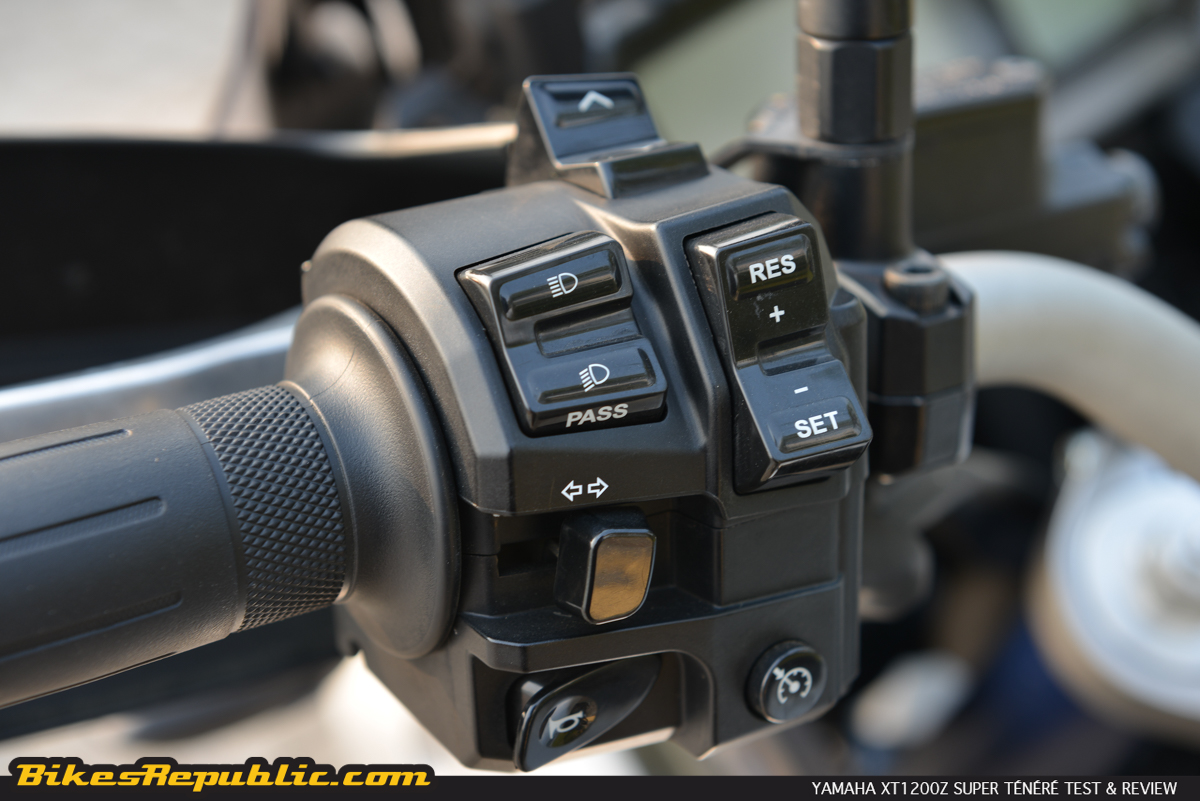 Anyhow, the big amounts of torque made the bike relative easy to ride as it pulled smoothly through the gears without ever seeming to run out of steam. Up on the highway, the Super Ténéré is predictably fast without feeling labored. The suspension was commendably comfortable at sane speeds but the front went light at (much) higher speeds. This was especially noticeable when trying to steer the bike into corners at speeds above the speed limit. That’s attributable to the rear-weight bias of the bike, as the handlebar sweeps backwards putting the rider in a very upright riding position. As such, the weight remains between the arms and it never goes away for a small-sized rider like me. 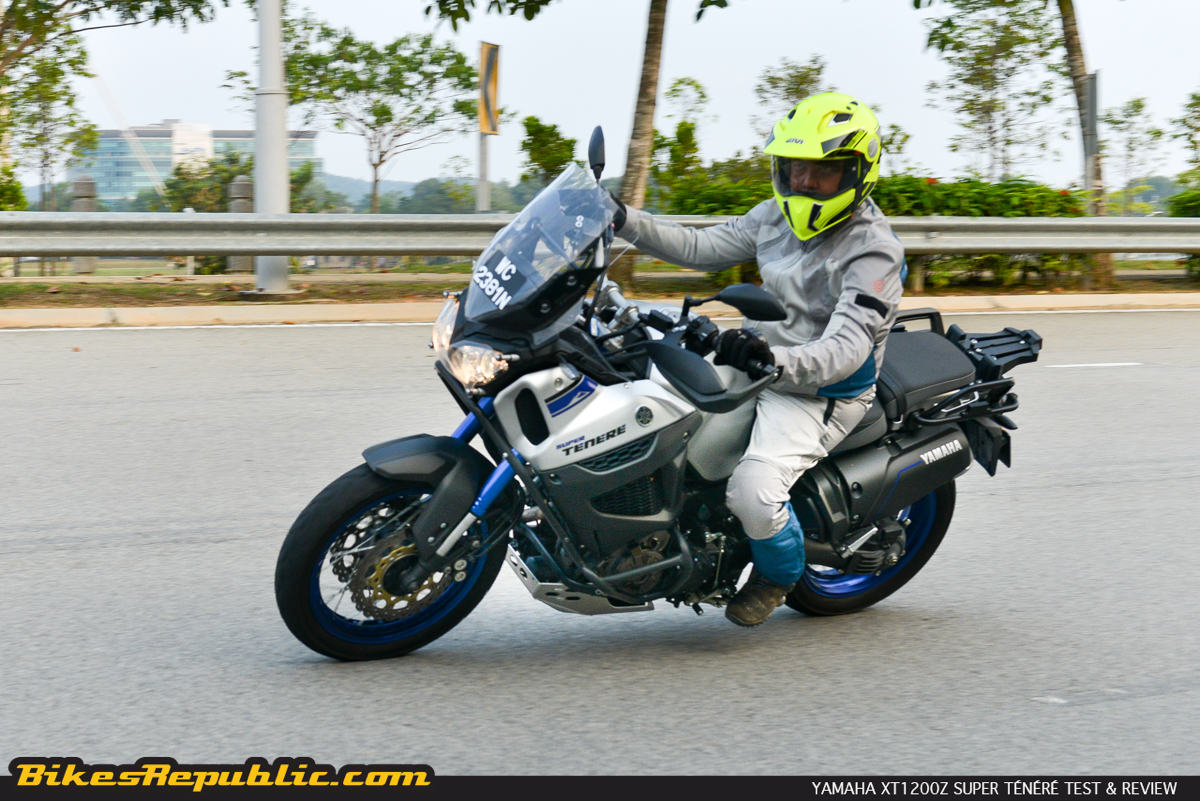 But riding in that position is positive over long distances. The screen may seem small, but it deflected wind off your face and torso. The seat was wide and deeply padded. 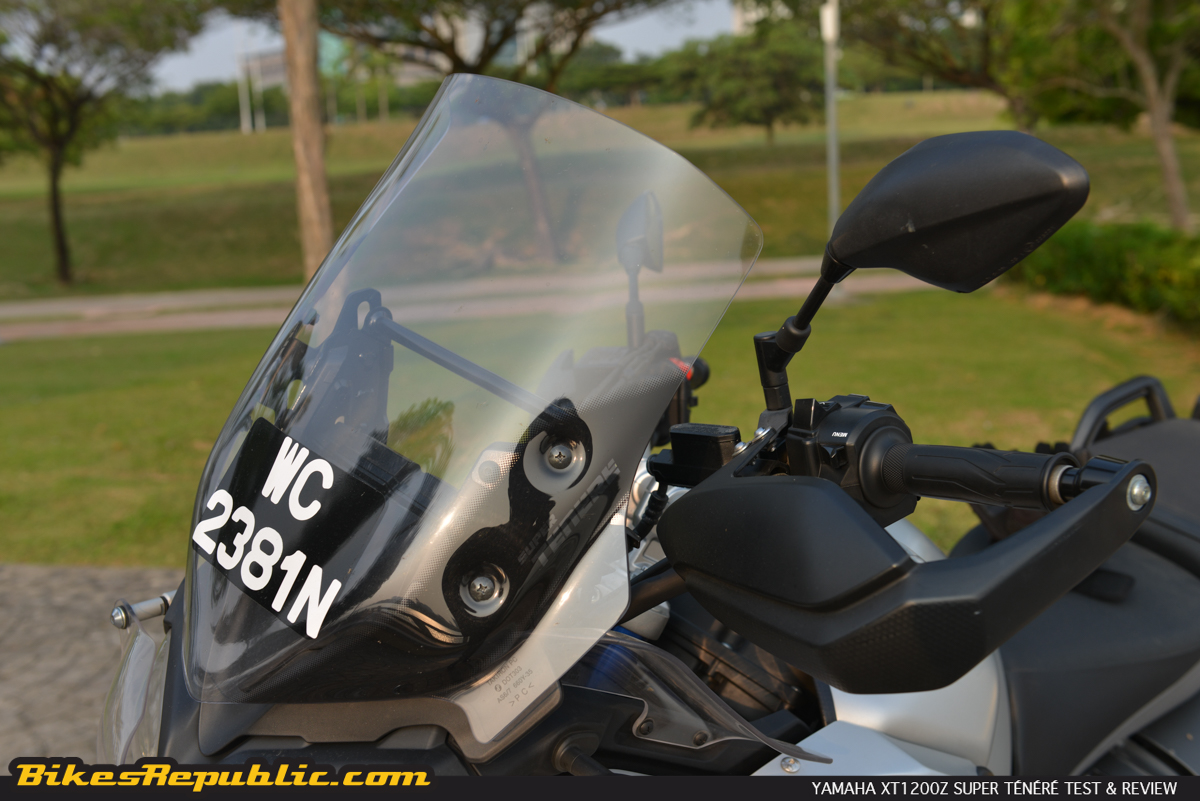 However, I appreciated Yamaha eliminating “shaft jacking.” The rear end of a high torque shaft-driven motorcycle has the tendency to rise when accelerating but it wasn’t perceptible on the Super Ten. However, you would need to remember to enter corners as smoothly as possible, and usually in one gear higher to avoid the abrupt back torque. Done right, at the correct speed, the bike sweeps through long corners like a battleship cutting through the waves. 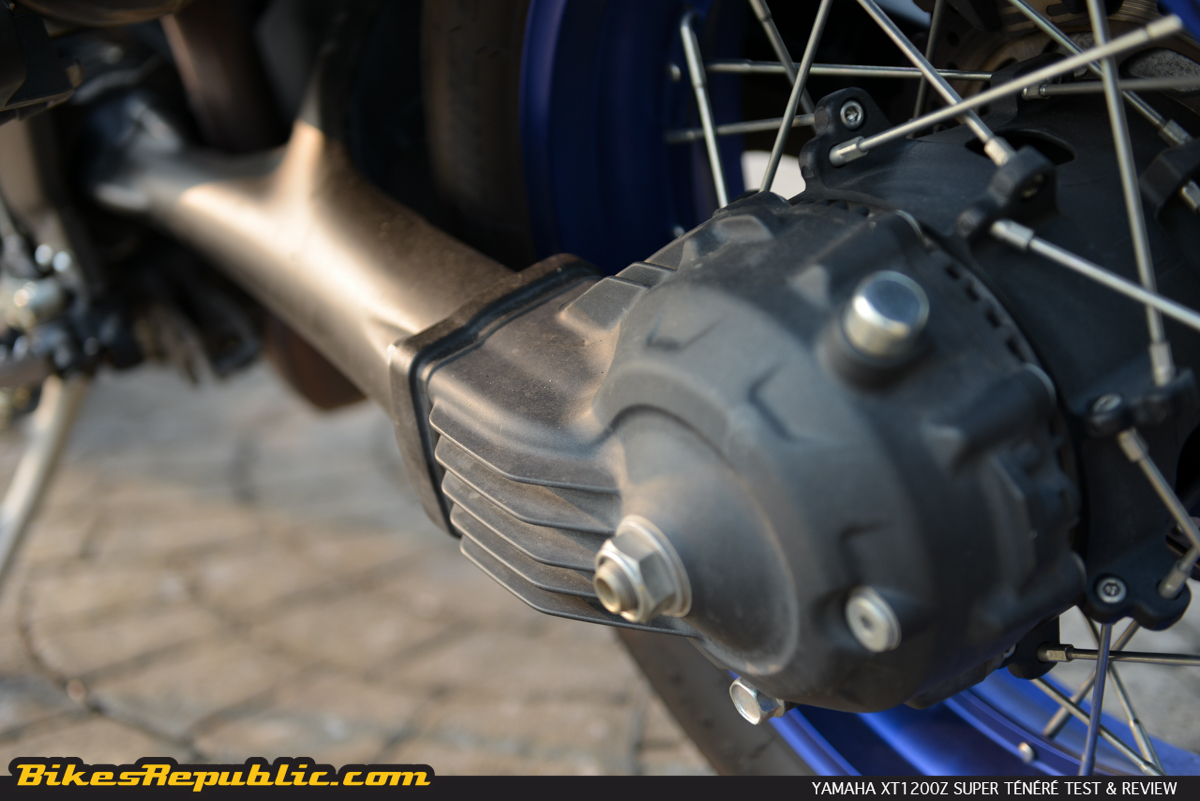 We had the opportunity to ride the Super Ten on a dirt road when we covered the Rimba Raid. Ridden at crawling speeds and rider standing up on the footpegs, the bike was planted, despite being shod with Bridgestone Battle Wing road-biased adventure tyres. 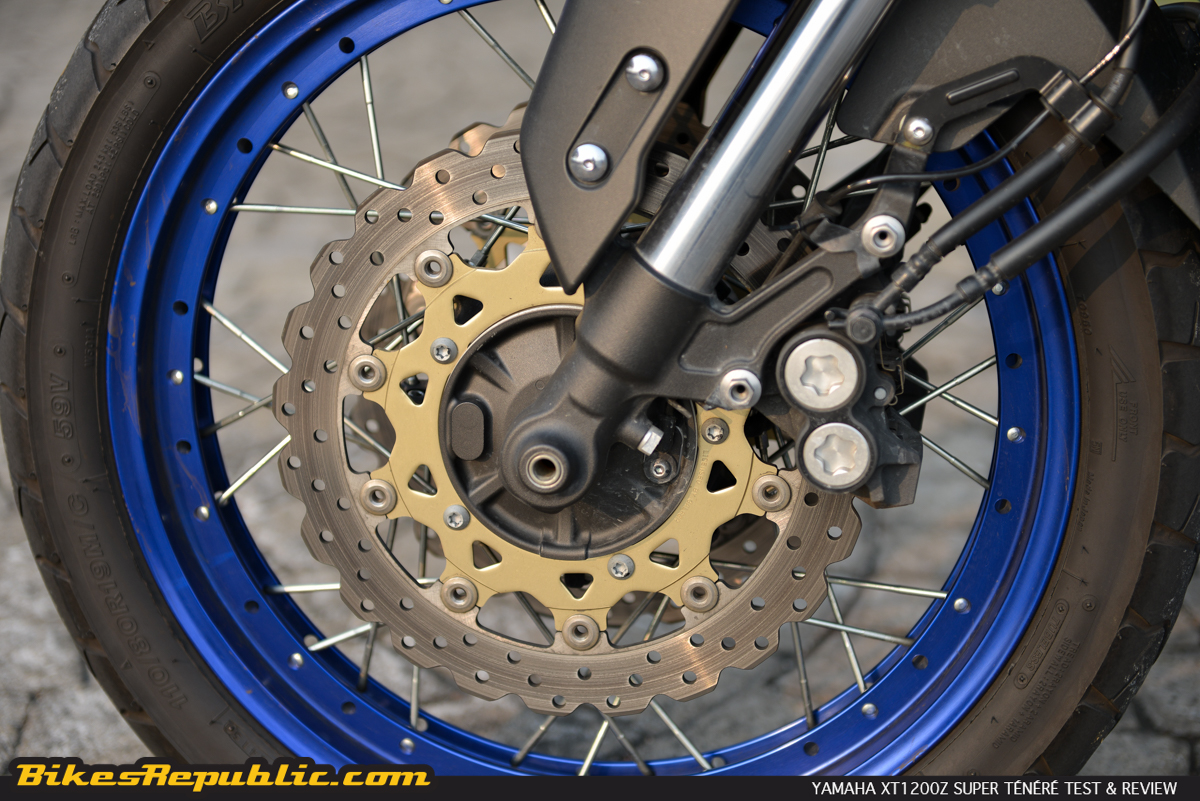 The engine’s torque meant that you could leave it second gear and you only need to slip the clutch without opening the throttle. Makes your work much easier when riding down a light offroad trail. 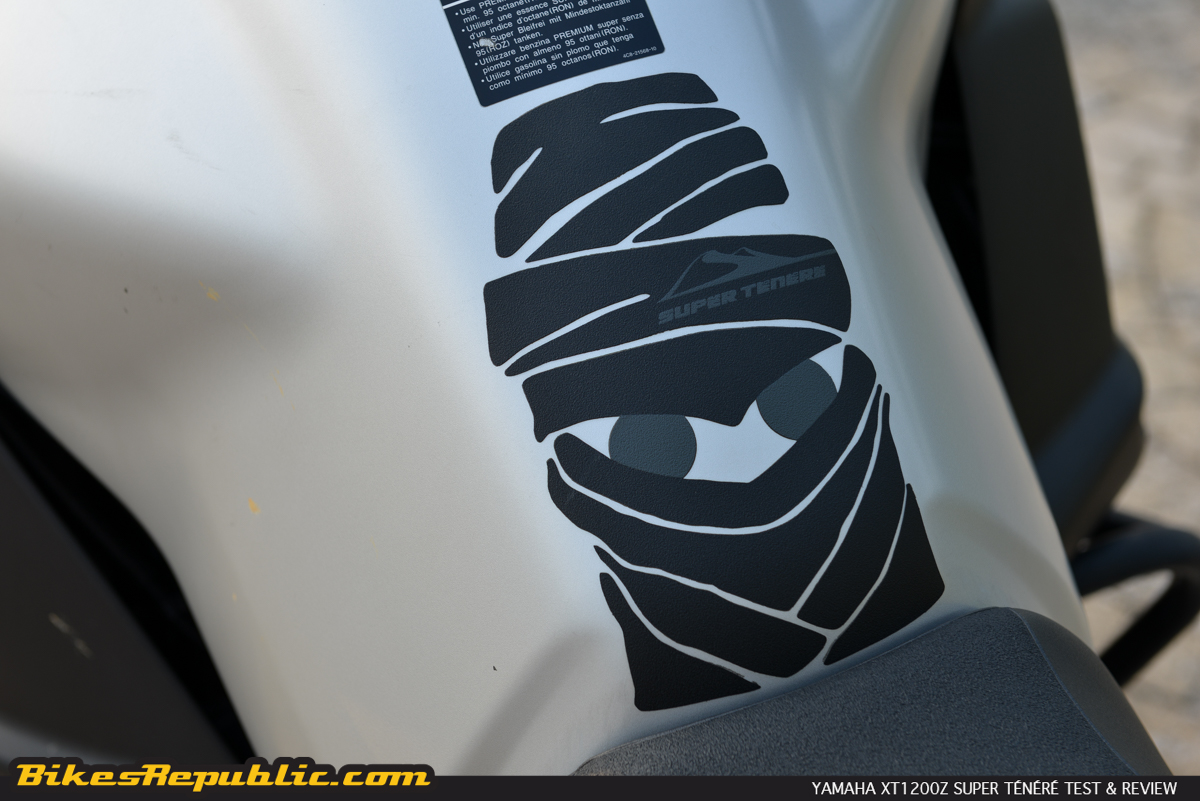 In conclusion, we do like this XT1200Z Super Ténéré. Although there’s nothing really “unfortunate” about it, and this being a 2015 model, it felt a little dated compared to the other big bore adventure bikes in the market these days. In its own right, however, it’s still a great bike to ride. The niggles we mentioned were just that: “niggles,” not complaints. It would be interesting if we could sample the latest XT1200Z Super Ténéré ES, “ES” being for “Electronic Suspension.” 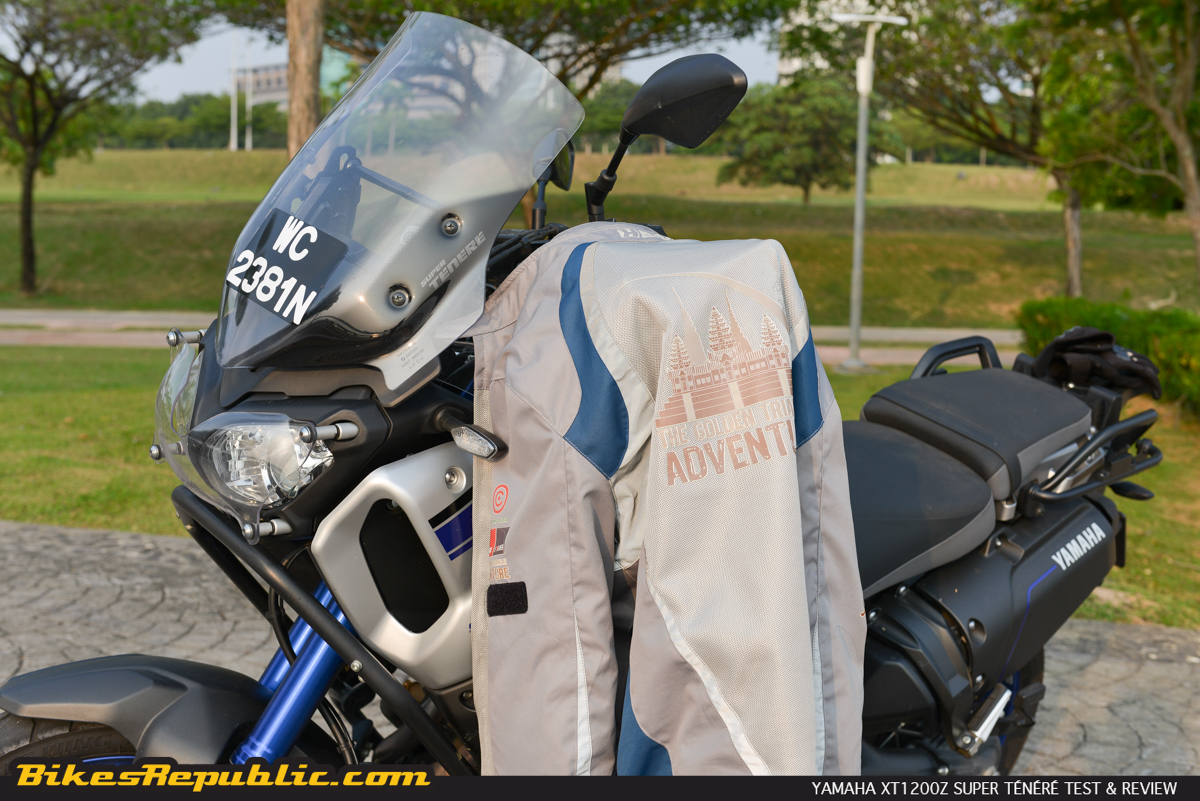