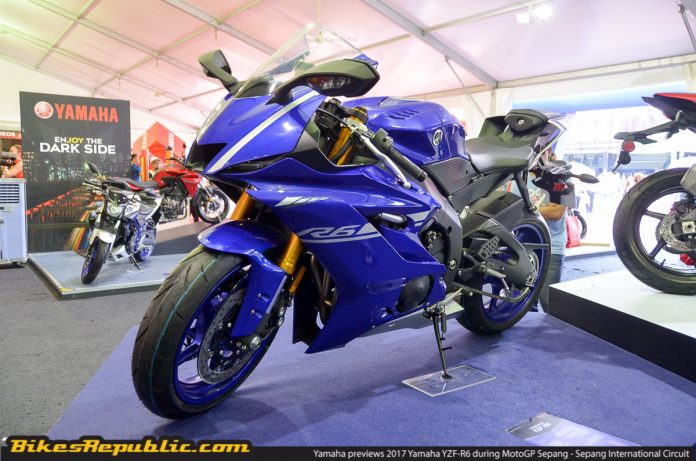 Located within their giant pavilion in the Mall Area of Sepang International Circuit, the new R6 was placed right next to the Yamaha YZF-R1S. 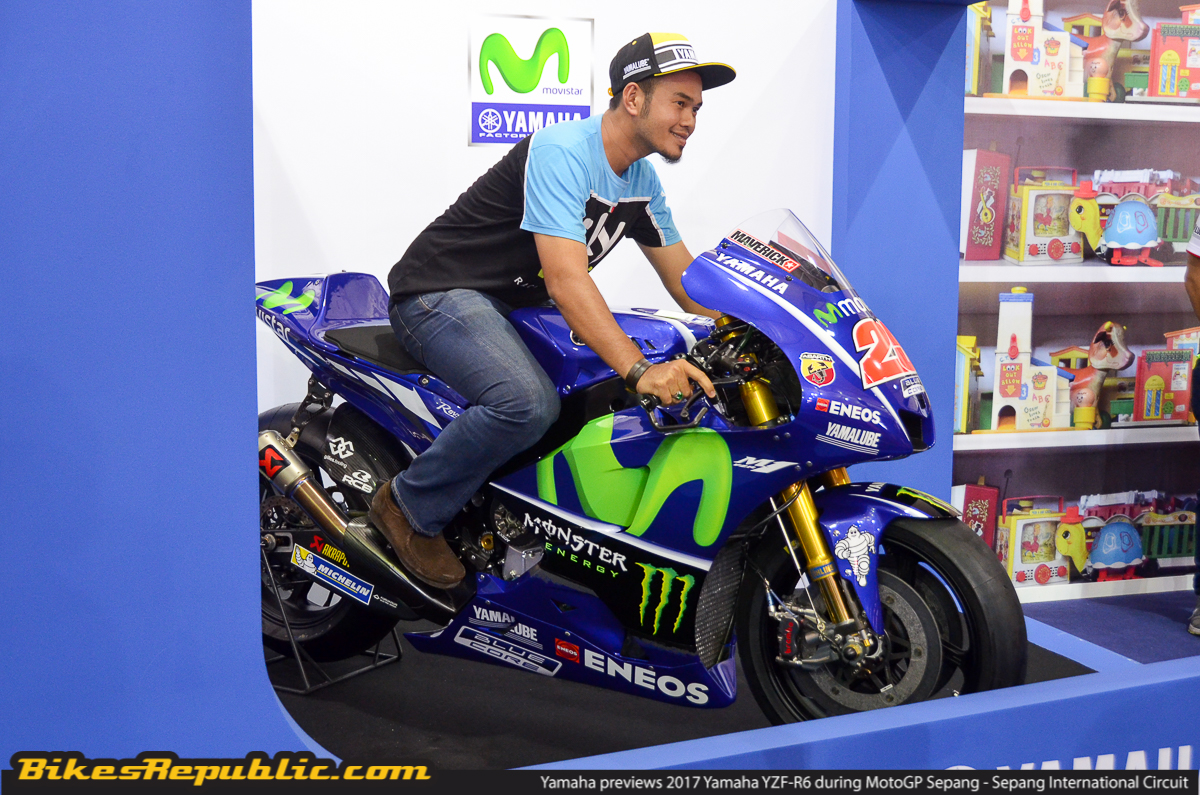 During the recent Shell Malaysia MotoGP round held at the Sepang International Circuit, there were many activities going on from the moment you park your vehicles until you get back to them way after the races have ended. As you enter the Welcome Area, you’re welcomed with many booths, activities and so much more as you proceed to the Mall Area. 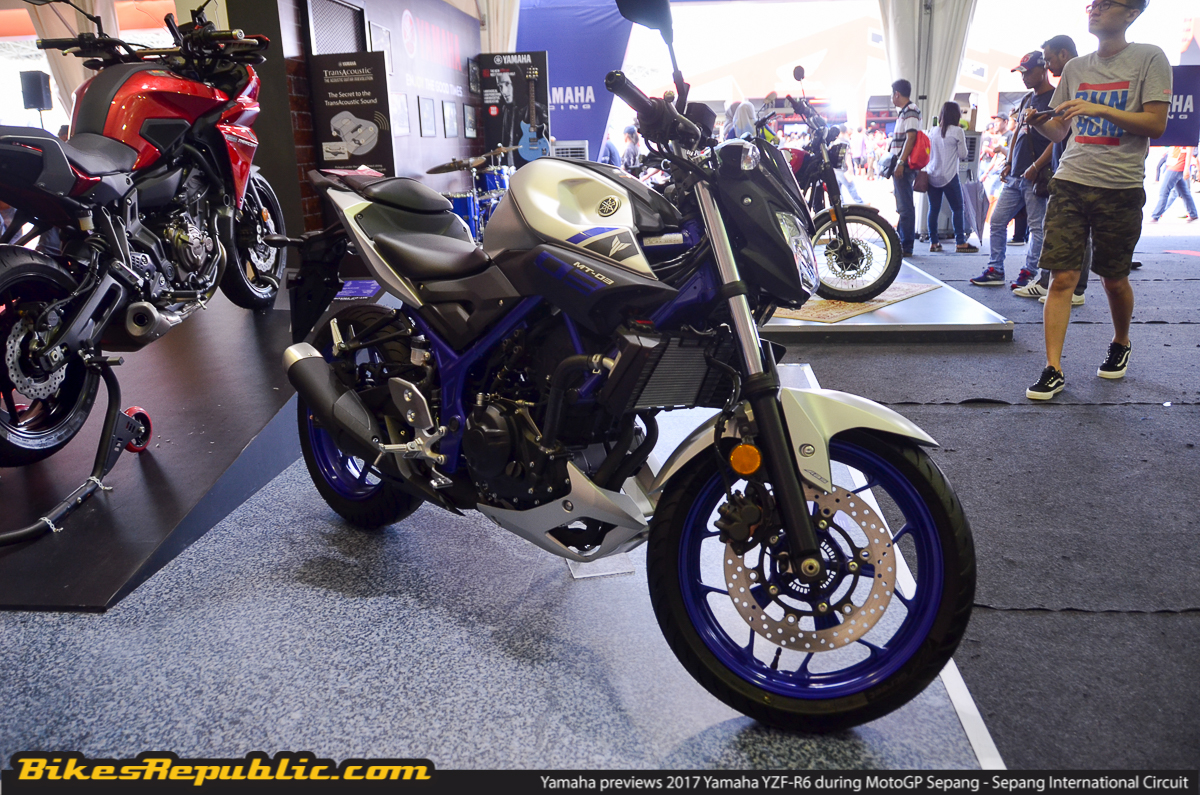 One of the biggest setups during the weekend was none other than Hong Leong Yamaha Motor Sdn Bhd (HLYM). With quite a gigantic pavilion that included a Maverick Vinales’ Movistar Yamaha M1 replica bike for attendees to take photos with, we noticed quite a range of new bikes that are not yet available here in the country. One of those bikes is the 2017 Yamaha YZF-R6.

The latest middleweight supersports machine by Yamaha was introduced late last year and has taken the world by storm thanks to its superb performance and compact all-rounder package. Judging by how the bike looks in person, the 2017 YZF-R6 looks more like a toy than an actual high-performance machine BUT don’t let the looks fool you. This baby has some serious firepower. 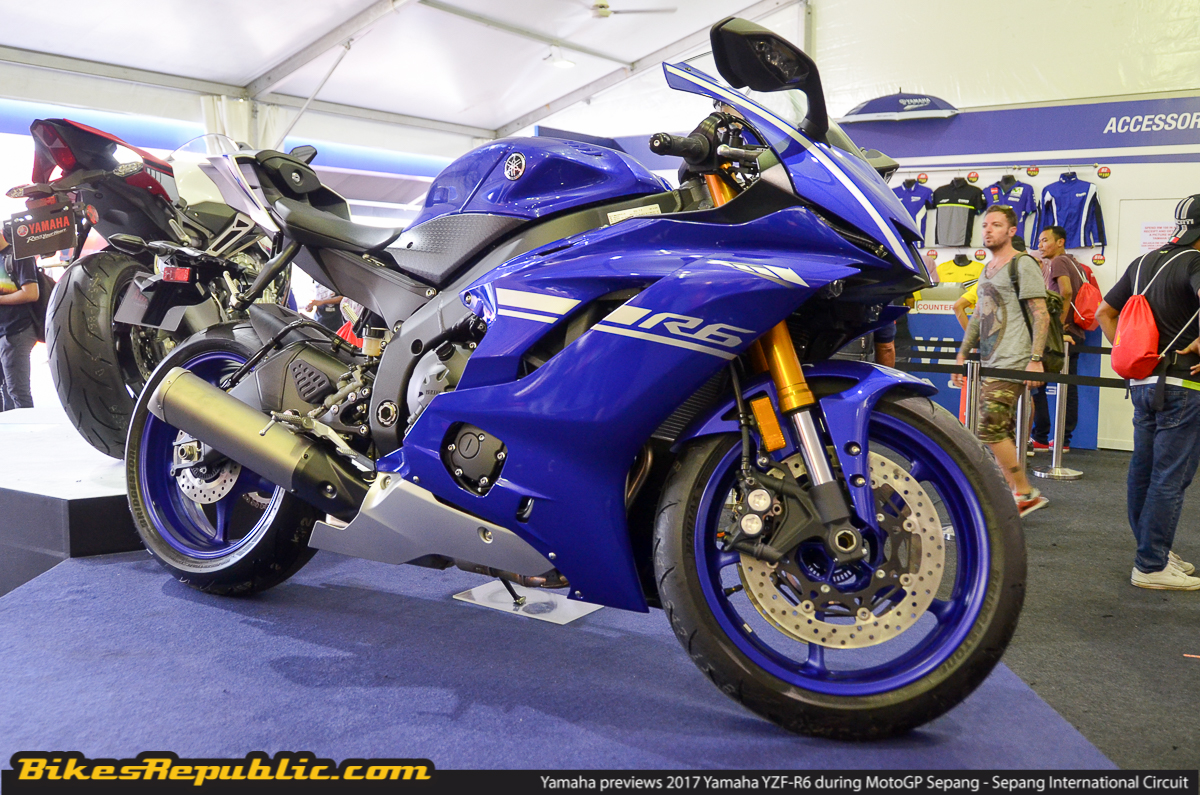 Powered by a reworked 599cc, DOHC, liquid-cooled, four-cylinder engine, the new R6 generates a whopping 116.8hp at a screaming 14,500rpm and 61.7Nm of maximum torque upon hitting 10,500rpm. Equipped with titanium valves, forged pistons, direct-plated ceramic-composite cylinder bores, the engine is meant to produce maximum power from a minimum and lightweight package. 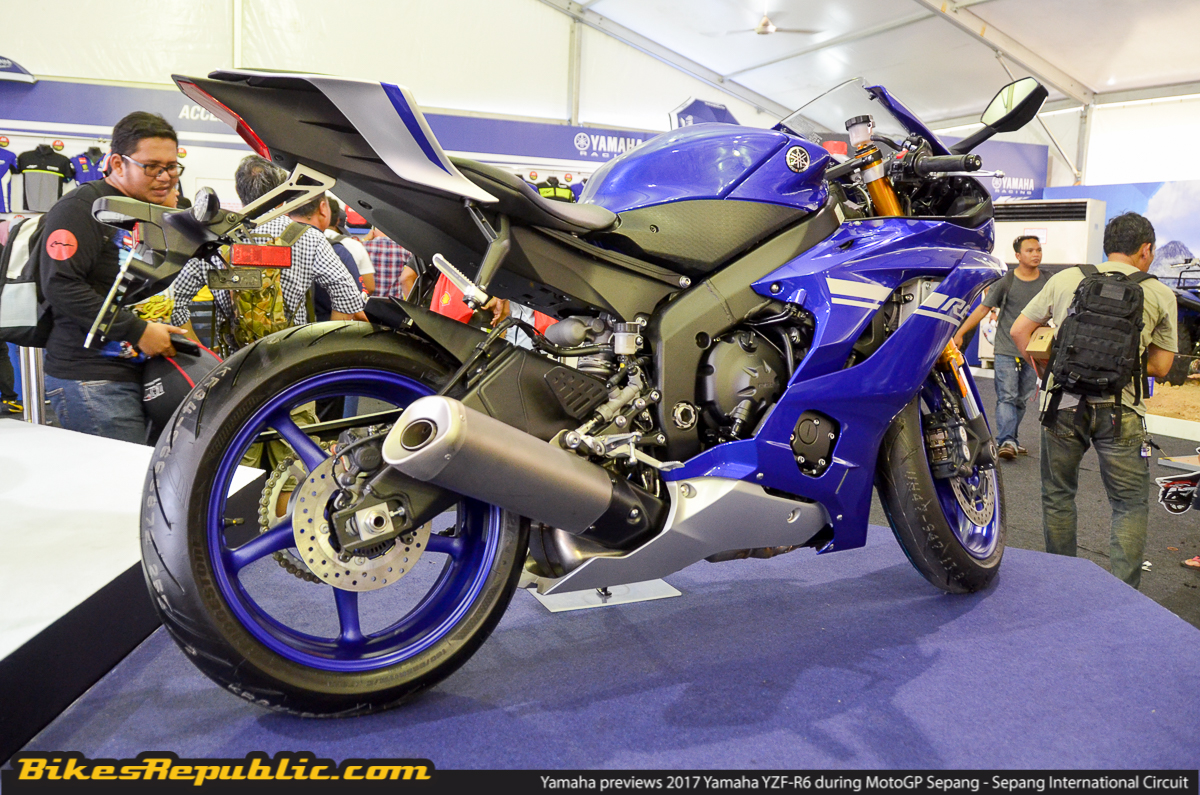 Although Yamaha could’ve done something to make the titanium exhaust more beautiful to go along with the cutting edge theme, it was designed for optimum mass centralization. In addition, it also houses Yamaha’s EXUP (Exhaust Ultimate Power Valve) which offers a wider and more exciting powerband to the rider. 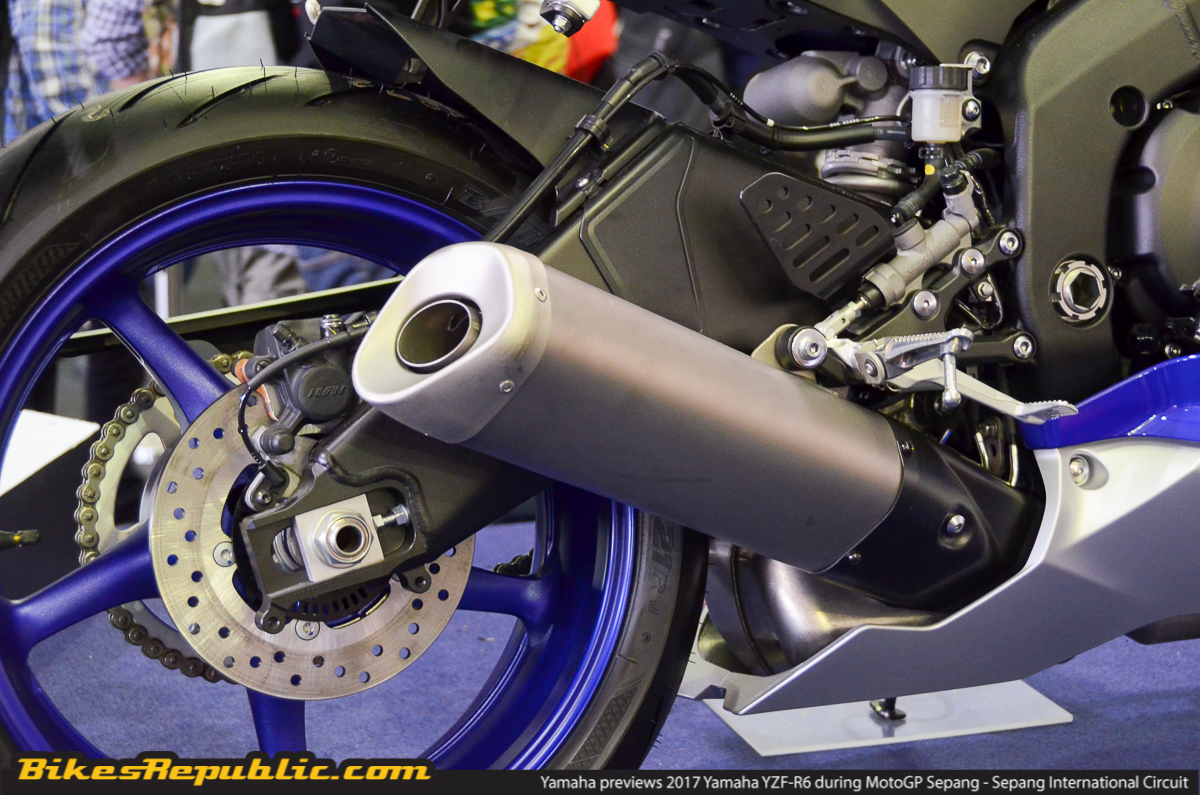 To make it more enticing, parts from the Yamaha YZF-R1 were taken and installed on the R6 to ensure maximum performance, handling and overall riding experience. These parts include the suspension, brake and styling packages which were also somewhat inspired by their legendary race-only Yamaha M1. 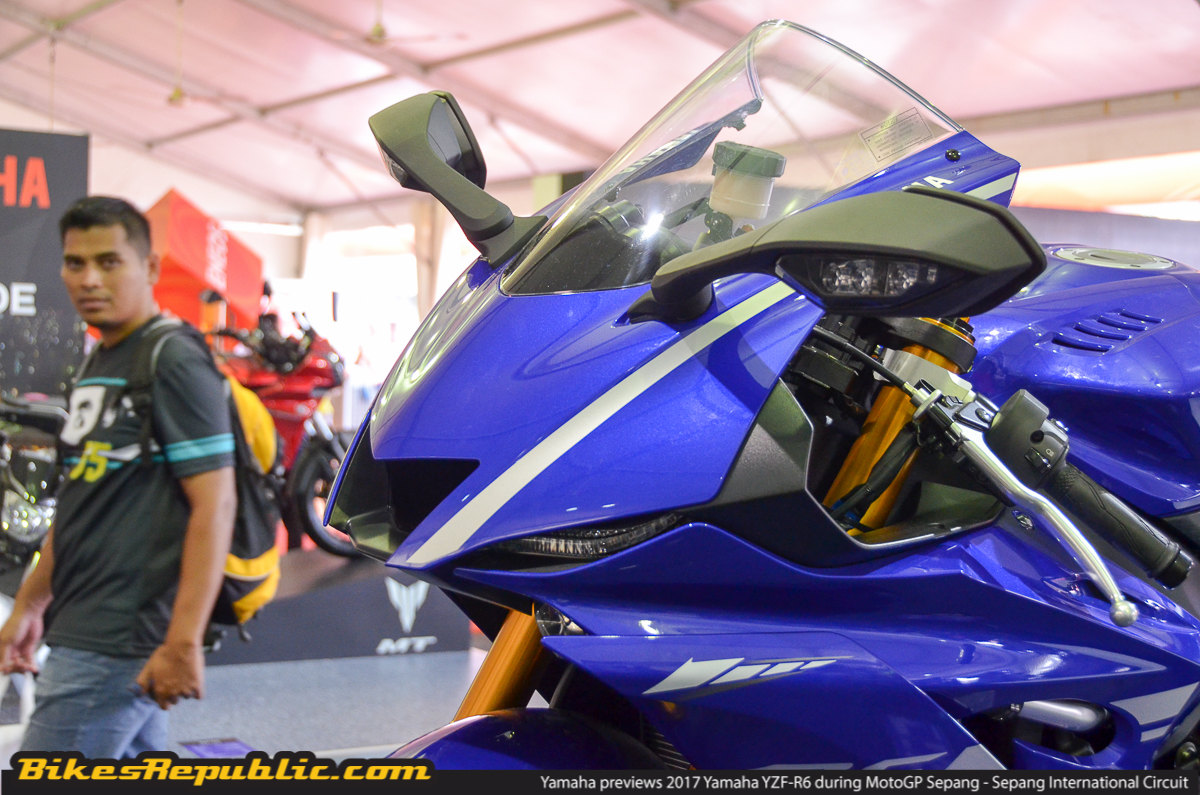 In terms of pricing, we know for a fact that the 2017 Yamaha YZF-R6 is available in the US for a mere $12,199 (around RM51,571 after direct conversion). If the bike is made available here in Malaysia, we won’t be surprised if the price hits way above the RM80,000 mark. Whatever the case may be, it is one hell of a beautiful bike (apart from the exhaust). 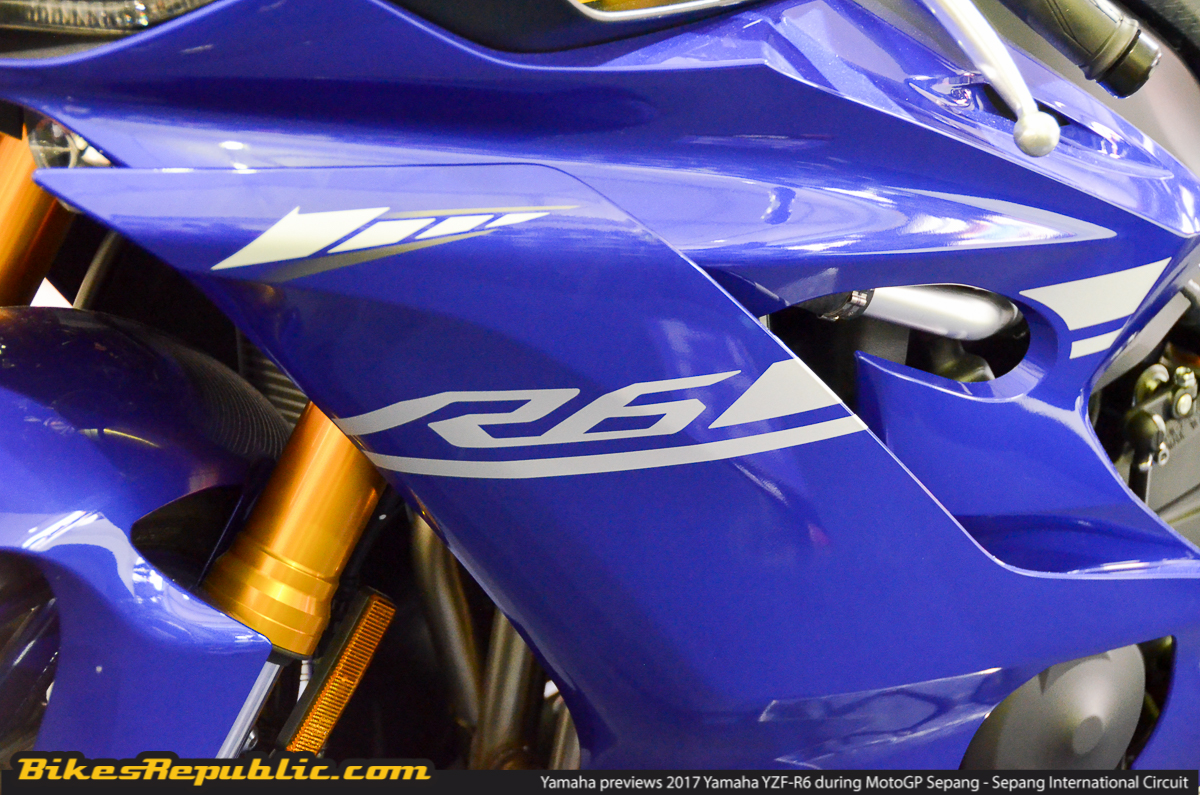 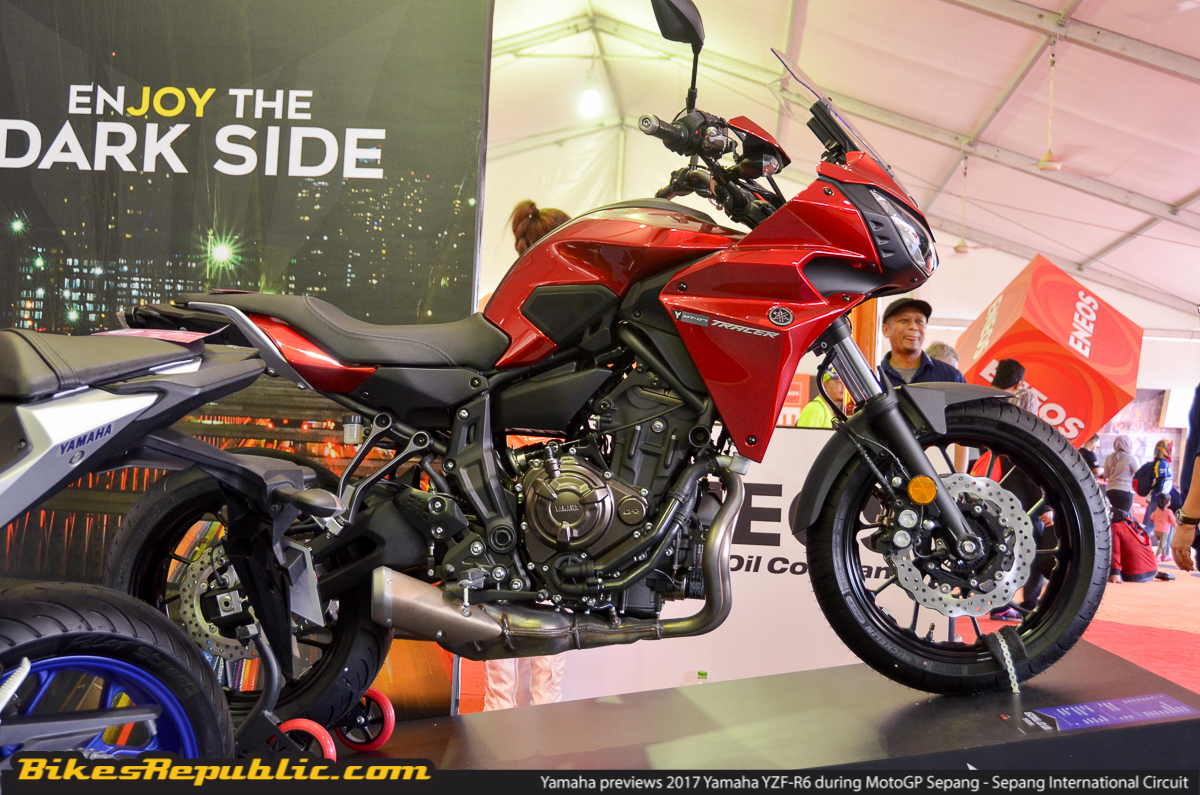 Other bikes that were also previewed in the Yamaha pavilion were the 2017 Yamaha YZF-R1S, MT-03, MT-07 Tracer, SCR950 and XSR700. All of these bikes would indeed send some excitement IF they’re made available in the near future. Only time will tell if that’s just a dream or will emerge itself into reality. 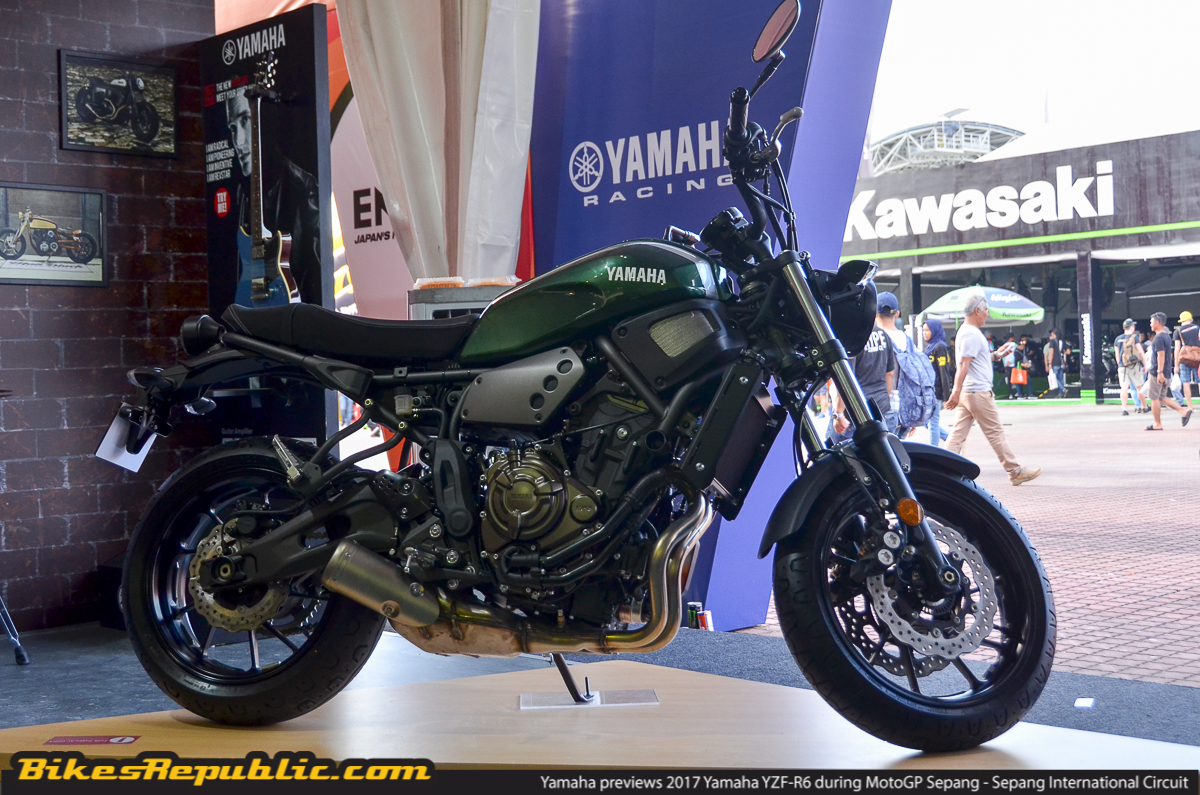 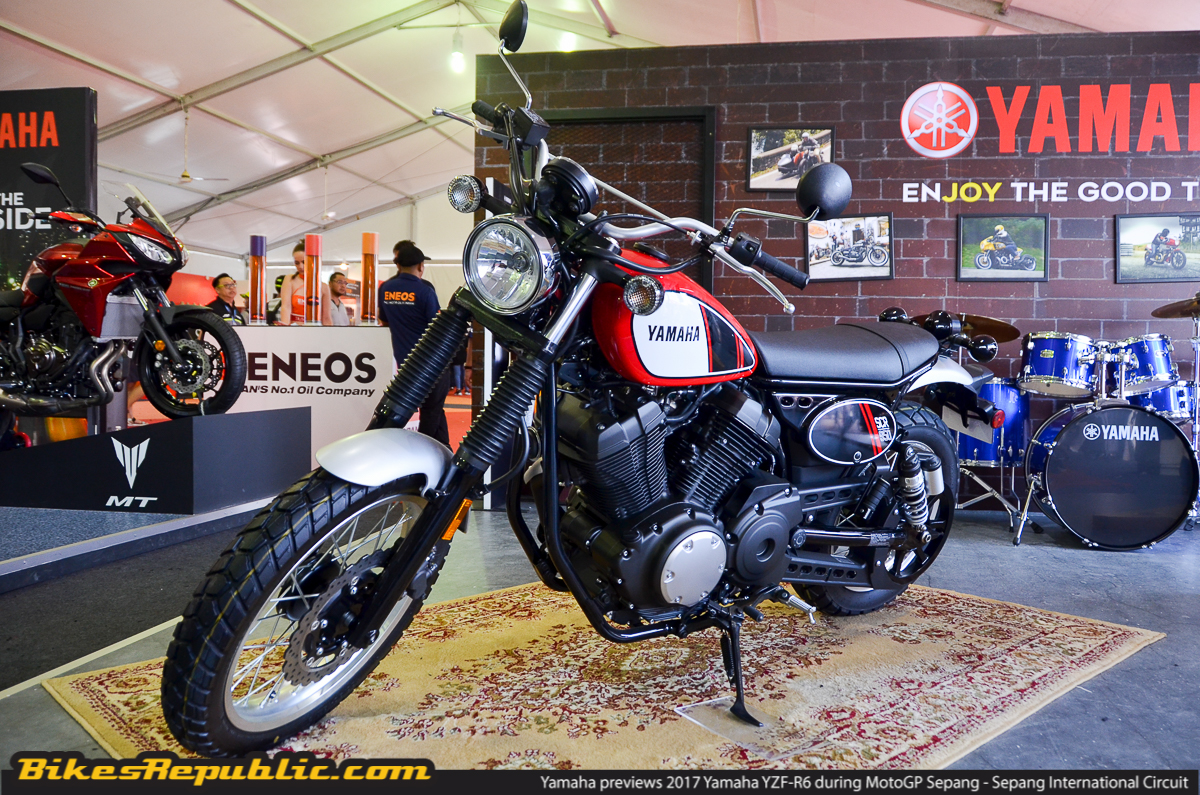 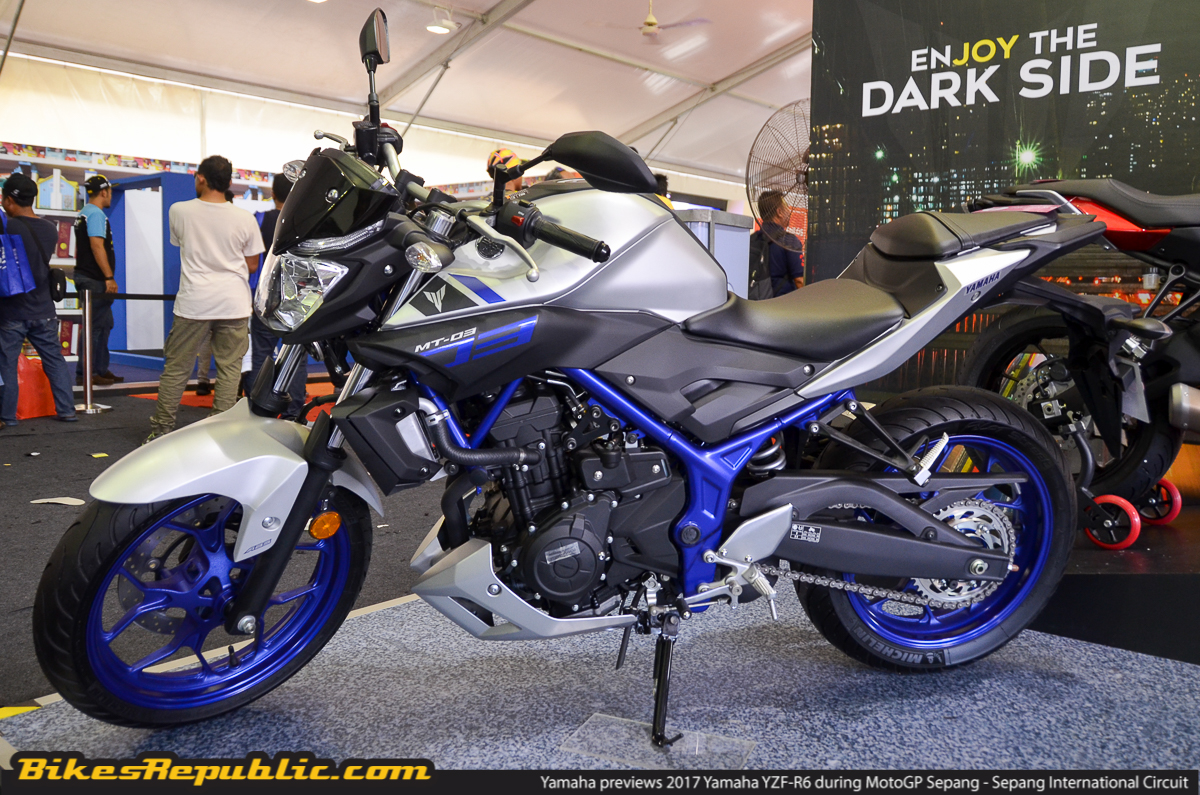 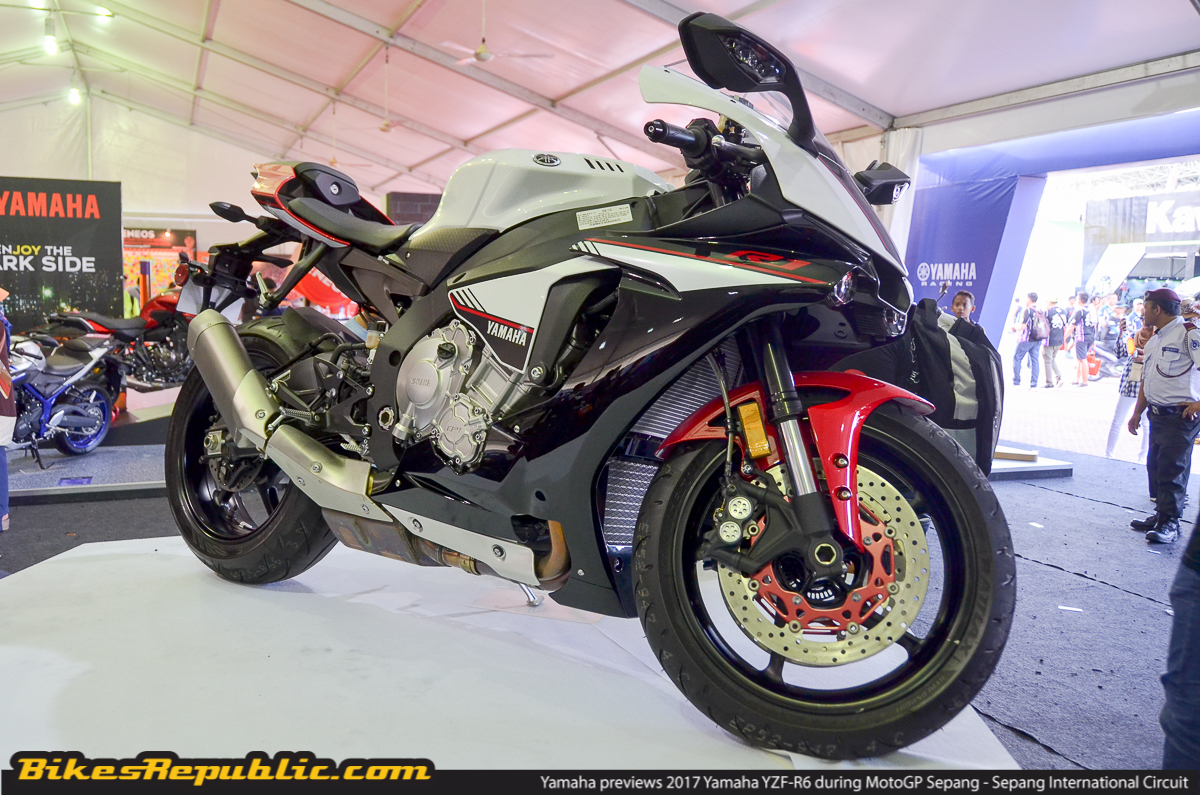