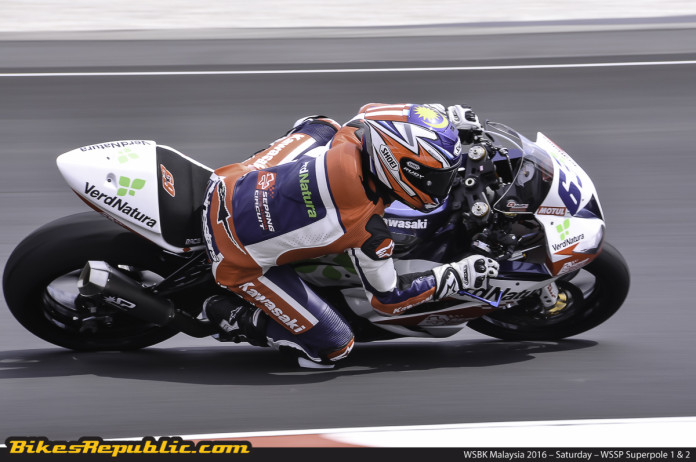 Out of the 26 riders that went out during the WorldSSP Free Practise 1 session, our hometown hero Zulfahmi Khairuddin managed to secure the fifth fastest position this morning. The testing session was however cut short due to heavy rain conditions. Zulfahmi only managed to complete 11 laps before the weather turned against them.

The highlight of the testing session was on Jules Cluzel, the Frenchman from the CIA Landlord Insurance Honda outfit. With his Honda CBR600RR, he managed to clock a 1:35.365; almost 0.9 seconds faster than the current WorldSSP Champion, Kenan Sofuoglu (Kawasaki Puccetti Racing). Although Sofuoglu only managed to set the sixth fastest time of the session, it was impressive considering that it was his first time on the bike following an injury during the winter.

The FP2 session did not see much improvement due to the wet conditions of the track. Only 15 riders went out before deciding that the track wasn’t anywhere close to perfect to set quick lap times. The combined practise times saw Roberto Rolfo from Team Factory Vamag as the second faster rider with a time of 1:35.559 on board his MV Agusta F3 675. Kyle Smith from GEMAR Team Lorini completed the top three by finishing over half a second behind Rolfo.