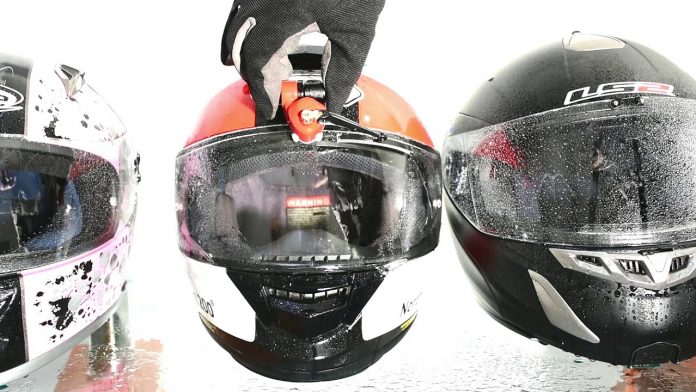 There are times when we feel envious of car drivers. Like during the current weather: Heat that feels like it’s going to roast your brain inside your helmet, and rain so heavy it’s like standing under a waterfall. Car drivers have air-conditioning to deal with the former, and wipers to keep their windshields clear in the event of rain.

For us bikers, the the most irritating and dangerous thing to happen during a rainstorm is loss of vision. Rain water or droplets stick to the helmet’s visor, robbing us of vision.

We’ve tried coating Rain-X Plastic on one of our helmets’ visor, but some water still sticks. The water droplets only started rolling upwards at high speeds. Besides that, the product is nigh-impossible to find!

There’s probably going to be a solution soon. Well, if this Kickstarter crowd-funded product takes off. From Slovenia and called the “Wipey,” it’s a self-contained mini wiper for the helmet visor.

First, the rider installs the mount on top of the visor before clipping the Wipey onto the mount. The mounting position doesn’t impede on the Pinlock insert. A single button activates the wiper blade and multiple presses turn on different speeds. The unit is powered by a 3V battery. There’s also an option for a handlebar-mounted Bluetooth controller.