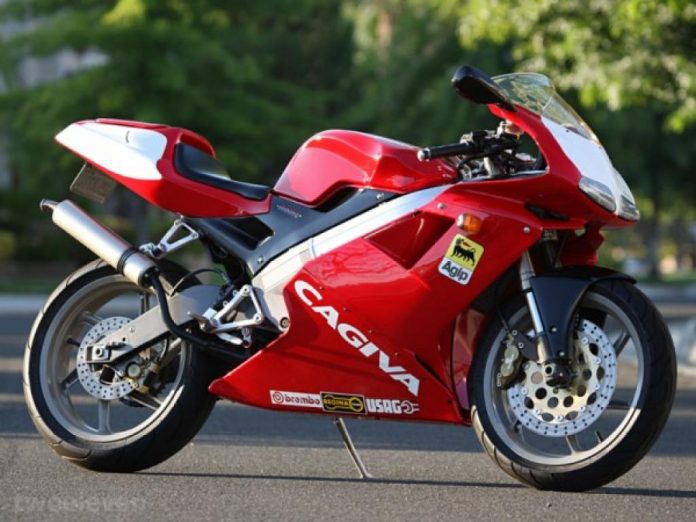 Cagiva. A name as hallowed in motorcycling as is storied. The brand’s history had so plot changes that it’ll turn viewers’ brains inside out if it was made into a movie.

They were even owned by our Malaysian automaker Proton at one time. Hey, wait a minute there! Wasn’t that MV Agusta? Yes, it was MV Agusta but it was also Cagiva. We can see question marks popping up everywhere around your heads now.

And where is Cagiva now?

Okay, okay, we’ll spare you the torture, and here we go (along with a pot of industrial-strength coffee).

The name “Cagiva” was actually derived from the founder’s name and the location of the factory: CAstiglioni GIovanni from VArese, Italy. It’s a norm among Italian companies and certainly among automotive companies there. For example, the later Bimota was an amalgam of BIanchi, MOrri and TAmburini.

Anyway, the company began in 1950 as a producer of small metal components.

The company was purchased by the sons of Giovanni in 1978 and they began producing motorcycles when they purchased the AMF-Harley-Davidson/Aermacchi factory, also in Varese. Thus the eight 125cc to 350cc two-stroke bikes were rebadged as Cagivas. Sales hit 40,000 units in 1979.

Cagiva became one of the strongest companies at the time, which saw then grow to a conglomerate, like how KTM is today (which is probably like the Microsoft in motorcycling).

You see, Italy produced and still produces the most beautiful motorcycles that usually did well in racing, but the manufacturers inadvertently got mired in financial troubles, and ended up either bought out or folded up. Not so with Cagiva.

Within seven years of producing motorcycles, they bought the Ducati brand in 1985. The company decided that Cagiva and Ducati motorcycles were produced side-by-side since the latter’s name is more well-known outside of Italy.

The Group also purchased Moto Morini in 1985, followed by Husqvarna in 1987 and trademarks to MV Agusta in 1991.

The 1980’s was a heady time for the manufacturer.

They had produced dirt bikes and there began a massive campaign in North America to promote them. Their bikes were powerful and featured a number of innovations ahead of their time. Most notable among them were forks that was for preload in one leg while another controlled the damping. It’s only now we see “separate function forks” being popularised.

Armed with those weapons, Pekka Vehkonen and David Strijbos won the World MX 125cc titles back-to-back in 1985 and 1986. The company also secured the 125cc contractor’s title in 1987.

It was during this time that the factory made their forays into 500cc Grand Prix racing, employing Randy Mamola from 1988 to 1990. He achieved one podium finish. Eddie Lawson joined in 1991 and won the 1992 Hungarian GP. John Kocinski was the last addition in 1992, and rode the ever beautiful C594 to third overall in 1994.

It was also in 1985 that the most important motorcycle designer joined the Cagiva Group. His name was Massimo Tamburini.

Tamburini was one of the founders of Bimota. As with most designers in Italy, they are also engineers. But Tamburini was a hands-on guy as well, often welding the frames he developed at Bimota.

He wasted no time and produced the Ducati Paso 750 in 1986. It may look ungainly (some likened it to a pregnant whale) with its fully-enclosing bodywork, but it went on to inspire other bikes which cemented Ducati’s name: The 851 and 888 superbikes, plus the 900 SuperSport/SS road bike.

The company set up the Cagiva Research Centre (CRC) in 1987, which Tamburini headed. This was why period Ducatis had CRC badges. There were also other well-known designers at CRC including Pierre Terblanche and Miguel Angel Galluzzi who joined in 1989.

1989 saw the birth of the first Mito. This zippy 125cc sportbike became the favourite of teens everywhere including one young Valentino Rossi. The model went through a number of iterations and became the main challenger to the Aprilia 125 Futura and then the RS125, albeit not on the tracks.

Cagiva kept a strong presence in the offload racing scene, contesting in the Paris-Dakar Rally. They were rewarded with a win by Edi Orioli on the Cagiva Elefant in 1990. The pairing would repeat the feat in 1994. The Elefant used a Ducati 90cc air-cooled V-Twin shared with the 900SS.

But the real domination period began when…… drum roll, please…. Ta-da! the Ducati 916 was unveiled in 1993 (for MY1994). The entire world went ga-ga, bananas and everything else in between! One journalist wrote that people only remembered the 916 in 1993/94 but couldn’t recall what else came out that year . The 916 would spawn the 748 a year later.

While the 851 gave Ducati their first World Superbike title and was followed with two more by the 888, the 916 hit the tracks and dominated in the hands of a tempestuous and now-legendary rider, Carl Fogarty.

At the same time, Galluzzi designed the M900 which the factory’s test riders nickname “Il Monstro” (The Monster) due to its hooligan-inducing behaviour. It was thus known as the Ducati Monster henceforth. 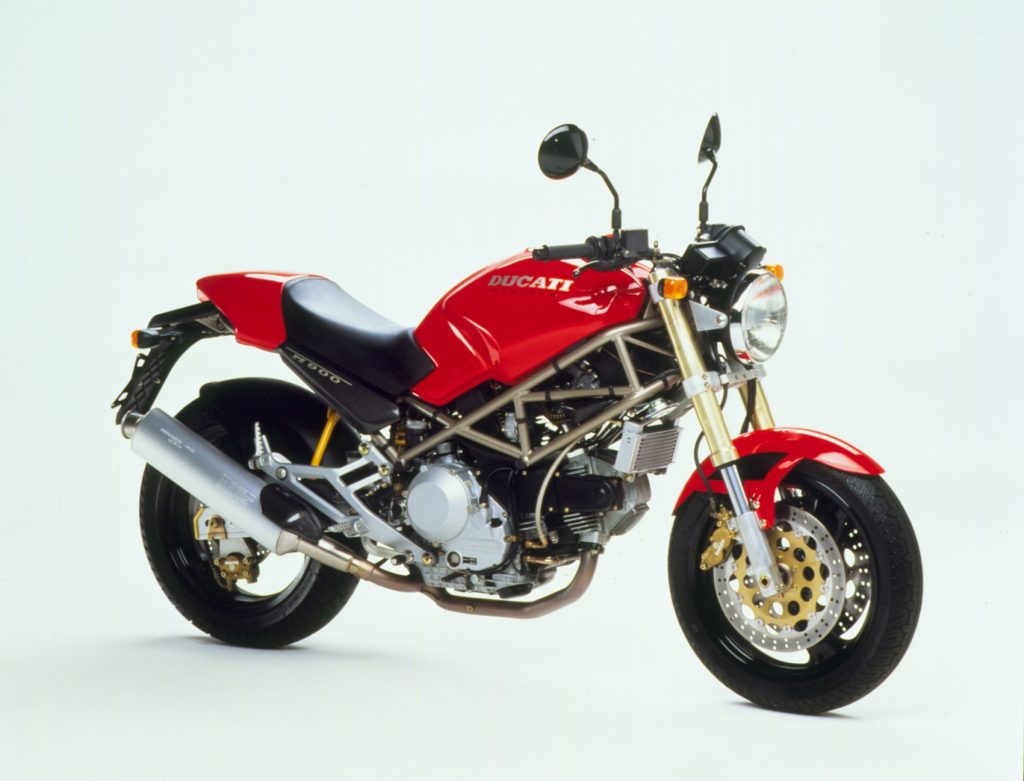 But it seems that history has a knack for irony. While Ducati was kicking butts and taking names on the racetrack with the 916 and its later derivatives, they soon found themselves in financial trouble.

Sure, everyone had wanted a 916 but it was too expensive, hence the job of saving Ducati’s name fell to the Monster.

While the 916 continued its form on the racetracks, Cagiva began to focus more on the MV Agusta brand. Cagiva finally sold the remainder of Ducati’s shares to TPG in 1996 and concentrated on MV Agusta. They also offloaded Moto Morini.

And in 1999, they released the show-stopping MV Agusta F4 Serie Oro (Gold Series), designed by none other than Massimo Tamburini.

Since then, only the MV Agusta name was often used and the company itself went through many acquisitions, reselling and reacquisitions.

First, it was purchased by PETRONAS/Proton in 2004. But just a year later, Proton decided to let the brand go. Proton Chairman at the time Datuk Mohammed Azlan Hashim said that keeping MV Agusta would bankrupt the Proton. The company was sold it to the investment group GEVI for a token € 1.00 (excluding accumulated debts).

GEVI restructured the company and sold Husqvarna to BMW.

Harley-Davidson bought MV Agusta from GEVI in 2008 before being bought back in 2009 by Claudio Castiglioni.

But the Cagiva name lived on, contrary to popular belief, in the Mito which went on to the final model in 2012.

Fast forward to 2014, Mercedes-Benz purchased a 25% stake in the brand and marketed the bikes under the AMG banner, no doubt as to rival Ducati who are now owned by Lamborghini under Audi AG, which is itself under the VW Group.

But by 2016, the company was again in trouble which included a € 40 million debt while Mercedes absolutely refused to inject more capital into the venture. As such, Giovanni Castiglioni decided to buy back the shares but could not obtain the funds. The production line had stopped and there was no spare part for their customers. In view of this, the company filed for a temporary order to protect itself from creditors while attempting to look for investors.

Thankfully, the Black Ocean Group headed by Timur Sardarov (no “John Wick” jokes please, just sayin’) stepped in with the much-needed capital in 2016.

Since then, MV Agusta has grown from strength to strength and have just announced another round of investments recently. The company knows that only a select few could afford premium motorcycles hence tying up with the Loncin Motorcycle Company in China to produce bikes between 350cc to 500cc for the Asian market.

So there you go. While the Cagiva name is no more, MV Agusta is still Cagiva. And the other way around.