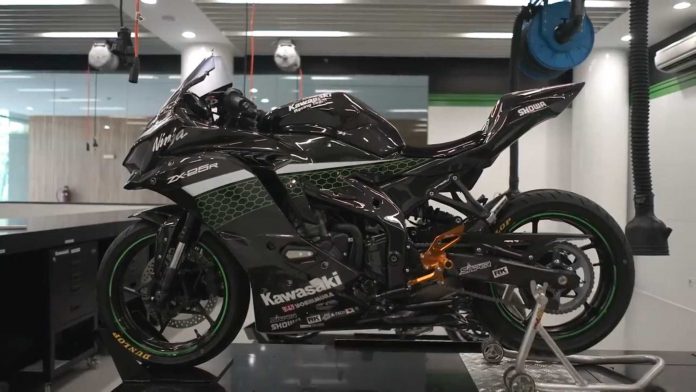 We can’t see why not: a screaming 250cc, DOHC, 16-valve, inline-Four engine, upside down forks, quickshifter, etc. It’s been a long time since we’ve had a 250cc inline-Four, so the bike would most probably still get plenty of interest just for the engine without everything else.

But Kawasaki Indonesia is taking it a few steps further, by creating a track weapon out of the bike.

First off, the bodywork’s replaced with an all-carbon fibre set by A-Tech Japan. Look closer and you’ll see that the frame and subframe are carbon too! The body is then given the “mesh” graphic, first seen on the Kawasaki Ninja ZX-RR MotoGP bike. The tail definitely looks similar to the Ninja ZX-6R and Ninja ZX-10R.

The metallic orange coloured footpegs are hard to miss, too.

But we think there’s still more to come, as they have not touched the suspension, brakes, ECU, engine and exhaust system. It’ll also be interesting to see what they would do to the bike’s rider aid electronics and such.

Will we see this kind of effort in Malaysia when the Kawasaki Ninja ZX-25R makes it here? You betcha!