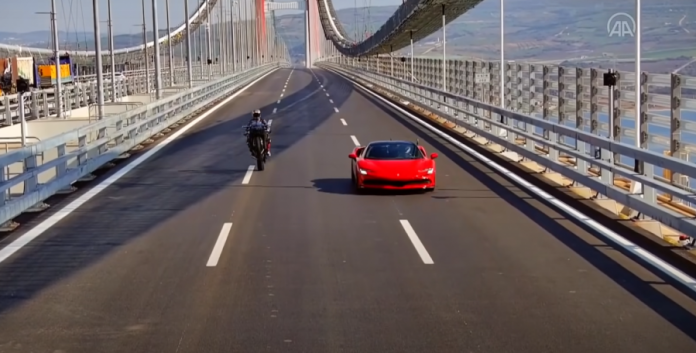 Here’s Kenan Sofuoglu and Toprak Razgatlioglu racing each other across the Canakkale 1915 bridge.

In what appears to be another publicity stunt, it sees both Sofuoglu and Razgatlioglu go head-to-head across the 4,608-metre-long bridge using a Kawasaki Ninja H2R and a Ferrari SF90 Stradale respectively.

This isn’t Kenan Sofuoglu’s first ‘race’ on this particular bridge. The retired five-time World Supersport (WSSP) champion previously charted an epic 400km/h run aboard his ‘tweaked’ Kawaski Ninja H2R. It appears Sofuoglu returned to this bridge this time round astride the same bike.

His compatriot and recently crowned World Superbikes (WSBK) champion Toprak Razgatlioglu also took part in this recent stunt, albeit on four-wheels instead of two. His weapon of choice happens to be the Ferrari SF90 Stradale – the marque’s renowned 1,000bhp hybrid petrol-electric V8 supercar.

The ‘race’ saw both racing stars battle it out across a 2,000-metre stretch of the famed bridge. Clearly, this was not as straightforward as many would think given how much work Sofuoglu had to put in to keep his Ninja H2R planted – no doubt, the beastly hyperbike needs a true professional to wrangle it straight.

Razgatlioglu, on the other hand, had it somewhat easier. The SF90 may pack a claimed combined 1,000bhp output to power all four wheels, but it benefits with plenty of F1-derived tech (launch control, traction and stability controls, etc.) on top of two extra wheels to keep it straight and true.

Though the end result is somewhat predictable, this was somewhat a thrilling battle to watch…