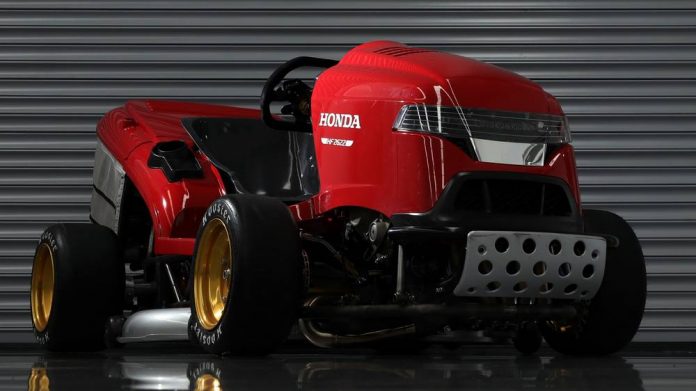 To recap, Honda UK and Team Dynamics (Honda British Touring Car outfit with factory support) stuffed a Honda CBR1000RR SP engine into a Honda HF2622 sit-in lawn mower. The stock engine, transmission, clutch and ECU went in wholesale, supported by a custom frame. The SP engine produces 189 hp and 115 Nm of torque, and sent to the four wheels by chain.

In order to compete for the Guinness World Record as a lawn mower, it must first appear like a lawn mower and be able to still cut grass.

The team concentrated on achieving the fastest 0 – 100 mph (161 km/h) time instead of outright top speed. The mower needs to complete two runs in opposite directions within the hour. The times for both runs are recorded and averaged for the final result.

Jessica Hawkins was chosen to drive the machine. She’s one of the stunt drivers in the Fast & Furious movie franchise and also competes in go-kart and single-seater races.

That’s faster than some supercars, and it still does your lawn, by the way.