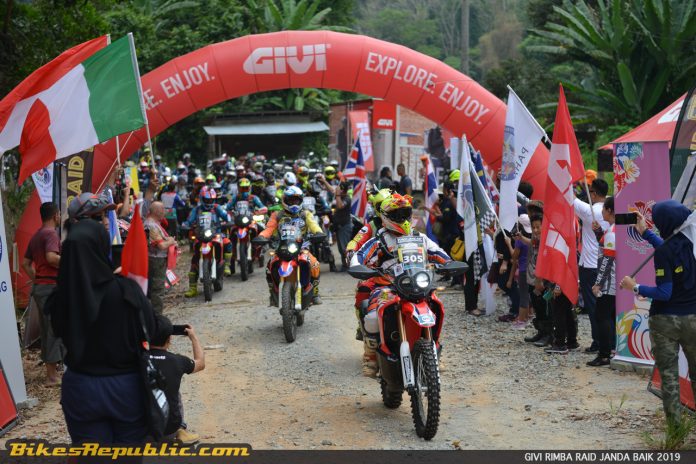 GIVI Rimba Raid at Janda Baik 2019 may be over for close to two weeks now, but many are still reminiscing over the biggest and best edition to date.

The scars may have healed, broken bikes fixed, the glow of winning slow fades but memories will remain forever with the competitors.

Surely the spectators who showed up in droves were amazed to no end seeing heavyweight (read: expensive) adventure bikes being used for such purpose instead of blasting down Karak and parked outside Nanyang Kopitiam and Starbucks Gohtong Jaya (10% discount here for “BMW bikers” says the receipt, but they give it to all big bikers). Perhaps it was even more heartwarming to see the excitement of the children. Who knows, they may dream of owning such a bike when they grow up.

The GIVI Explorers who rode in with the GIVI Malaysian Adventure 2019 were equally, if not more awed at the event. Bear in mind that among these men and women from 16 different countries have large motorcycle rallies in their backyards. For example, Jeremias Israel who was an ex-HRC Dakar Rally rider who also took park in other world-class rallies. The Chilean even took part in the Janda Baik race and came away mighty impressed with the event and may well return. And then there were GIVI Explorers from Australia, Mexico, Thailand, Italy, and so forth. These are nations where motorcycle rallies are the norm. Yet, they were impressed with the organization and scale of GIVI Rimba Raid.

But if the event was amazing, it’s due to the extraordinary effort and hard work put in by the organizers led by Dato’ Captain Nik. He had only a number of people to rely on. It wasn’t merely a case handing the competitors their jerseys and telling them to ride through the jungle. If planning a trackday was hard enough, no amount of imagination can tell you how hard it was to plan and execute GIVI Rimba Raid. And yet there were critics.

Let’s not forget GIVI, of course. Together with the Rimba Raid crew, the GIVI crew had spent four days and nights to set up Kampung GIVI, ILMU and the surroundings along the track andoff the track.

Which brings us to the motorcycle manufacturers and sponsors. We have one question: Who says off-road riding on dual-purpose motorcycles isn’t a big thing?

BMW Motorrad sees the event as an opportunity, hence sending in their dealers (Auto Bavaria this time) at each edition, since many competitors ride the GS anyway. Ducati had the presence of mind to brand their Scrambler albeit last year, as they had to consolidate at Art of Speed this year. Bombardier were there to promote their latest side-by-sides, buggies and ATVs. But where was Honda? Yamaha? KTM? The field was filled with bikes from these brands. A little support to the competitors riding their brands would’ve gone a long, long way.

Anyhow, we hope that you enjoy the video. We can’t wait for the next GIVI Rimba Raid.