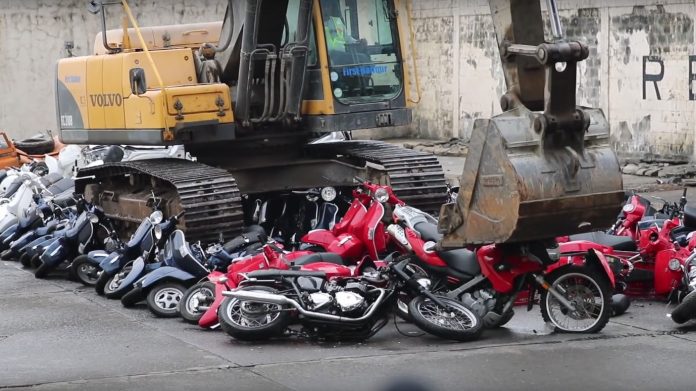 The Philippines government, led by President Rodrigo Duterte, continues their no-holds-barred war against the drug trade by crushing illegally imported motorcycles and other vehicles, valued over $ 640,000.

Approximately 100 motorcycles, including Vespas, a BMW, a Harley-Davidson and a Triumph were lined up for death by excavator. The executions of the bikes were carried out in the country’s capital Manila, while several luxury cars and SUVs were destroyed at Cebu city. The bikes have done nothing wrong of course, but Mr. Duterte wanted to send a clear message that crime doesn’t pay. That and taxes needs to be paid, of course.

The President is an avid rider himself and was present at the Manila site. He grimaced when the Harley was crushed, commenting, “When the excavator crushed the Harley it’s like I also got hit in my neck. What a waste.”

Then, why did he order the destruction?

The motorcycles could have been auctioned and the proceeds could go on to fund the Philippine government’s war chest on drug lords, after all. Or sell them as the same price as low-mileage demo bikes? He had come under much criticism for destroying the cash-convertibles since the destruction of 20-odd luxury cars in February.

Well, Mr. Duterte explained that the auction system is equally corrupt and the contraband or proceeds may just end back up in favour of the drug dealers.

But let’s be frank, Mr. Duterte is a showman, and he has to show that he is serious in carrying out his job, given how volatile Philippine politics is. He’s also sending the message that he fears no one, especially smugglers.

Click on the video below and let the pain flow.