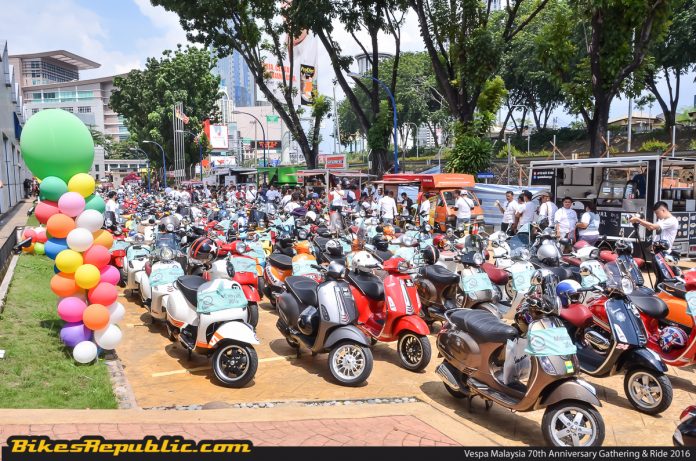 Last weekend, the BikesRepublic team was fortunate to have taken part in a different sort of ‘rally’ that celebrated the 70th anniversary of iconic Italian brand Vespa. Naza Premia Sdn Bhd, the brand’s exclusive Malaysian importer and distributor, opted to take on the gargantuan task of organising the inaugural Vespa Malaysia 70th Anniversary Ride & Gathering event. 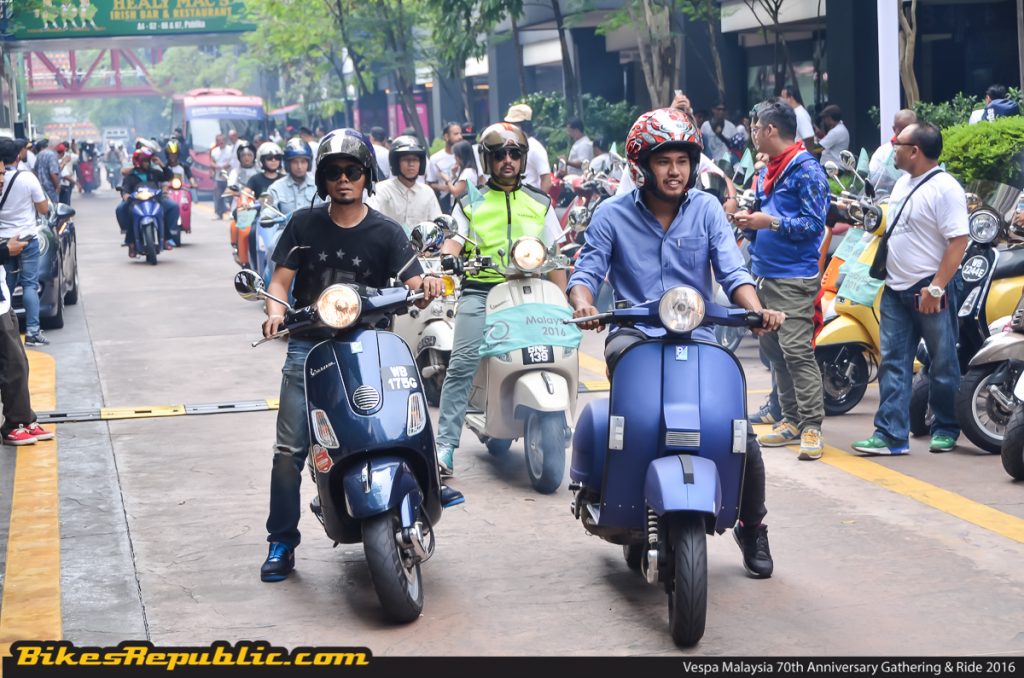 The anniversary fiesta was held on Saturday in the swanky and posh Publika Shopping Gallery, Mont Kiara and organisers wanted to start everything with a bang in the Naza World Auto Mall, Petaling Jaya first. That’s where the record-breaking group ride was assembled first before rolling out altogether. How big was the convoy? Over 500 Vespas! 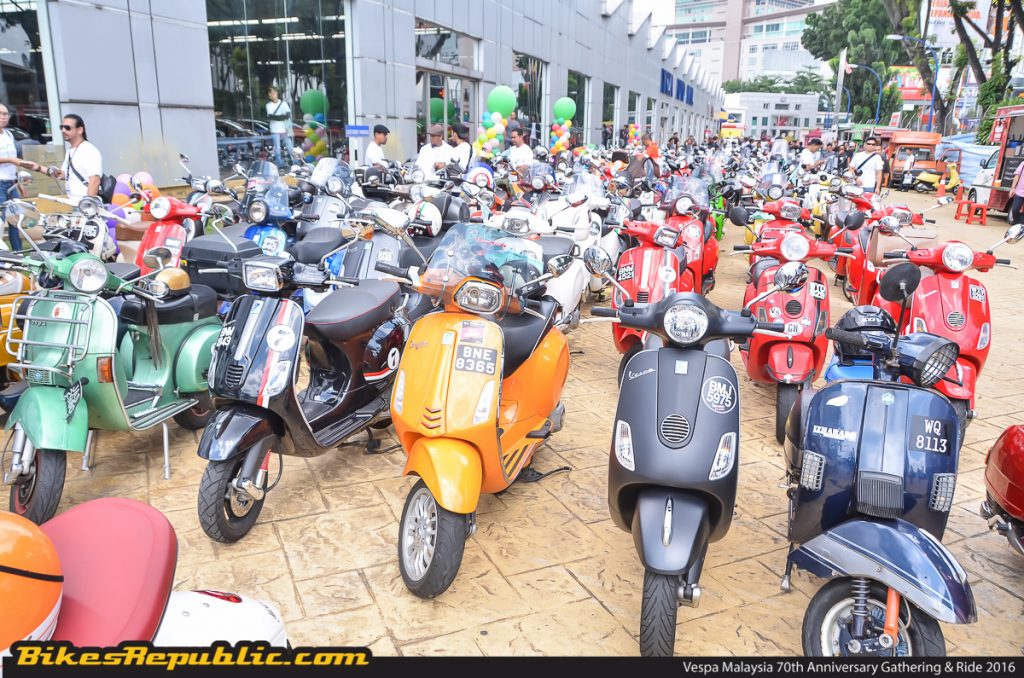 This was probably the largest gathering and convoy ride comprised exclusively of both modern and classic Vespa bikes ever held in Malaysia to date. The convoy featured a great number of both modern and classic Vespa models from all generations, and the same can be said about their owners hailing from all corners of the peninsula. Some even dressed up accordingly for the occasion! 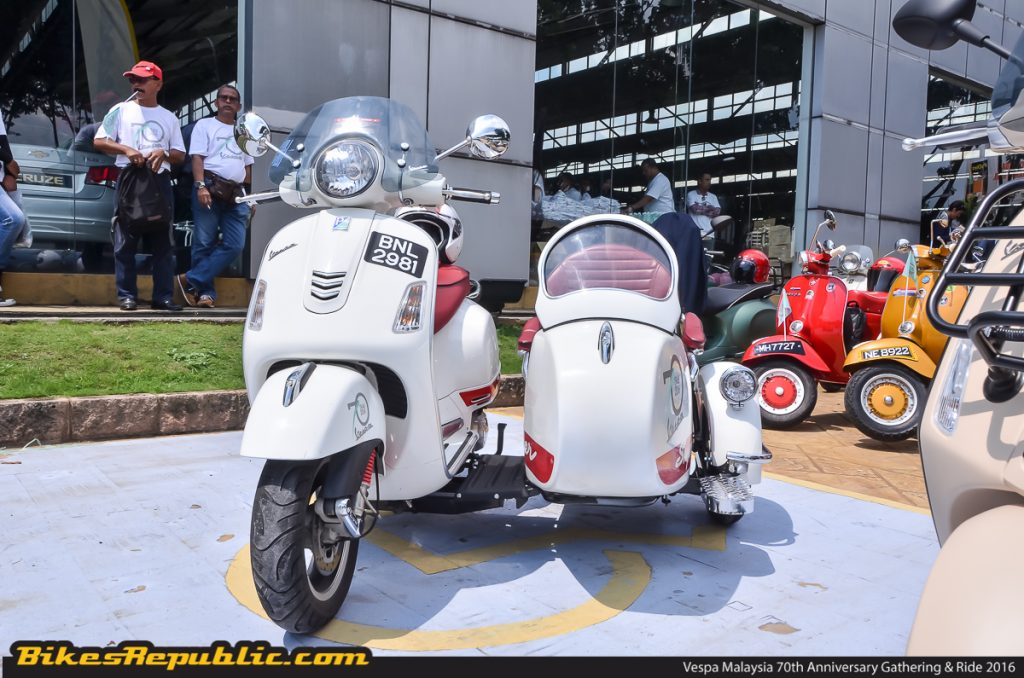 Of course, there were also a few rare jewels in this stylish and chic sea of Vespas. Highlights included a handful of the stylish Vespa 946 and its uber-exclusive Emporio Armani version, and there were even a few of the newly launched Vespa Sprint Adventure. However, none stood cooler than the lone Vespa GTS 150 Super Sidecar that led the convoy.

And in the midst of fans and owners that signed up for the ride, there were also few local celebrities in their midst. Notable presence here included legendary rock star and Vespa enthusiast Amy Search, as well as our friend and Johore-based social media biking magnate Miazil Jores.

Mom, I’m bringing a few friends over for dinner 😂 an amazing 500 over bikes turned up to @vespa_my 70th Anniversary in KL, Malaysia. Thank you all for joining the ride! And thank you everyone for the fun, the gifts, the lucky draw bike (Lucky winner was a babe! Yes to more girls on wheels!!!) , and the great performance from @akuamysearch (who also joined the ride with beautiful @kupu_kupu , husband and kid! ). Till next year! 🏍💨 see you guys! #vespamalaysia #vespamy #vespa70

With the help of a few marshals and the Royal Malaysian Police (PDRM), this large and stylish convoy was flagged off from the Naza Auto Mall at about 3pm for the ride to Publika. Though it was a short ride that covered merely 15km, organisers Naza Premira Sdn Bhd, deserve some applause here for ensuring the safety of all riders involved. 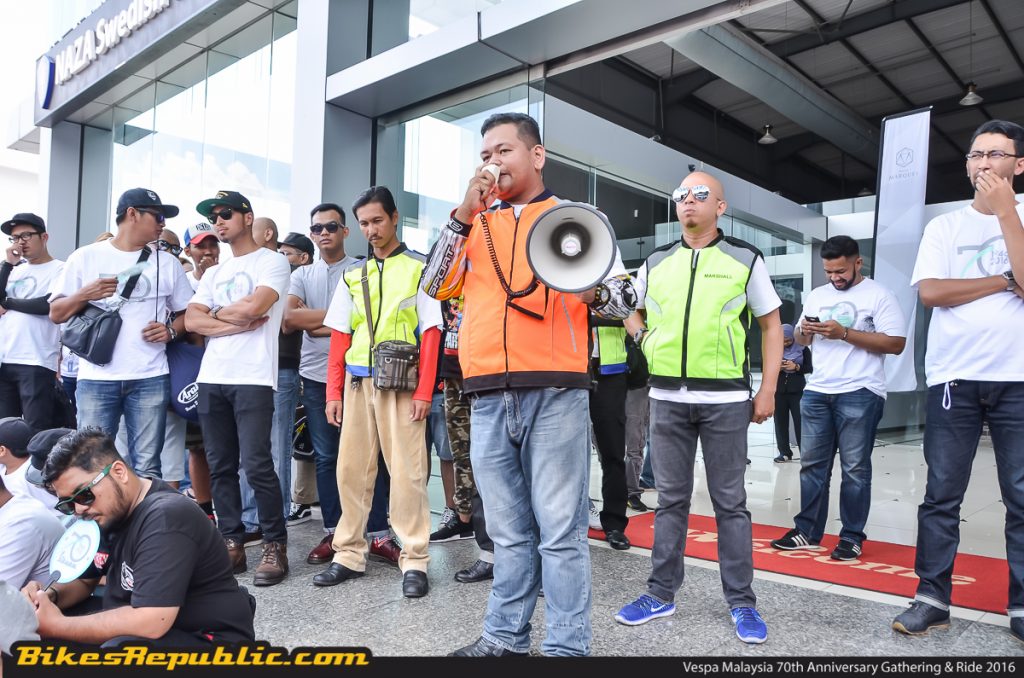 Furthermore, the ride made up for its short travelling distance in its size and scale of coolness. In other words, the sight of over 500 Vespas rolling through Petaling Jaya, the Sprint Highway’s Phileo Damansara stretch, Sri Hartamas and Mont Kiara enroute towards Publika was definitely a special sight for all – participants and other motorists alike – to bask in. 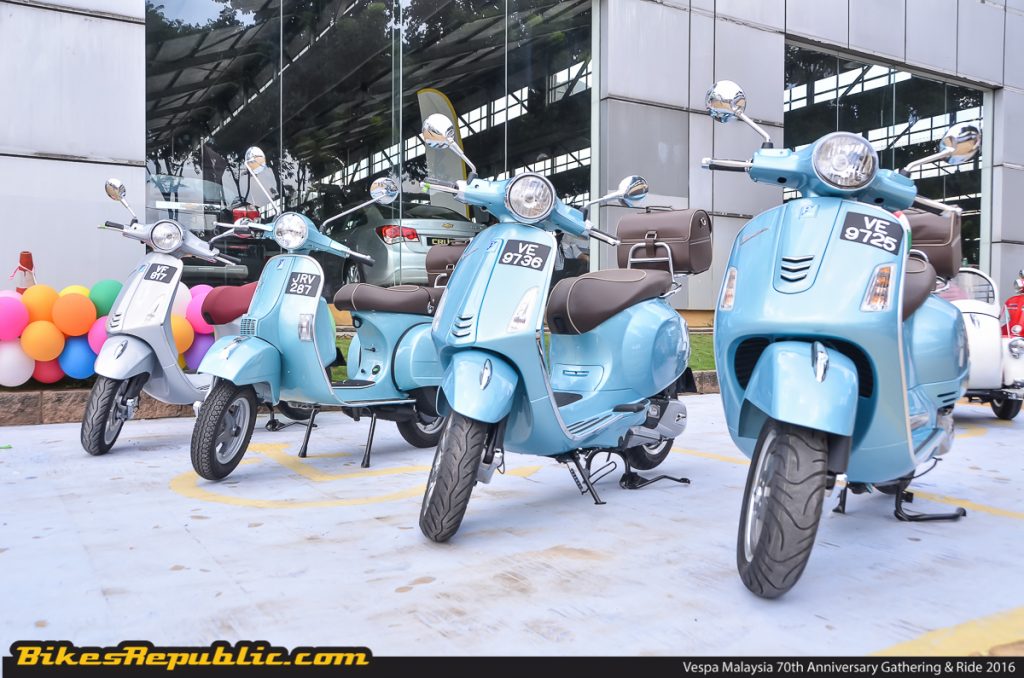 After dodging the rain and reaching Publika safely, participants of the convoy were then treated with a mini ‘fiesta’ in the swanky mall’s The Square. With such a large-scale event at hand, Naza Premira Sdn Bhd also took the opportunity to launch six new additions into its line up including the three special and limited edition 70th Anniversary models – the PX, GTS and Primavera. (Read more about the launch here) 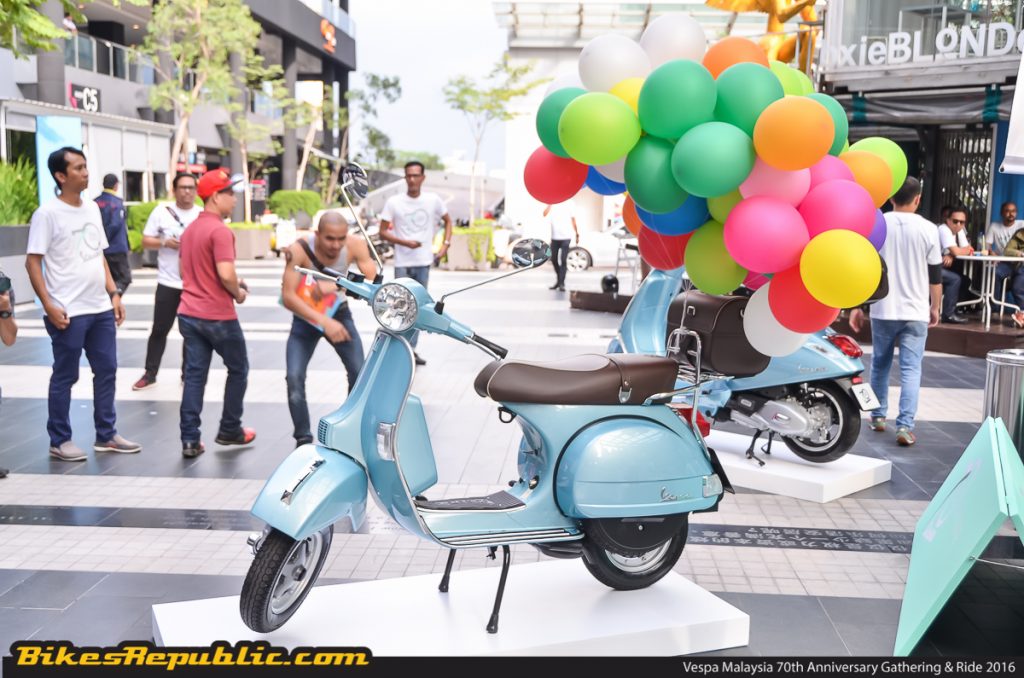 Other exciting activities were held too such as face painting, games, as well as special merchandise and memorabilia sales. On top of that were performances by local artistes such as Maha Jefry, Tasha Aleia and Amy Search. However, many owners were anxiously awaiting the result of the event’s special lucky draw event where one winner went home with the grand prize of a brand new Vespa S125 3v i.e. 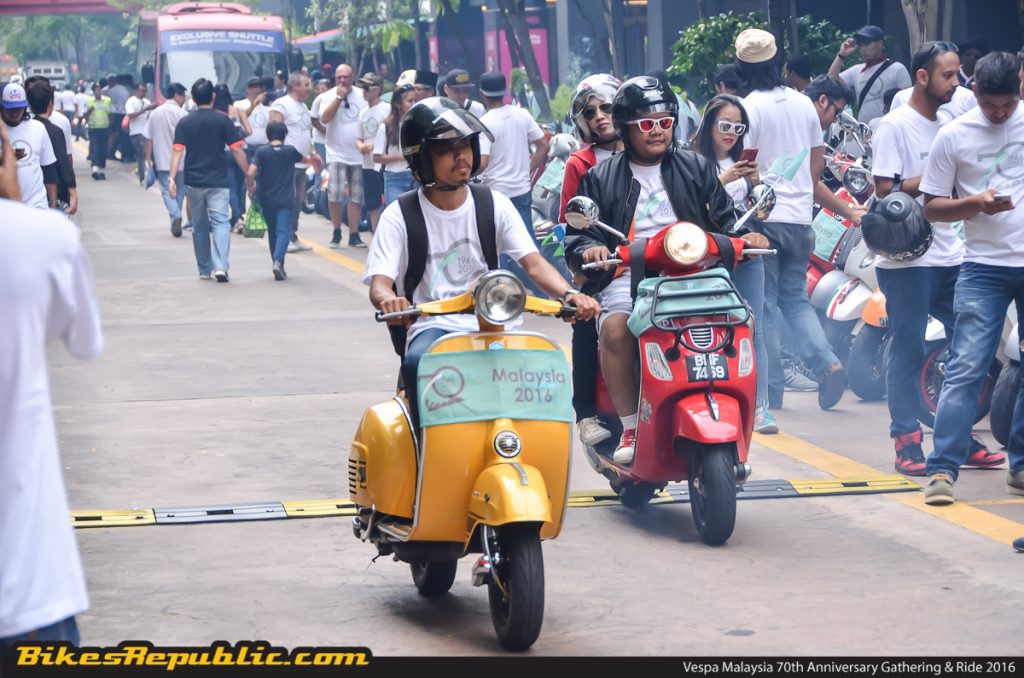 By day’s end, all participating Vespa owners and fans that attended expressed both their delight and content to be apart of this historic and record-breaking fiesta. Organisers Naza Premira even committed itself into hosting this gathering and ride annually from next year onwards. 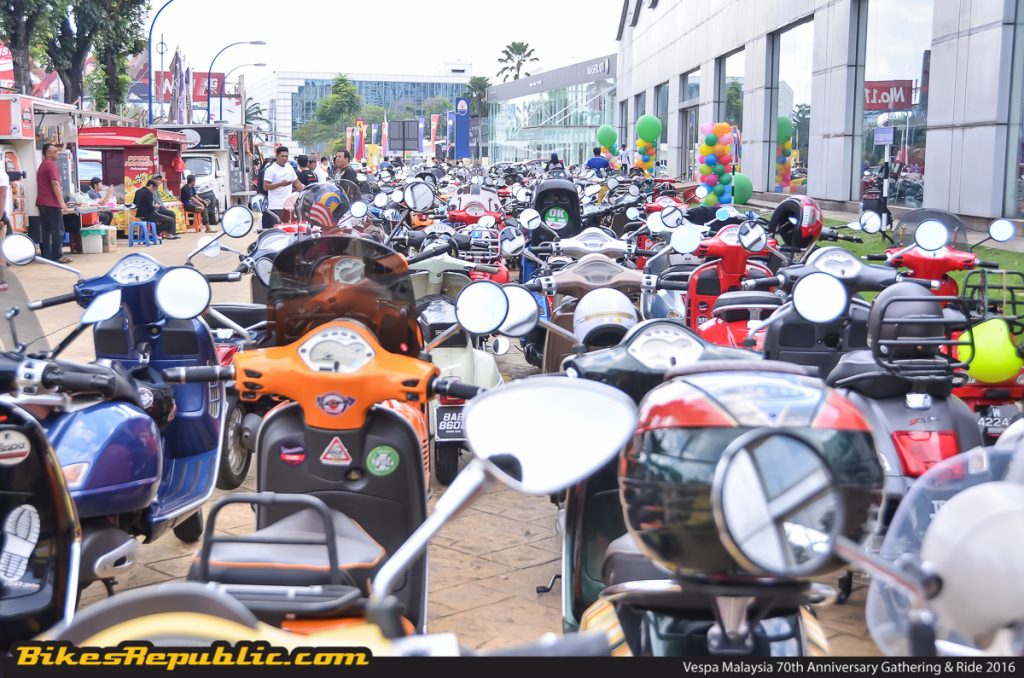 Suffice to say, the iconic and beloved Italian scooter marque that is Vespa got the deserving anniversary celebration it deserved from its Malaysian fans. Judging from the sheer numbers of this year’s ride and the immeasurable passion shown by its fans, we can expect the number of Vespa owners increasing on our roads in the years to come.

Check out more images of last Saturday’s epic convoy ride and gathering in the gallery we’ve prepared below.