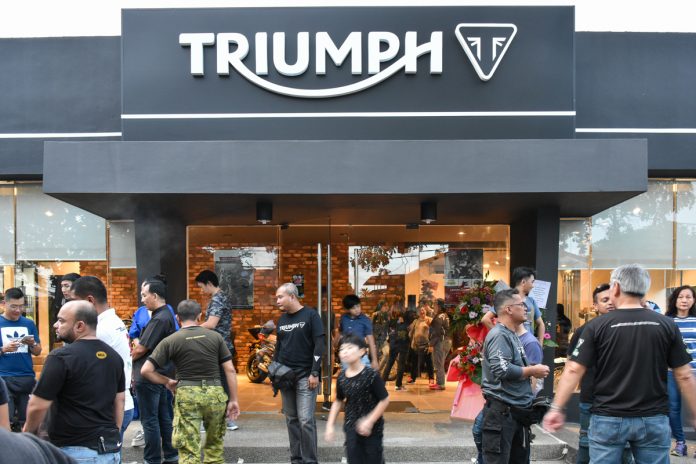 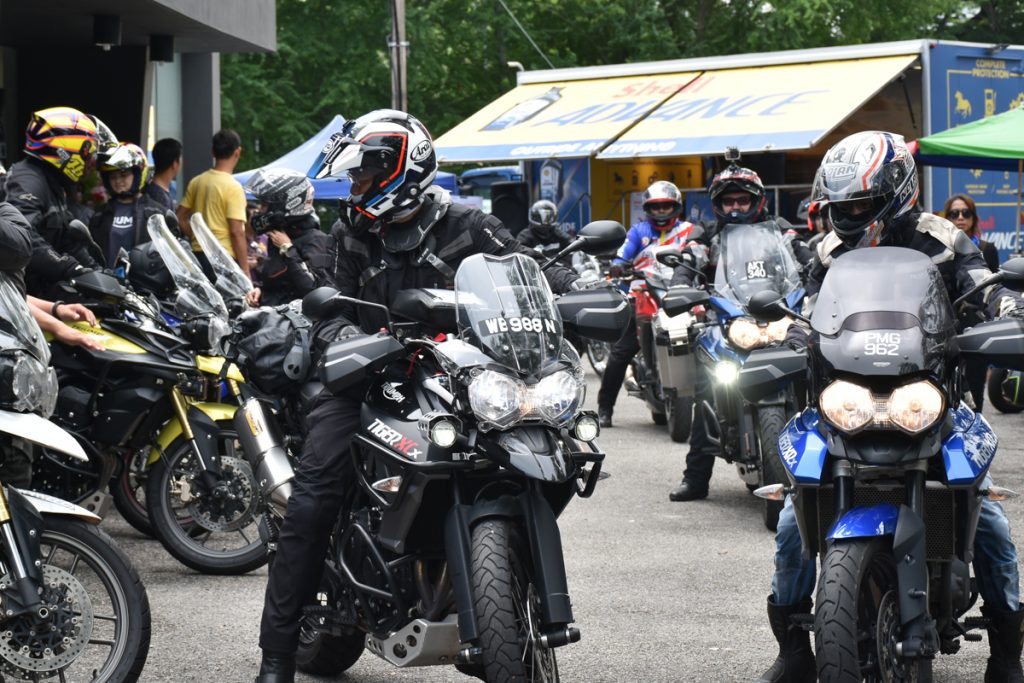 The day saw the arrival of the members of the RATPack (Riders Association of Triumph Motorcycles). The riders came from different locations and have congregated at a single location before arriving in a large convoy. 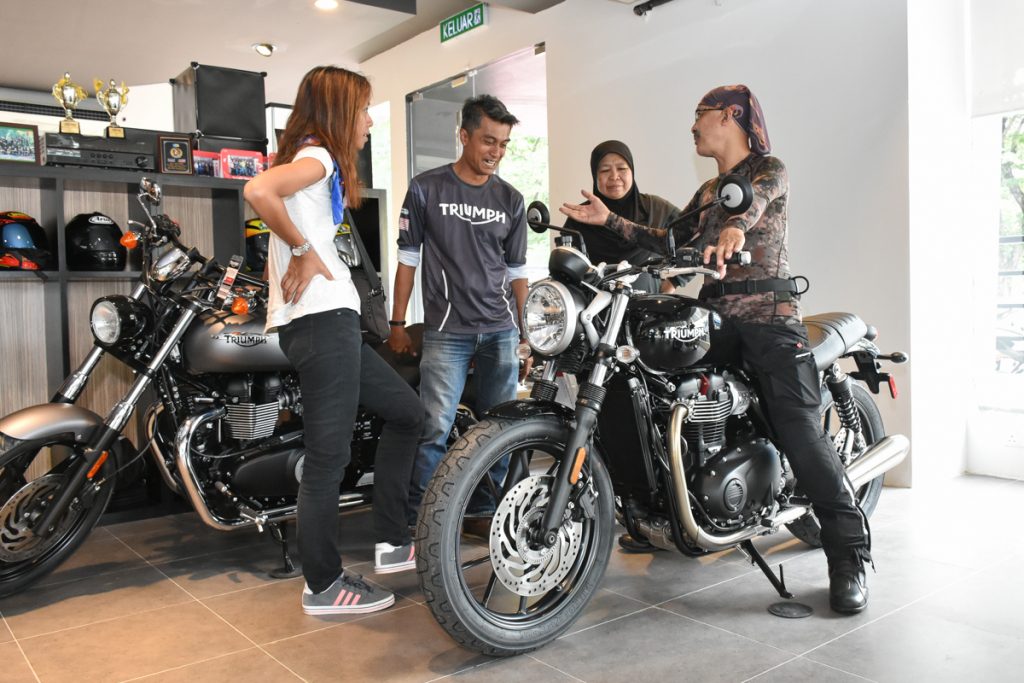 Activities included the Triumph Try-Days motorcycle test ride event, in which the members of the RATPack, riders of other makes, and the general public signed up to take the Triumph of their dreams out for a spin. 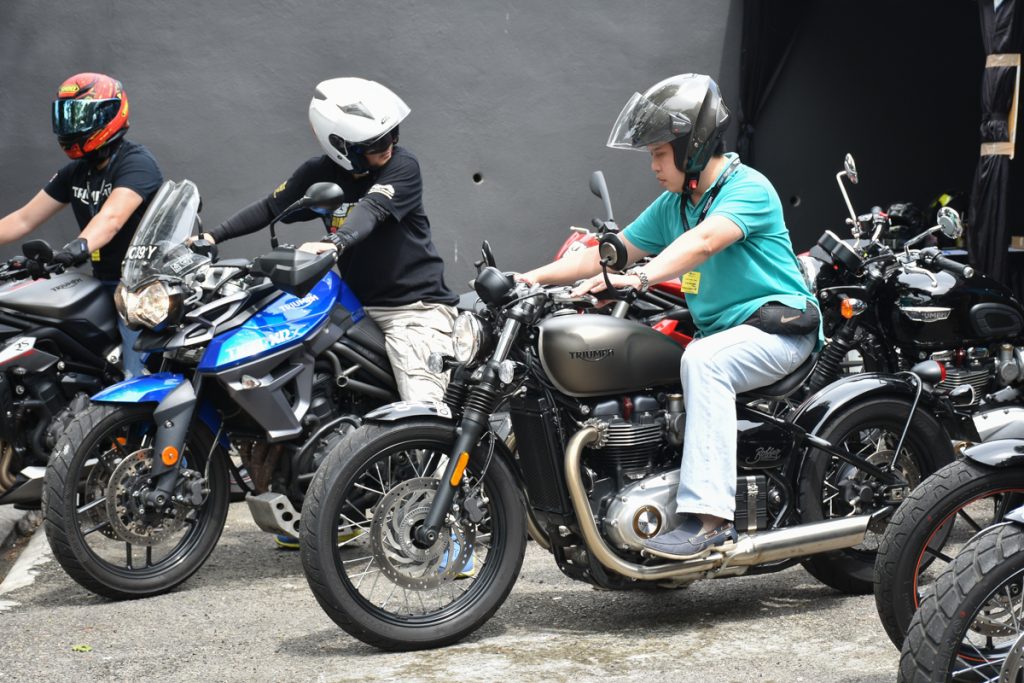 The Shell Advance “Outride Anything” roadshow was also running during the daytime. Lucky visitors stood the chance to win tickets to the 2017 Malaysian MotoGP, besides other great prizes such as Shark helmets, and the opportunity to test their skills on a MotoGP simulator and elbow down standee. 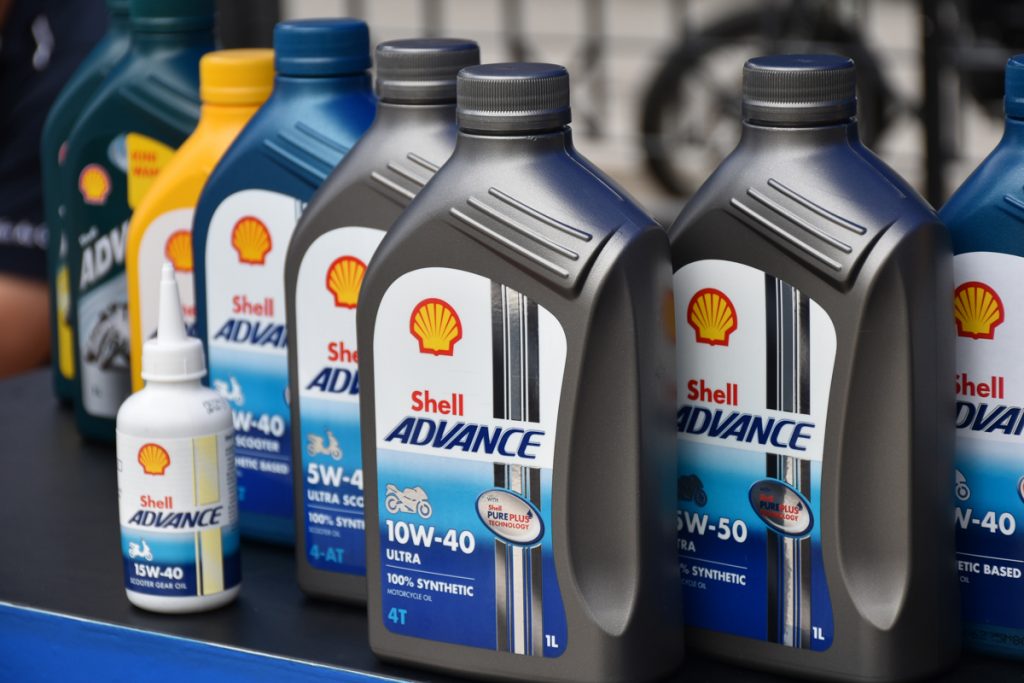 The RATPack members were given the free time to roam as they wished. Many went around the beautiful island of Penang to enjoy the sights and especially the food. Everyone regrouped at hotel afterwards to check in at 3pm. From then on, it was still more Free & Easy time until 7pm when they rode back to the showroom for dinner and entertainment. 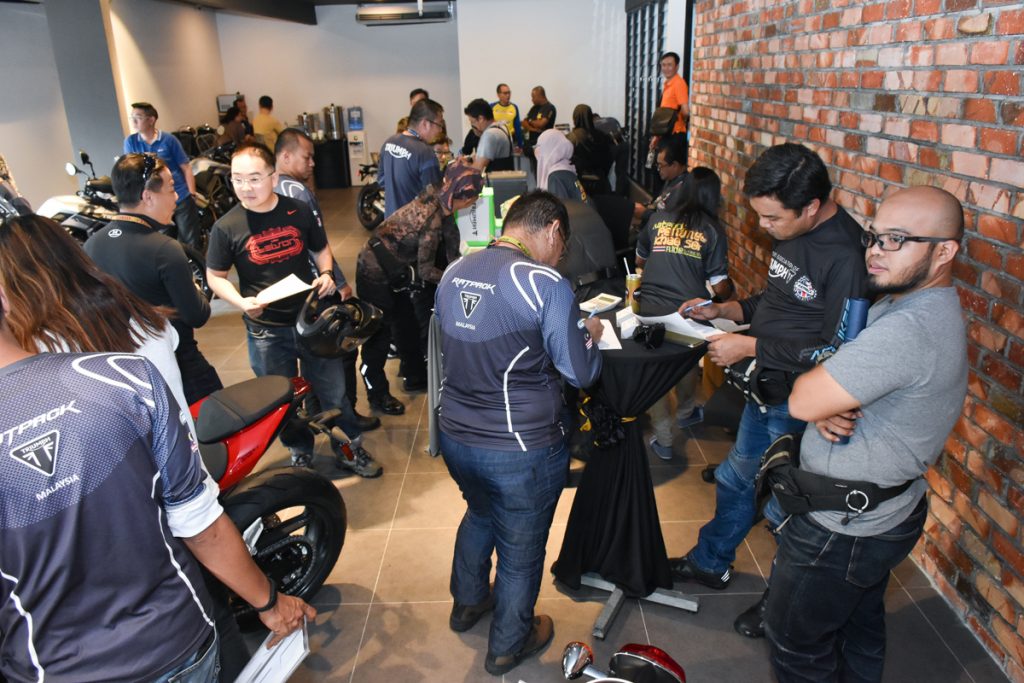 The sight of lambs being roasted and white smoke tinged with the spicy-sweet aroma of satay greeted the riders as they pulled into the compound. Everyone was hungry from their long rides earlier in the day. 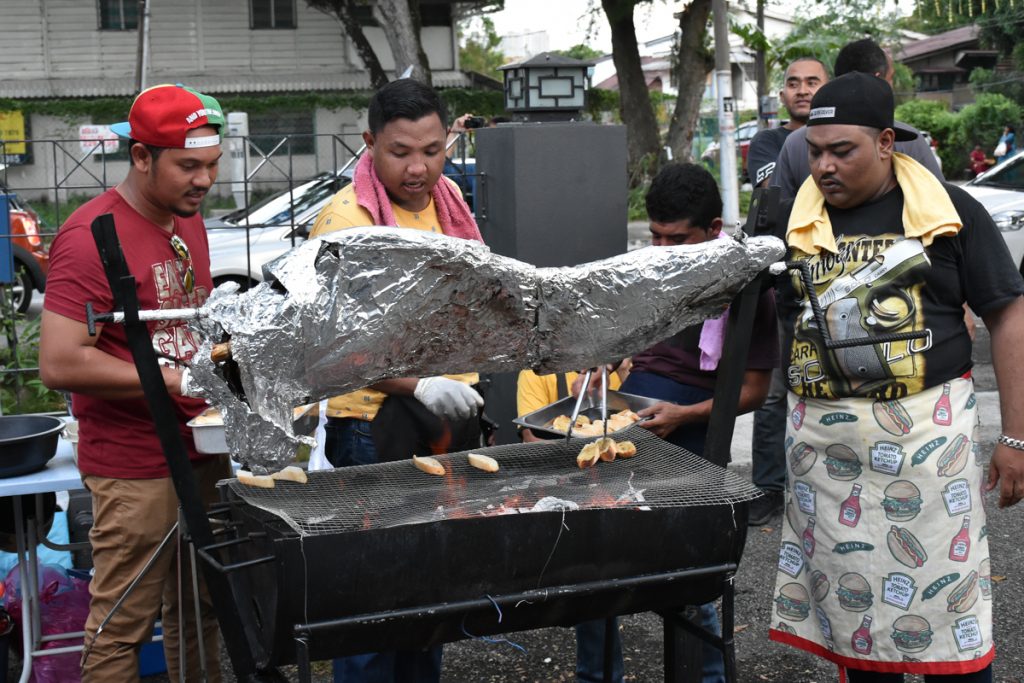 Triumph Motorcycles Malaysia served BBQ lamb, satay, nasi dalca, specialty mi goreng and ais kacang. No one went back hungry, to put it mildly. We overheard funny conversations such as … I need to look for a 7-Eleven to buy Eno; …Oh my poor bike’s suspension; …Cholesterol? Who cares?! 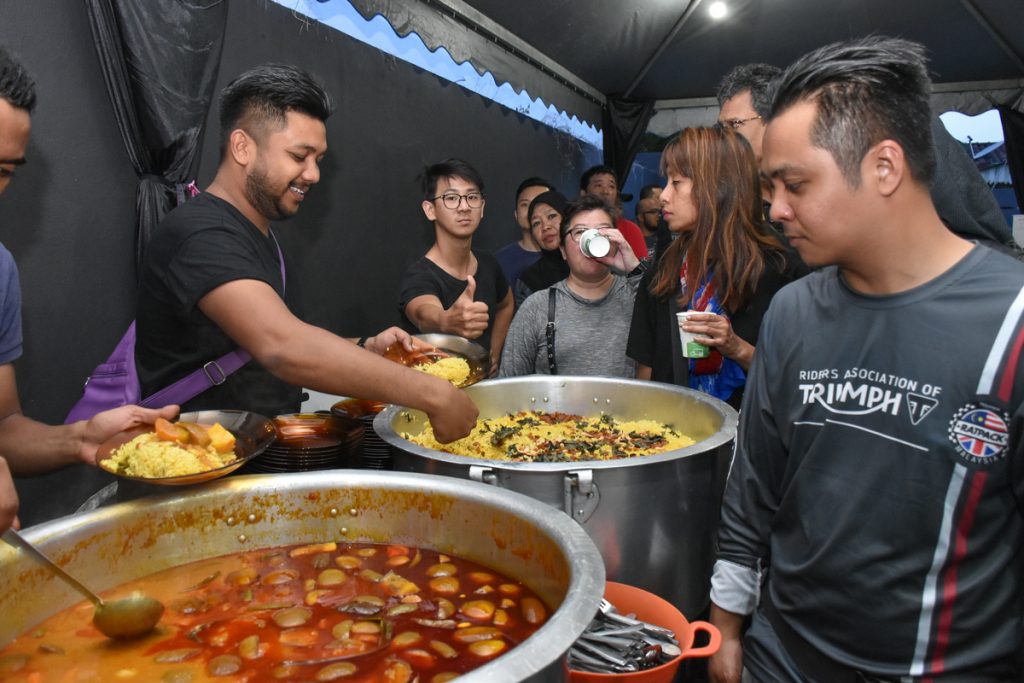 Attendees were entertained by an amazing blues band consisting of a father and his daughter. 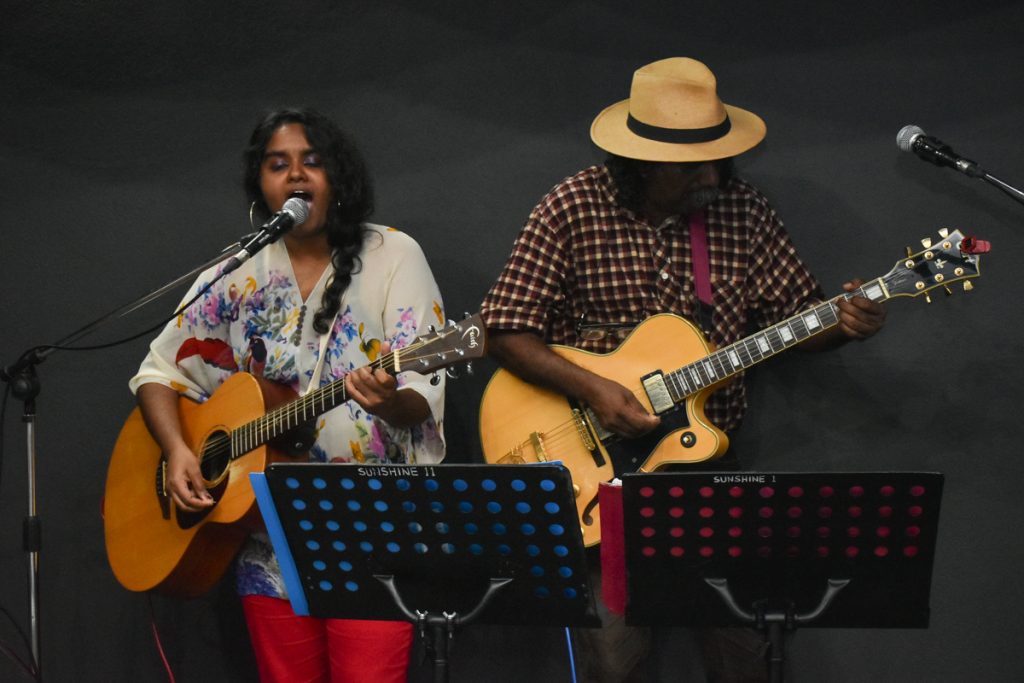 It was wonderful to see people mixing together, having a great time, forming new acquaintances or catching up with long-time-no-see buddies; transcending walks of life, gender, religious and racial background. 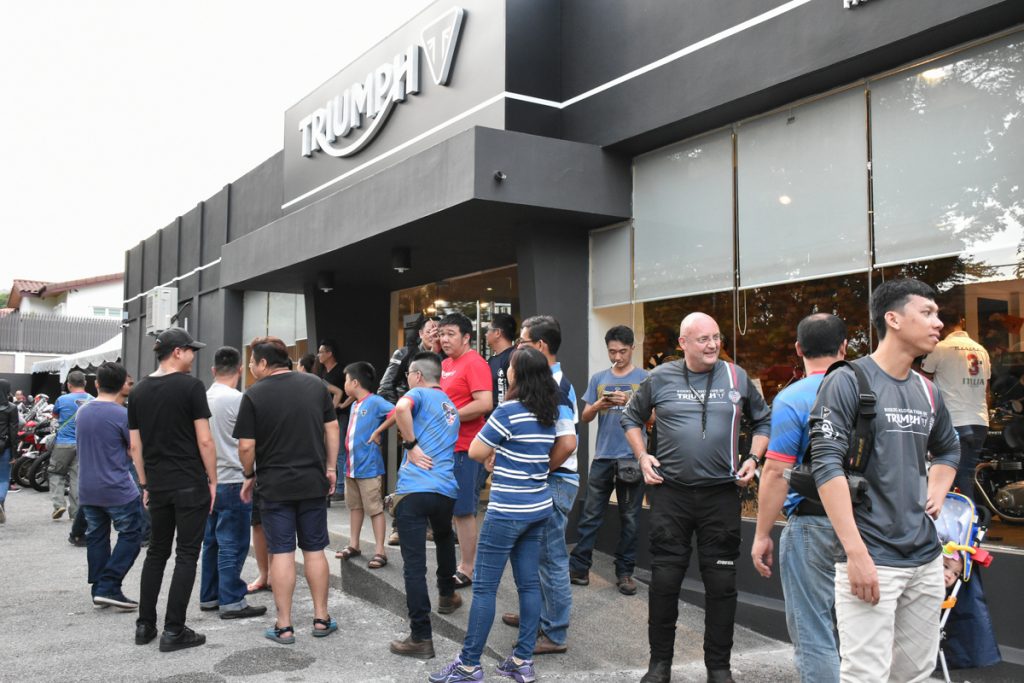 Non-Triumph motorcycle groups and the general public, including big wigs of the Penang motorcycle industry also made their way to the dinner. They were visibly enthralled at not only seeing Triumph motorcycles up close for the first time, but also how the RATPack riders conducted themselves as a friendly, peaceful, self-respecting, yet fun-loving family. 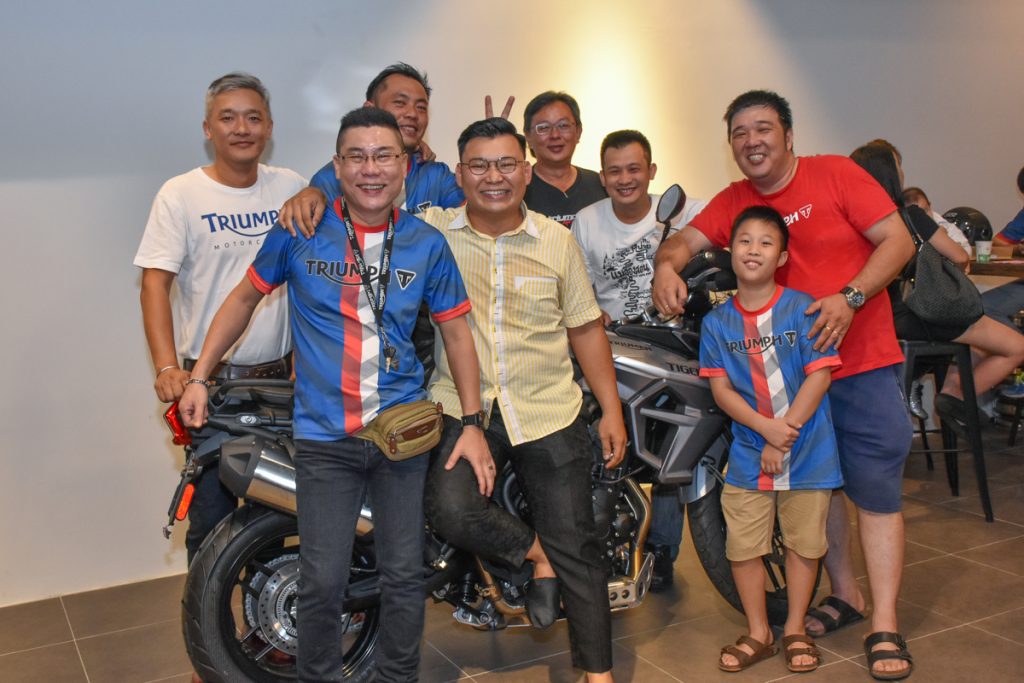 Two sessions of lucky draws were held for the public and RATPack. Some amazing prizes were handed out. To makes things fun, Triumph Malaysia threw in a plot twist to the usual affair. First, three to four names were picked out from a box. Next, they had to answer a few Triumph-related questions. And finally, the winner was decided via an “aural vote” through the cheers of the crowd. 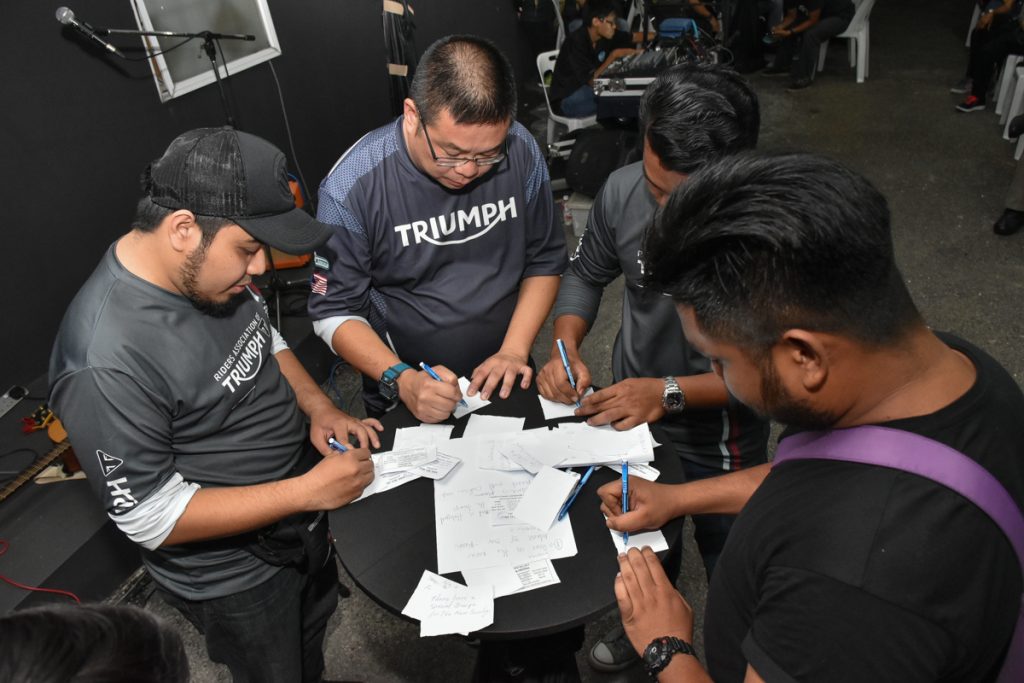 Grand prize for the public category was the unique opportunity to “own” a Triumph of the winner’s picking for a week. As the aural vote was deemed as equal for two final contestants, it went to the tried and true tie-breaker: Paper, rocks and scissors. The winner finally emerged and he wishes for a “sport model.” It turned out that he is currently riding a Kawasaki ZX-9R. 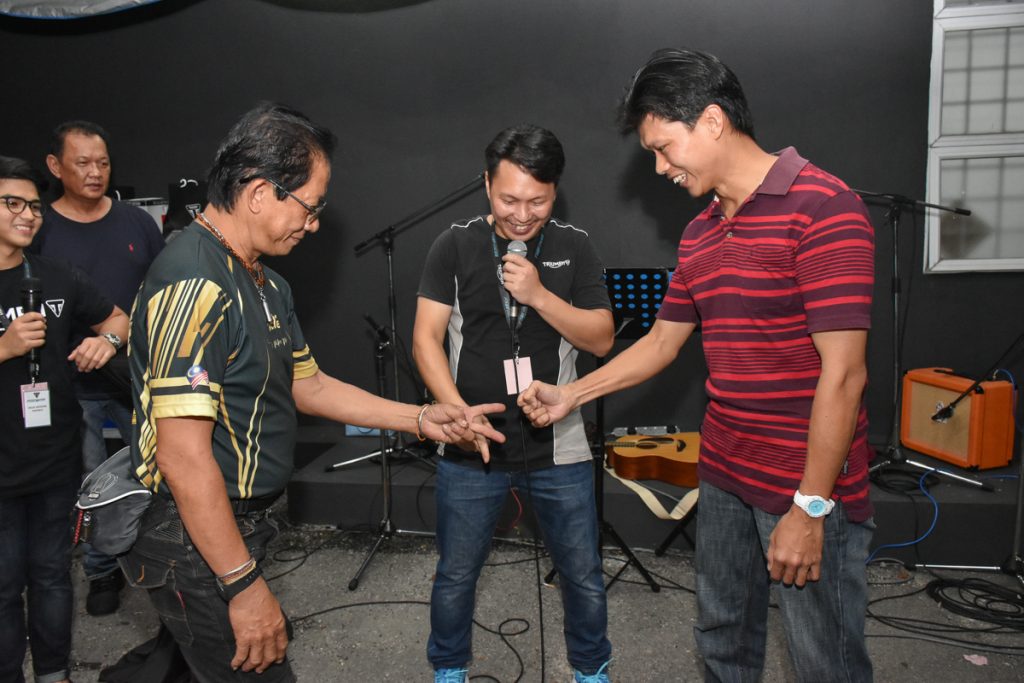 The prizes for the RATPack included major, minor and oil service packages, but the Grand Prize had everyone salivating as it was an Arrow exhaust slip-on canister. 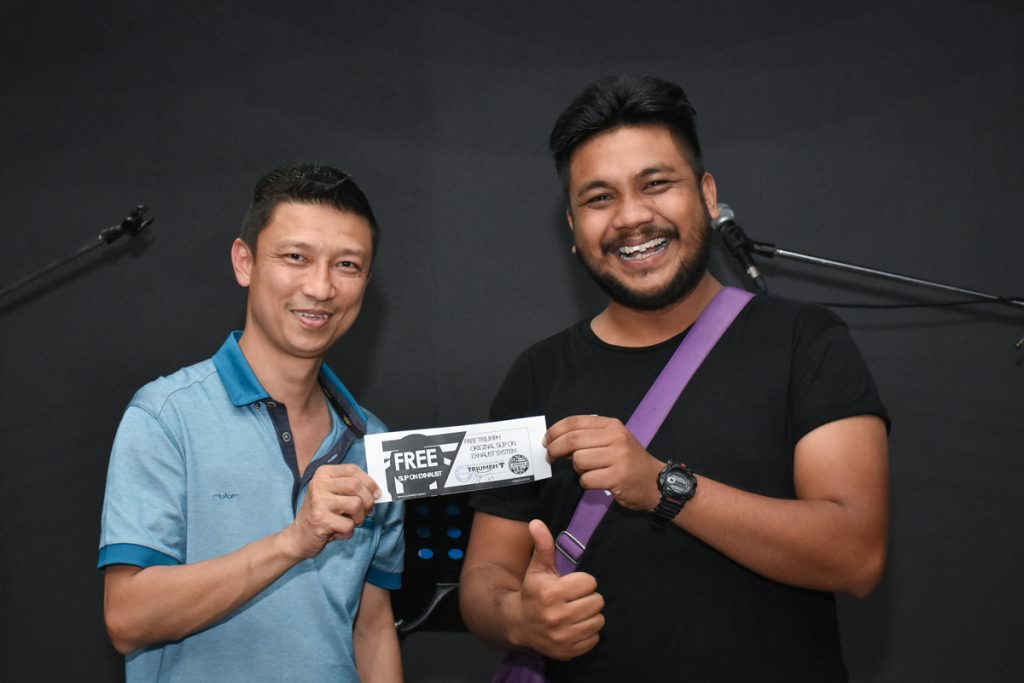 Among the prize givers was Keith Scully, the boisterous and happy-go-lucky representative of the Northern RATPack, and Triumph Motorcycles Malaysia’s Managing Director, Dato’ Razak Malique Al-Hussein. 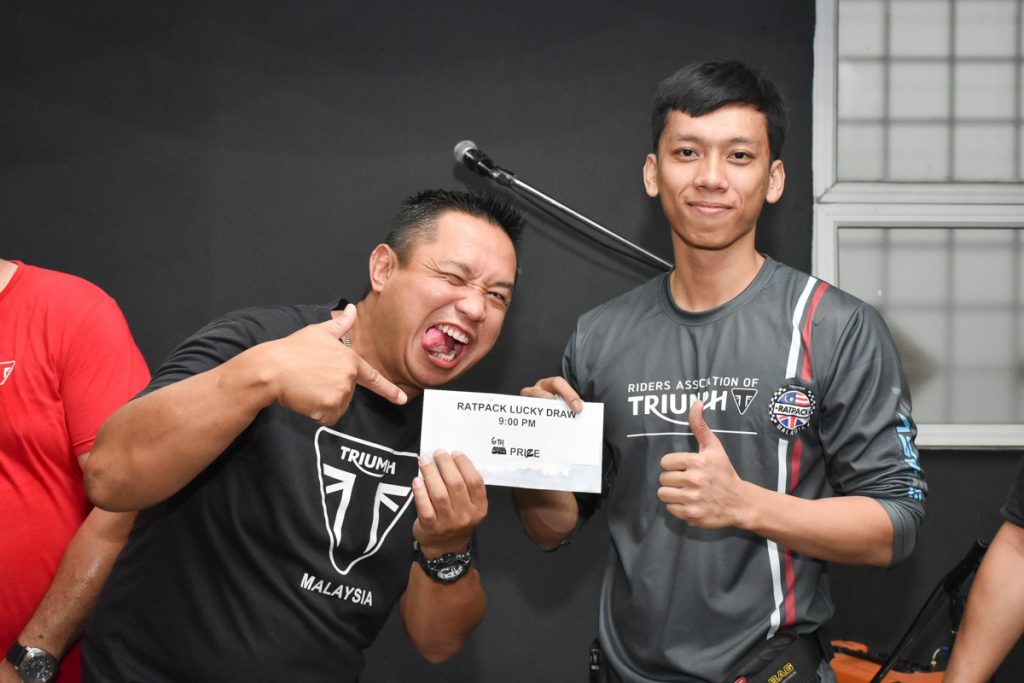 In his speech, Dato’ Malique thanked Triumph Motorcycles Malaysia’s supporters for the tremendous growth. Triumph’s business as a group had been growing year-upon-year, racking up successive record breaking sales figures, including a 100% increase in 2015. Dato’ Malique is confident that they will still grow by a further 10%, in spite of the current soft economy. 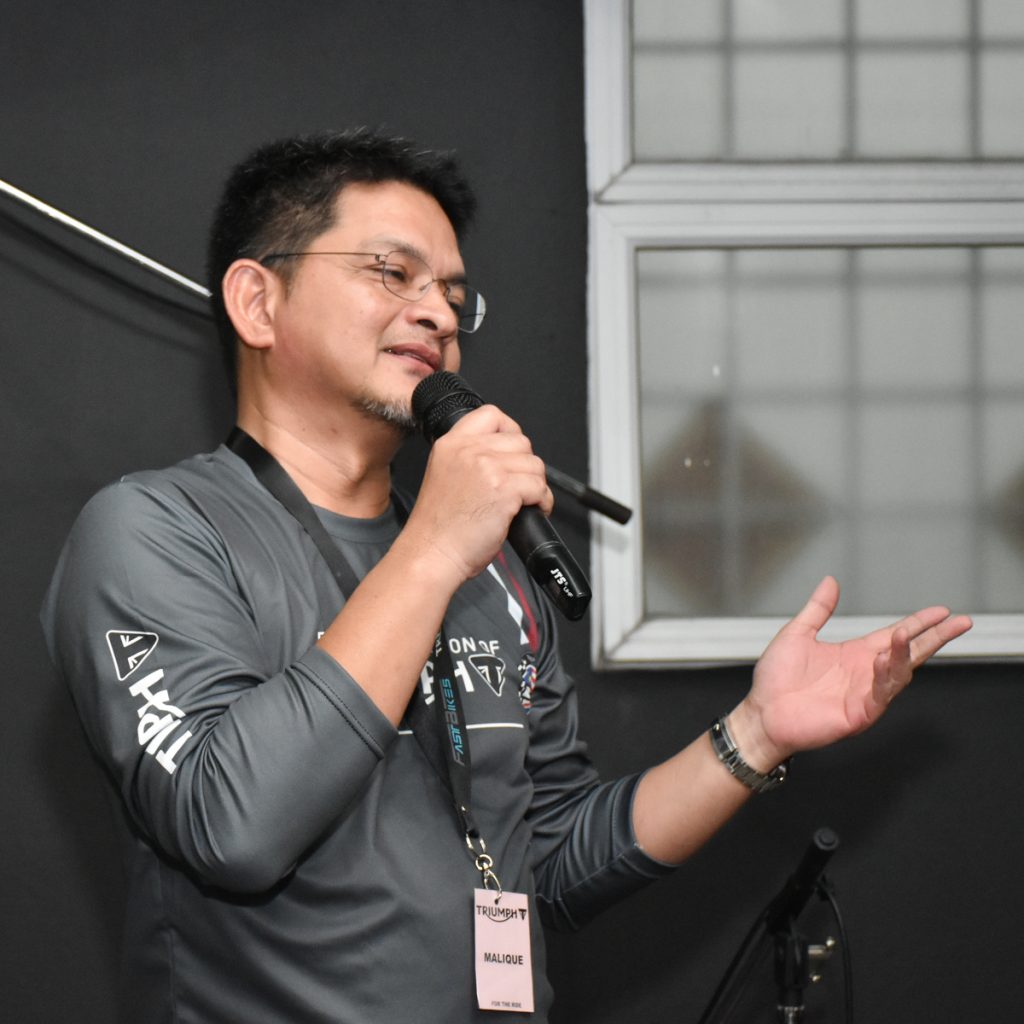 However, exponential growth is of no use if it couldn’t be backed up by a comprehensive and meaningful aftersales support. 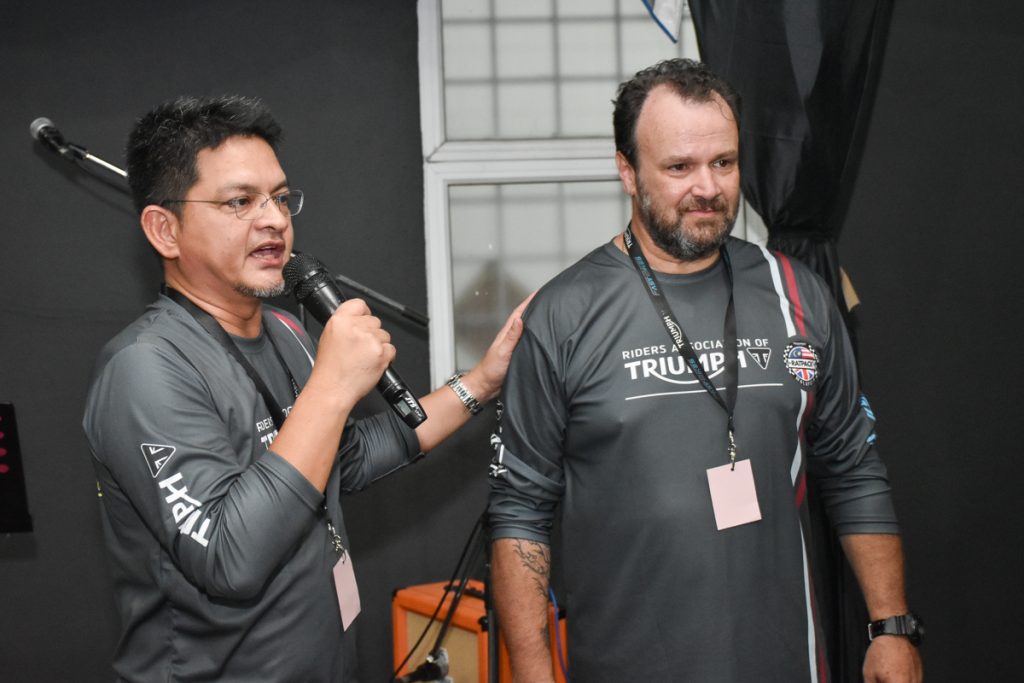 He also mentioned that Triumph Malaysia had been looking to move the Penang showroom to a bigger premise for some time but couldn’t locate a suitable spot or the rest were just too expensive to be of effective use. In the end, it was through Michael Sak, a popular figure among the RATPack who found the premises, because his house was just a kilometre away. 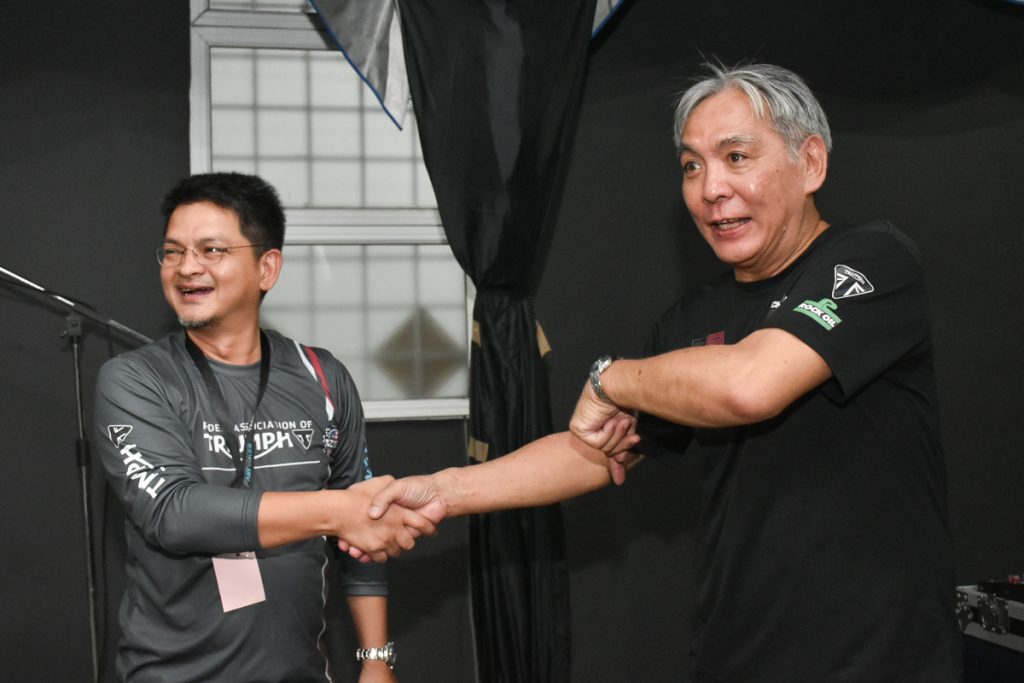 With the new premise up and running, Dato’ Malique assured Triumph’s owners that it was done to provide better facilities to them. The new showroom features a new workshop, spaces for bikers to lepak (chillax) and large compound for parking. 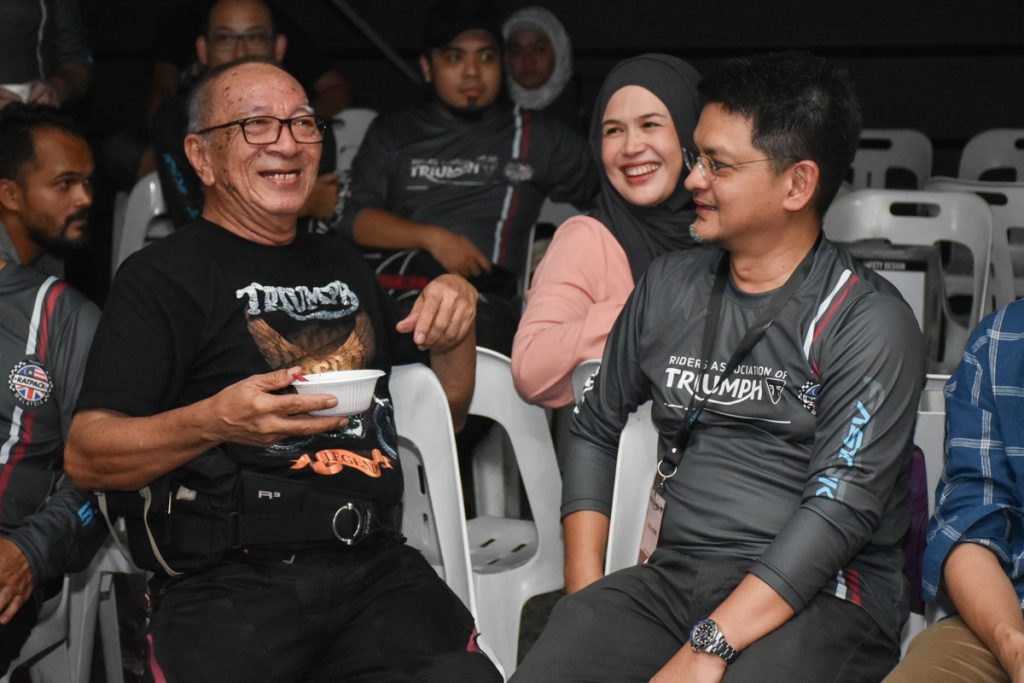 So although the exhaust note of the last motorcycle had faded into the night yesterday, we are confident that this new showroom will continue to reverberate to the roar of the English Twins and Triples for many generations to come.