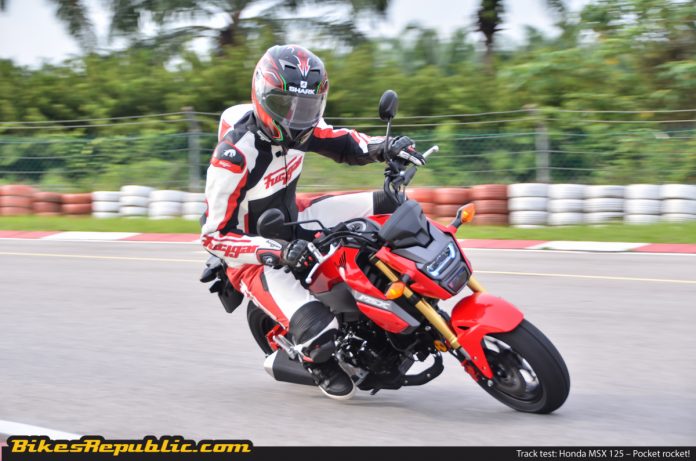 We thrash the Honda MSX 125 around a go-kart circuit and loved it!

We’re in the middle of a mini-moto revolution locally, and at the forefront of this is the newly launched Honda MSX 125. Also known as the Honda Grom globally, this cult favourite just made its debut on our soil last week, much to the delight of its local fans. 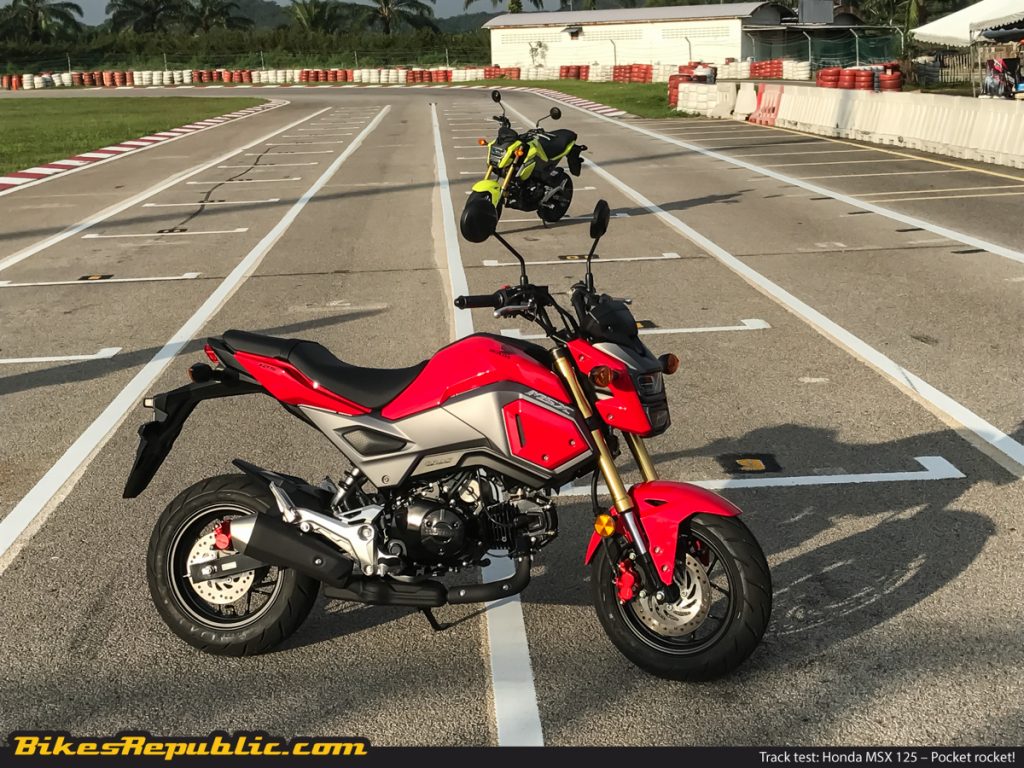 But the cheers quickly turned to groans the moment Boon Siew Honda Sdn Bhd announced the princely asking price it has set for this mighty mini-moto. We’ll agree that the RM11,128.94 (basic with GST) price tag is a a huge one to meet, even for the biggest of fans. 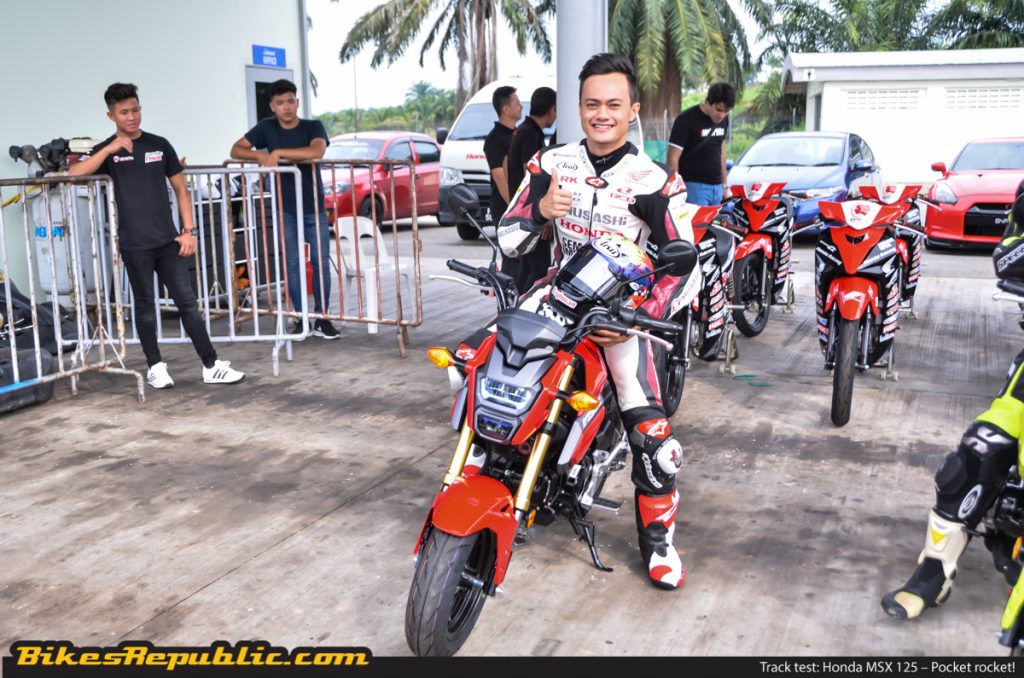 But the Penang-based Honda bikes institution is confident that the all-out fun the Honda MSX 125 promises to deliver will offset those woes. To prove just that, the firm even organised a special track test session for local journos at the Sepang Go Kart Circuit led by newly crowned ARRC SuperSport 600 champion Zaqhwan Zaidi. 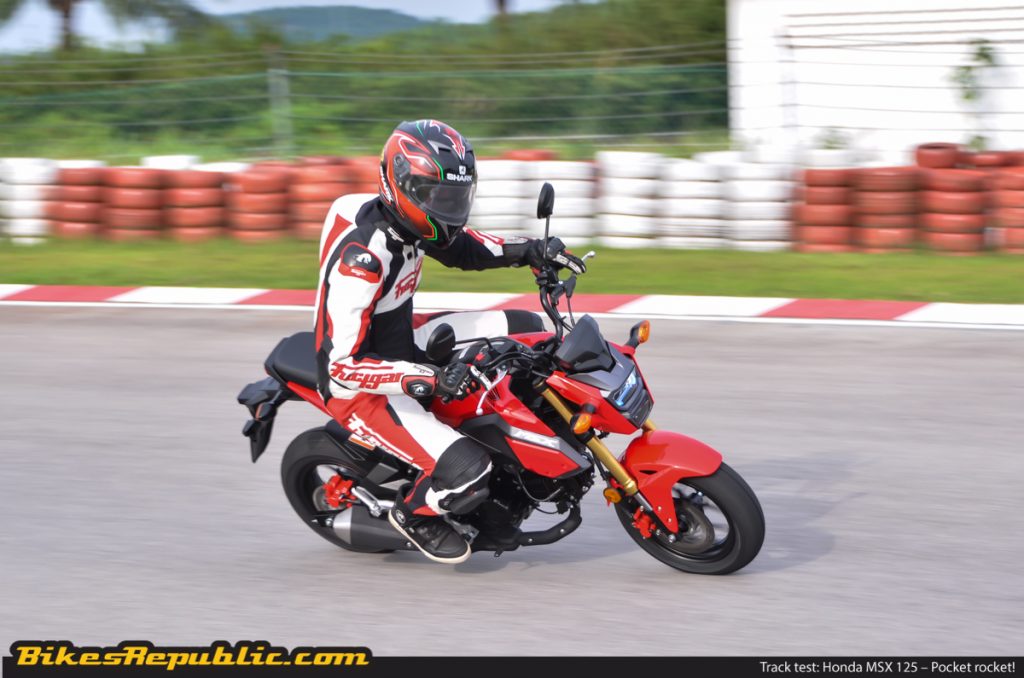 Well, we suited up and set ourselves with the mission to determine what this mighty mini-moto had in store for those willing to meet its price. What ensued was perhaps the most fun anyone can have on bike this small, and perhaps solidifying the reputation it has built overseas as a fan-favourite.

Peel away the stylish skin and fancy full-LED headlight, the MSX 125 is just like any other Honda bike. It has a traditional backbone chassis architecture, a perky yet efficient air-cooled 125cc single-cylinder heart primed with electronic fuel injection, and other amenities that’ll just about impress any regular commuter rider. 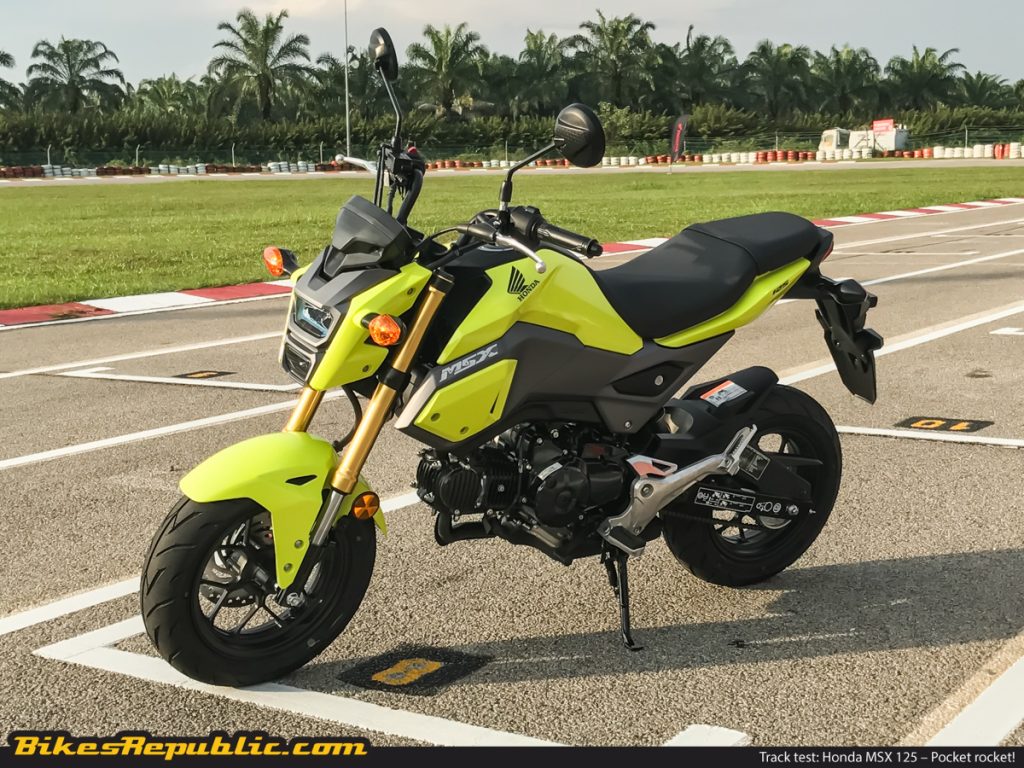 But the MSX 125’s similarities with a regular Honda commuter cub ends once you get this pint-sized fighter going and around corners fast. Don’t let its size fool you, the Honda MSX 125 is truly larger than life as it fulfils its intended purpose, and that is bringing the fun of riding to all. 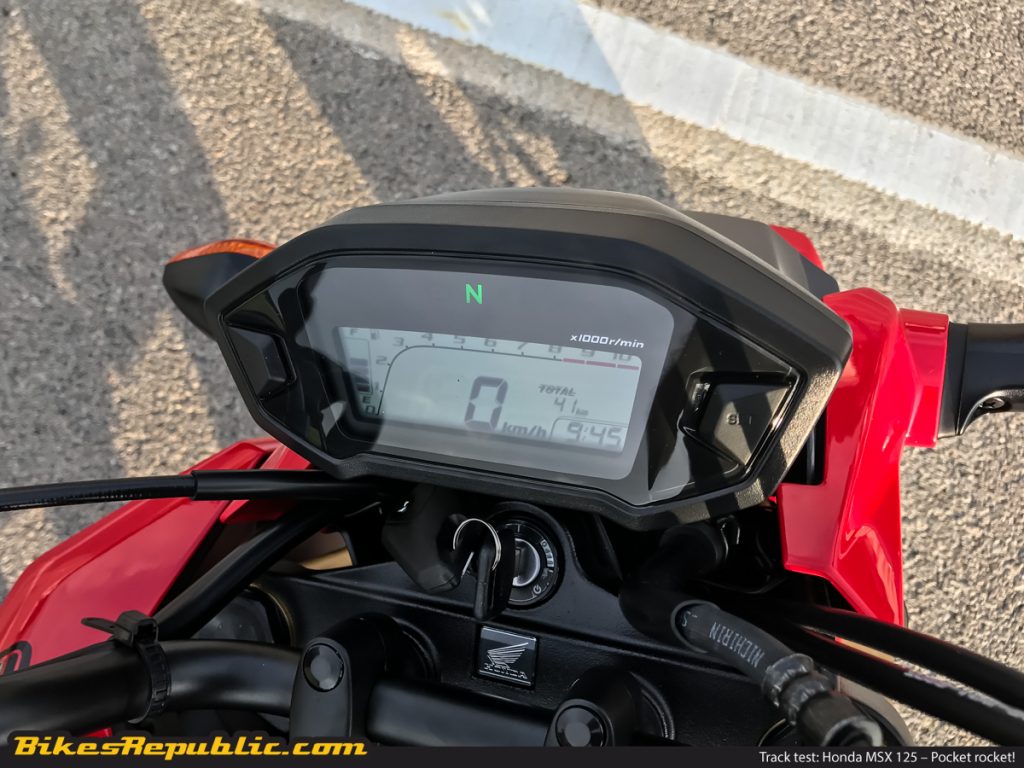 Unless you’re a six-foot-plus tall point guard for the KL Dragons, getting to grips with this small bike’s ergonomics is a cinch. The seat is both low in height and decently cushioned, welcoming just about anybody to hop on and go – yes, ladies included here too. 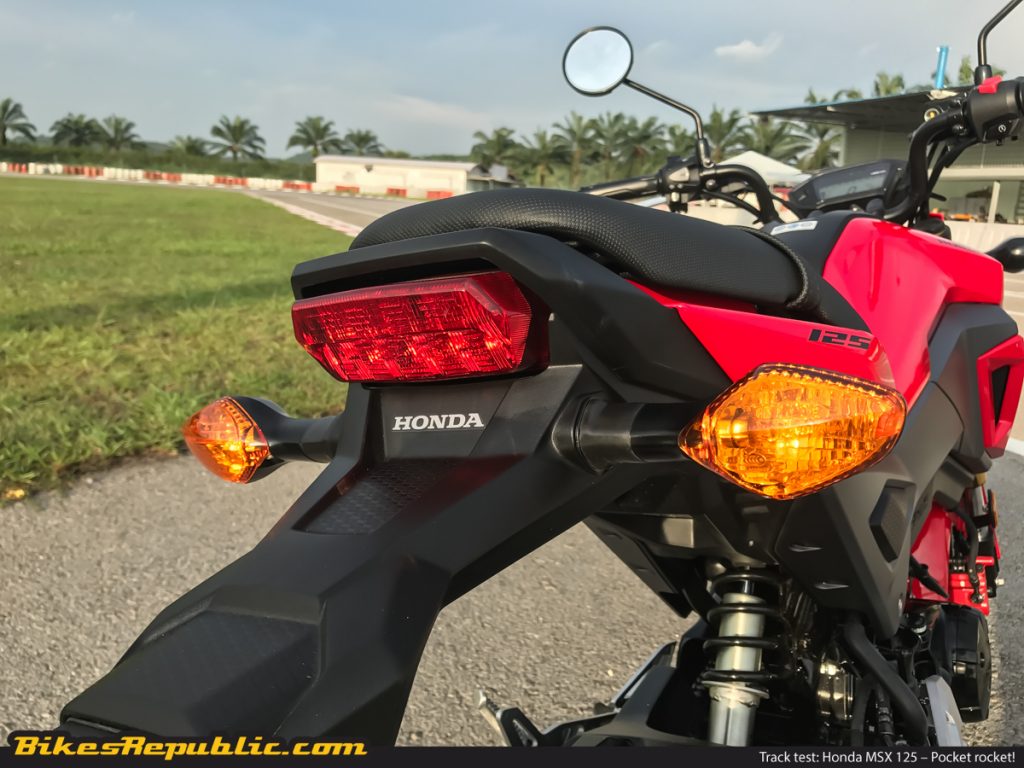 Since it is homologated for road use, you really could use this on the road if you so wished. In reality though, the Honda MSX 125 feels much more at home tearing up the asphalt of your local go-kart circuit, or perhaps leaving burnout marks on the concrete grounds of your neighbourhood skatepark really. 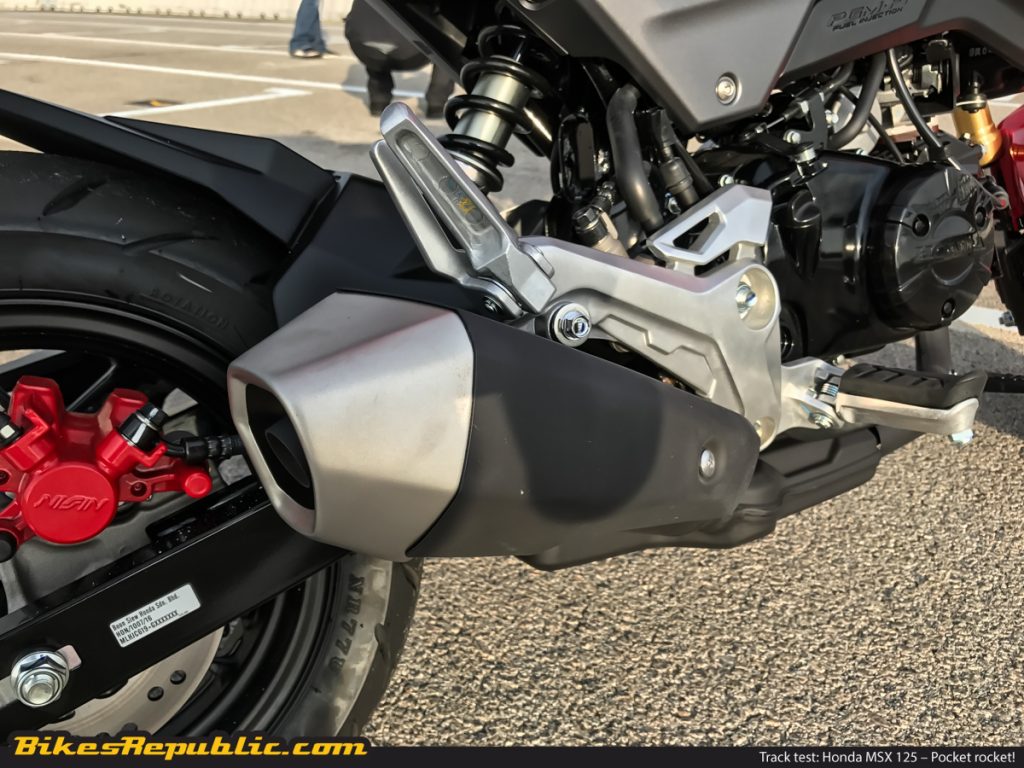 The only thing that will bother most is the rather silent soundtrack of the stock exhaust. However, this isn’t such a huge issue as we know most buyers would opt to swap for any of the many aftermarket systems widely available in the market now.

This lack of soundtrack also fast becomes the least of your worries once you get going and bask at this mini-moto’s impressive agility and handling, especially around bends. The technical Sepang Go-Kart Circuit was perhaps the perfect proving ground for us to test this out really. 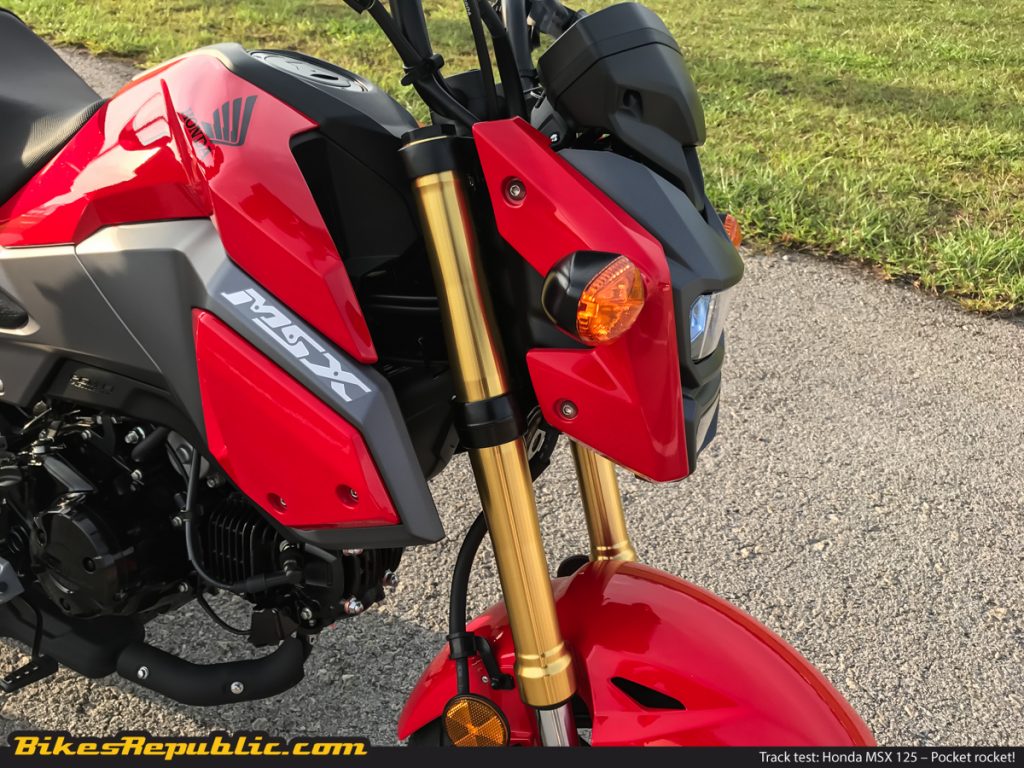 Much of the MSX 125’s manoeuvrability comes from the bike’s ultra-light kerb weight figure of just 104kg, not forgetting the suzzies and brakes too. The setup of the telescopic upsidedown front forks and matching rear monoshock plus swingarm inspires lots of confidence to go even faster really.

The same praises go for the single hydraulic disc brakes front and aft. Despite their rather tiny sizes, they do well at halting the MSX 125 and its rider with little fade. The absence of ABS is of little concerns too – you don’t really need one on a bike this small and it also serves as a perfect training tool for track novices. 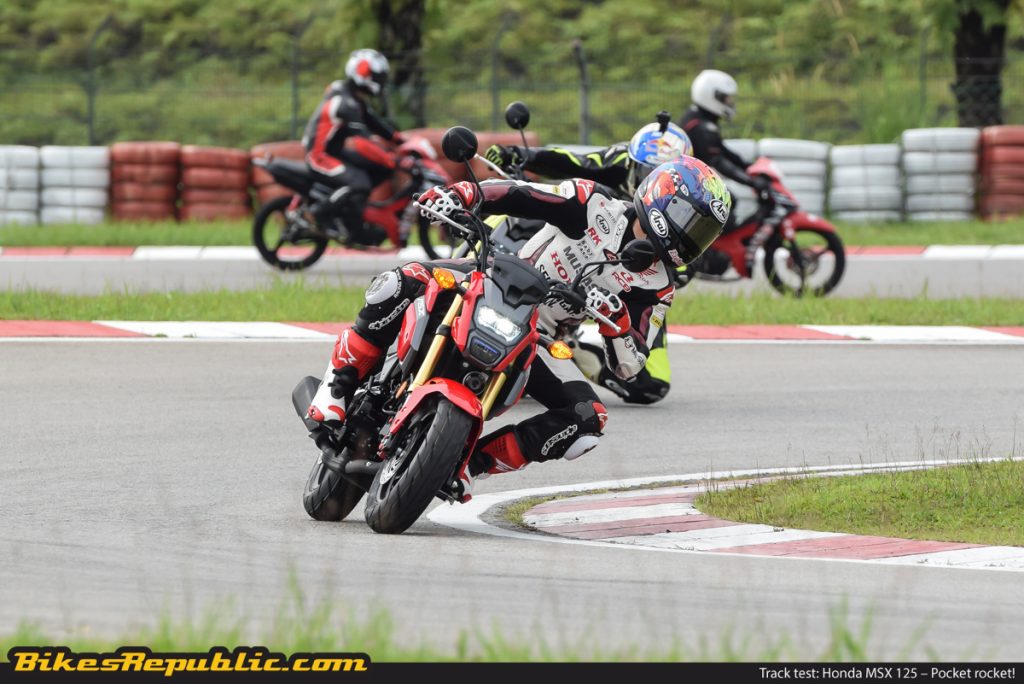 Going round corners fast with the MSX 125 is a thrilling event in its own right. The sight of a title-winning race rider like Zaqhwan easily getting his knees down from corner to corner during our session was something this writer couldn’t replicate, but it was indeed fun to try and match. 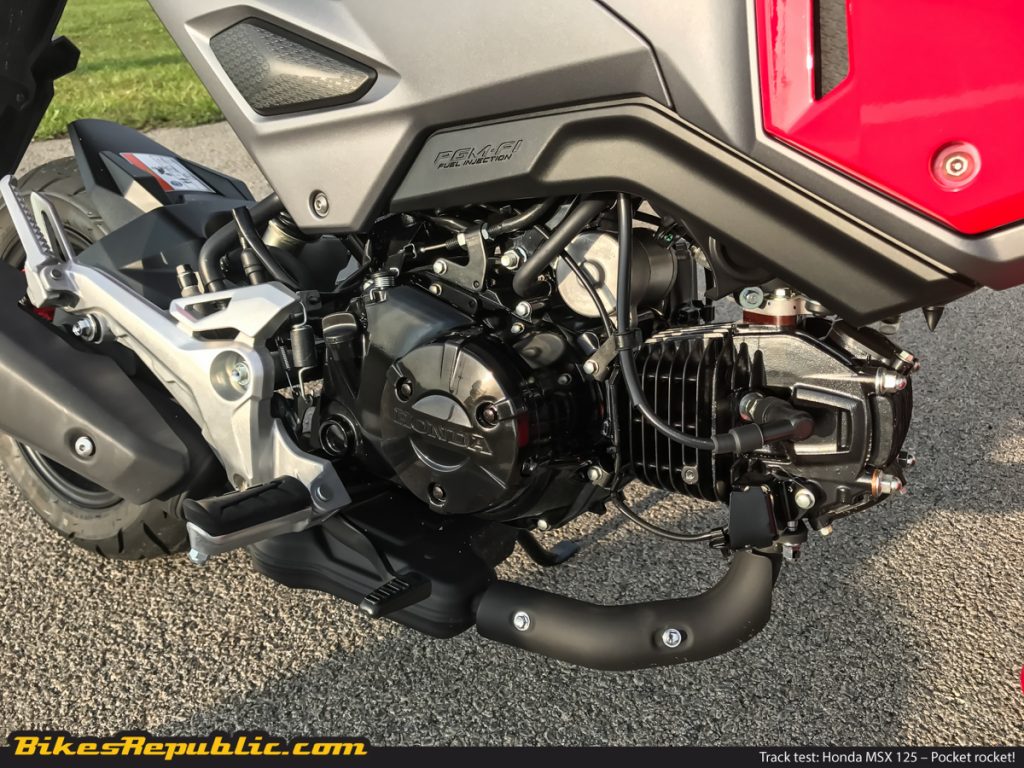 And before you dismiss the seemingly small output figures from its powertrain, just remember that size really isn’t everything with the Honda MSX 125. Trust us when we say that the 9.7hp and 11Nm of torque thumping out of that 125cc single is enough to give you all the thrills you need for those occasional weekend jaunts around a go-kart track. 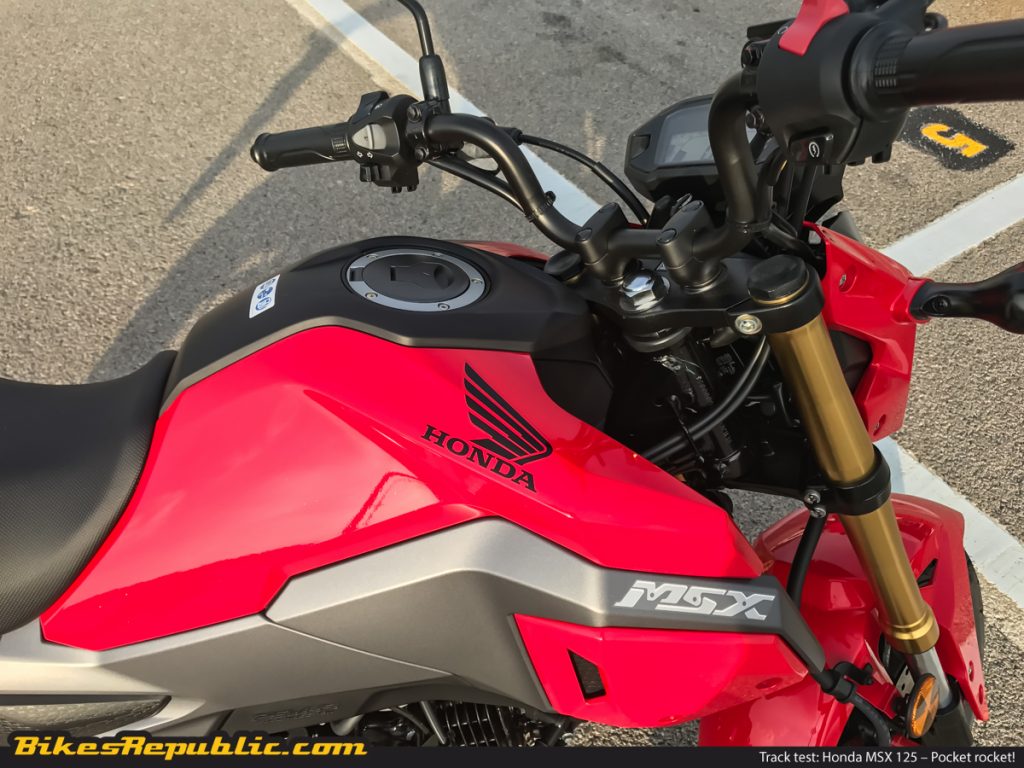 Best of all? You don’t need to be a seasoned MiniGP track warrior to enjoy the MSX 125. So as long as there’s fuel in its 5.7-litre fuel tank, and you get to grips with the four-speed manual transmission, it will deliver bucket-loads of pure riding fun to all astride it, regardless of experience, skill level or place. 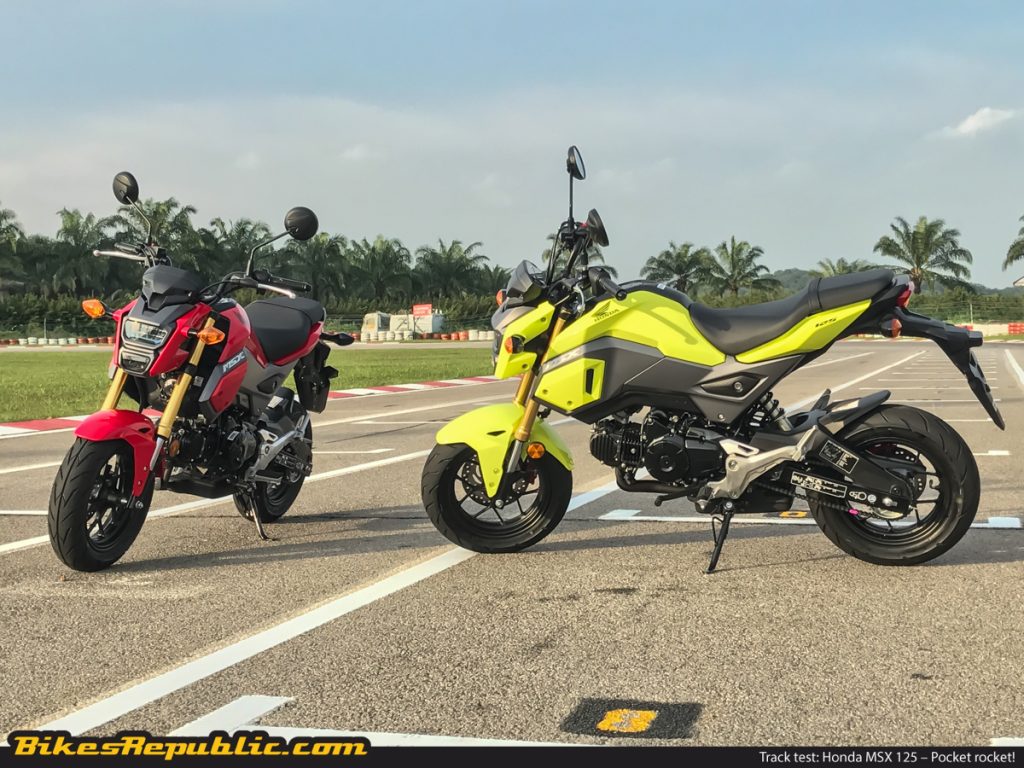 And to have such thrills at just RM11,128.94 is really a steal, especially for the avid weekend warrior. And just before you consider the rivalling Kawasaki Z125 Pro or the recently launched and cheaper-priced Benelli TnT 135, both don’t have the cool cult-like status that the Honda holds, and that’s really hard to beat.