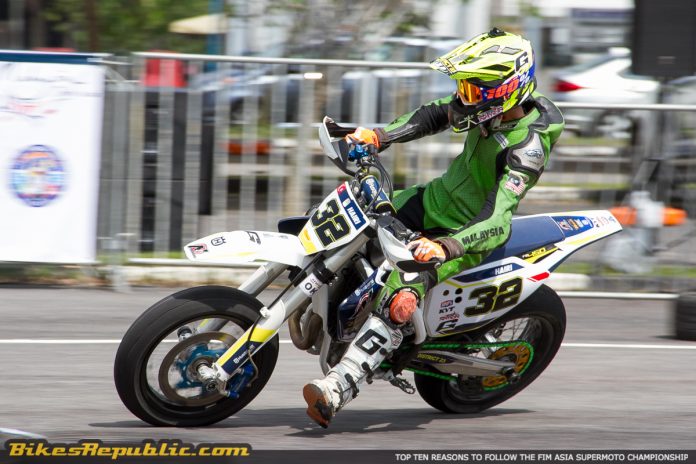 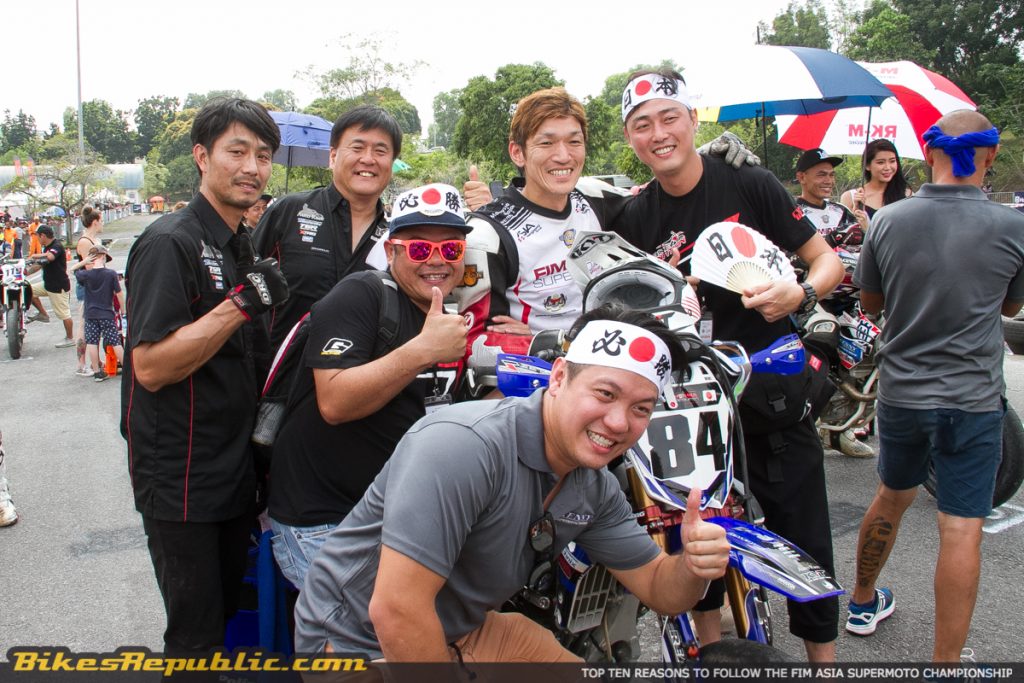 The 2017 season of the FIM Asia Supermoto Championship kicks off on 2nd September 2017 at the Thailand Circuit Motorsports Complex, Nakhon Chai Si, near Bangkok, Thailand.

Promoted by the Asia Supersports Group (ASG), E-Plus Global and Bikenation, the championship has come a long way from its humble beginnings, consisting of a series of races cobbled together, to what is now a series which has attracted participation and attention the world over.

But why is supermoto popular? Here are the Top 10 reasons: 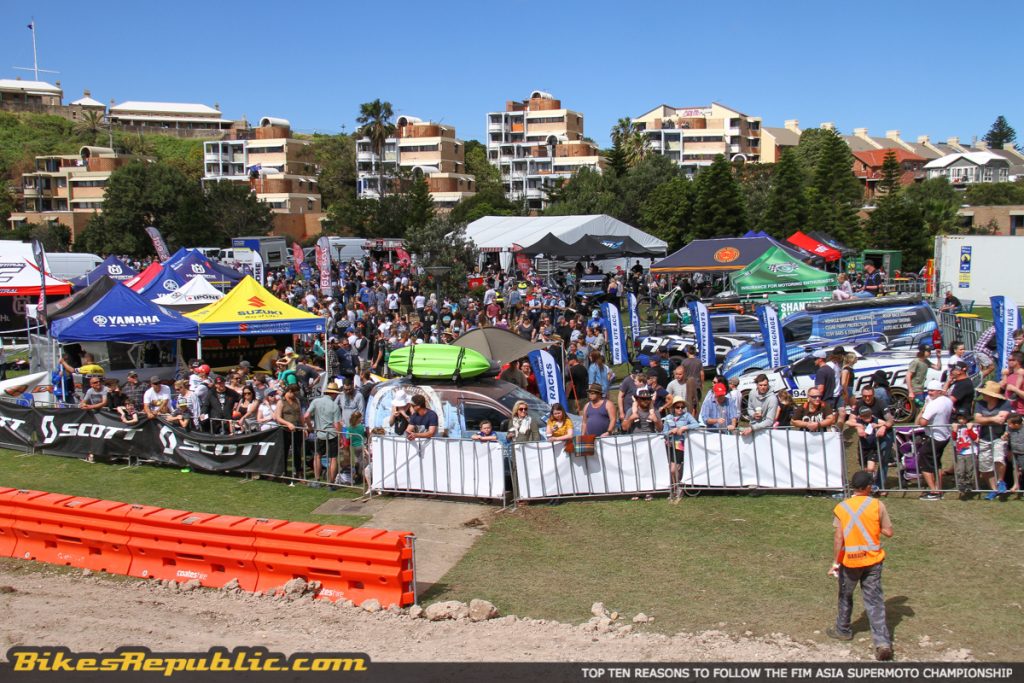 Yes, it’s true that there’s a carnival-like atmosphere at any race, but you could find all sorts of stuff from the very affordable to the most expensive stuff at supermoto races. There’s also the authentic street food at each of the countries supermoto visits, compared to having to spend RM15 for a diarrhea-inducing burger at the track. 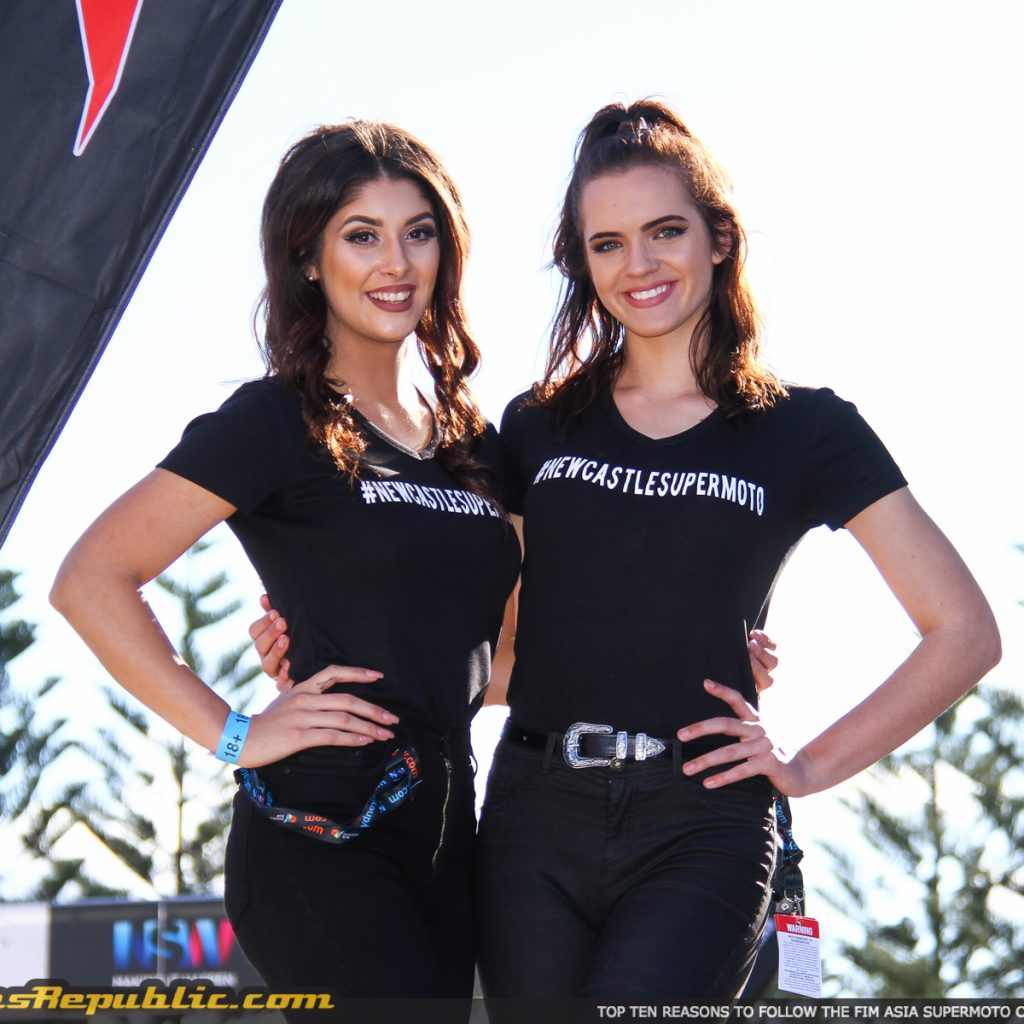 The pits and paddock areas are not enclosed in concrete booths. You could see the bikes up close and how the teams work on them. Call out to the riders and they are more than happy to go over for selfies and autograph your gear. Same with some of the umbrella girls. 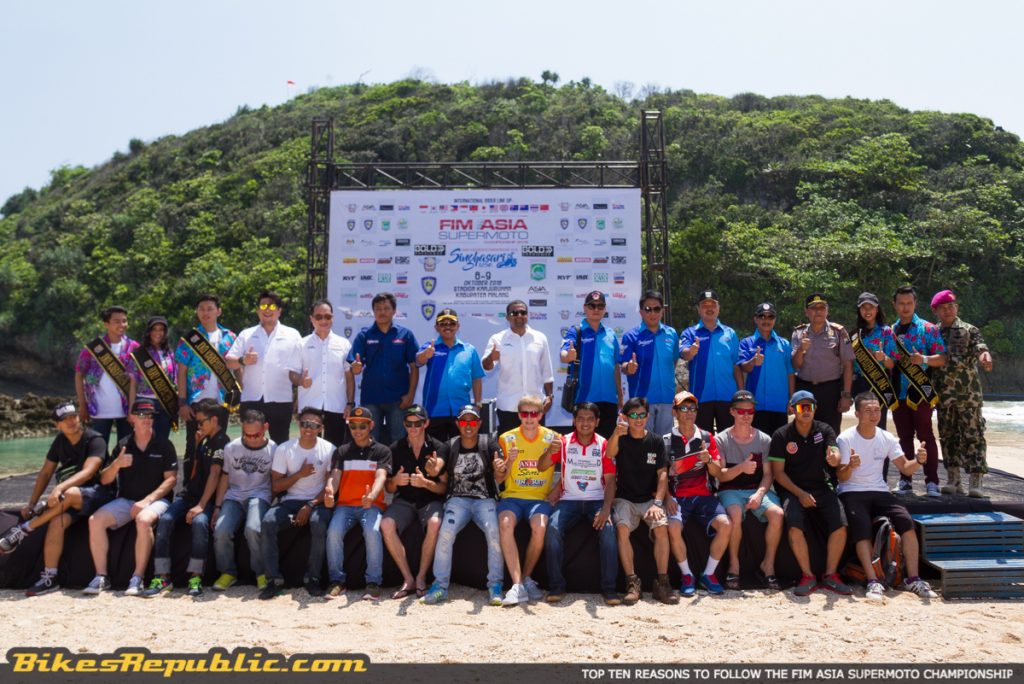 The championship may be titled “FIM Asia Supermoto,” but the field consists of riders from as far away as Australia, India, Sri Lanka, Russia, France, United Kingdom and the United States in addition to those from Asia. It’s truly an international championship. 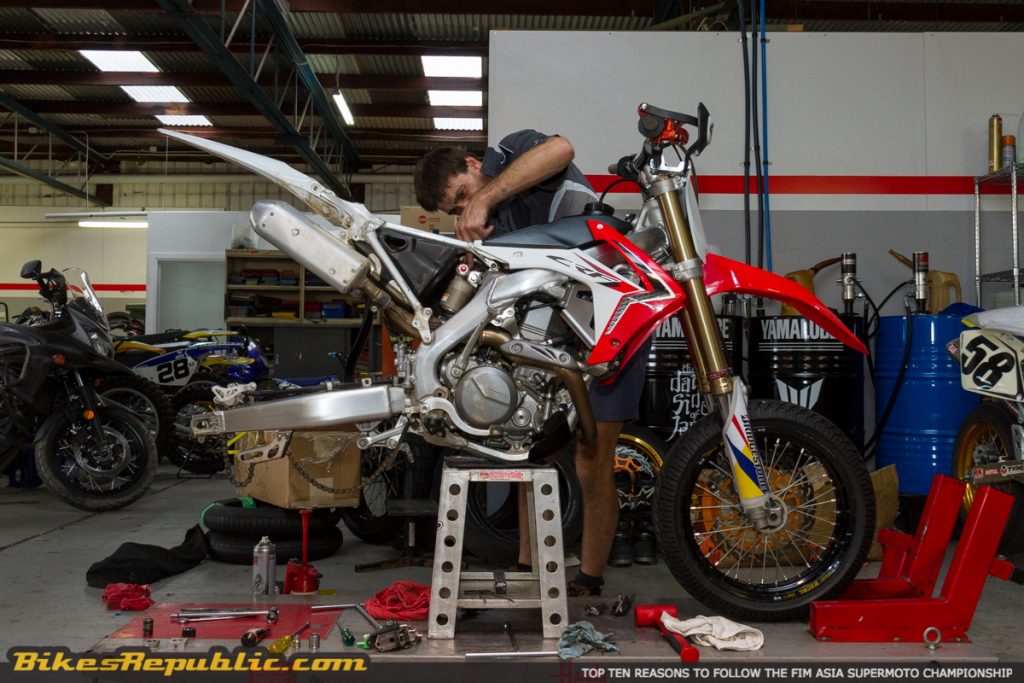 The motorcycles that compete in supermoto usually originate from motocross bikes (enduro bikes in some cases), with the wheels swapped out for 16-, 16.5- or 17-inch ones and shod with sticky rubber. The suspension is also reworked to have less travel and stiffer for the high-speed stresses of the road course. These aren’t purpose-built racing prototypes like in MotoGP, but bikes that you and I could purchase from the shop down the block and modify for road riding or racing.

6. THE PERSONALITIES
Since supermoto isn’t much like other motorsports, there are plenty of colourful characters in the paddock and on track.

2016 FIM Asia Supermoto Champ, Gabit Saleh from Malaysia rides aggressively almost like a high-speed bulldozer that smashes through all the different sections. Being a part-time stunt rider, he’s especially entertaining when he flies through the air. His signature is his head twitch, a sign that he’s switched on his personal “Race Mode.” 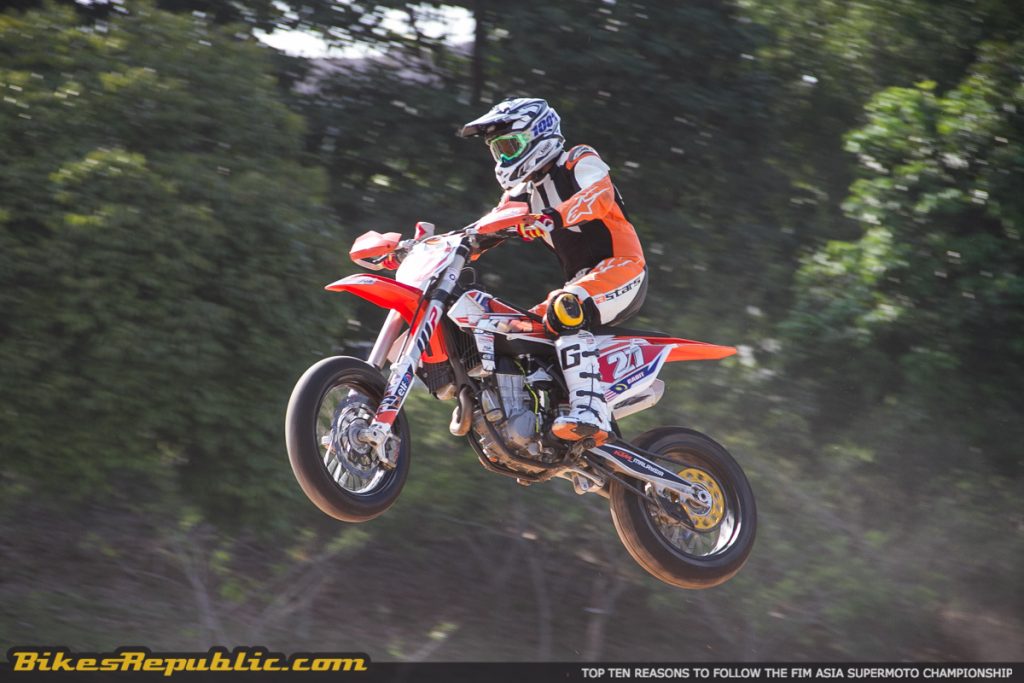 Gaban Saleh, Gabit’s older brother could be described as the road warrior when he races. He’s probably the hardest rider to pass as he puts up a huge fight rather than ceding a position easily. His riding style is also very aggressive and a thrill to watch. 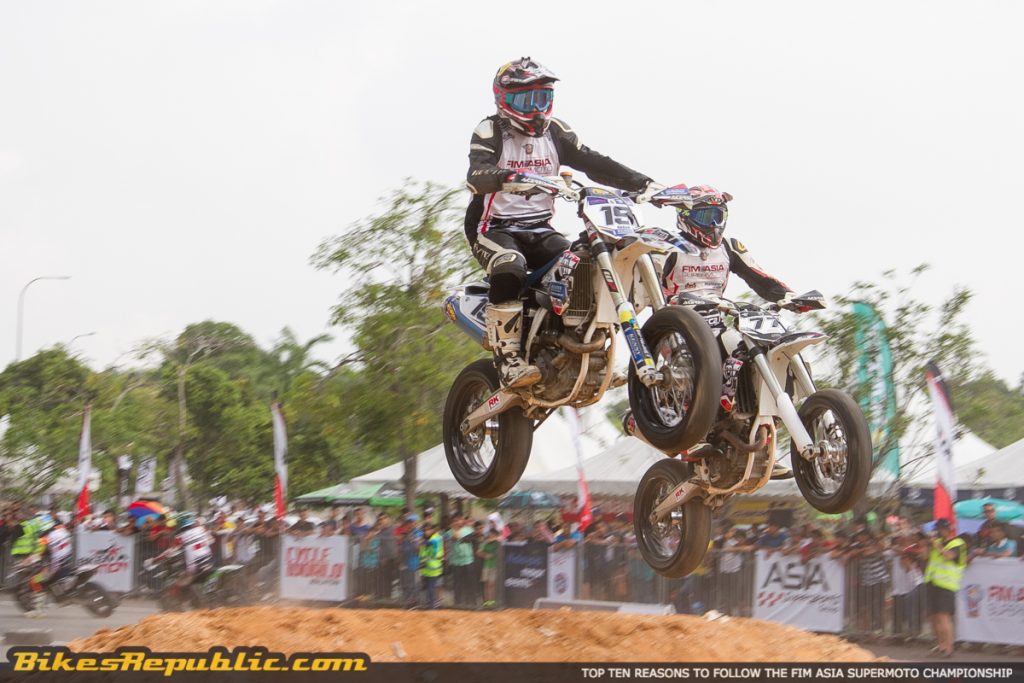 Lewis Cornish from the UK is quiet and unassuming but he is just superfast and never gives up. He’s unafraid to charge through the smallest of gaps to grab the win – as Trakarn found out in the final round in 2015. 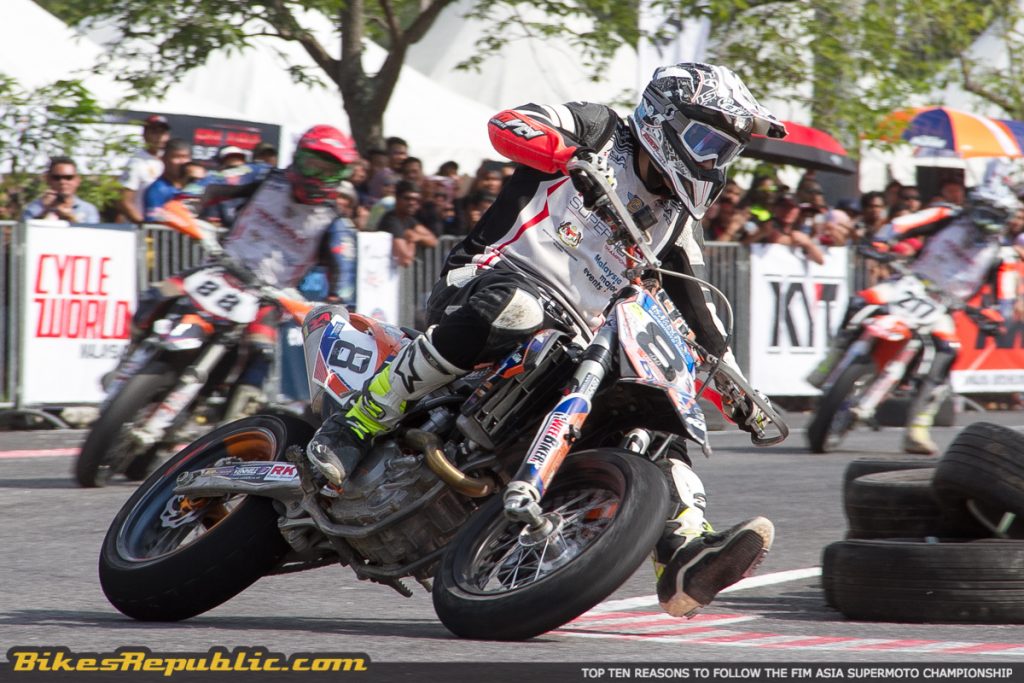 10-time British Supermoto Champ, Chris Hodgson is always jovial and happy-go-lucky but takes no prisoners on track. He can spot an opportunity to pass when no one does. His signature are his long, long high-speed drifts. 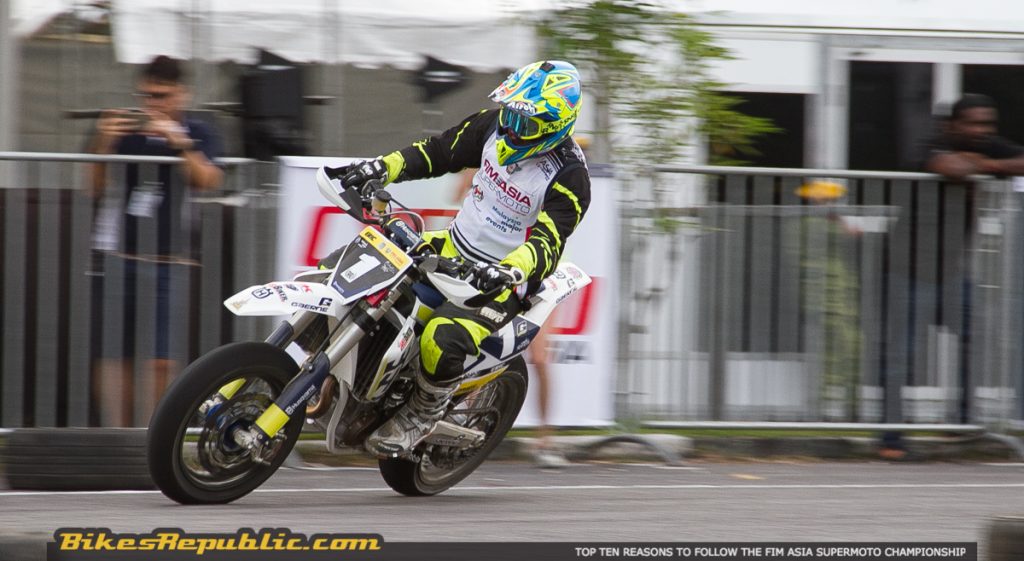 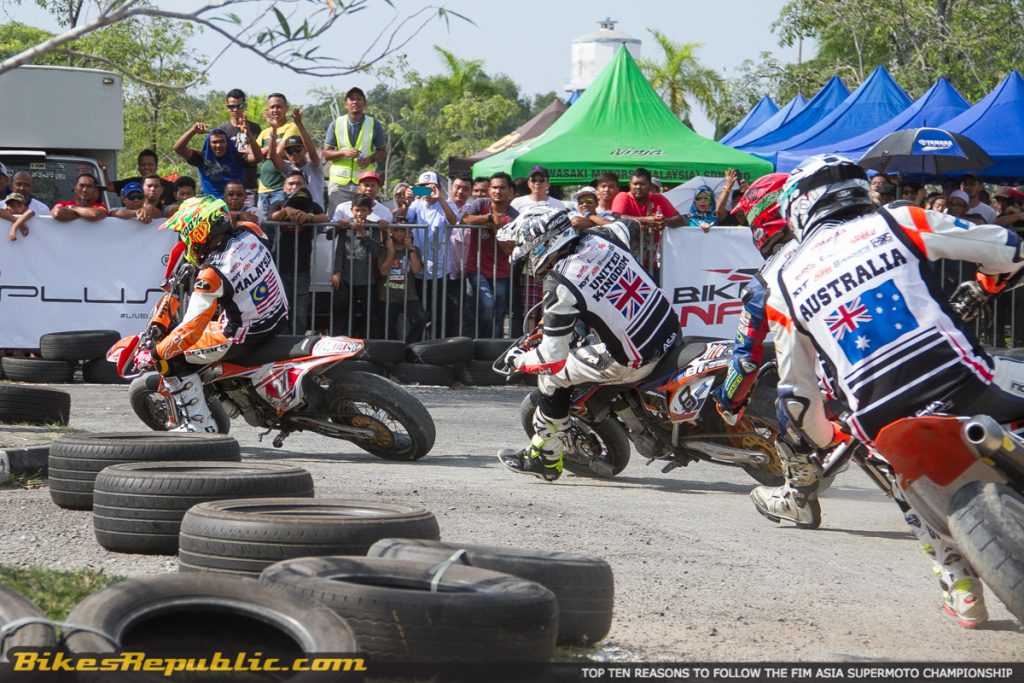 Whereas other forms of motorsports cordon off the spectators far away from the action on track, you could view supermoto from almost up next to the riders as they flash by. You could hear the rear tyres howl when the riders drift into corners, smell the exhaust and rubber, feel the rumble in your chest and even see the expressions of the riders. 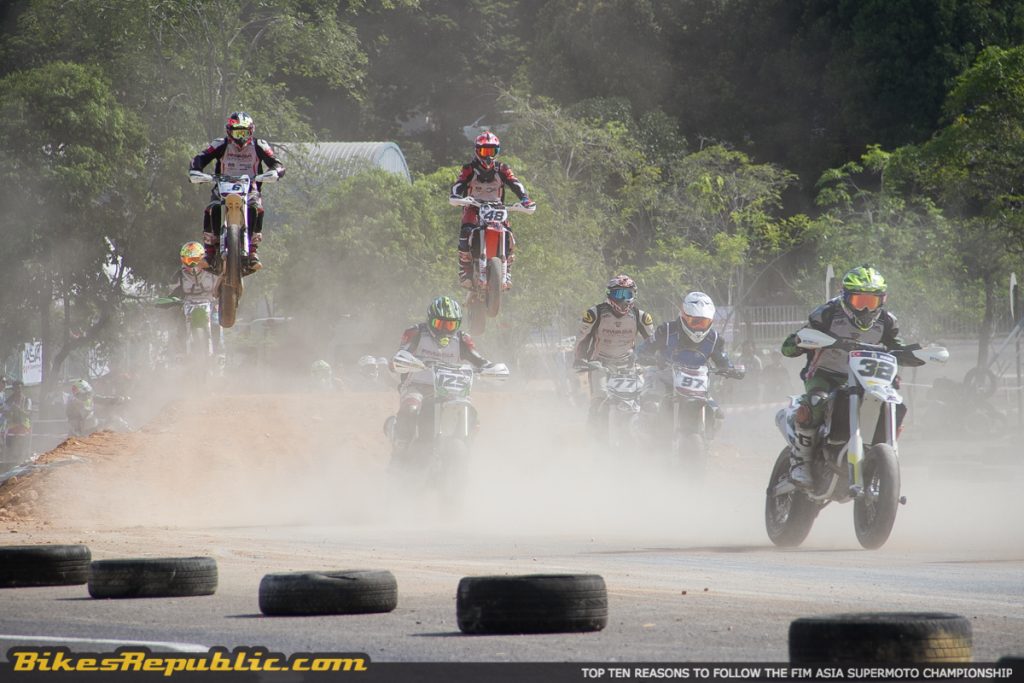 Supermoto combines roadracing, motocross and flat track disciplines into one race. That means instead of having to visit three different races, you could watch all three in one race. There are two sections to each track: A tarmac section and a motocross section consisting of mountain-like jumps. 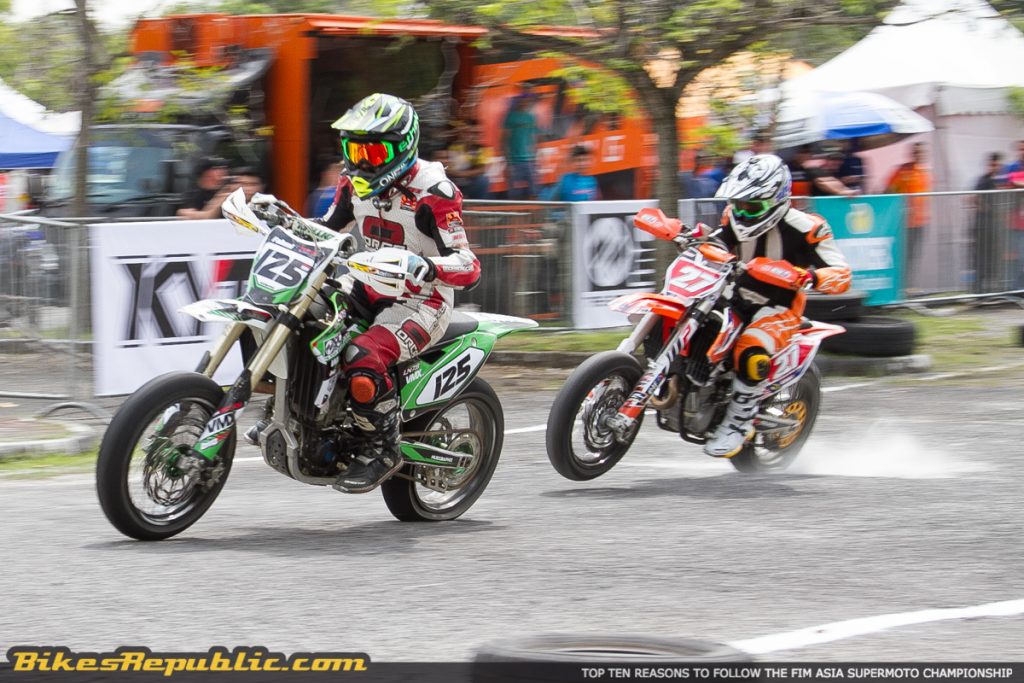 The riders have to perform well in all disciplines; being good at just any two, what more if just one of the three, would mean getting left behind. 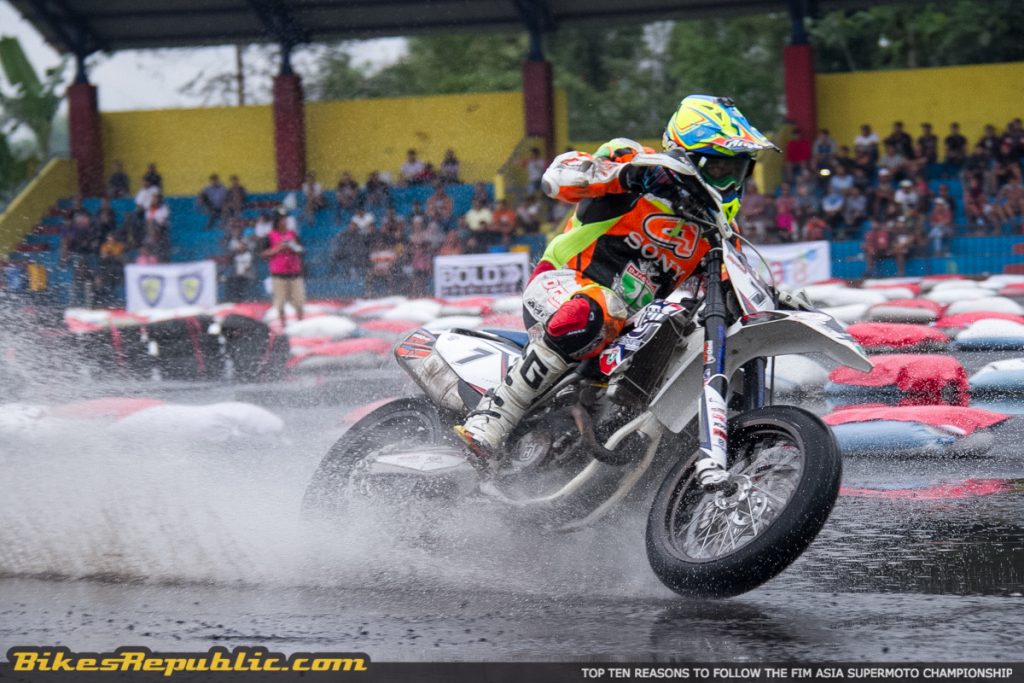 As in the show goes on regardless of weather.

For example, the second round of the 2016 season was held in Malang, Indonesia. The weather had been hot all week, then rain came down with a vengeance during the weekend. The torrential rain was so heavy that puddles around certain parts of the track were ankle-deep. Yet, that didn’t stop the riders from battling tooth and nail against each other as if it was a jetski race. 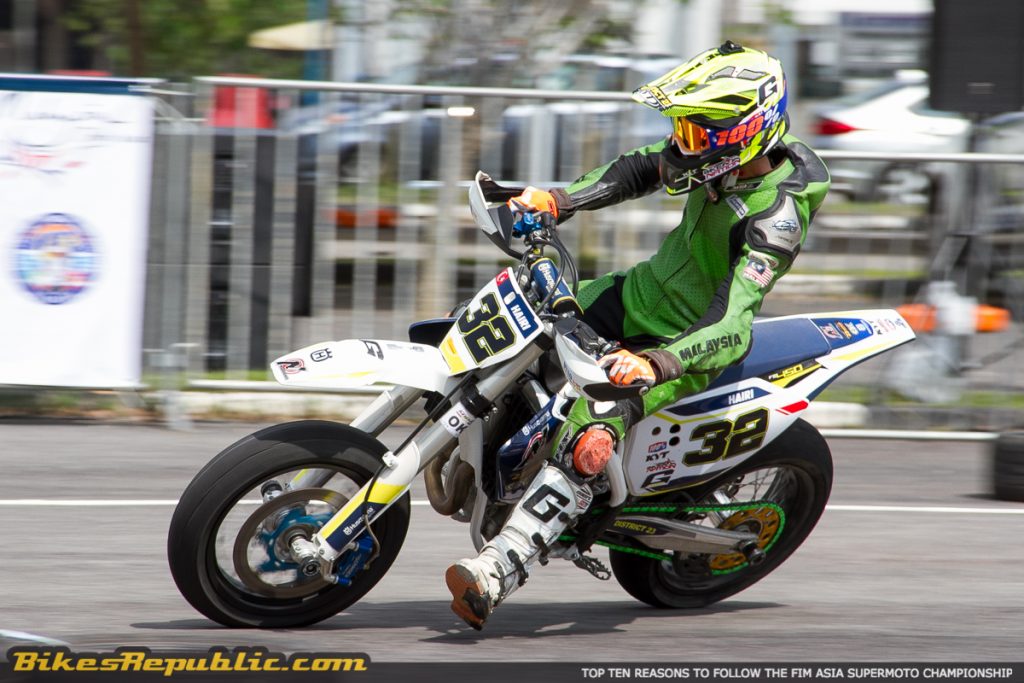 Apart from the inclusion of both tarmac and offroad sections, drifting and powersliding are the hallmarks of supermoto racing.

The rider would blast down the straight into the braking zone, snap the rear wheel outwards and howl into the corner, and finally powerslide out, laying down a dark line on the track. 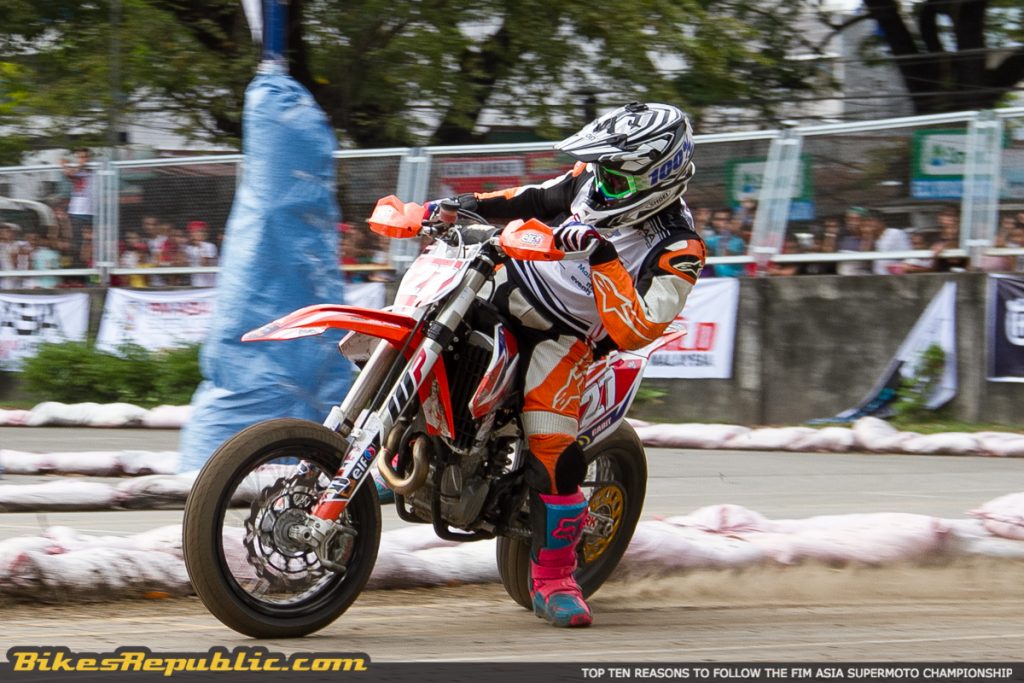 Seeing them do so lap after lap, laying down their bikes almost on their sides as they slide through corners is one of the most spectacular sights in motorcycle racing. As was in Indonesia, they’d even do it in the rain! 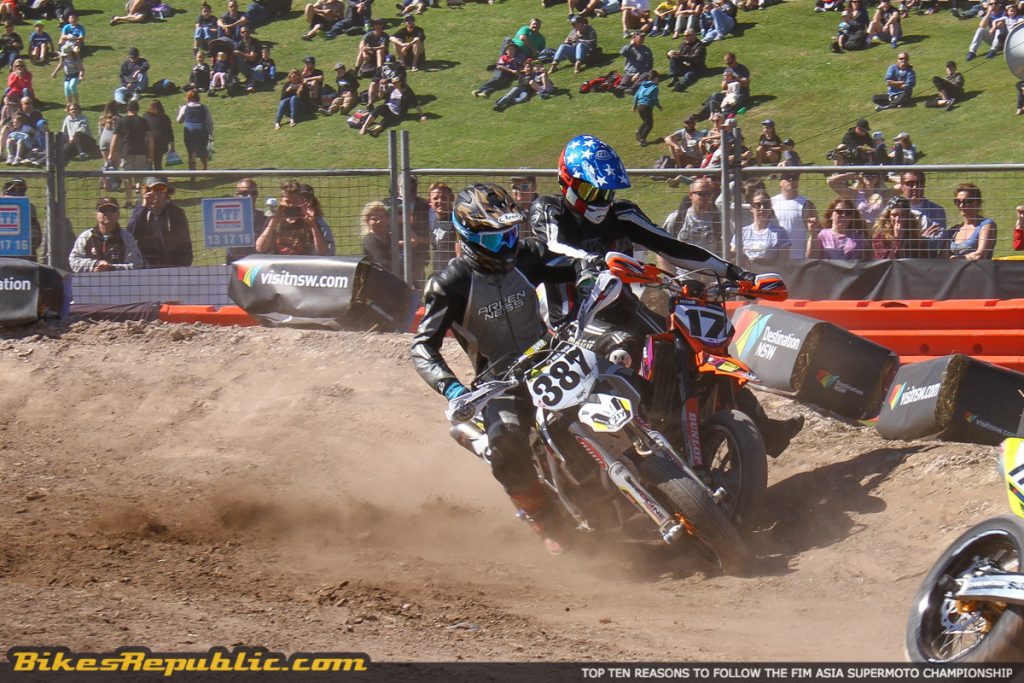 Well, what is racing without the action, right? But supermoto racing is elbow-to-elbow in the literal sense. 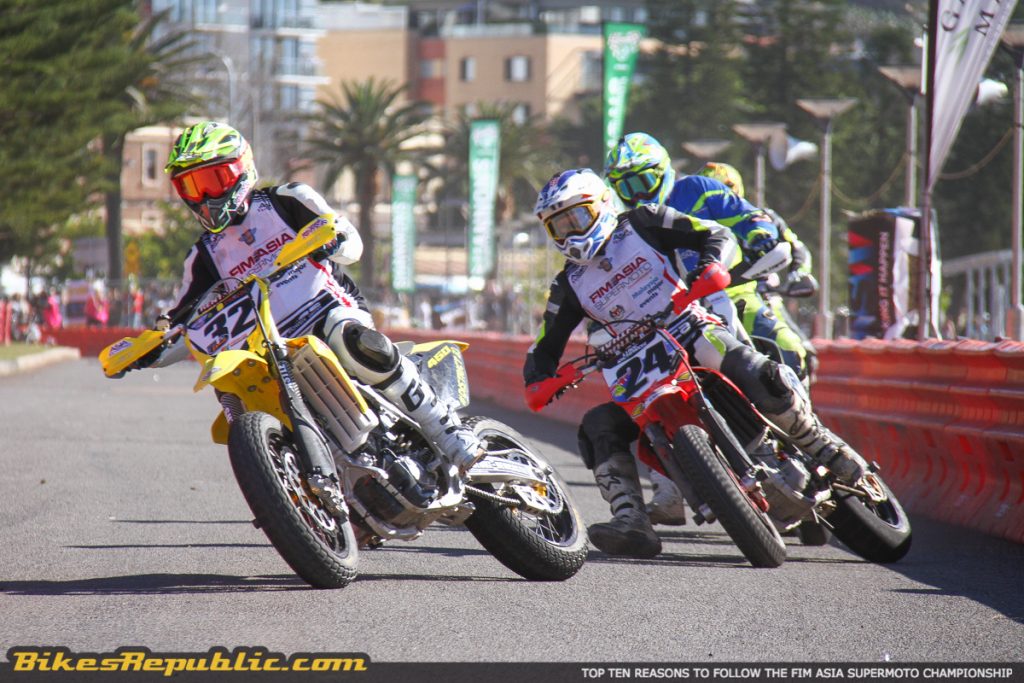 Supermoto race starts are always heart attack inducing as 30-odd riders pile into one tight corner, similar to motocross starts. You could see the riders having both elbows out, pushing other riders inside and outside away from him, while his opponents do the same to push him out of the way in return. 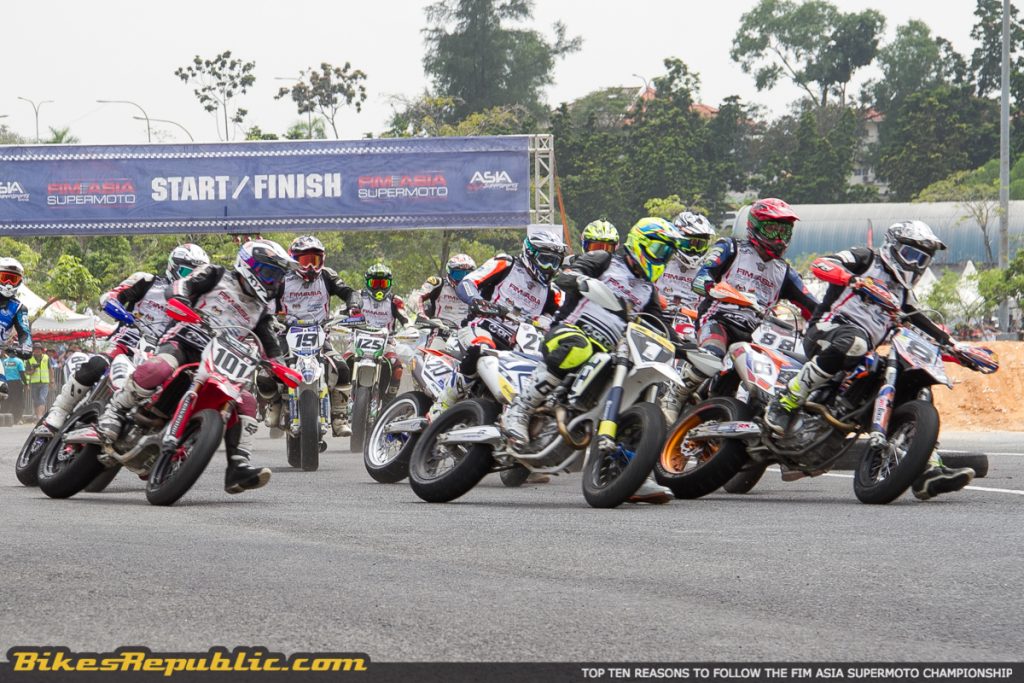 And while most motorsports see the greatest excitement at the start and a couple of laps after, supermoto features dogfights throughout the field, throughout the race. Lesser humans would be on their heads in no time.

So there you go. Do start following supermoto if you haven’t already, you could find many great videos on YouTube and the internet. Make sure you follow the latest reports on the 2017 FIM Asia Supermoto Championship at their official Facebook page and here at Bikes Republic.