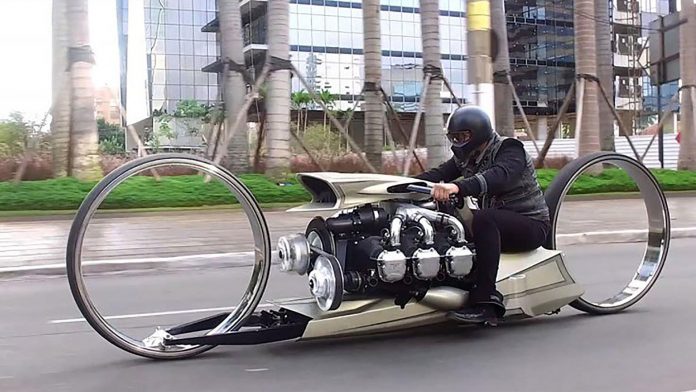 If you want to see what creativity… well, more like eccentricity, audacity and insanity in the automotive world, look no further than motorcycles. The TMC Dumont illustrates that point to a tee.

The TMC Dumont was built by Tarso Marques and his team. The Brazilian raced for the Minardi team in Formula 1 from 1996 to 2001. It was Malaysian driver Alex Yoong who replaced him in 2001 with three races to go.

The bike looks stunning enough with the those massive 36-inch hubless wheels alone but do spare some amazement for the engine. That’s because it’s a Rolls-Royce Continental V6 aircraft engine which punches out 300 bhp.

The Dumont makes true the adage of a motorcycle consisting of nothing else but an engine and two wheels. The rider sits behind the engine between his legs and in front of the unshielded rear tyre. Its entire chassis sits just a couple of inches above the ground. Hope there’s not speed bump ahead…

Yes, we also wondered where the brakes?

While it may be as practical as using a samurai sword to shave, the custom world heaped praises on the TMC Dumont. In fact, it was conferred the Best of Show award at the 77thDaytona Bike Week.

Who says being eccentric doesn’t get you places?

”TMC DUMONT” My good friend @tarsomarquesoficial represents Brazil at Daytona bike week -2018. He really show all how to do it! He is a big inspiration source when it comes to show that nothing is to hard enough to achieve. Keep it up brother! . #tmc #tmcdumont #daytonabikeweek #daytonabikeweek2018 #rollsroyce #custombike #hubless #hublesswheel