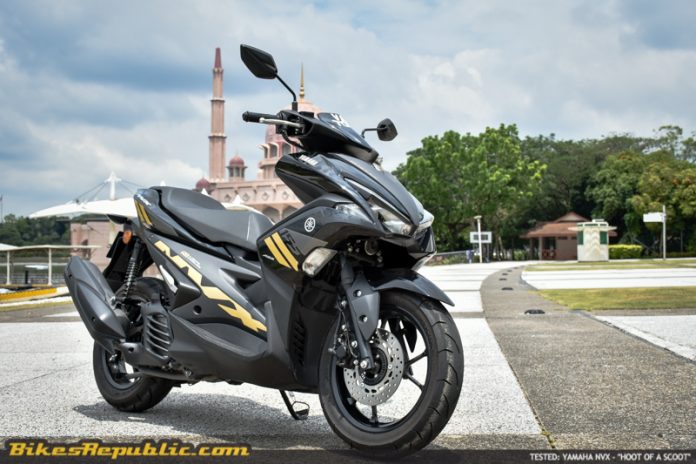 Yamaha positions the NVX as a premium scooter.

The NVX offers a sportier ride. 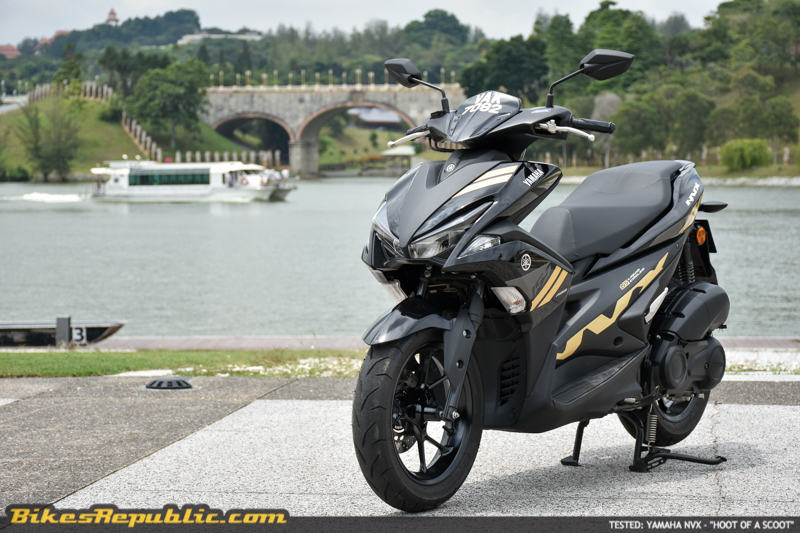 We motorcycle reviewers should have an extra title tagged to our designation. Part-time Sales Executive should be apt.

The very first person I met after picking up the NVX from Sg. Buloh asked a set of of questions that would go on to form the template throughout the time the bike was with me. 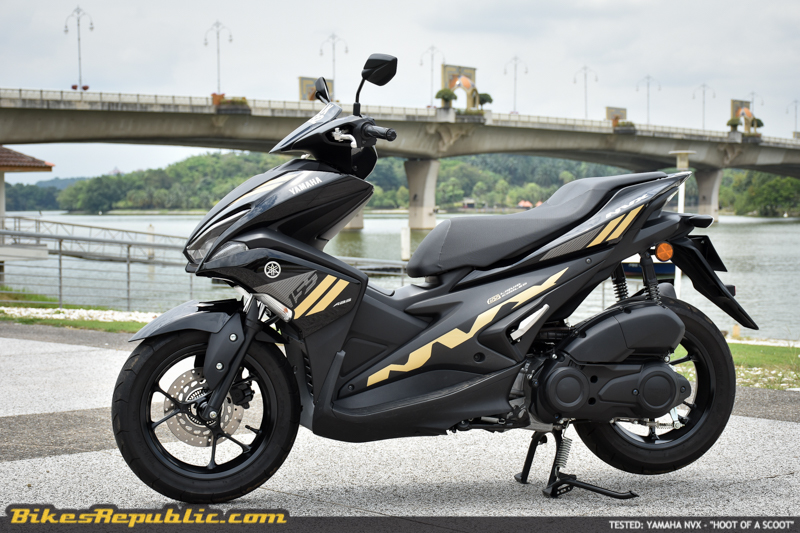 I answered at least one person, sometimes even three separate ones per day. I bet I would’ve sold a few and use the commission to buy myself that astronomical telescope I’ve been lusting after. One thing is clear, there’s lots of interest for the Yamaha NVX. 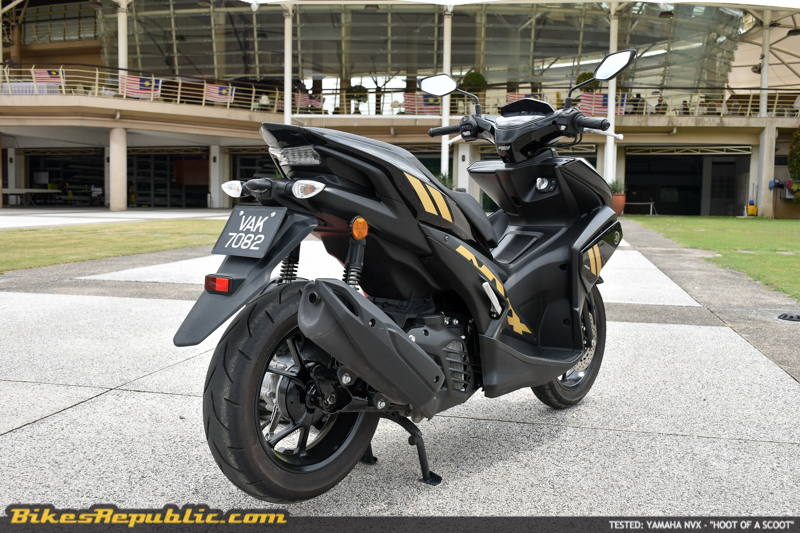 The Yamaha NVX first was unveiled by “The Doctor” Valentino Rossi himself during the 2016 Malaysian MotoGP. Also known as the Aerox in certain countries, Malaysian netizens went wild as soon as the news and pictures hit social media. 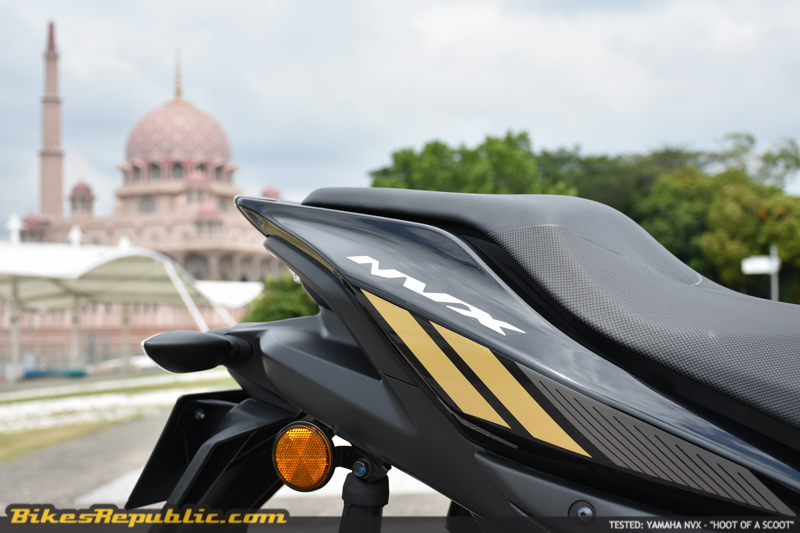 But we had to wait for another agonizing nine months before it was officially launched in July 2017 (click here for the launch event). We soon discovered that the “delay” was because firstly, Hong Leong Yamaha Motors (HLYM) had wanted to see how the model performed in other markets in terms of reliability. Secondly, HLYM had invested in the ABS machine in order to equip the NVX and future models with the system. Thirdly, HLYM wanted to ensure their technical department and dealers are fully trained on the NVX. Fourthly, HLYM needed to build up their spares inventory – nothing worse than for customer to own a bike without the necessary parts, would it? 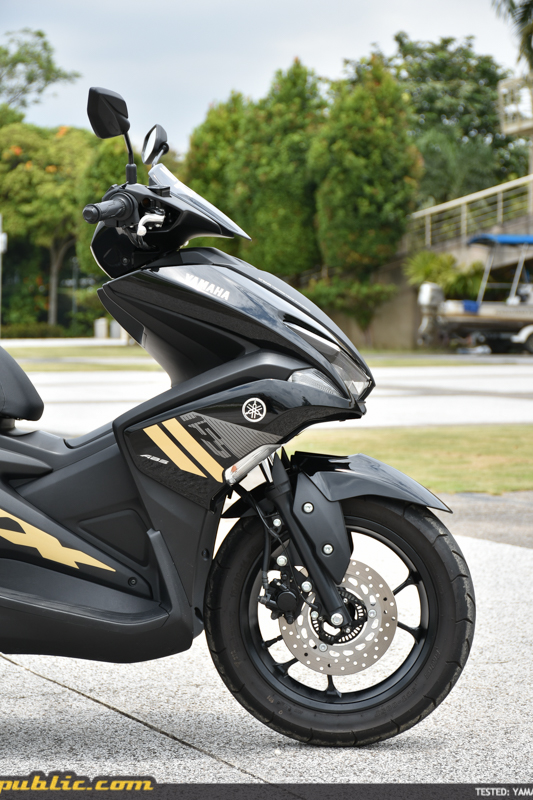 Well, the NVX is here and judging by how good the NMAX was, we and many prospective buyers were eager to find out more about the NVX.

Seeing a bike on stage during a launch was always somehow different from being up close to it in the real world.

The NVX is bigger than the other models in HLYM’s family of scooters, and definitely more aggressively styled and high tech. The design consists of sharply angled lines and panels, starting from the front, all the way to the rear. It has bigger wheels and beefy tyres. The central “spine” where the fuel filler resides is taller. The LED headlights has that “scowl” of the R25. In fact, the front end of the NVX shares the same character as Yamaha’s current crop of sportbikes, led by the YZF-R1. 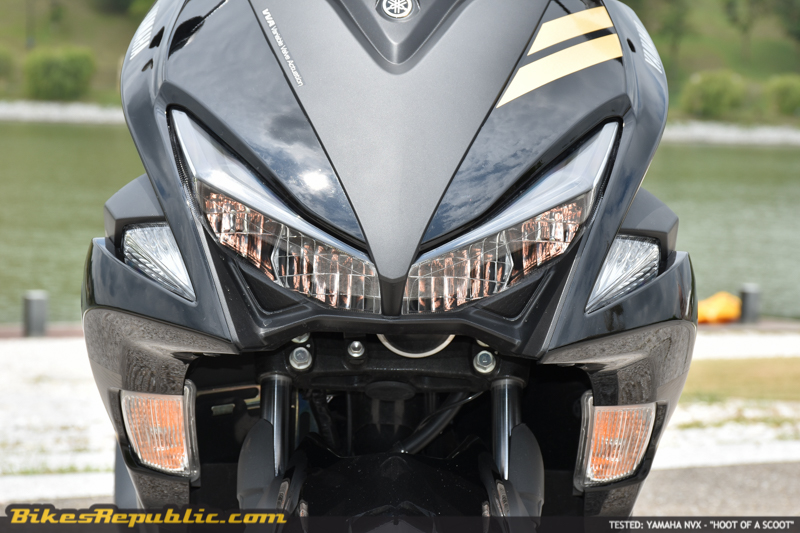 Climbing on the first time confirmed that the seat was taller than the NMAX’s, courtesy of the 14-inch wheels. (vs. 13-inches on the NMAX). The ergonomics of the NVX is more compact, like a kapchai with floorboards. There’s no space to extend your feet up front. 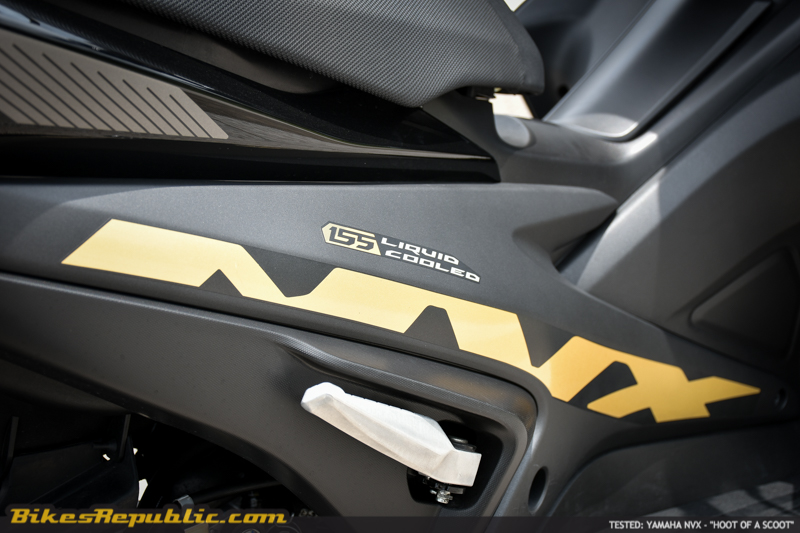 From the seat, you’re greeted by the 5.8-inch fully-digital LCD screen and a new ignition and locking system. The NVX uses the new Smart Key System, which is essentially a keyless-go setup. But it goes beyond that. 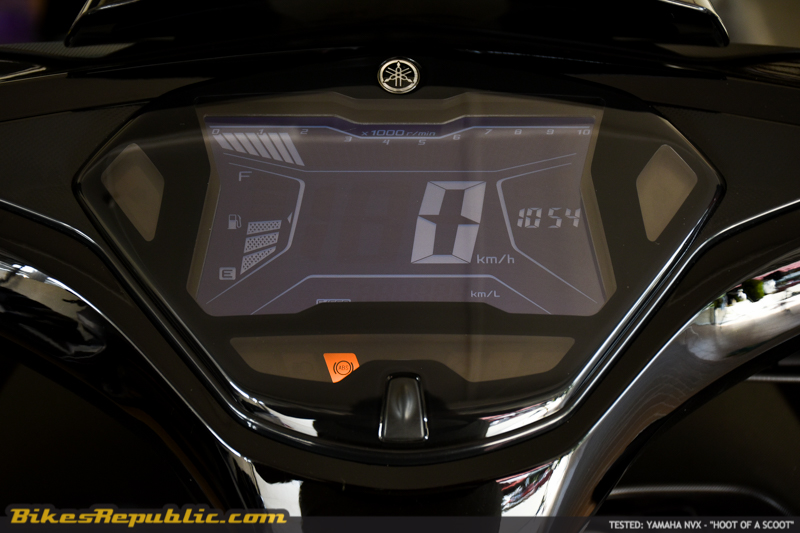 The rider needs to is disarm the immobilizer, then press and turn the “dial” to the desired function i.e. opening the seat/fuel filler flap/ignition on. Similarly, the dial will be locked in the LOCK or OFF position if the immobilizer hasn’t been disarmed. There is no way to start the engine, should the dial on the bike has somehow been left in the ON position, as long as the immobilizer isn’t disarmed via the Smart Key. We also discovered that the bike will emit very loud blips should the dial be left in the OPEN (to open the seat or fuel flap) position to remind us to turn it to OFF or LOCK. If left ignored, the immobilizer will eventually self-activate, disabling the engine from being started. We love this feature. 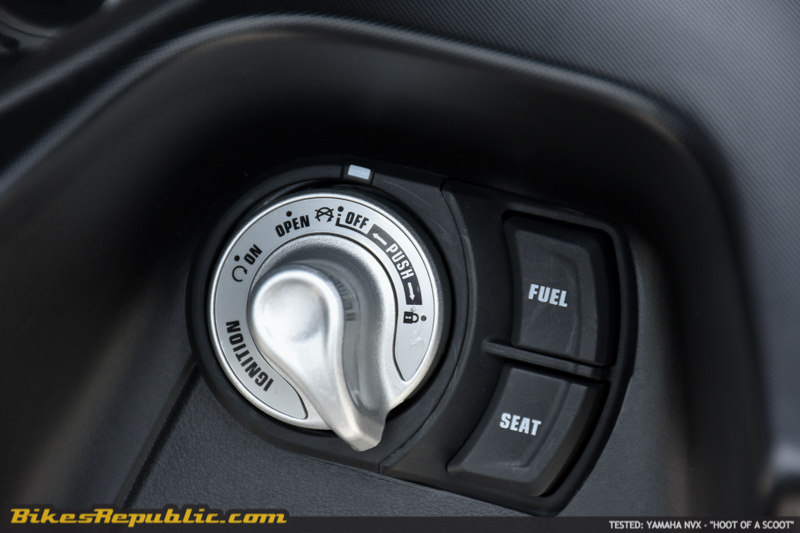 Starting up the engine exuded a muted but slightly sporty exhaust note. Twist the throttle and it was go time.

Speaking about the powerplant, the NVX’s engine shares the same Blue Core approach as found on the NMAX, including the Variable Valve Actuation (VVA) feature. However, the NVX is rated as an Energy Efficient Vehicle (EEV). Yamaha claims a scrooge-like best fuel consumption figure of 2.2 litres/100 km. Helping to achieve that efficiency is the “Start and Stop” function. 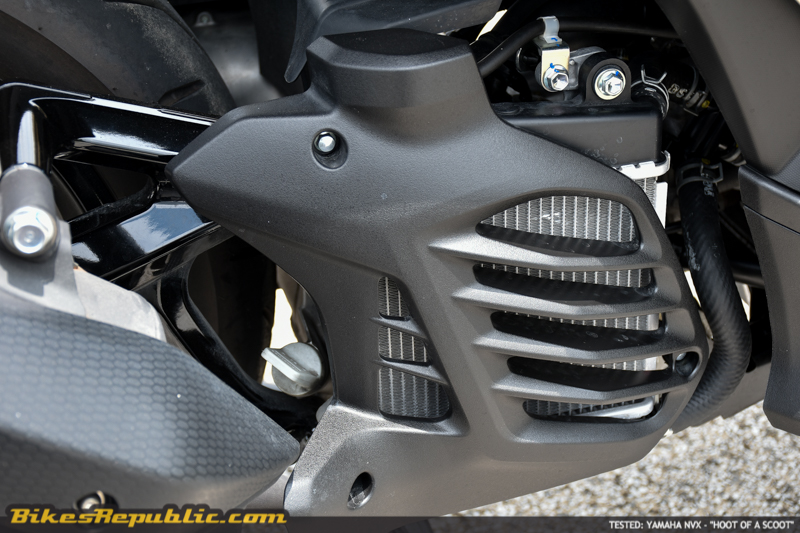 The Start and Stop system is toggled by the switch on top of the engine start button. With the system on, riding above 40 km/h to trigger it; the engine will then stop with the ignition and lights on when reach a full stop. A twist of the throttle will start the engine back up. Conversely, if you toggled the system off, the engine will continue to idle when you stop. Simple. 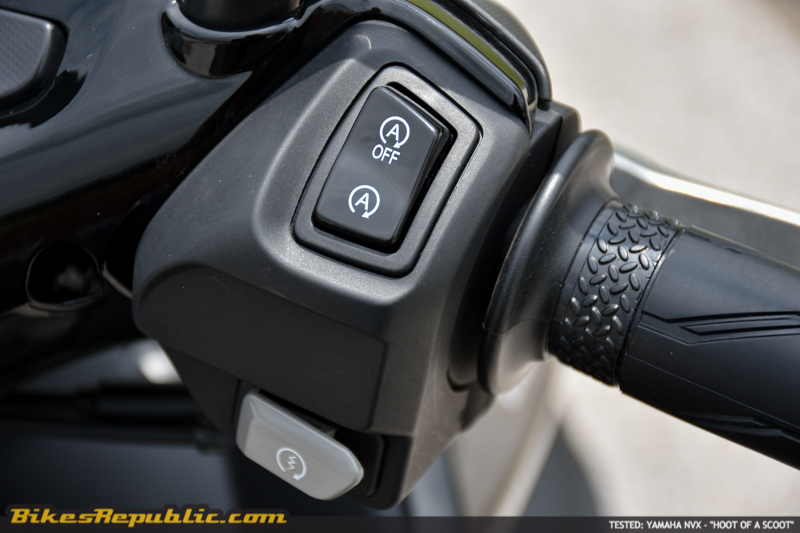 Although the engine shares the same architecture with the NMAX, it felt livelier on the NVX. Throttle response and fueling was spot on, there’s power as soon as you turn the twist grip. There’s still enough grunt left even when you’re riding at 110 km/h. 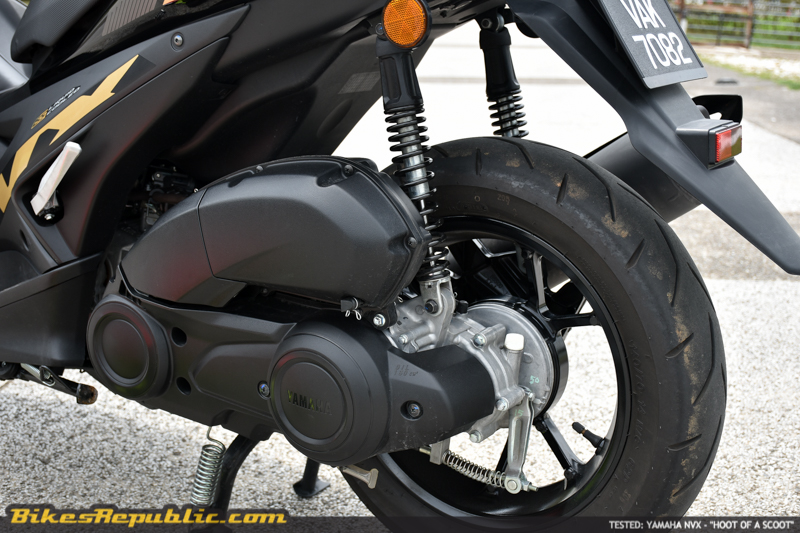 Right away, the NVX demonstrated how light it was on its feet, but with an added bonus. The suspension and fat tyres provided a high level of confidence to sling through corners and swerve through traffic with conviction. Scooters would normally feel “flighty” at the front due to their smaller wheels, yet there was no indication the NVX was going to lowside as you flick it around. 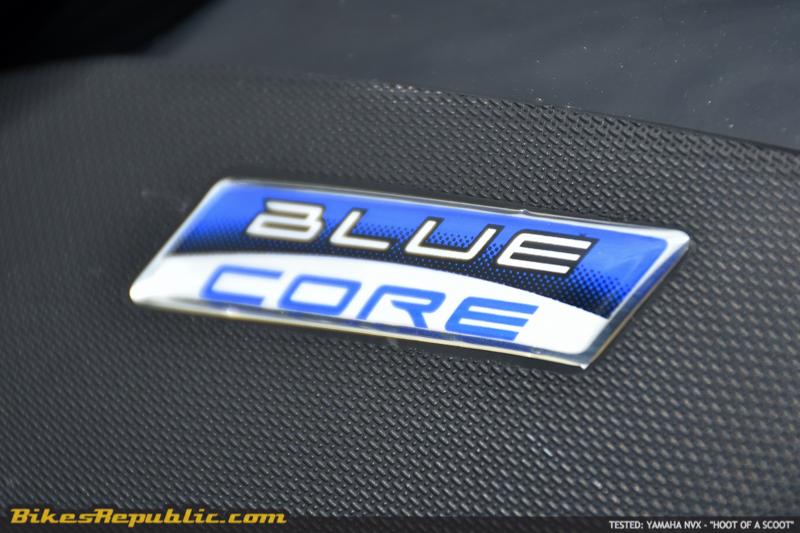 I got into a heavy shower right after taking delivery. The tyres may look semi-slick but they gripped very well over the wet road. Apart from that, I was really thankful for the 25-litre underseat storage space, as I had transferred my rainsuit over from my personal bike’s topbox, besides stowing my laptop bag in it. So now I stayed dry with the rainsuit on and my laptop stayed dry under the seat. There is also a compartment up front, underneath the left handlebar. It has a cigarette lighter socket for you to plug in an adapter and charge your phone. 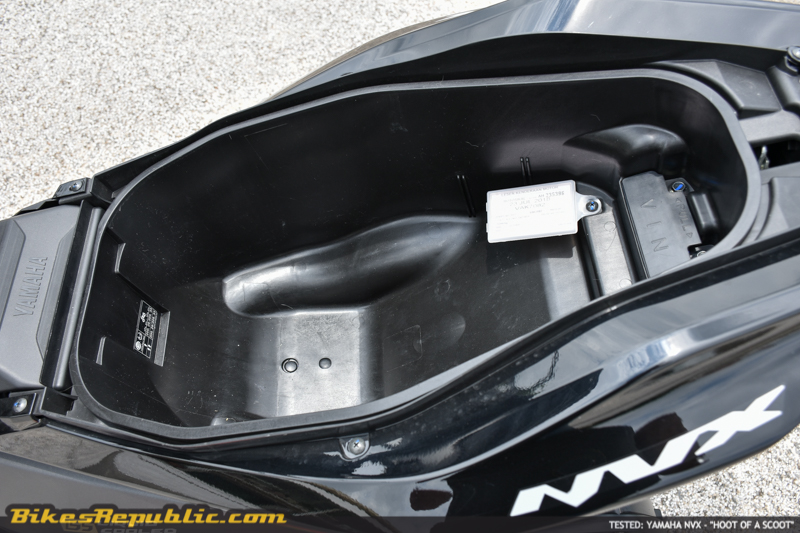 Out on the highway, the NVX took no effort in reaching 110 km/h. It had no trouble climbing to my preferred cruising speed of 120 km/h from a standing start either. The tachometer showed 9000 RPM at that speed, so there’s another 1000 RPM to go. The engine never once felt like it was going to disembowel itself at high speeds. The larger wheels and tyres have in effect given the bike taller gearing, therefore cruising was smooth. 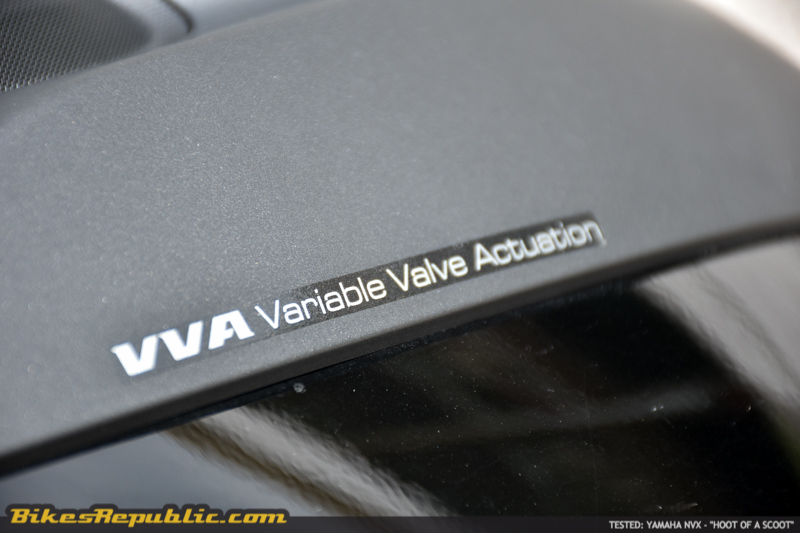 But where the NVX truly shone was commuting in the city. Riding an agile motorcycle with controlled aggression in Kuala Lumpur equals living for another day. It felt like I was riding a (fast) bicycle as I swerved in and out of traffic, squeezing between lanes and shooting through sharp corners. There was lots of feedback from the front tyre, and it had never threatened to let go as you flick the bike from side to side. As a matter of fact, the NVX didn’t mind taking sweepers with the throttle pinned open, either. It was very stable for a small-sized scooter. 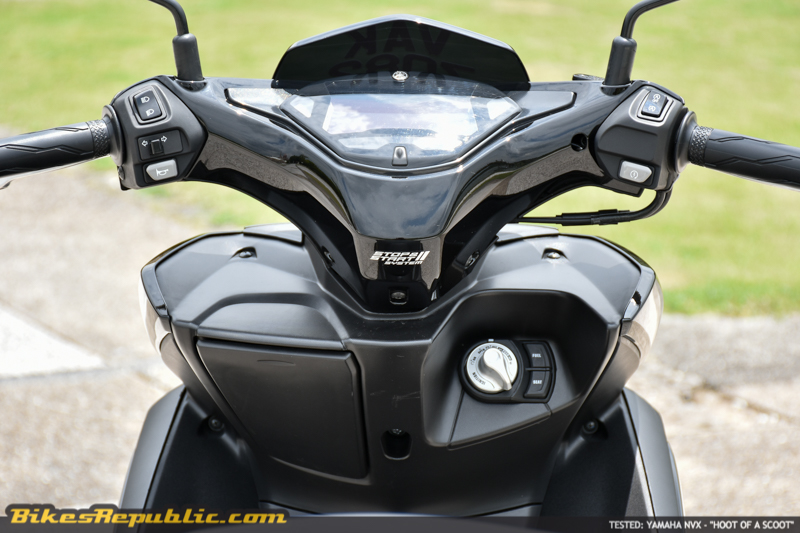 The brakes were strong a definitely helped a lot, too. The ABS worked as it’s supposed to when I had to brake hard in the rain to avoid a car that had cut me off.

Truth is, I used to question why scooter and kapchai riders like to swerve around, climbing onto sidewalks to park, slipping by obstructions, and committing just about any general buffoonery. The answer is: Riding a lightweight motorcycle is just pure fun! 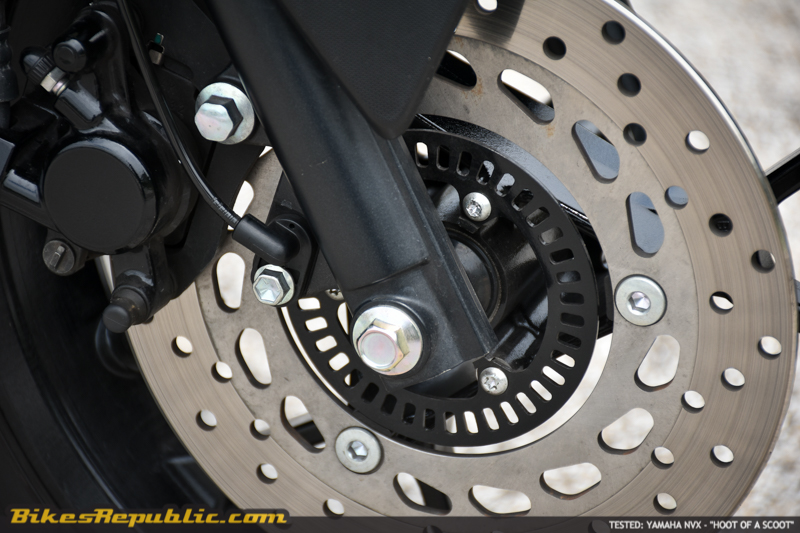 I didn’t have to worry about the clutch and correct gear selection; I didn’t have to stop as much when lane splitting as the NVX was narrow enough; and I can sure as heck outmaneuver anything; plus the freedom of not needing to shoulder my heavy backpack. 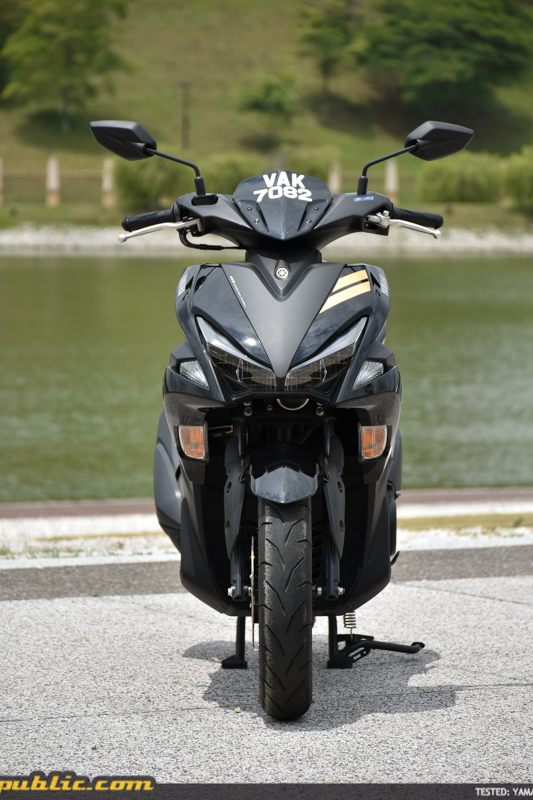 Additionally, the NVX was truly fuel efficient. I didn’t manage to obtain the 2.2-litre figure due to aggressive riding, but I once saw 2.8 litres/100 km. I had only filled up twice in the one week with the bike, the second time being when I returned the bike (I didn’t want to return a test bike on empty). 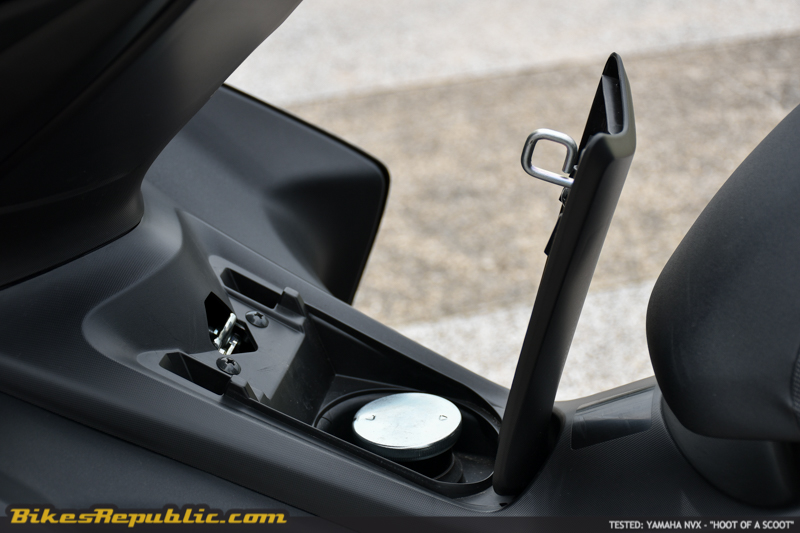 Shortcomings? Well, just like any scooter, the NVX’s main enemies are potholes and sharp bumps. The NVX is surprisingly well-sprung as it is, but the road conditions in KL are nothing less than embarrassing. Deep potholes caused the rear struts to hit their bump stops when I rode two-up with my wife, but bear in mind that we weigh a total of 150 kg. Lighter riders shouldn’t worry. 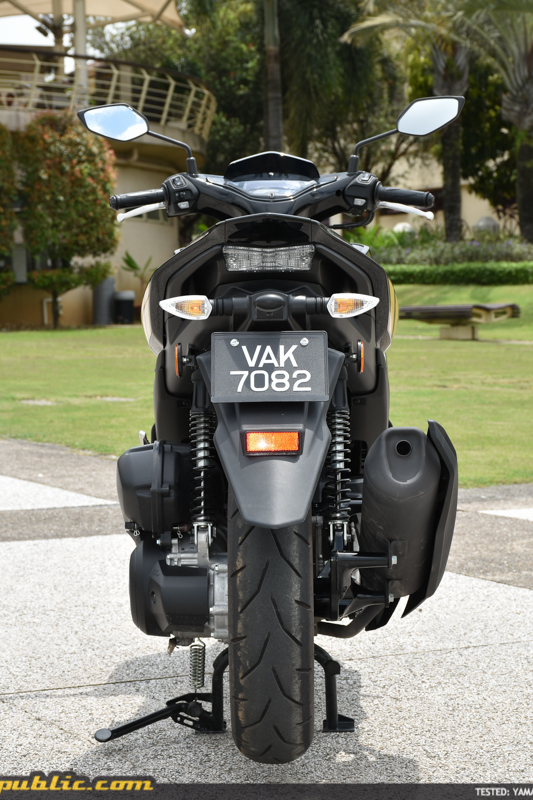 So there you have it. The answers to all your questions pertaining to the Yamaha NVX. On a personal note, I loved it, and I don’t mind having one to complement my other bike. I looks great, works great and went great, that’s why it’s a hoot of a scoot. 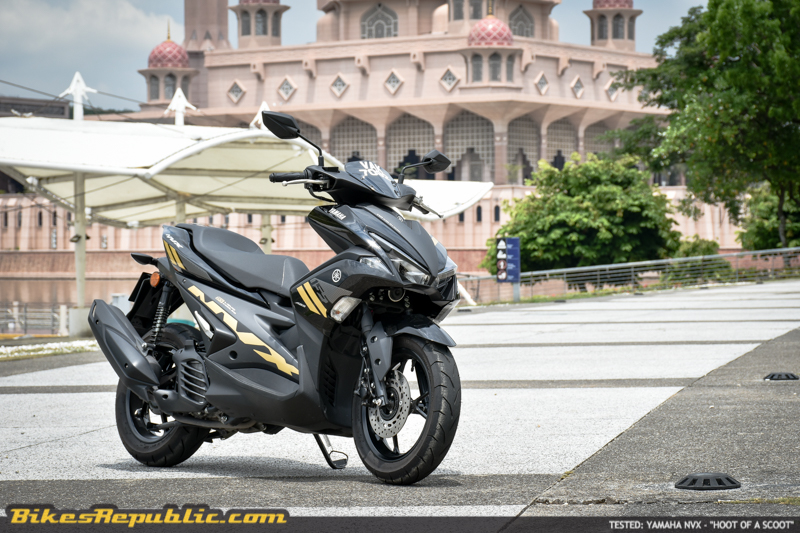