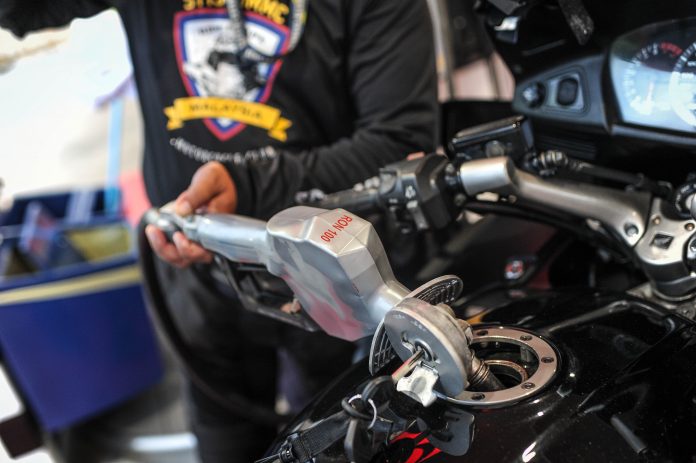 Lets be honest here, how many of us really do care about the molecular properties of the petrol we use? Most of us are driven by the price of fuel and as such would simply use the cheaper RON 95. Every once in a while though there are some who will fill up on the more expensive RON97 or even Shell’s V-Power Racing under the false assumption that it “cleans up” the engine. 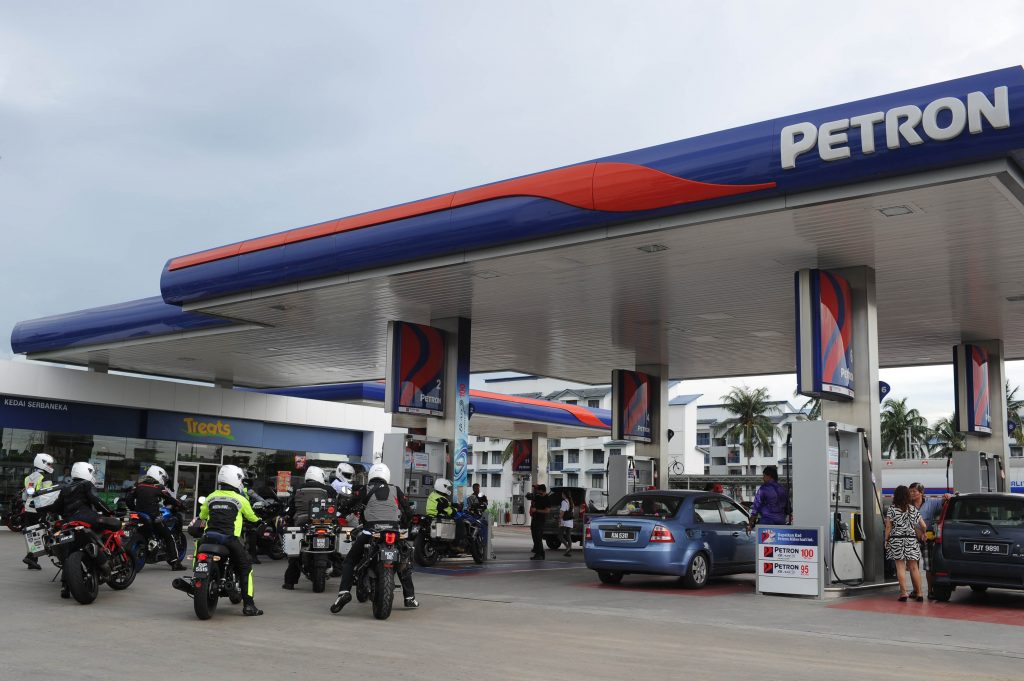 Yes that is a false belief because it is not the fuel that cleans the engine but the lubricant. What is true though is that most Malaysians are a price sensitive bunch, so the cheaper the better. But is cheaper always better though? 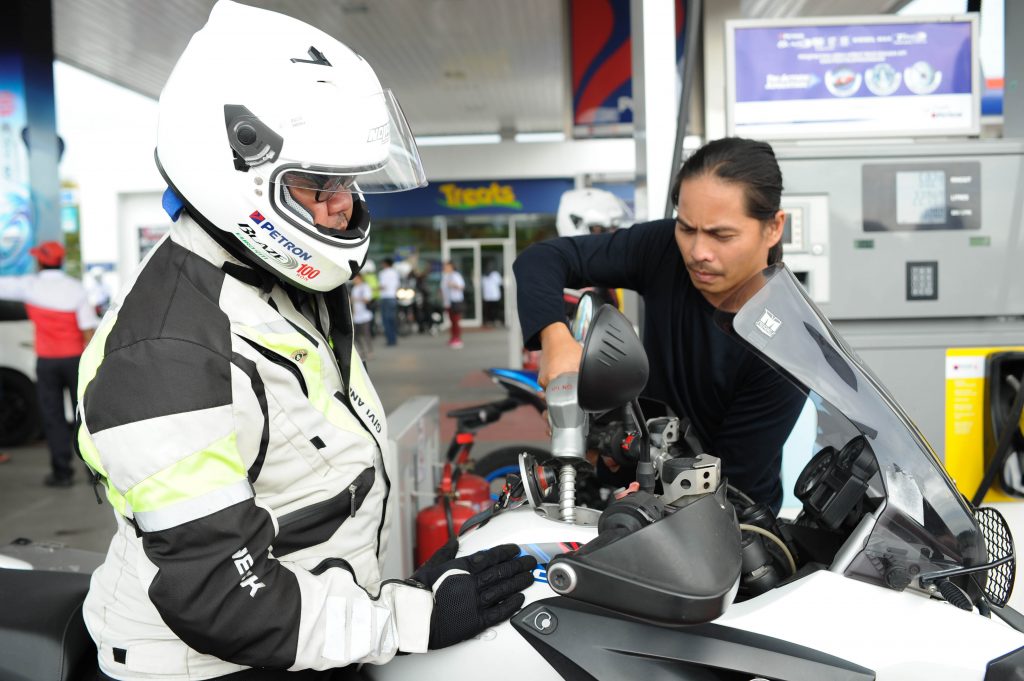 Petron recently invited us for a near 1000km ride to Penang and back via some selected stops to try out their Blaze 100 fuel. The only catch? We needed to bring our own bikes or bikes we were familiar with, and the tank must be close to empty on the morning meet at the Petron station along the MRR2 near Selayang. 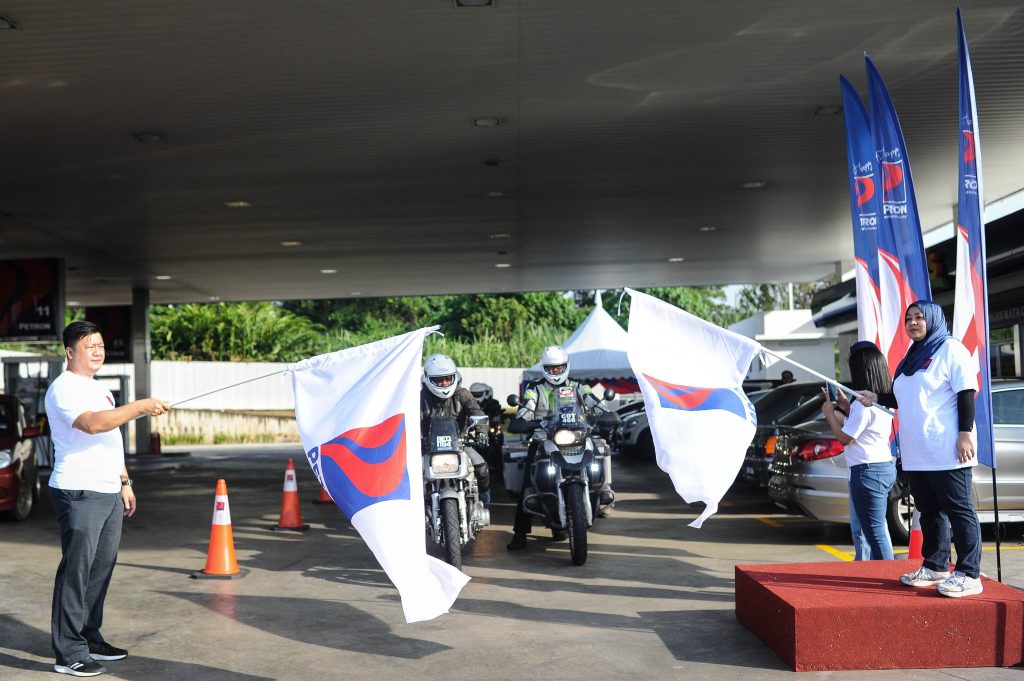 I didn’t want to ride any of my bikes because one has a puny 8 litre tank and the other is shod with Pirelli Super Corsa tyres which would have been a nightmare or worse in the rain. So I borrowed a bike which I had already rode a couple times and understood its character – the Triumph Tiger XCx. 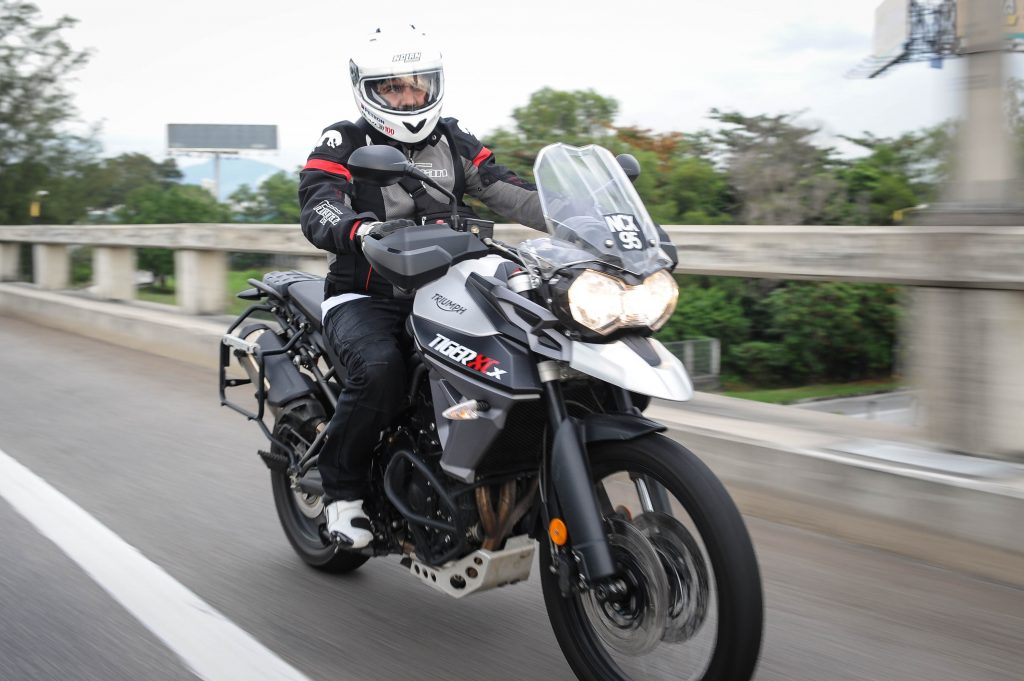 Tall and comfortable with a sweet three-cylinder engine, and cruise control too, the XCx is said to be one of the best dual-purpose bikes in the business. And the best part about the bike is most probably the engine. The 800cc, triple-cylinder engine is rich in torque and loves to rev, pulling away from tailgating cars on the highway was as simple as twisting the throttle, no downshifts necessary. Sometimes. The only drawback was that the engine tends to be thirsty if you cruise at a constant 150-160km/h. But then again, you really shouldn’t be cruising at that speed. 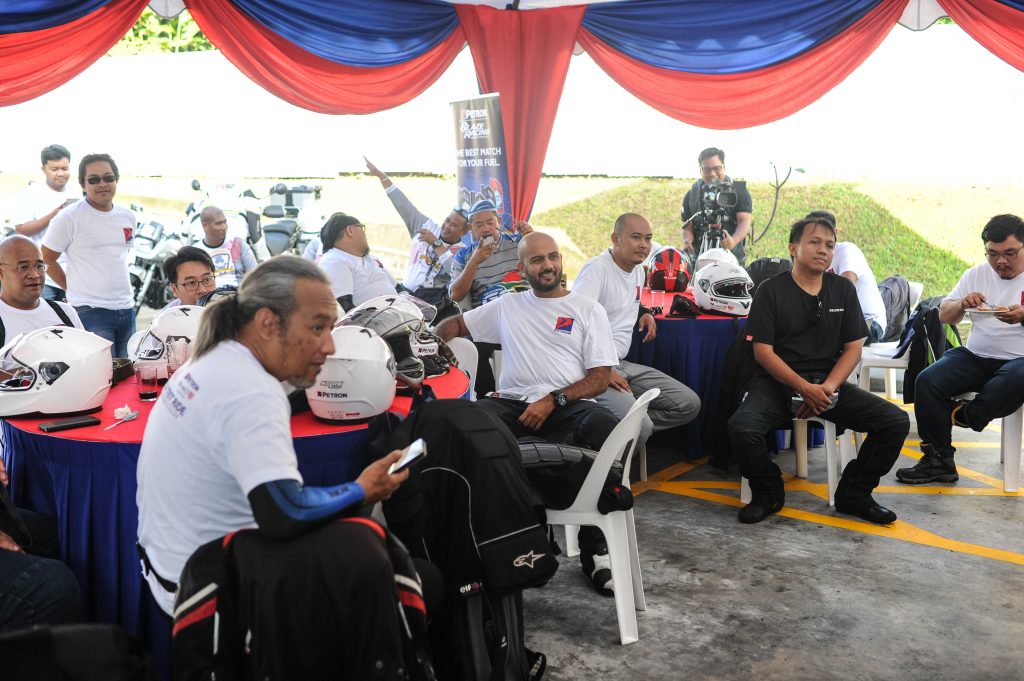 “We hope you enjoy the ride and feel the difference that the RON 100 fuel has to offer,” said one of the Petron representatives right before the flag off. 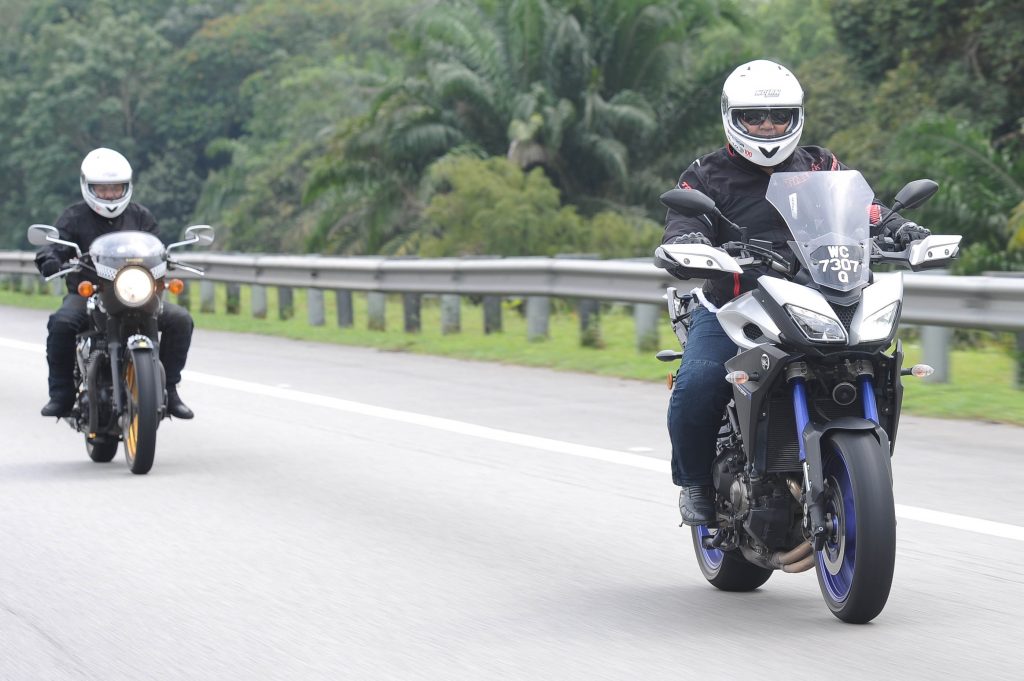 We hit the road at about 915am, with a tank full of Petron Blaze 100 (as it is officially called) super fuel, riding towards the Tapah R&R which was about 150km from where we were. 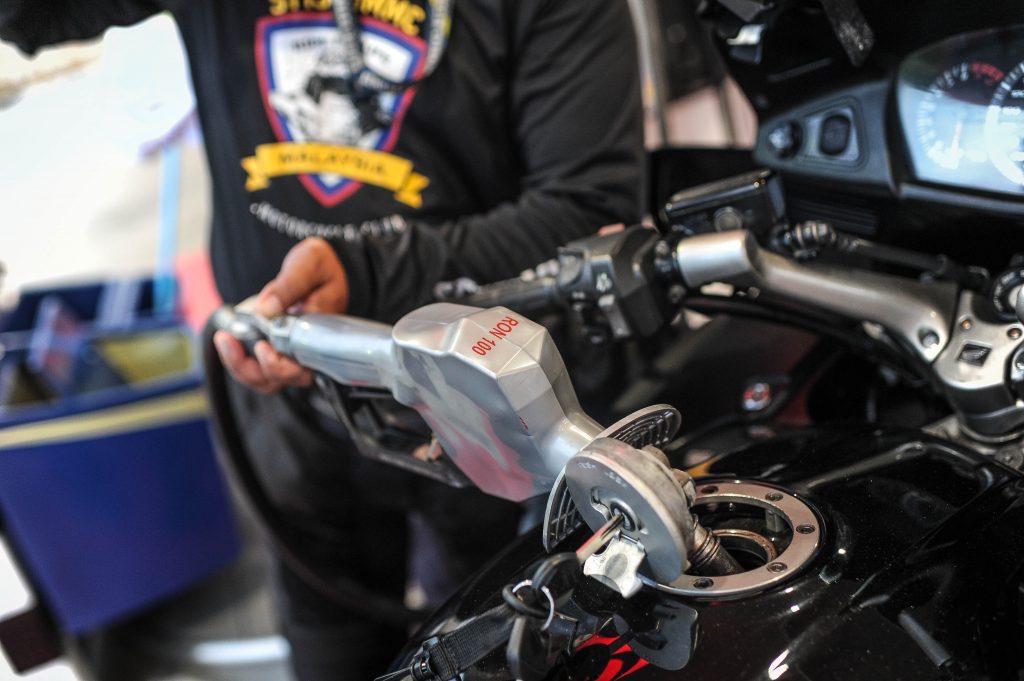 Petron’s Blaze 100 fuel is supposed to give your bike more power as it uses a special formula that gives it an edge over the rest – it’s called the “Tri-Action Advantage Formula”. 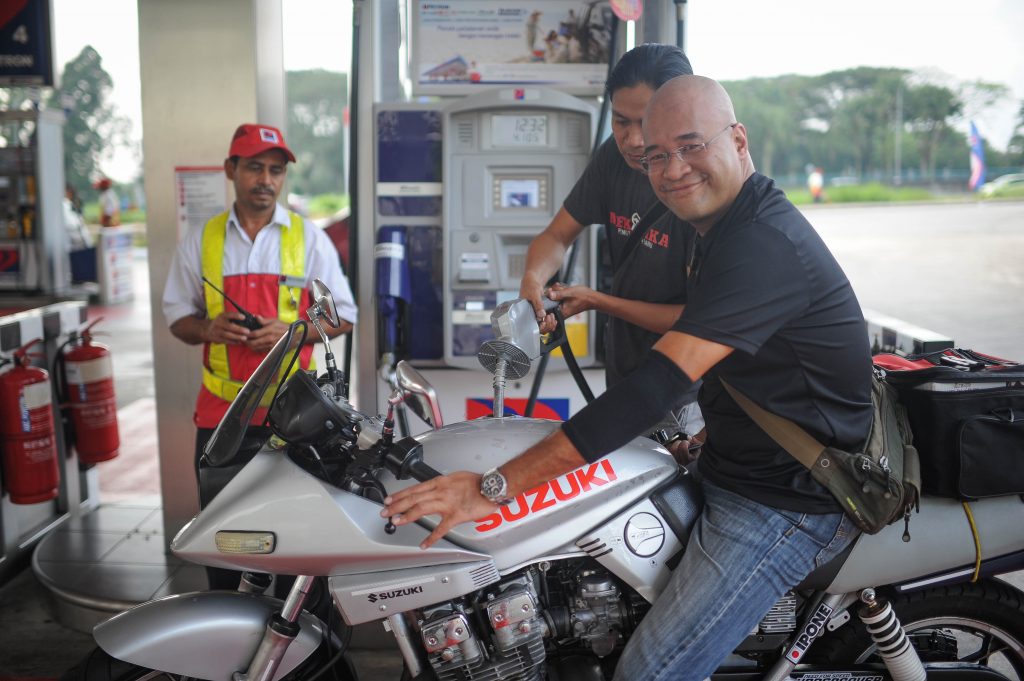 This formula sounds like your typical marketing lingo to lure you into believing that this fuel is better than the rest. But it is more than just marketing fluff, there is actually a scientific explanation to it. 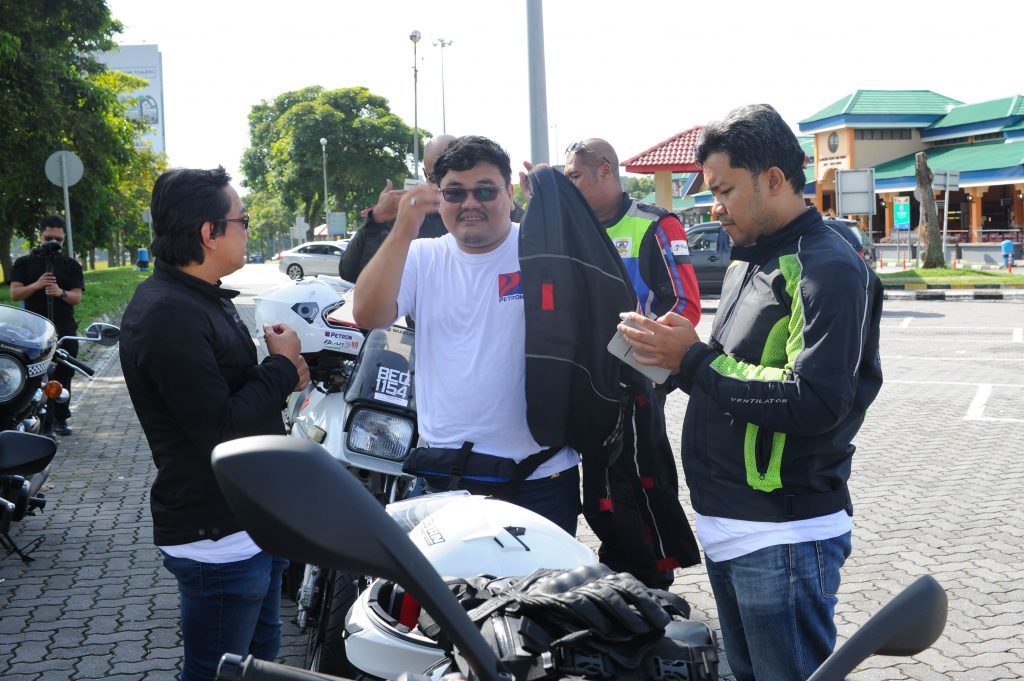 The formula promises “better power, better engine protection and better mileage” and it meets this promise by using a molecular detergent that cleans and keeps clean a dirty engine. Don’t mistake this for the detergent that you use to clean your clothes though, it is actually a molecule that keeps your fuel line clean so petrol can flow smoothly and uninterrupted. However it does not clean the internals of your engine like a good lubricant does, it simply smoothens out the fuel line so fuel flows without any particles slowing it down. 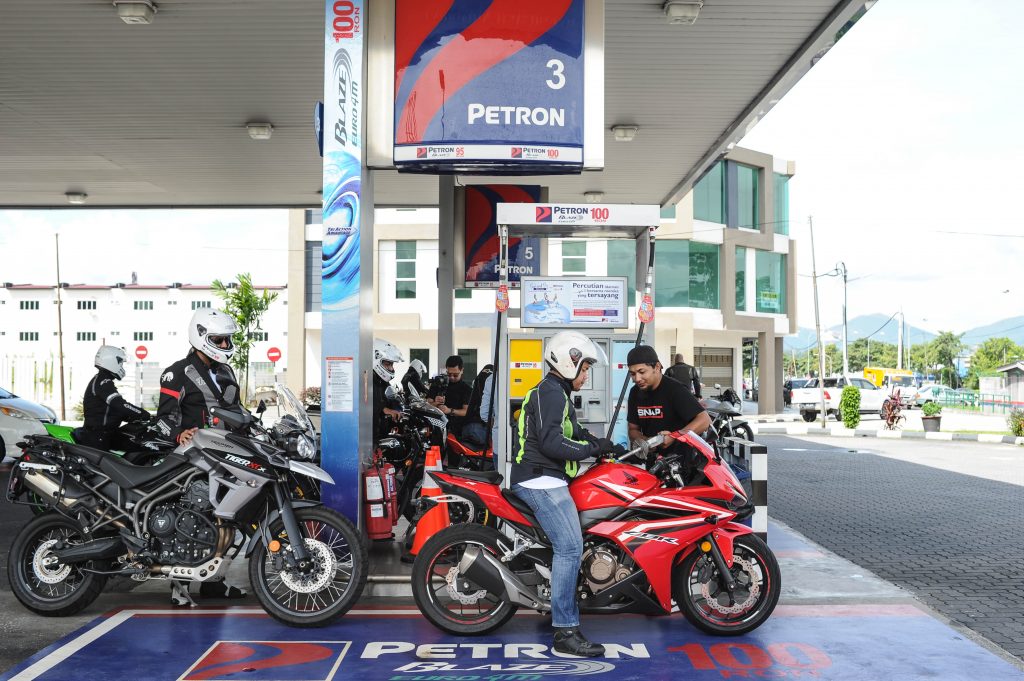 Then there is a “Friction Modifier” that reduces friction inside the piston chamber to ensure that the pistons work as they should without any particles slowing them down. And finally there is the “Combustion Enhancer”, this is the part that gives you power because it basically ensures that every molecule of fuel in the piston chamber is burnt in its entirety so that there is no wastage. And when a fuel is more combustible, the burst of energy it creates will in turn work the piston harder, and give you more power. 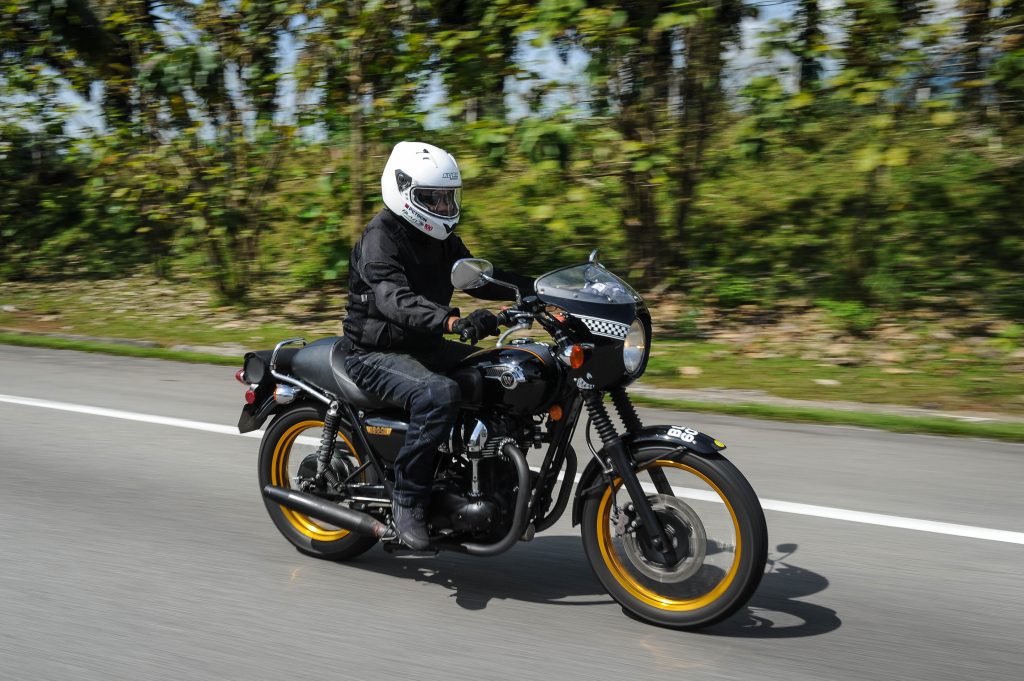 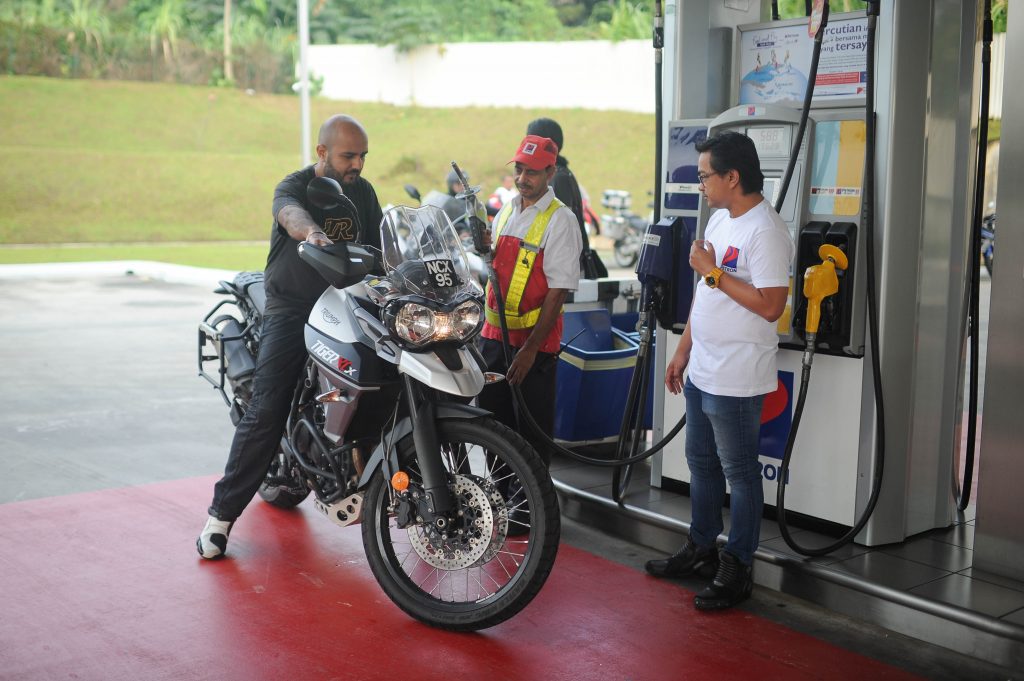 But did I feel the difference as soon as I got on the bike? Nope.

We filled up our tanks about six times throughout the journey to Penang and back. And though it was a requirement to ride according to the speed limit, well, I’ll just let you assume the best of us. 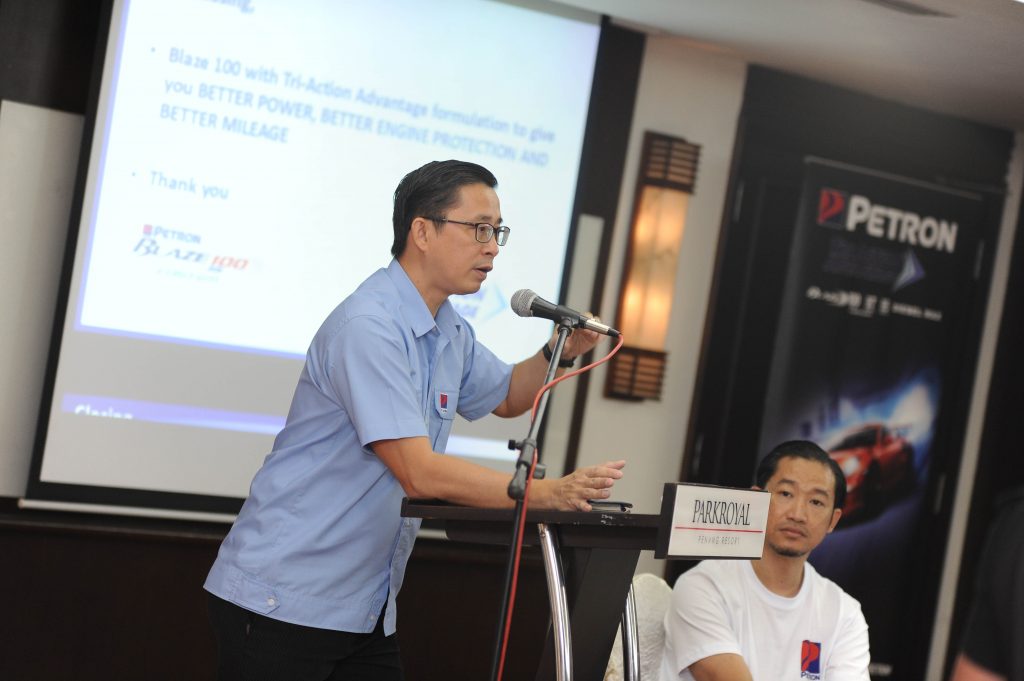 But according to the technical briefing during dinner later at night, a biker will need to fill up his tank up to eight times (!) before truly feeling the awesomeness of the RON 100 fuel. That is because the old fuel will need to be flushed out of the system, and it takes time for the micro particles to settle into the engine to truly make a difference. So filling up eight times before a difference is truly felt is a safe figure. 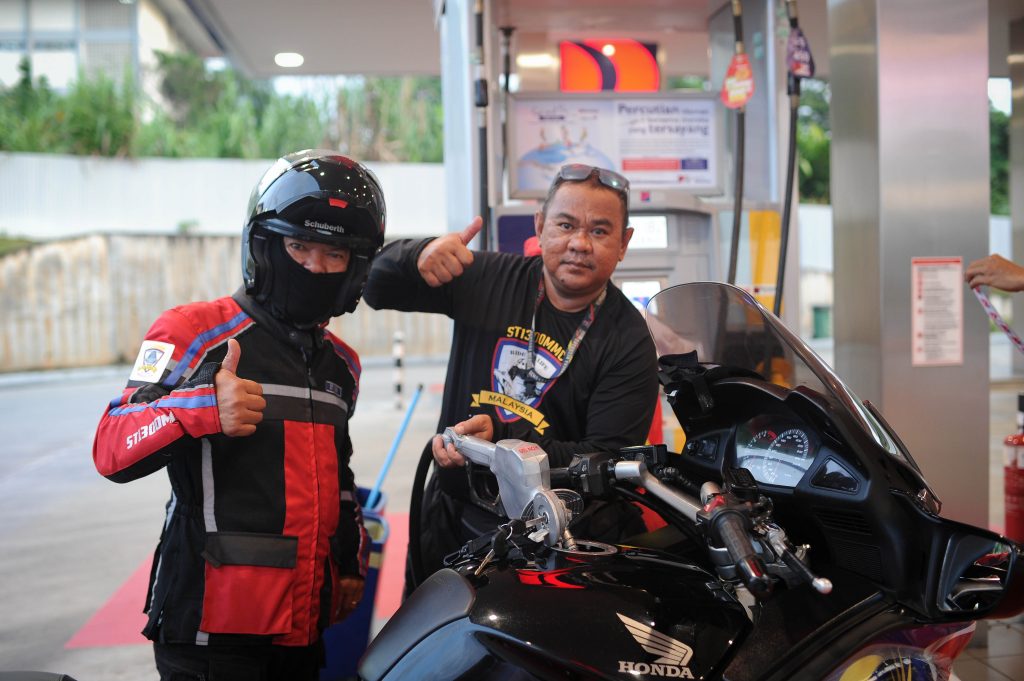 However, I will admit to something – that the bike felt lighter, more willing to rev, more ‘torquey’, and to sum it all up, more powerful on the return leg. 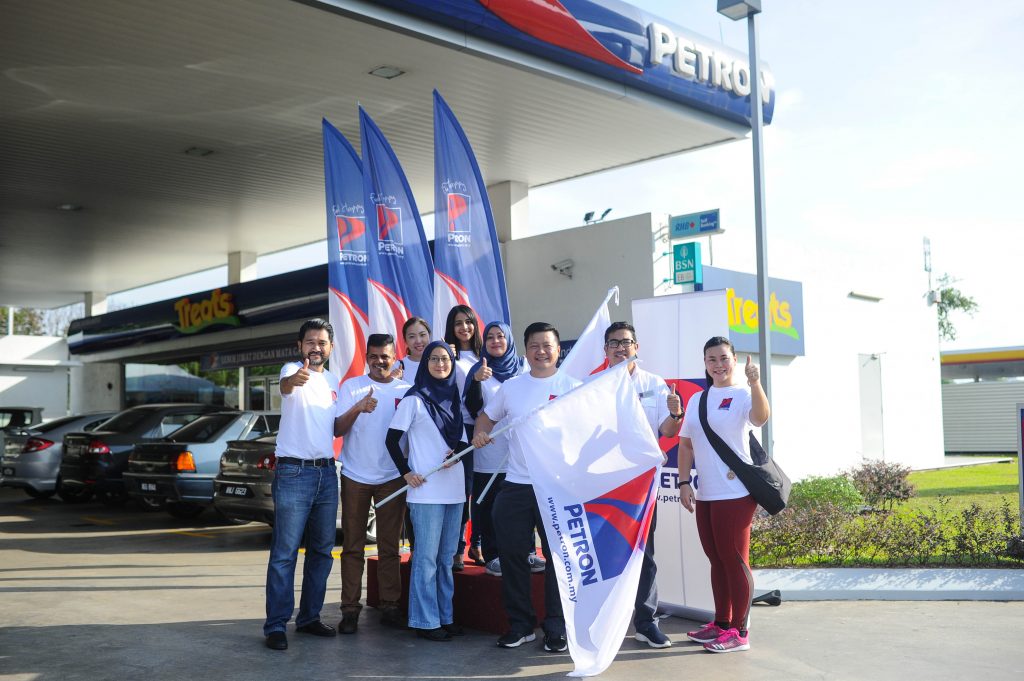 Of course some will say that “feel” is subjective and others may or may not feel the same, but in all honesty the bike felt more eager to accelerate. And there were instances where idiotic bus drivers would suddenly barge into the fast lane without signalling, seemingly unaware of the motorcyclist fast approaching. Well, hard braking is usually accompanied by quick downshifting and accelerating out of the danger zone (and maybe a choice finger for the bus driver, maybe) but shifting from sixth to fifth instead of fourth did the trick this time, and the bike seemed quite happy to lay down power. 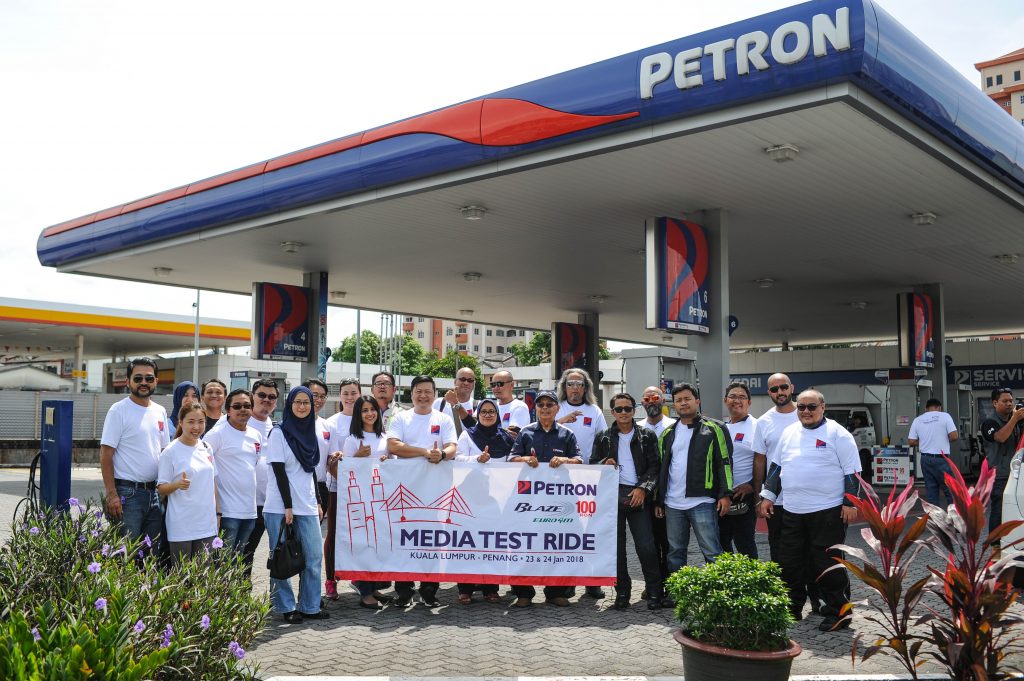 Simply put, there is no denying that the higher the RON of a particular fuel, the more combustible it is and ultimately more powerful. Petron’s RON 100 is currently the most powerful fuel in Malaysia, even more so than Shell’s V-Power Racing which is said to be RON 98. But it is also the most expensive at RM3 a litre. But for superbikes and their regular tank size, the price to pay for such impressive fuel is, well, negligible. Try it but don’t expect to feel the difference right away!