Everything from the dimensions, brake, and suspensions are identical to the 390 Duke. 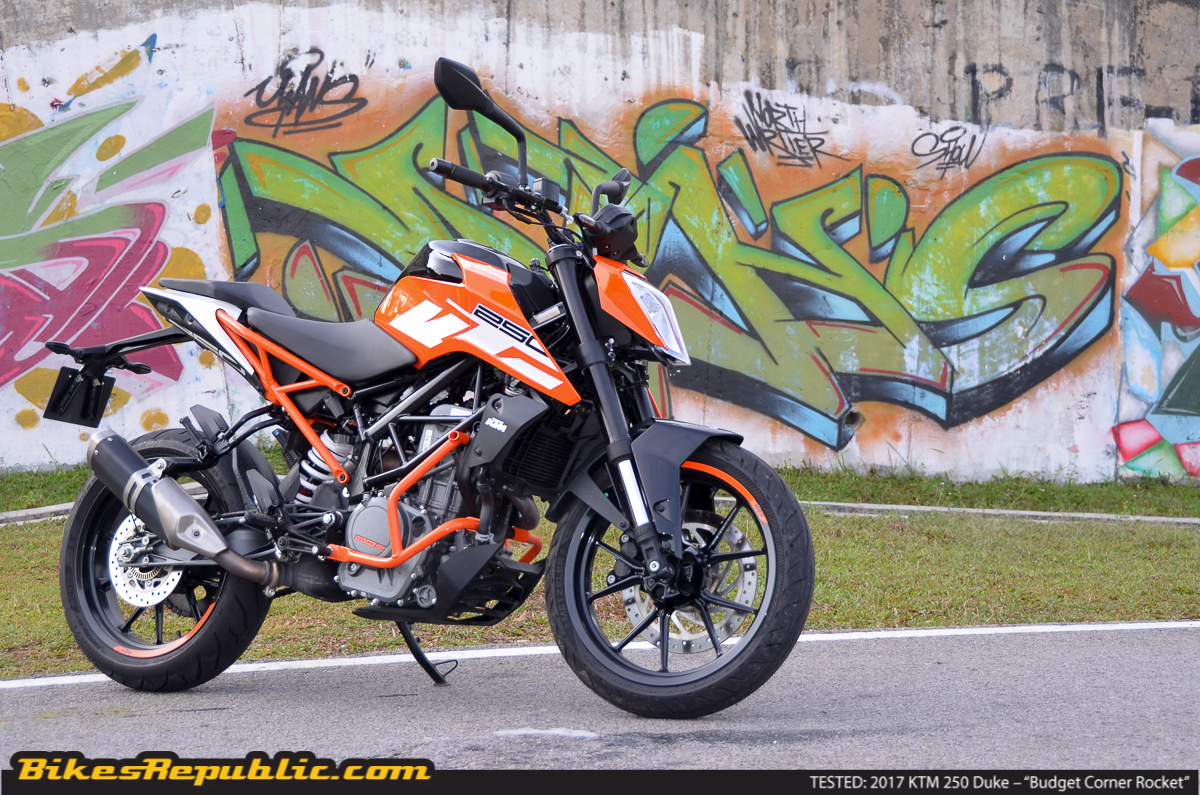 The KTM 250 Duke has been quite an icon amongst the current young generation (and even the young at heart) who are looking for that next level motorcycle after the normal everyday cubs or ‘kapcai’. With its edgy and aggressive design paired with an engine capacity that does not require riders to obtain the full B licence, the KTM 250 Duke seems to be a very good choice. 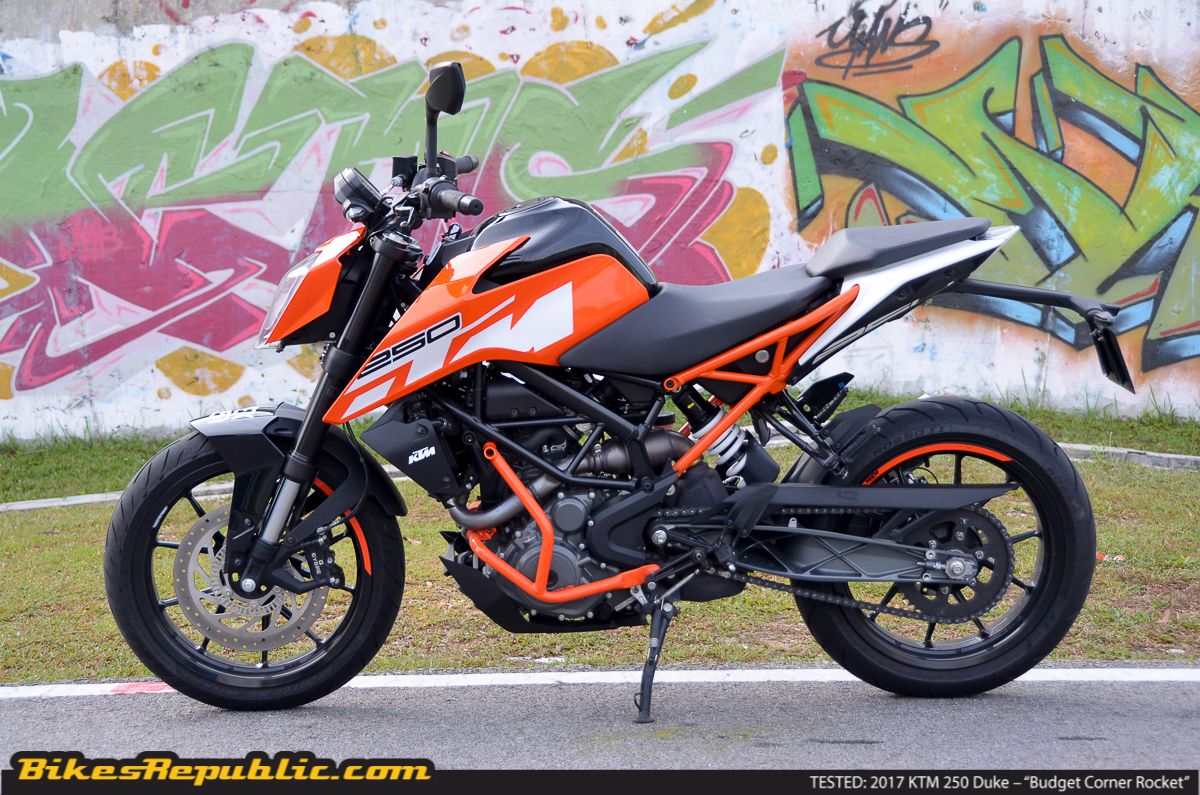 Last September, the Malaysian market was introduced to a brand new 2017 KTM 250 Duke where the manufacturer took the previous generation and evolved it in every single possible way. Together with its bigger sibling, the 2017 KTM 390 Duke, they were indeed as good as they look (and pretty comfortable too especially the seat).

We’ve tested the new 390 Duke a while back and it was honestly one of the most fun bikes we’ve ever tried. Injected with the latest technology like TFT screen, KTM MY RIDE, Ride-by-Wire, and Supermoto Mode, getting this baby sideways or even one wheel up in the air are as easy as ABC. You can check out our review in the link, below.

So we were slightly sceptical when we were given the opportunity to test out the 2017 KTM 250 Duke. After a week of constant riding, we were able to determine that the 250cc machine does have a few setbacks but nonetheless, also very fun to ride. 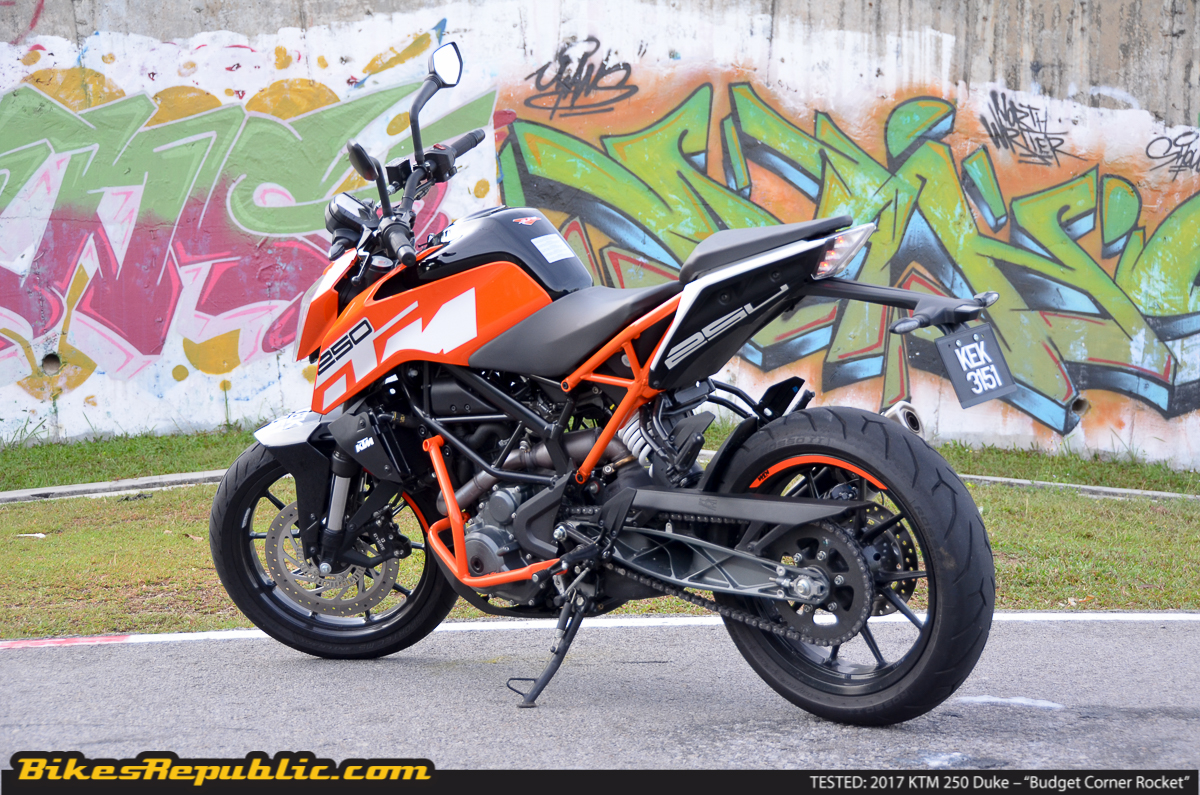 Based on the looks and dimensions, the 250 Duke is not that different from the 390 apart from its front headlights. While the 390 Duke comes with all LED lights, the 250 Duke is fitted with a halogen variant but the shape still carries the same DNA as its bigger and more powerful brother, the KTM 1290 Super Duke R. 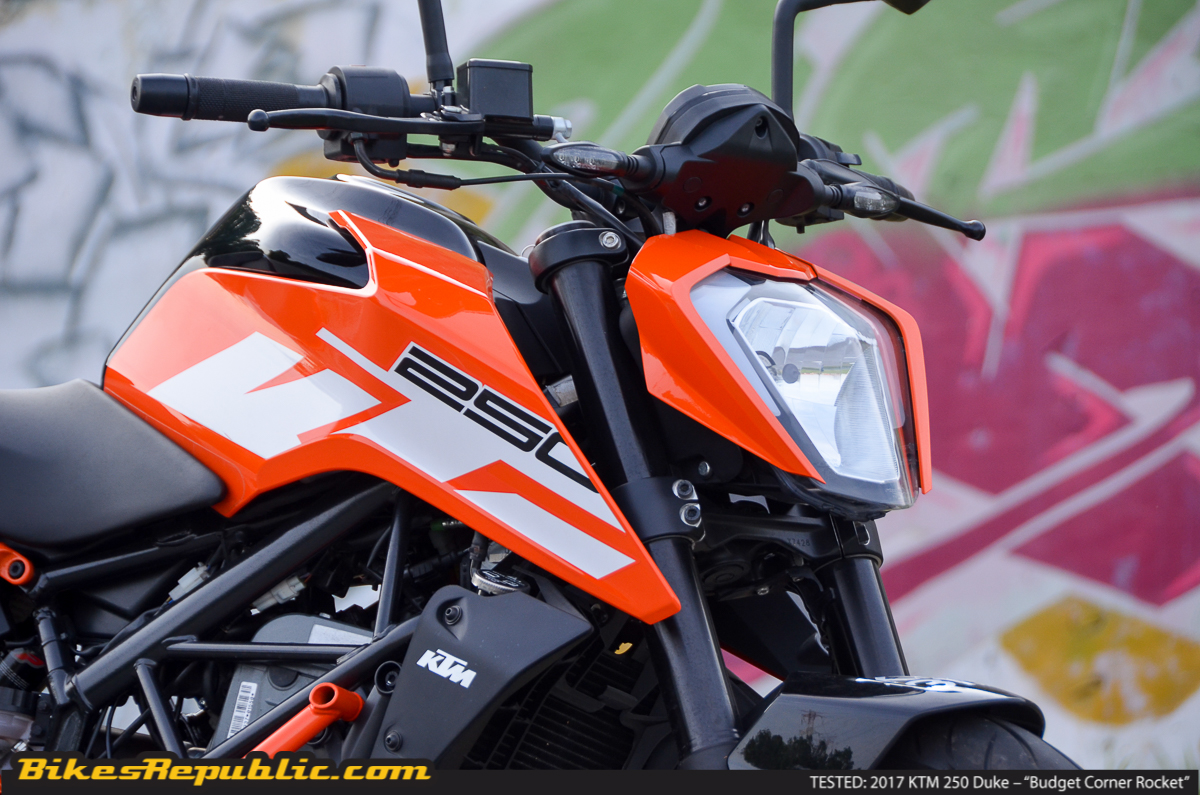 Everything from the ride height, WP suspension package and ByBre brakes are similar to the 390 Duke which means one thing; the 250 Duke handles just as good. This also means that the 250 Duke is also a legitimate ‘corner rocket’ and weekend rides up to Genting or Bukit Tinggi are just as exhilarating. 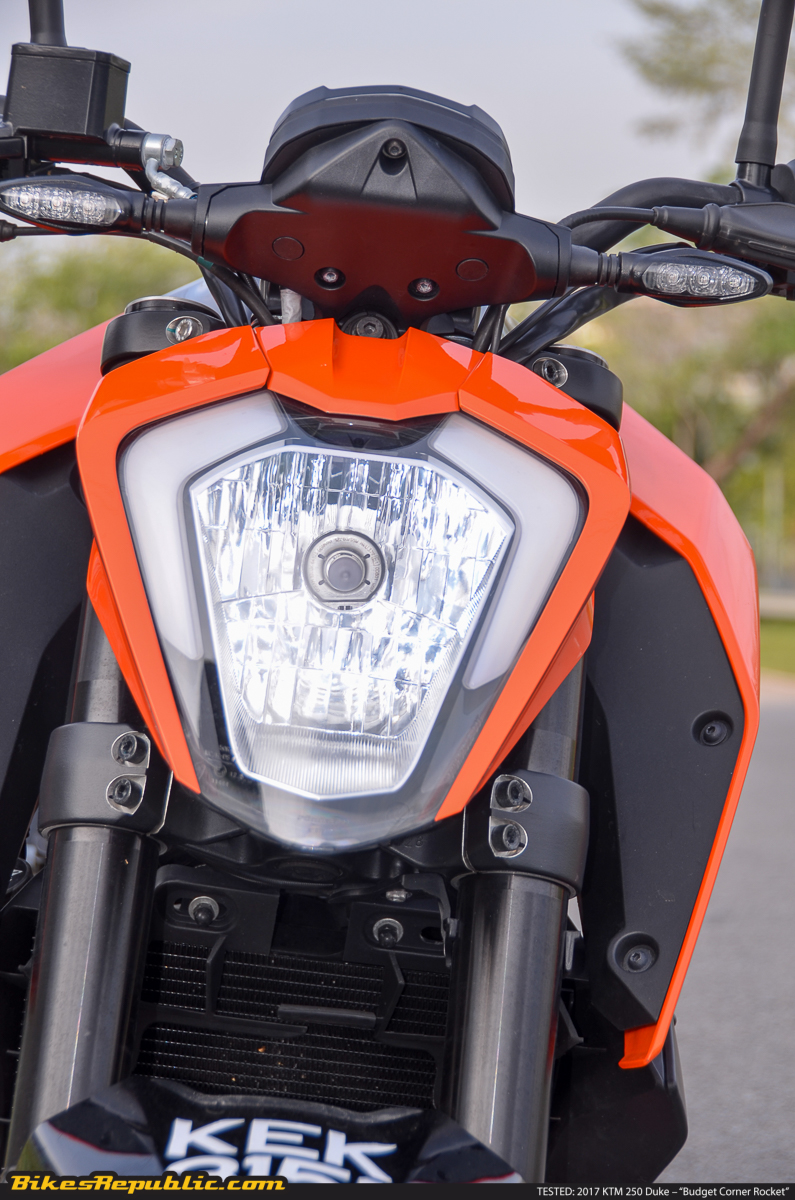 The 249cc single-cylinder engine offers a respectable 30hp which is actually a very competitive power figure compared to other bikes in the similar category. The 250 Duke is, however, one of the best when it comes to the power-to-weight ratio as it only 147kg (dry). 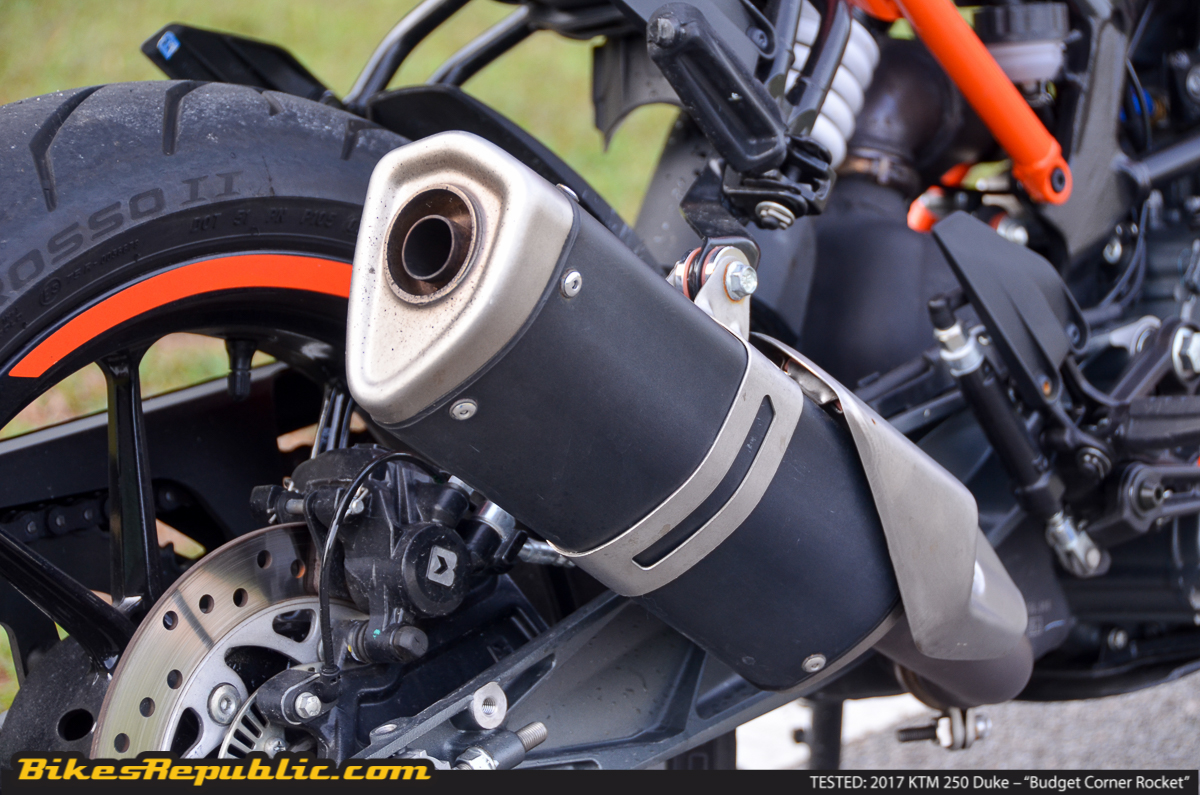 Power delivery when the throttle is wide open sends the bike up to highway speed in no time but there was one thing that fell under one of our pet peeves. While the 390 Duke comes with Ride-by-Wire technology, the cheaper 250 Duke is only fitted with the normal throttle system. Upon opening, there was a very significant lag when the bike is around the 3,000rpm range. 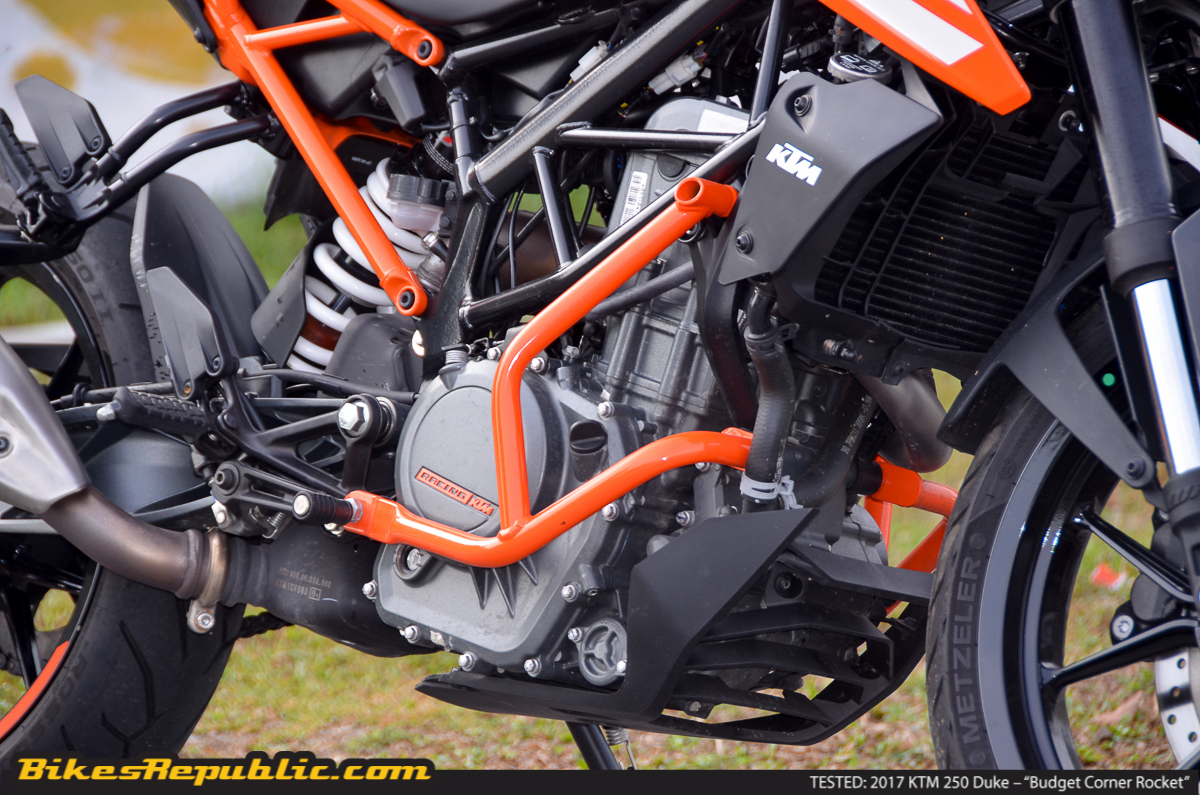 This quickly dissipates once above 4,000rpm so if you’re ever in situations where you need to take over a vehicle, drop down a gear (or more), give a short blip and progressively work the throttle to make yourself disappear. 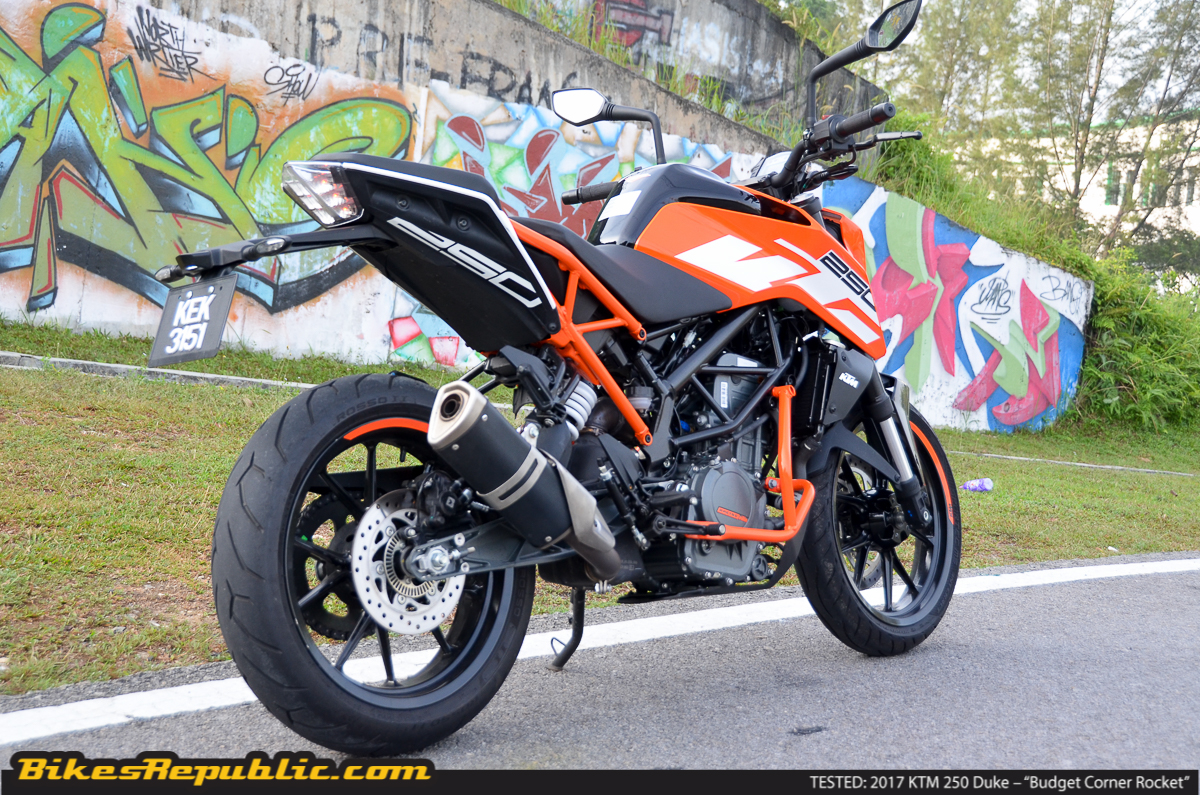 The top speed, on the other hand, is slightly below our expectations as we only managed around 145km/h but that’s probably due to this particular journalist who has gained a few extra kilograms in recent months. 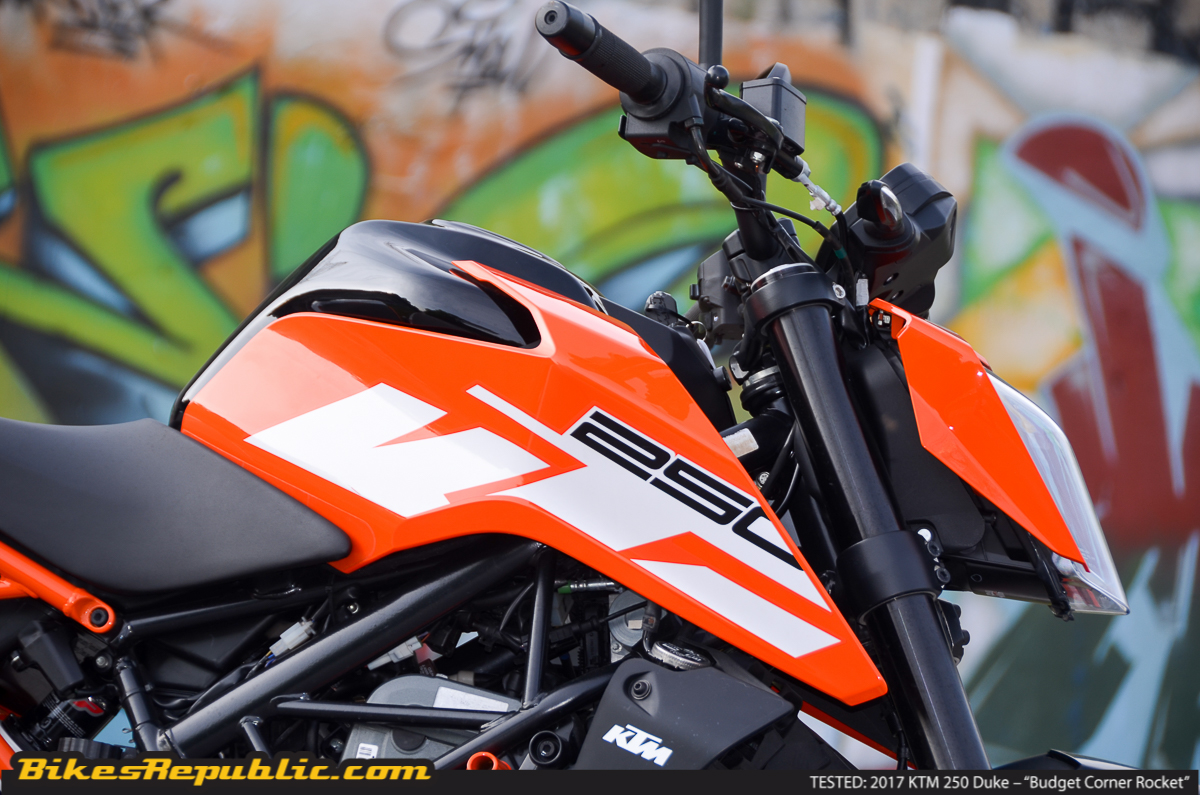 On the other hand, the 250 Duke fits in quite nicely for those who ride constantly in congested cities and busy highways. With a higher seat height, improved ergonomics and shorter wheelbase, the 2017 KTM 250 Duke is easy to manoeuvre and flick about even through traffic jams. 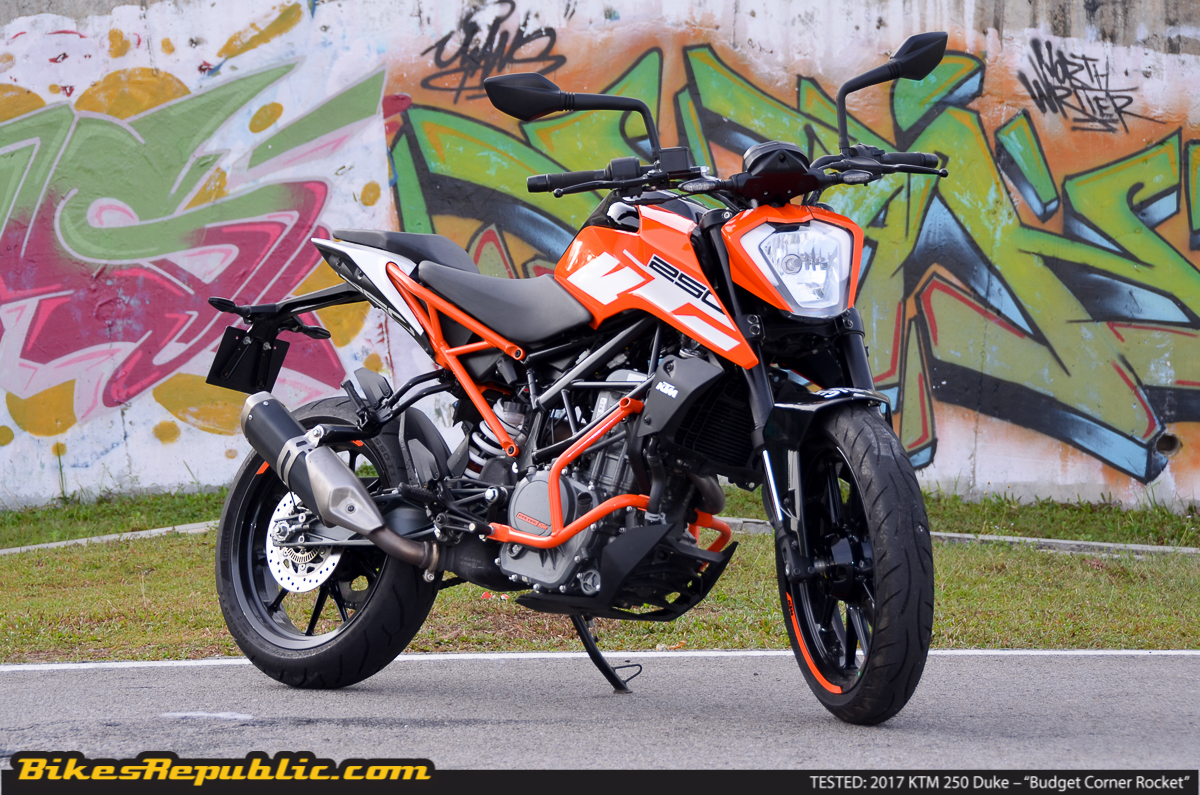 To conclude, the 250 Duke is just as capable as the 390 Duke apart from lack of power and electronics. With its aggressive looks and very capable 250cc power plant, those looking for a more affordable option may opt for this particular baby. KTM Malaysia has priced it at RM21,730 (basic price with GST) which is a whopping RM7,070 cheaper than the 390. 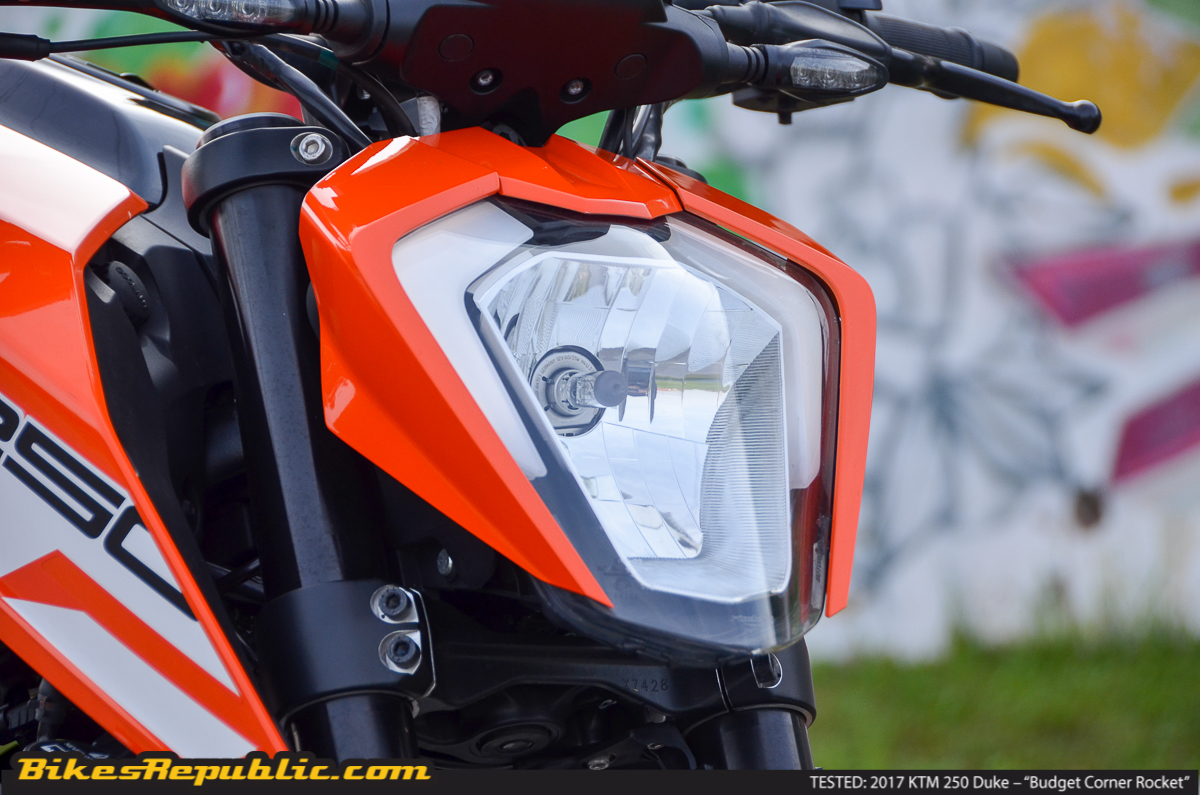 You can basically fill its 13.4-litre fuel tank with RM19 worth of fuel every single day for an entire year. There’s a fun fact for y’all to think about.