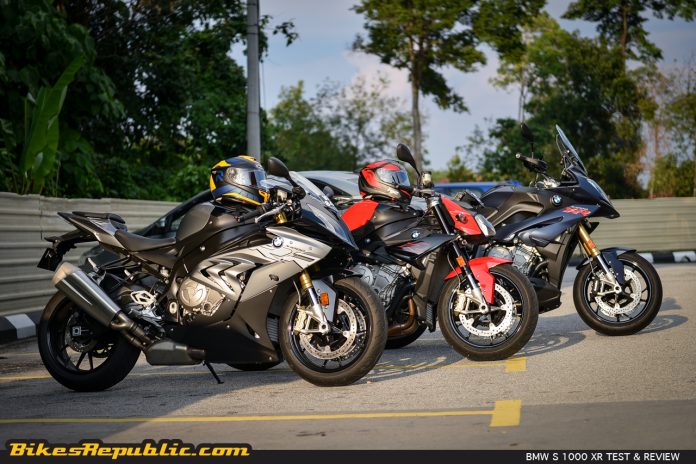 We’ve just completed a thorough testing of three BMW motorrad (motorcycles), all based on the S-Series inline-Four engine: S 1000 RR superbike, S 1000 R “roadster” (as BMW calls it, usually known as “naked” in the industry), and S 1000 XR sport-tourer.

All four carried out their roles superbly, of course. But before we roll out the video and full reviews, here’s a bit of filler about BMW motorcycles.

BMW Motorrad, just like their automotive division, had always been innovative in pushing out new technology for their motorcycles and most of these innovations found industry-wide implementation later on.

Here are Ten Innovations by BMW Motorrad, in chronological order.

BMW had begun in 1916, through the reorganization of Rapp Motorenwerke who produced aircraft engines in WWI. However, as the Luftwaffe (German air force) was banned in the Treaty of Versailles after WWI, the company produced industrial engines, air brakes, agricultural machinery, toolboxes and office furniture, instead, before turning to motorcycles and cars.

BMW then built a flat-twin (Boxer) in 1921 for motorcycles and were most notably used in Helios motorcycles. BMW then merged with the makers of Helios called Bayerische Flugzeugwerke in 1922, inheriting the Helios.

That led to the R32 in 1923. Unveiled at the Berlin Motor Show, it marked the beginning of BMW’s drive concept – air-cooled, twin-cylinder, four-stroke Boxer engine with a manual gearbox mated directly behind and a shaft final drive.

While the R32 didn’t break technological grounds, its engine served as the DNA for all Boxer-powered BMW motorcycles until today.

Sure, other motorcycles have had fairings mounted around their headlamps before the R90S, but it was BMW who used it on a volume production motorcycle. The R90S was designed by Hans Muth, the same guy who went on to design the Suzuki Katana, while the two-tone Daytona Orange paint commemorated the bike’s inaugural win at the Daytona International Speedway in 1976. (Please click here for our feature on Race Replica Motorcycles with the Best Paint Schemes.)

As with the R90S, full-fairings were the mainstay of racebikes up until when BMW featured it on the R100RS. It was also designed by Hans Muth, but with the aid of a windtunnel. The R100RS’s headlamp cowl, side panels and belly pan were rigidly mounted to the bike, and the handblebar turned independently, something we’ve grown accustomed to today.

As we’ve written before in the R nineT Urban G/S’s full review (please click on this link to read more), adventure motorcycles prior to the R 80 G/S were based on enduros. While they’re great for blasting down trails, they lacked the range, luggage carrying capacity and comfort for extended off-road rides and the road leading there. BMW saw this vacuum and released the R 80 G/S in 1980, which gave birth to the whole new adventure-touring segment.

Apart from that, the R 80 G/S was also the first mainstream motorcycle to be equipped with a single-sided swingarm.

Yes, the R 80 G/S, which stands for Gelande/Strasse (Off-road/Road) was the granddaddy of the best-selling GS.

ABS is compulsory on every new motorcycle in Europe now and it’s as indispensable as the brakes themselves. The first ever motorcycle ABS system was called ABS-1. It had that trademark pulsing at the levers when activated, scaring some riders who aren’t accustomed to its workings. The current 10th generation ABS has improved by leaps and bounds since then.

A drive shaft causes reactions that are peculiar to riders on chain or belt drive motorcycles. The tangential forces acting on the wheel hub causes the rear of the bike to jack up, instead of squatting under weight transfer during acceleration. BMW countered by installing an extra lever along the axis of the driveshaft, creating a parallelogram – hence the name Paralever. BMW engineers went on to further tune the Paralever to introduce some degree of squat associated with any vehicle when accelerating. The Paralever was also adopted to other shaft driven BMW motorcycles of different engine configurations, starting from the K1, also in 1988.

Along with the Paralever rear suspension, the Telelever has become a hallmark for BMW motorcycles. We’ve also written about the Telelever at length (please click here for the full article) and its functions. But of important note is how normal the Telelever front end feels to riders who have never experienced it.

The Hossack-style Duolever front end detaches braking and cornering loads from the handlebar, thus allowing the rider to keep the bike turning, besides the given comfort. While the concept didn’t find widespread adoption in the industry, there was an extraordinary maker who used it to great results – Britten.

It was reported that BMW Motorrad had contemplated using the Duolever for the S 1000 RR superbike.

First fitted to the K 1200 S, the Duolever equips the K 1600 tourers now. The set up gives the huge bikes superlight and agile handling (no kidding).

We had to split these two innovations although they made their debut on the same bike, as the ESA was an extra option for the K 1200 S. It’s now a standard feature on the R 1200 GS lineup.

Fitted with it, the K 1200 S was the world’s first production motorcycle to feature an electronically adjustable suspension. Just as how it works now, the rider could select the preload based on load and damping based on his preference.

It was ESA which paved the way for ESA II, Dynamic ESA and DDC (Dynamic Damping Control) found on BMW’s S 1000 range we had just tested.