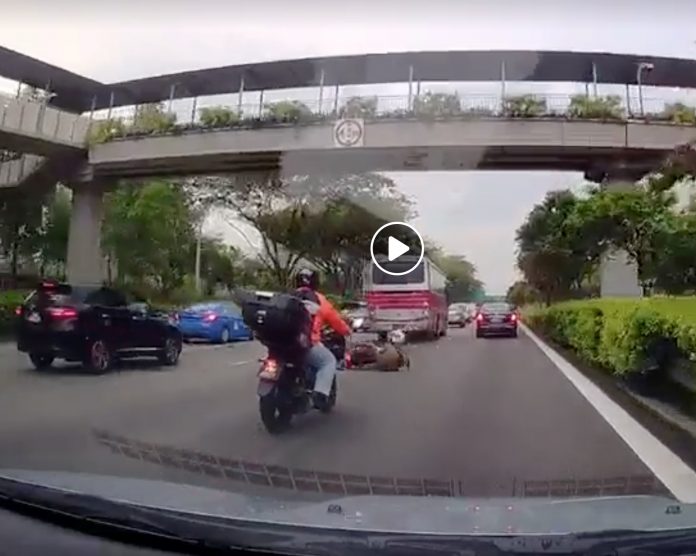 A Singaporean Facebook page shared a video of an accident involving two motorcycles this morning. But rather than just condemning the parties involved we could perhaps learn that target fixation and improper braking is dangerous for us motorcyclists.

We are not trying to be experts here either. But after years of practice and riding in the same situation at least three times per trip per day, one tends to learn.

Watch the video below:

First rider panicked as he was trying to slip between the bus and car. He grabbed his front brake with full power, resulting in the front tyre washing out.

What if he didn’t overtake?

How should we brake?

We know it’s easier than it sounds, but every motorcyclist should practice emergency braking. And we’re not talking about dragging the locked rear wheel like in JPJ tests!

Would ABS have helped?

It may but the first bike looked like a kapchai/scooter, hence it probably isn’t equipped with ABS. Even then, the best way is to ease up on the pressure at the lever to let the bike’s momentum stabilize itself. This can be helped through practice.

But what if there’s ABS?

The following rider saw the crashed bike ahead and applied his brakes a fraction later. Remember? A human’s nominal reaction time is 0.5 second. He kept braking but still ran into the poor man on the road.

What is target fixation?

What should have been his response?

What are the solutions to target fixation?

What are the solutions to braking hard and still being able to steer?

Every rider needs to be critical about his/her own riding skills and learn. It’s far better than relying on others to give way.

Oh, and look up videos or articles on riding tips. It’s time and energy well spent rather than be like keyboard warriors who only know how to criticize.