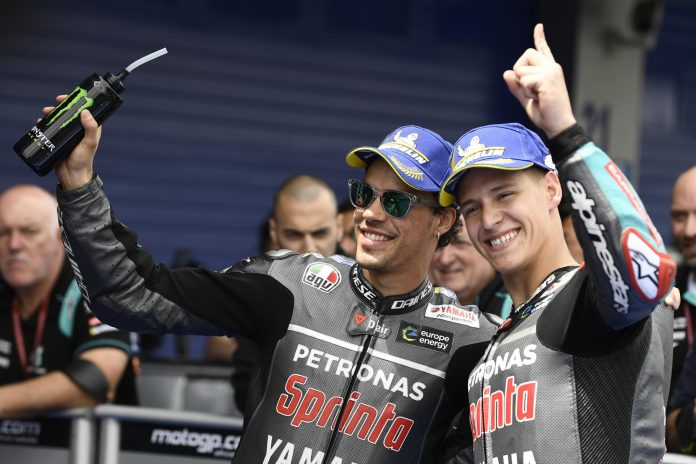 The results gave the fledgling team much to cheer about in just their fourth race. Both riders had been strong through the practice sessions, with Quartararo setting the leading pace.

In doing so, it was the first pole position in MotoGP for the youngster. Additionally, it reset the records as the youngest rider to achieve the feat, which was formerly held by Marc Marquez.ni

Speaking to MotoGP.com, Quartararo said that he had improved his braking from being his weakest point to his strongest.

The Petronas Yamaha SRT team is using the same 2019 Yamaha YZR-M1 as the Monster Energy Yamaha factory team, but they are the B-spec bikes with lower rev limits.

Andrea Doviziso (Mission Winnow Ducati) did well to qualify in 4th with a time of 1:37.018s despite the Ducati Desmosedici’s traditional dislike of the Jerez Circuit’s layout.

Maverick Viñalez (Monster Energy Yamaha) had struggled throughout the first three practice sessions but managed to qualify 5th. The M1 still displaying a sensitivity to changing conditions. Qualifying was carried in cooler temperatures which benefitted the tyres.

The first 16 riders qualified faster than the previous year’s lap record, showing how far MotoGP progresses by the year.