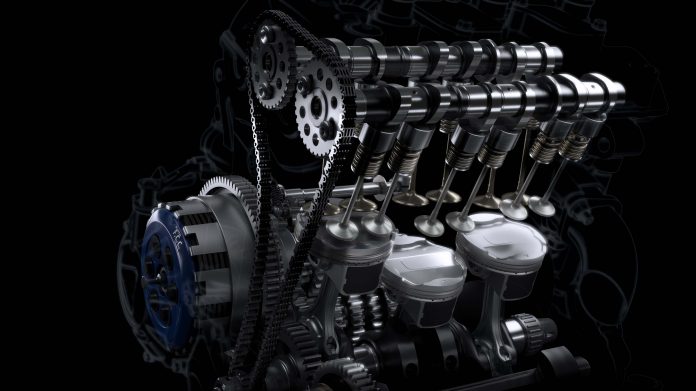 The terms SOHC and DOHC are usually seen on spec sheets. Some car owners even stick large “DOHC” vinyl on their vehicles. 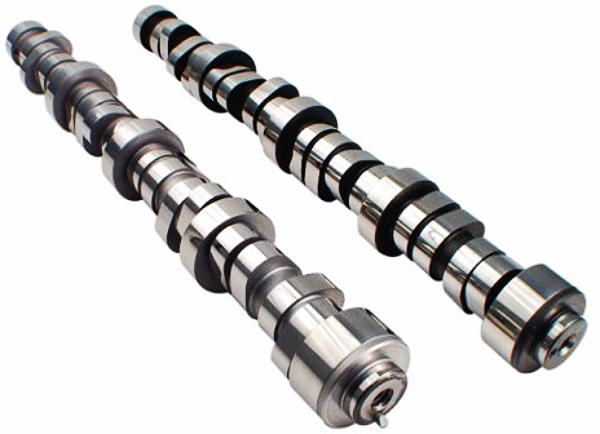 But before we go further, let’s understand the function of a camshaft.

Camshafts are cylindrical shafts that carry oblong-shaped cam lobes in four-stroke engines. The lobes push on the poppet valves to open them in time with the engine’s intake and exhaust strokes. The valves are then closed by the valve springs when the taller cam lobes turn away. (NOTE: Desmodromic valve actuation don’t have return springs on the valves.)

The camshaft’s rotation is driven off the engine’s crankshaft via a chain, belt or gears. Road motorcycle engines usually employ the chain which is kept inside the engine block as it’s lubricated by the engine oil and quiet. Certain Ducati models still employ the belt cam drive (also called timing belt like in cars). Gear driven cams are usually used in racing motorcycles for their exactness in executing their timing, reliability in a high stress environment and being too loud for road bikes.

What are SOHC and DOHC? 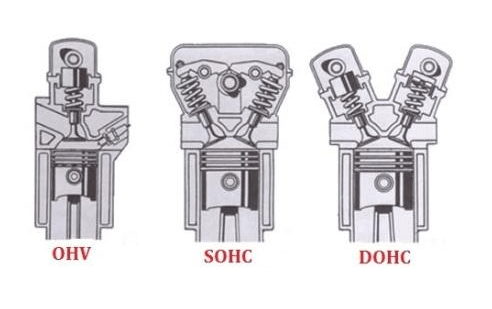 As the names suggest, an SOHC engine is served by a single camshaft which carries the intake and exhaust cam lobes. A DOHC engine, on the other hand, has one camshaft dedicated to intake and one for exhaust.

Pros and Cons of SOHC

Since one camshaft carries all the lobes for intake and exhaust. However, do remember that the combustion chamber is round thus valve placement will be compromised. The best valve configuration keeps the valves closer together, but having four valves per cylinder with from one camshaft would mean spacing any two valves much further apart.

As such, an SOHC engine usually carries a maximum of three valves per cylinder (although there are four-valves-per-cylinder SOHC engines), but is usually limited to two valves.

An SOHC setup is much simpler and lighter as there are fewer parts. However, spark plug placement is compromised as the space directly on top of the combustion chamber has already been taken up by the valves. Therefore, the spark plug needs to be placed at the side of the combustion chamber. This puts a limit on high RPMs as the flame front could only reach so far before the piston moves down and the expanding gas losses its pressure. At higher RPMs, the piston is moving so fast that some of the air-fuel mixture isn’t fully burned and kicked out. Consequently, an SOHC engine could not produce higher horsepower due to lower engine revs.

As such, an SOHC engine is usually tuned for low-RPM and midrange torque.

Pros and Cons of DOHC

The intake and exhaust camshafts are placed further apart. All the valves could be kept closer together as the cam lobes can be placed closer to each other. It also means that the camshafts can be made shorter for a more compact engine block.

Since the two camshafts are spaced further apart, the spark plug can be placed between them and directly in the centre of the combustion chamber. As opposed to placing it at the side, a centrally located plug has the better chance of burning most if not all of the air-fuel mixture.

Consequently, DOHC engines can be revved higher and produce more horsepower in the process.

The two camshafts also give engineers more flexibility in spacing them to angle the valves for optimum combustion chamber shape, besides intake- and exhaust-tract designs.

The cons of a DOHC engine include higher maintenance as there are more parts involved.

There are also OHV (overhead valve) engines where the valves are on top of the combustion chamber, but the cams reside in the crankcase. The cam lobes push on thin cylindrical shafts called pushrods which in turn push on a rocker arms that actuate the valves.

This type of setup is usually used on low-revving engines due to the inertia of many moving parts. Also, it’s difficult to have more than one valve each for intake and exhaust, unless more cams are installed on the other side of the engine.

Therefore, the OHV setup usually resides in cruisers such as Harley-Davidsons and Indian Motorcycles.