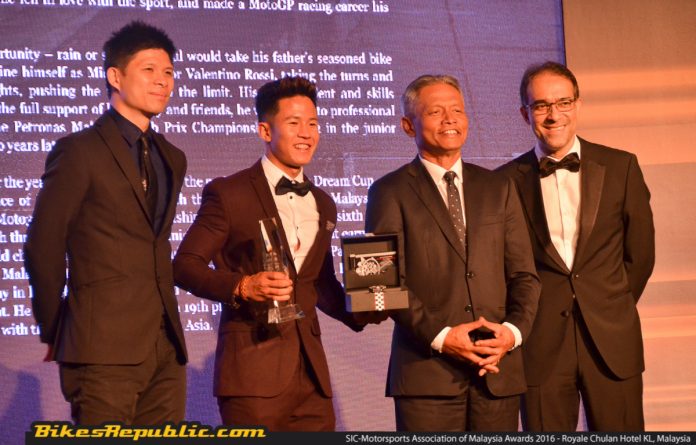 Khairul Idham Pawi celebrated his latest achievement last evening when he received the SIC-MAM Award for ‘Best Rider of the Year’ for 2016. He was awarded with the honour for his amazing achievements as the first Malaysian to win not one but two races in MotoGP™ in the Moto3™ category back in 2016. The award for ‘Best Driver of the Year’ for four wheels went to Jazeman Jaafar.

There were a total of eight awards given out yesterday to recognise the people in motorsports including the drivers, riders, teams and even journalists who form the backbone of the motorsports industry not just in the local scene but on the international level as well. These recognitions and awards were given out for efforts made by individuals and teams for both two and four wheels.

The awards for ‘Best Team of the Year’ went to Project X Racing (two wheels) and Sakura Tedco Racing (four wheels). The Project X Racing has gained a lot of attention through their massive achievements especially at the Malaysia Superbike Championship. They have worked with the likes of Hafizh Syahrin in the national races and have been a dominant force ever since its inception.

The SIC National Championship Award was given out to Malaysia’s “Prince of Drift”, Tengku Djan Ley Tengku Mahaleel. Tengku Djan has been a very important figure in all sorts of motoring events including Formula Drift, D1 Championship, Merdeka Millennium Endurance Race and the Saga Cup not just as the driver but also as the team developer.

SIC also made an award where the public get to vote for their favourite motorsports hero in the Malaysia Motorsports People’s Choice Award. The receiver of this award with the highest number of votes was none other than our very own national Moto2™ rider, Hafizh Syahrin Abdullah. He has been very competitive last season including a few fights for podium finishes. For 2017, he will ride faster than ever to achieve motoring glory together with Khairul Idham Pawi who has graduated from Moto3 and move up to Moto2.

Last night was also where the first group of individuals were inducted into the Malaysian Motorsports Hall of Fame for their outstanding achievements in the national and international motoring industry. The first nine people to be inducted are: