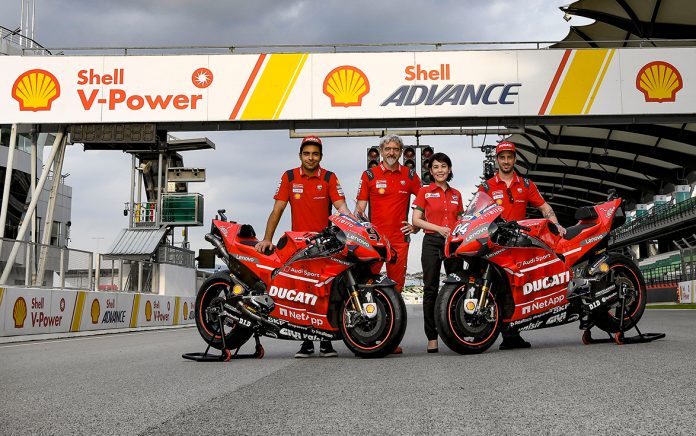 Shell and Ducati are two brands symbiotic with each other.

Time flies and it’s been 21 years of collaboration between the petroleum giant and maker of exotic motorcycles. To celebrate that union, Shell and Ducati announced the renewal of their technical partnership, on the eve of the 2019 Shell Malaysia Motorcycle Grand Prix.

The partnership began in 1999 during Ducati’s age of dominance in the World Superbike Championship. Since then, they have celebrated championship titles together. Shell followed Ducati when the manufacturer ventured into MotoGP in 2003.

Back on the track, the awesomely powerful (the most powerful MotoGP bike, in fact) Desmosedici GP uses Shell Advance engine oil. Shell then introduced the new Shell Advance with PurePlus Technology to the bikes four years ago.

MotoGP organisers limit fewer and fewer engines year after year, in an effort to cut down on spending to encourage more teams to join. The effect of this ruling is that manufacturers must make their engines more reliable. Using more engines than the allocated units will result in penalties, which no team regardless of position needs.

Releasing the full potential of the fierce Desmosedici GP’s engine is one thing, but the engine oil must also play an essential and critical role of ensuring reliability. How many times have we seen Ducati MotoGP bikes break down due to engine trouble? Virtually none.

The partnership has secured more than 200 wins in both WorldSBK and MotoGP and they will continue to win more.