The weather has been mighty unpredictable in the Klang Valley lately. The days invariably start with burning white sunlight and scorching heat, only to give way to sudden heavy downpours. If the downpours continue for more than two hours, we could find ourselves  caught in flash floods.

While it’s safest to sit out from riding in pouring rain and flooded roads, there’s no escaping it at times, especially around flood-prone areas where the roads remain flooded even after rain has stopped.

Here are our tips for riding through flash floods (and deep puddles of water).

It’s just like adventure riding. No sane adventure rider will just banzai headlong into an unknown body of water without first inspecting its depth, potential hazards underwater and exit on the other side. 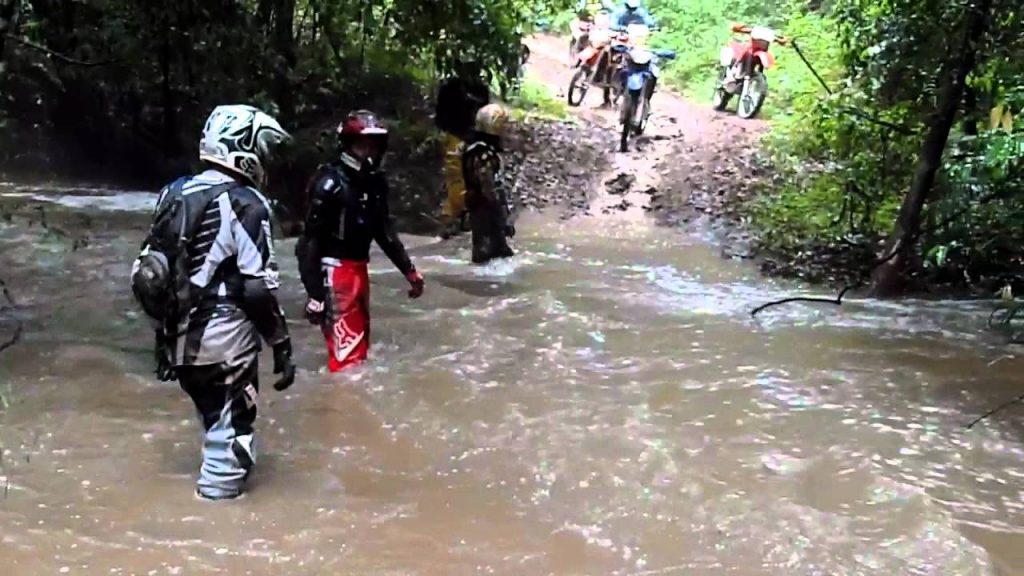 While you may not have to get off your bike and walk through floods on the road you travel on each day, you do need to stop and look for clues. If there’s another vehicle pushing through the water, note how deep it is. Observe if there’s a strong water current from one side of the road to the other.

If the water’s too deep or current’s too strong, forget it. Just wait for it to subside.

If you don’t already know the location of your engine’s air intake, now’s the good time to start. Check if it’s high enough above the water.

Riding through floods is no different from riding through a river when adventure or trail riding, so stand for better low-speed stability, meaning there’s more control when you crawl ahead at 10 to 20 km/h.

This goes without saying.

Throwing up a big splash may look spectacular in pictures but it isn’t a good practice in real world situations. Hitting a deep body of water at speed would most likely have the water act as a liquid brake/barrier. The bike will cut through the first few metres easily before coming to a sudden halt and causing the rider to lose control (or even thrown off).

Keep your speed as low as possible and steady to keep the water’s bow wake below the height of the engine’s air intake. Remember, you’re riding a motorcycle, not a jetski.

It’s also best to stay off the sides of the road and ride in the middle of the lane.

Don’t pull in the clutch or slam the throttle shut.

Maintain a steady throttle and speed in the gear you are in right now, even if you should feel a tyre or tyres kicking loose when contacting something in the water. In fact, you should open the throttle a bit more if that happens.

Roll off the throttle smoothly if you need to slow down more and stay off the brakes.

Don’t gun it immediately after exiting the flood. You may increase your speed, but don’t slam open the throttle, without first giving the time for the water or whatever debris collected on the bike to “drop off.”

Also, with the bike still moving, drag the brakes lightly to clean them.

But what if you hit, for example, a pothole and the bike goes down?

Make the effort to kill the engine before you lay the bike down into the water. You’d most probability have the time to do so, since you were riding at a slow speed, right? Right? Regardless, the engine should be shut down as quickly as possible.

An internal combustion engine is basically an air pump which sucks in air, adds fuel to it, compresses the mixture and sets it alight. But water is incompressible and non-combustible (duh!), and therefore has the potential of causing catastrophic engine damage.

Do not immediately attempt to start a motorcycle that has been lying underwater. Instead, you should pull out the spark plugs and the airbox cover to check for water ingress. If the spark plug electrodes are wet, do not reinstall them, but turn on the bike’s ignition and crank the starter a few times to push the water out of the combustion chamber.

Reinstall only when it’s sufficiently dry.

Riding through a flood isn’t difficult but one should do it with care and logic, obviously. Sticking to the above steps will have you home way ahead of car drivers, instead of ending up swimming in that filthy water. Think of it as urban adventure riding.