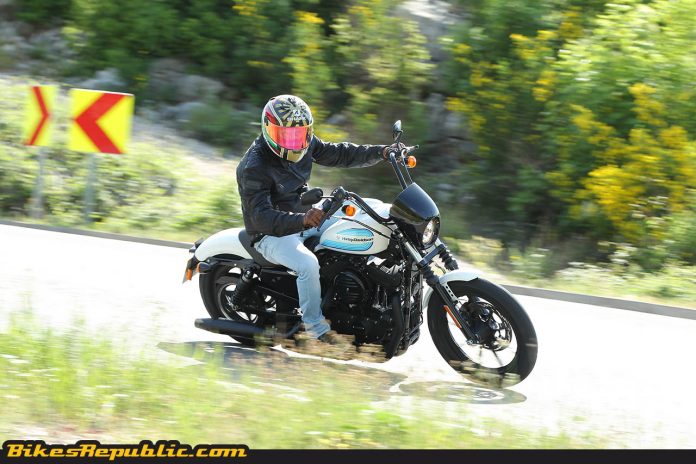 The Harley-Davidson Sportster is the oldest continuously produced motorcycle. It has been in production since 1957, and though a lot has changed, park new and original together and you will still be able to pick out some similarities through 60 years of evolution. 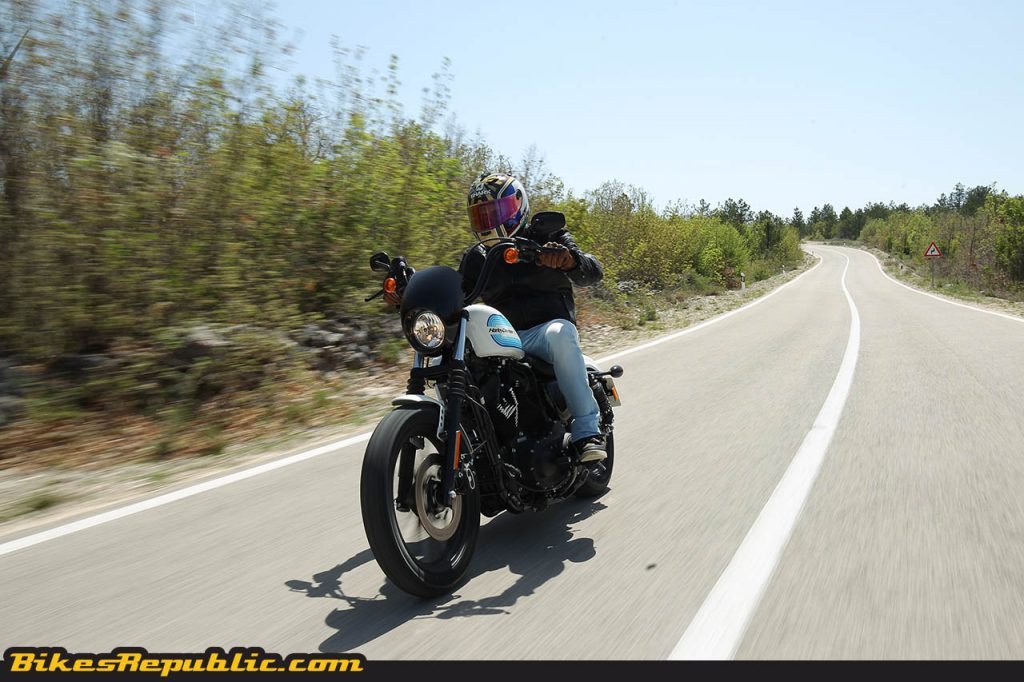 This is something the geeks in product development call ‘product continuation’, it is the retention of the DNA of a particular model so it can develop and evolve but yet stay true to the original. Sometimes in design, sometimes in purpose.

But the Sportster is special because it is one of the few motorcycles that is perfectly adaptable to being multiple versions of the same bike. 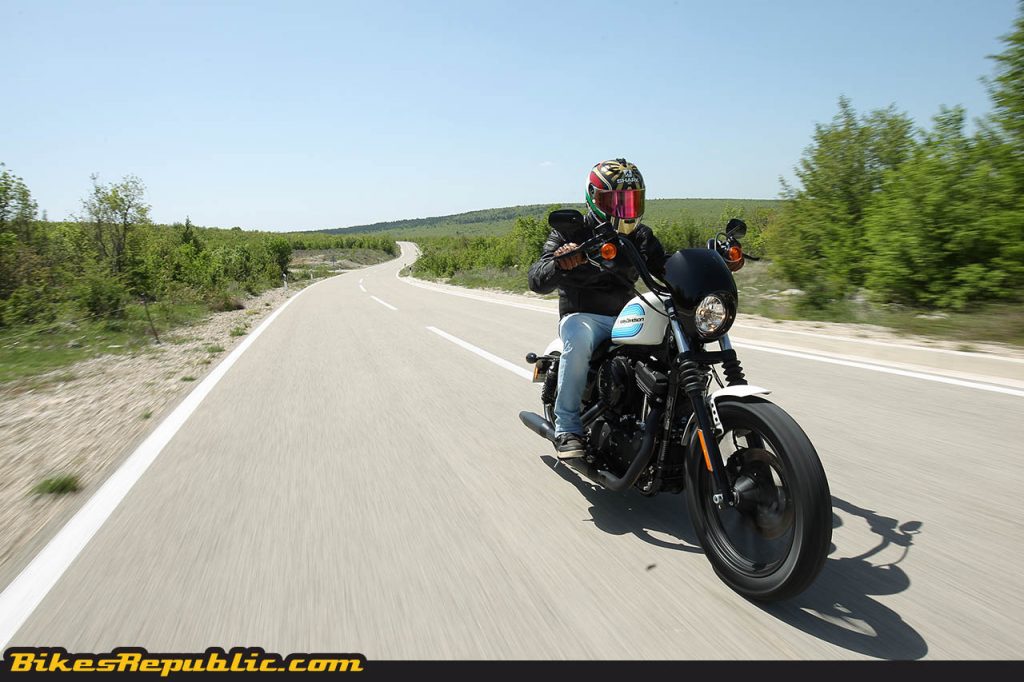 And that is what has made it immensely successful, because it can be a bike to ride up to the mountains or go touring with. It has spawned variants that were absolutely devilish in corners yet perfectly friendly for newbies to get started with.

The popularity of the Sportster grew at about the same time as the Triumph Bonneville’s, the Norton’s and the Enfield’s. The rise of today’s modern retro machine is considered to be a revival of this era, and the Sportster Iron 1200 is the perfect salute with its classic styling. 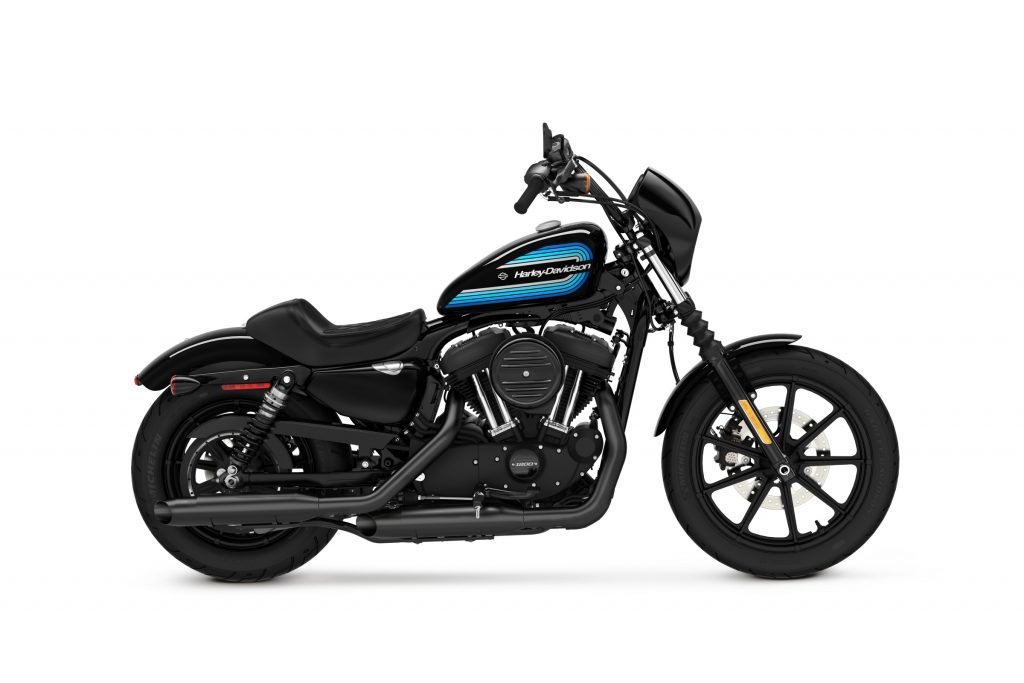 Fast and stylish with radical chopper styling, the Sportster Iron 1200 we rode in Croatia is everything Harley-Davidsons were meant to be from the start, fast and stylish.

To the uninitiated, the Iron 1200 may look just like an Iron 883 with taller mini-ape handle bars instead of the usual flat-bend handle bars on the regular Iron. But the Iron 1200 is not just the same motorcycle with a bigger engine, it is very much its own motorcycle. 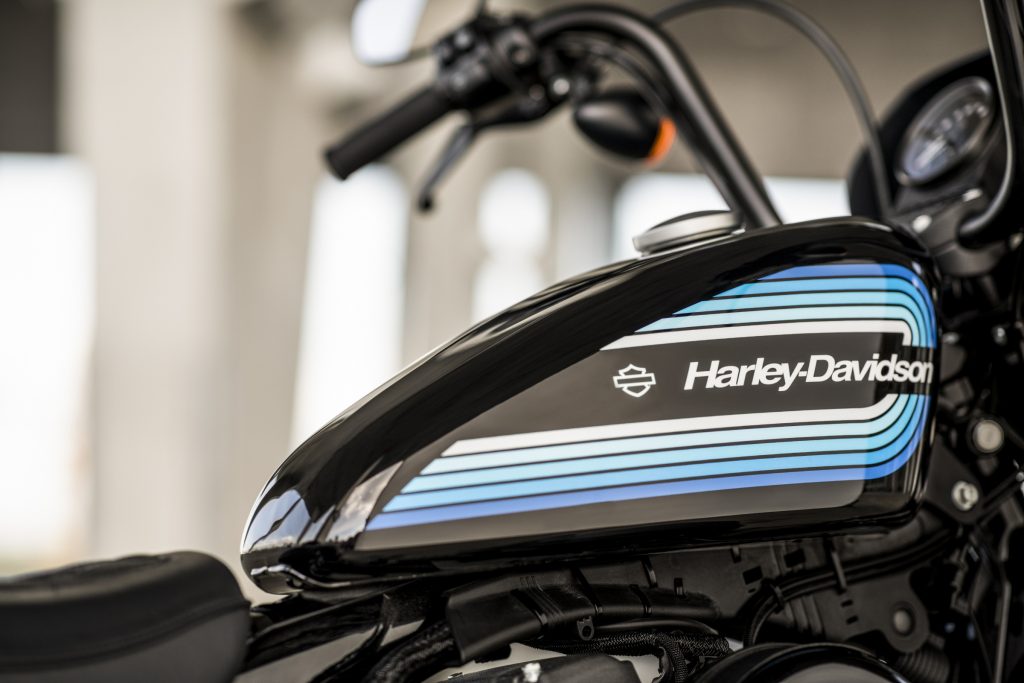 It has plenty of style to begin, it could have been on the cover of U2’s Achung Baby and would have fit right in with the AMF-era tank stripes.

And just like the original Sportster intended, the Iron 1200 is brilliantly fun in corners. It shares the same chassis as the Iron 883 so it has the same frame, wheels, suspension and just about everything else. In fact, despite the fact that the it has a bigger engine and taller handle bars, it manages to be less than a kilogram heavier than the Iron 883, which is a feat by itself. 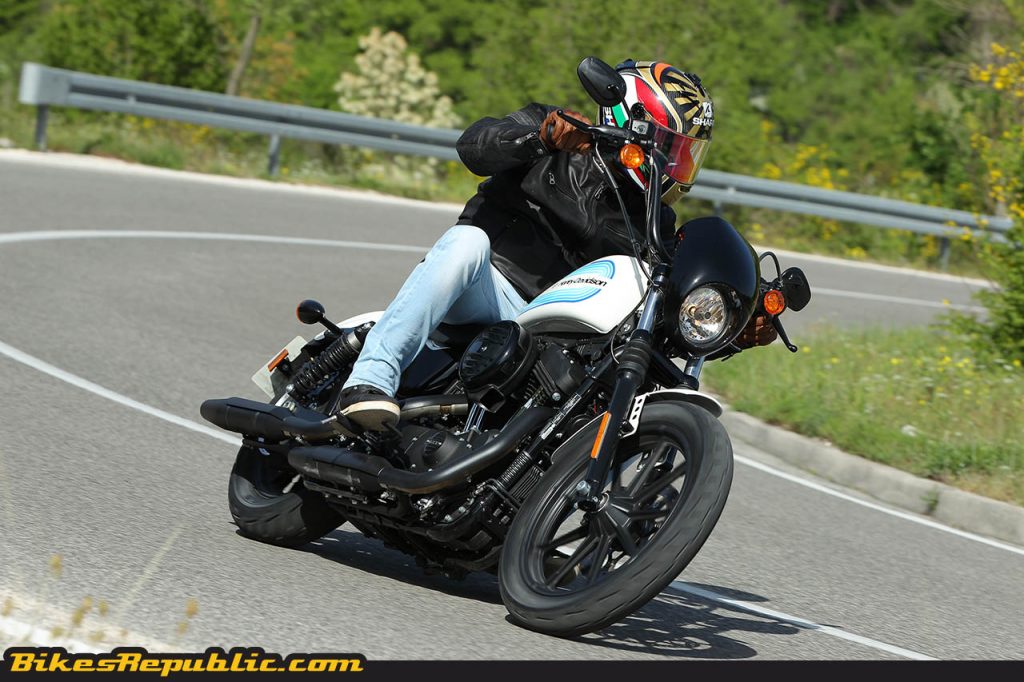 So the two are clearly siblings, just with different characters. You sit with your fists in the wind, the mid-set foot pegs giving you a perfectly adapted peg-scrapping sitting position, and the big 19-inch front wheel makes this Sportster one of the best handling in its class. It also has an amazingly comfortable seat, much much more comfortable than the 48 Special. 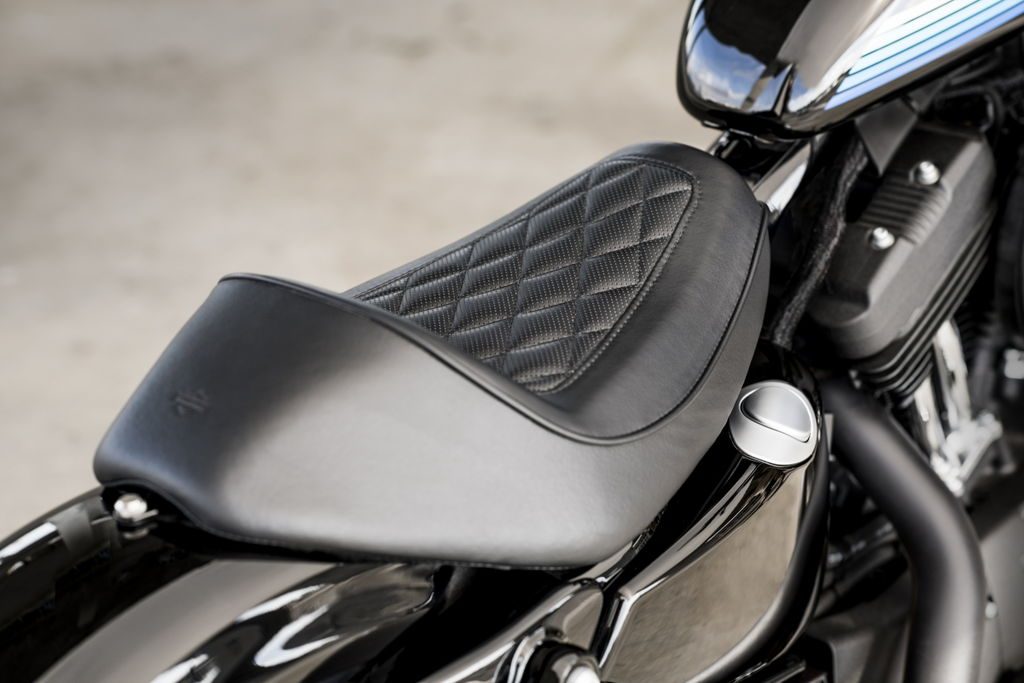 But it is that engine that suddenly makes this Sportster Iron everything it should have been right from the start. The Iron 883 was great but it was also very much an “entry-level” model at one point of time so it felt limited when it came to performance. The Iron 1200 obviously built around the fun package of the 883, but with heaps more fun.

So it all begins with a new air-cooled evolution engine which has 30% more capacity than the 883 and produces about 100Nm of torque. The engine is connected to the same 5-speed gearbox as the 883 though with different gear ratios. As with most Harley-Davidsons, the best way to ride the 1202cc engine is just to leave it in a higher gear and ride the mountain of torque is offers through the corners. Of course, you could bang down the gears and catapult out of corners too. Either way the Iron 1200 is happy to oblige.

But as fun as that sounds, there’s an unnerving feel as you get on the throttle though. Just as the bike piles on some speed, the front goes into a mini-wobble as the bike squats on maximum acceleration. It is not very noticeable but it is there everytime you blast out of a corner.

And matching all the fun and power is some fantastic handling. Don’t ever let anyone tell you that you can’t have fun with Harley-Davidsons because the Iron 1200 is brilliant in corners. Purists will love the fact that it does not come with a lot of electronics like ABS (optional) and traction control. And the entire meter cluster has been flushed down to the bare necessities, giving you only the most important information. And don’t let that headlight cover fool you, it sucks at deflecting the onslaught of wind, the Sportster Iron 1200 is still very much a city bike than it is a highway cruiser. 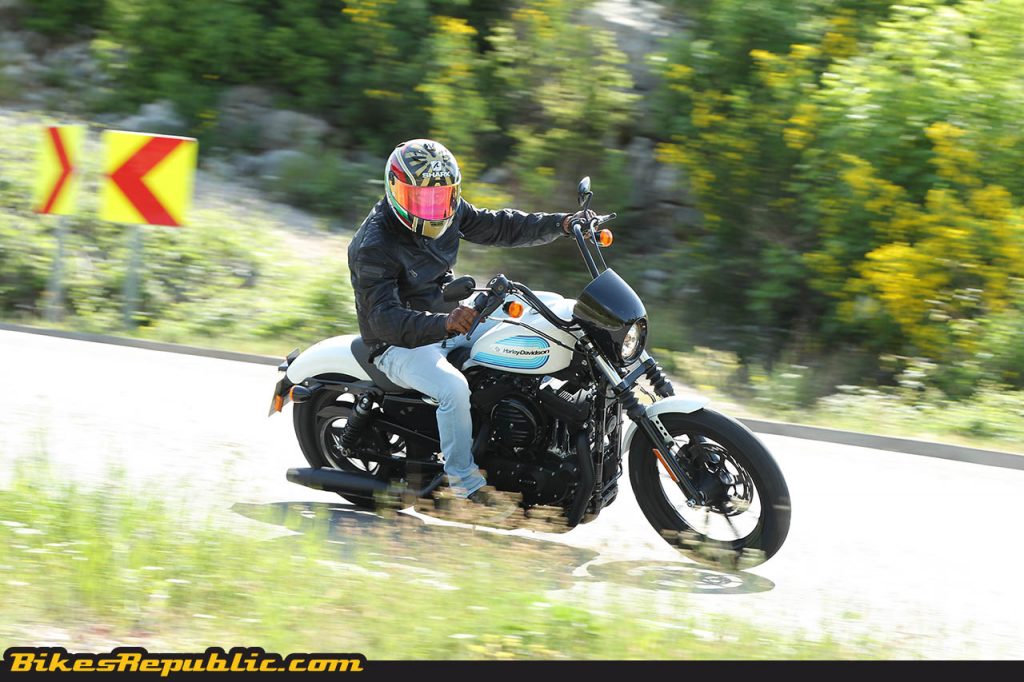 But despite the new herculean engine, the brakes and suspension are the same as the Iron 883, which means the same dual-piston calipers front and rear with a single disc keeping you in check. But this just means adjusting your riding style to allow for more foot-peg scrapping fun as you get to carry more speed into corners.

And because there is no electronic interference to control the wheel from slipping, you have to be gentle with the throttle, ask for too much and you risk lighting up the rear on exit. Which can be fun in experienced hands, but scary for the rest.

We spent the entire day literally carving up mountain roads, scrapping foot pegs on both the Iron 1200 and the new Sportster 48 Special (which we will get to in a later article). There is no doubt that the Iron 1200 is one of the greatest Sportster’s to date, just a pity that it has not made it to the Malaysian market as yet, but when it does, pay attention as only a few bikes have the talent to back up good looks, and this Iron 1200 is more than just talented.

Do you prefer a bigger bike? How about something like a Road Glide? Click here to read our review and to watch a video on it. Or do you prefer the classic styling of the Street Glide? We rode that too! Watch our video review here.