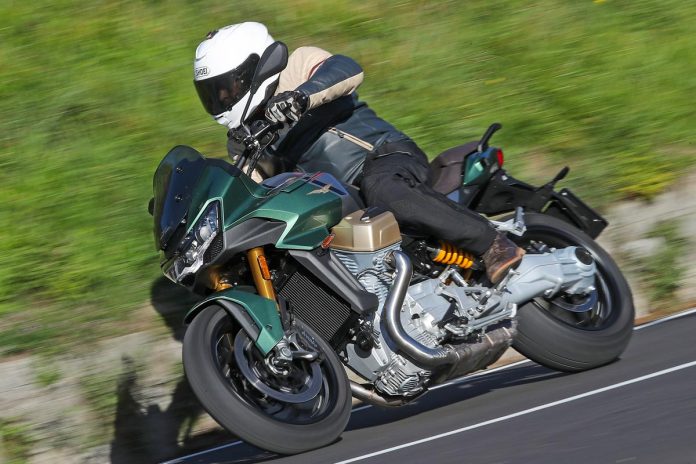 The fascination of the Moto Guzzi bikes: what really makes it tick?

Is it the iconic V 2 engine that, from the first version of the V 7 in 1967, pulsed in the machines of the Mandello brand with a clearly perceptible character and gave them an incomparable look, perhaps one of the most beautiful designs for a powertrain that can be stuffed in between two wheels? 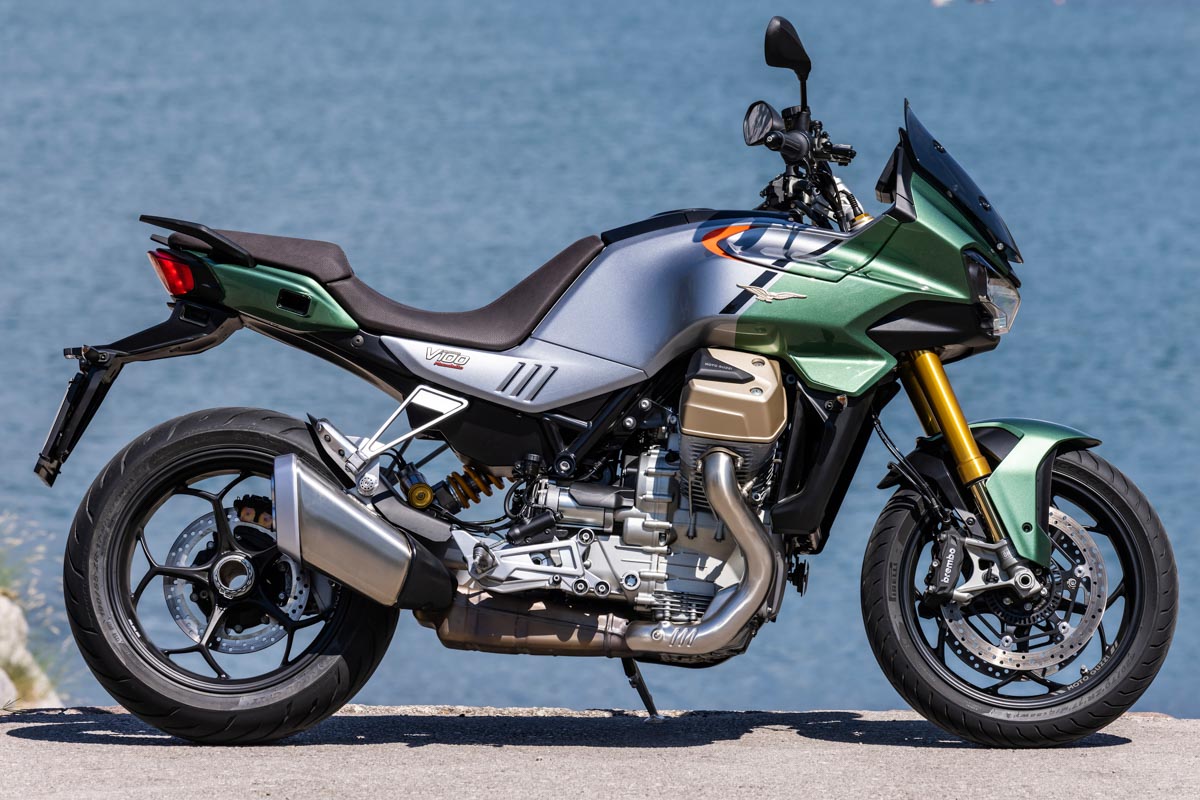 Or is it the hard metallic engagement of the starter motor with the resulting jerk of the whole bike? Maybe the twist to the right as a counter reaction of the longitudinal crankshaft when torque is applied forcing the Guzzi riders to ride different lines in left-hand bends than in right-hand bends. Or rather the mechanics, the reassuring clicks of the rocker arms on the towering air-cooled cylinder heads that tall riders can use to warm their knees to ensure an intense symbiosis between man and machine.

Or perhaps simply the charm of classic mechanical engineering, without electronics, technology to “touch” and if necessary do fix yourself?

Guzzis were always a bit different and by the early eighties they had already lost the race for top performance and lap times on the racetrack. However, the fan community is deeply rooted in the brand and showed a strong presence at the 101st anniversary celebrations at the company’s headquarters on Lake Como in mid-September 2022 with 60,000 fans. 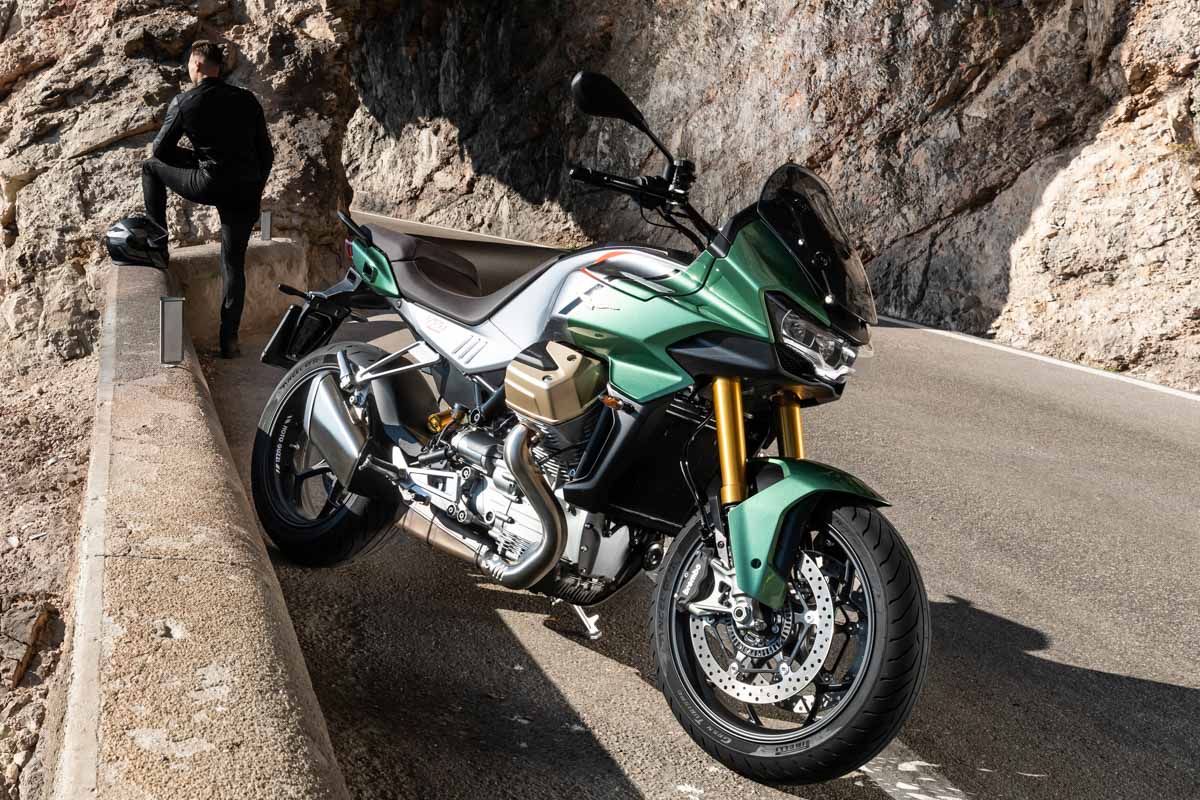 For 55 years, the Mandello machines got by with practically two engine families: on the one hand, there was the “Big Block”, the engine block designed as a sand-cast tunnel crankcase, which went into series production with the V 7 in the mid-sixties. In numerous variants and upgrades, this engine existed practically until 2020, the last year of production of the 1,400 cc models California, Audace, Eldorado and MGX with Euro 4 type approval and power outputs of up to 97 hp. As an air-cooled four-valve engine, it reached 110 hp in the 1200 cc Norge and Stelvio from 2007 onwards.

The model range was completed towards entry level by the “small block”, whose engine casing was split horizontally. The engine debuted in 1977 in the V 50, followed by the V 35 model, and from 1989 was also available with 750 cc in the Nevada model.

When the company was taken over by Aprilia in 2000, a completely new, water-cooled V 2 engine with 75° cylinder angles was already running on the test bench. However, the entrepreneurial courage and then also the financial resources to modernise the brand with an innovative drive train were lacking, which finally led to the acquisition of Aprilia, Moto Guzzi and Laverda by Piaggio in 2004.

In 2018, a breath of fresh air was felt in Moto Guzzi’s development when the V 85 was presented with a newly designed engine, which, like the big block, was always designed with a “tunnel” type crankcase: the “Classic Enduro” still shines today with a balanced and stable chassis, into which the air-cooled two-valve engine is brilliantly integrated. The Kickoff for the new V 100 Mandello project happened in the same year 2018. So, after a good twenty years, the Piaggio-Guzzi-Aprilia triumvirate (Moto Guzzi bikes are developed in Aprilia’s R&D department) had finally given the green light to a completely new bike that would sign the company’s march into the future.

The iconic transverse V 2 layout with longitudinal crankshaft and cardan rear-wheel drive was retained. However, for a “contemporary” power output of 115 hp, 4 valves had to be accommodated in the cylinder heads; due to the thermal issues between the two exhaust valves, there was no alternative to water cooling. To comply with the current Euro 5 and later Euro 5+ emission limits, it was necessary to take advantage of the “Tumble” effect in combustion that could only be obtained with a vertical “downdraft” design of the cylinder heads that brakes with Moto Guzzi’s tradition of horizontal intake and exhaust. The new layout significantly improves combustion at low engine speeds having a direct impact on driveability and exhaust emissions. 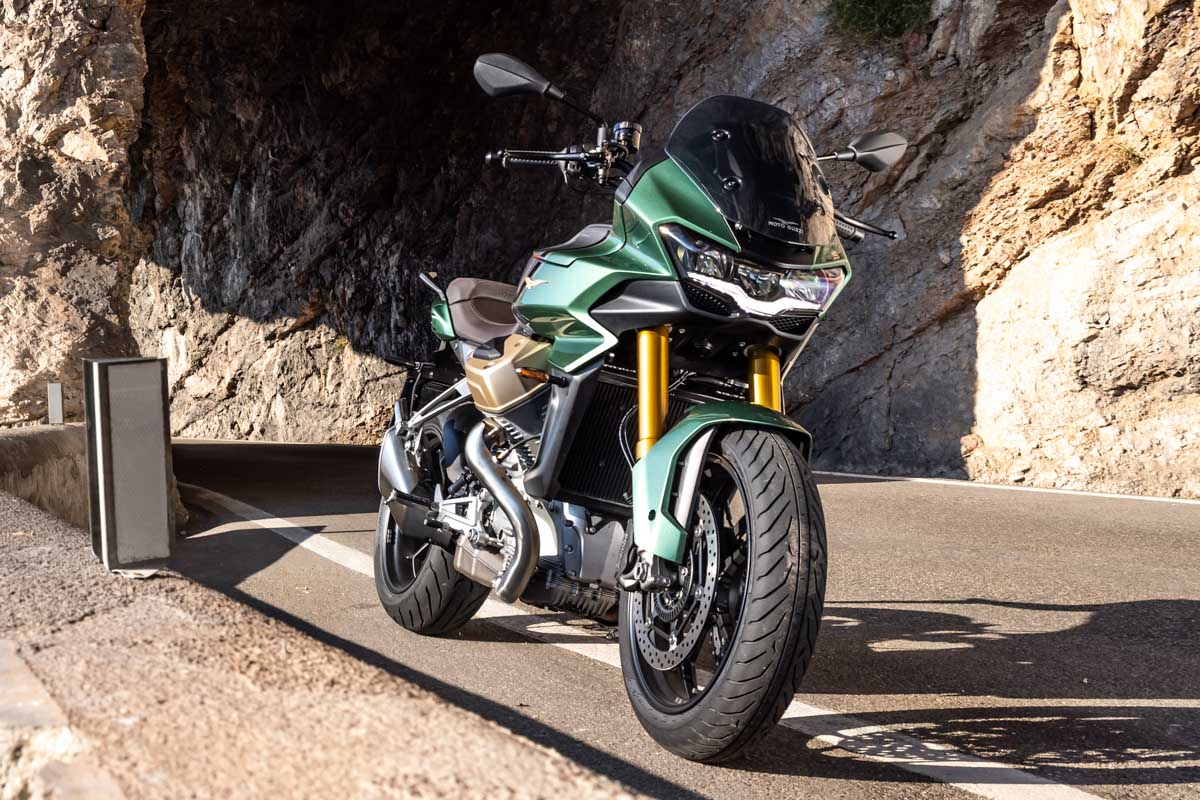 The new engine has been designed to be very compact and is 103 mm shorter than the V 85 powertrain. The die-cast engine casing is now split horizontally and the gearbox is bolted to the rear of the engine. Moto Guzzi breaks new ground also with the oil-immersed multi-plate clutch: it is now located at the rear end of the transmission block and can be serviced directly without removing the rear wheel or swingarm. 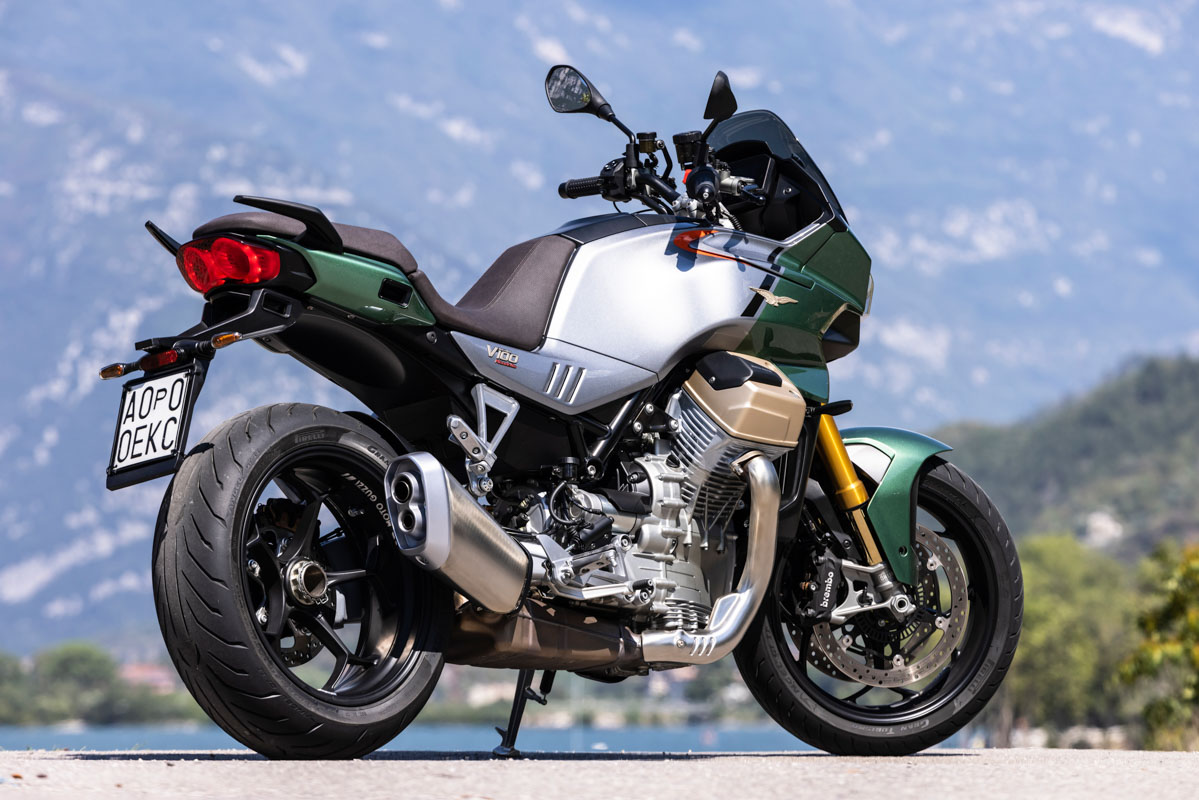 The 578 mm long single-sided aluminium swingarm is mounted directly on the gearbox. The drive shaft leaves the transmission unit in a lower position than on previous models on the left-hand side, which is advantageous for a rear-wheel drive free of torque reactions of the suspension. The drive shaft no longer runs parallel to the rear wheel with two joints, but is inclined outwards by 6° and has only one joint at the front, which means that there is now space for a 190 tyre. In the footrest area, the width of the drivetrain could be reduced by 36 mm, which, like the 4.5° inclination of the cylinders relative to the vertical line, benefits ergonomics.

In the water-cooled cylinder heads, the 4 valves (intake: 37 mm, exhaust: 32.1 mm) are arranged in a V-shape at an angle of 12+12° and are driven by 2 camshafts and finger followers. With this solution, it is possible to reduce the moving masses and to achieve steeper valve opening ramps as well as low valve overlap (which is good for emissions). The camshafts with plain bearings are mounted in a separate die-cast aluminium module in the cylinder head, and the valve clearance is adjusted by means of shims. 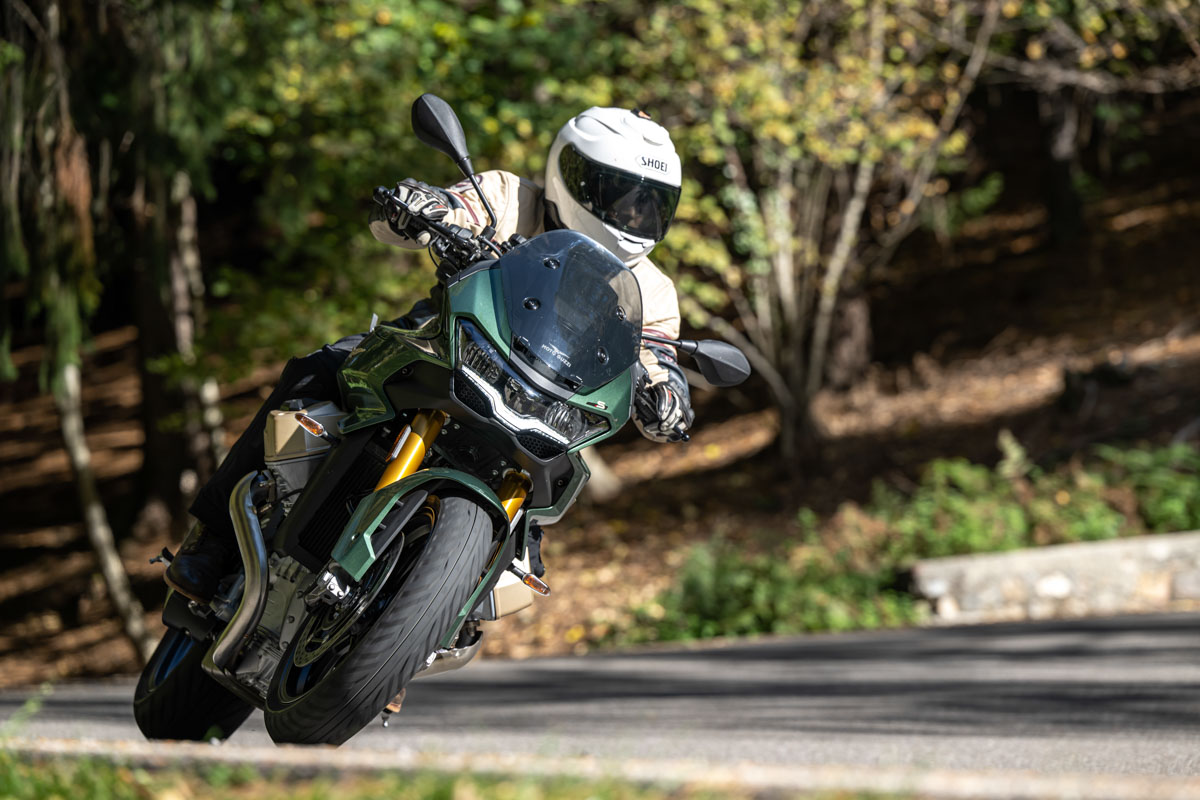 The starter motor is located on the right-hand side above the gearbox and starts the engine via a scissor-type freewheel. Since the first-order inertia forces of the 90° V 2 engine cancel each other out, this component, designed as a flywheel running in the opposite direction of rotation to that of the crankshaft, serves to compensate for the engine’s stall torque during starting and acceleration. This allows for a lighter crankshaft and both shafts together provide the necessary drive inertia for smooth operation and high torque. 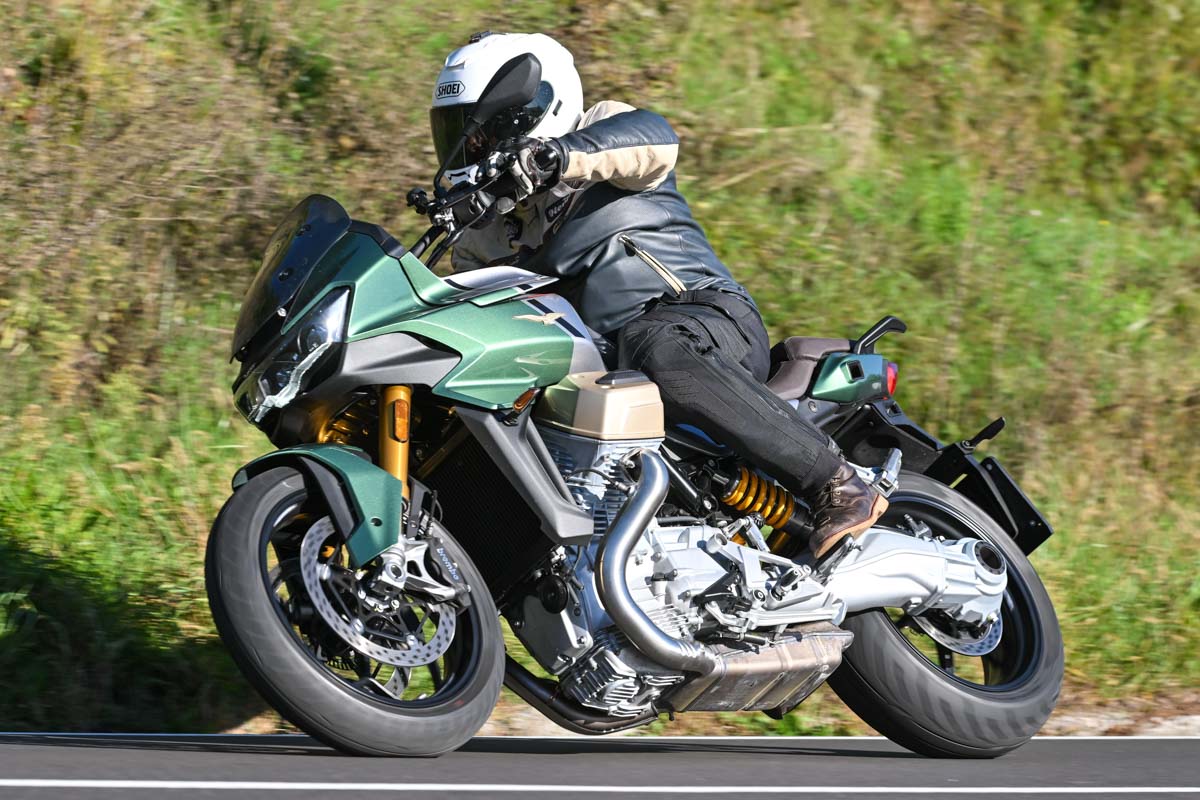 The shaft of this counter rotating “flywheel” comes out of the rear of the crankcase and drives the alternator, located high up between the cylinder heads, via a V-belt. The water pump, driven directly by the crankshaft, is located on top of the gearbox on the left, and the oil filter is bolted to the underside of the engine, accessible from the outside, for maintenance. 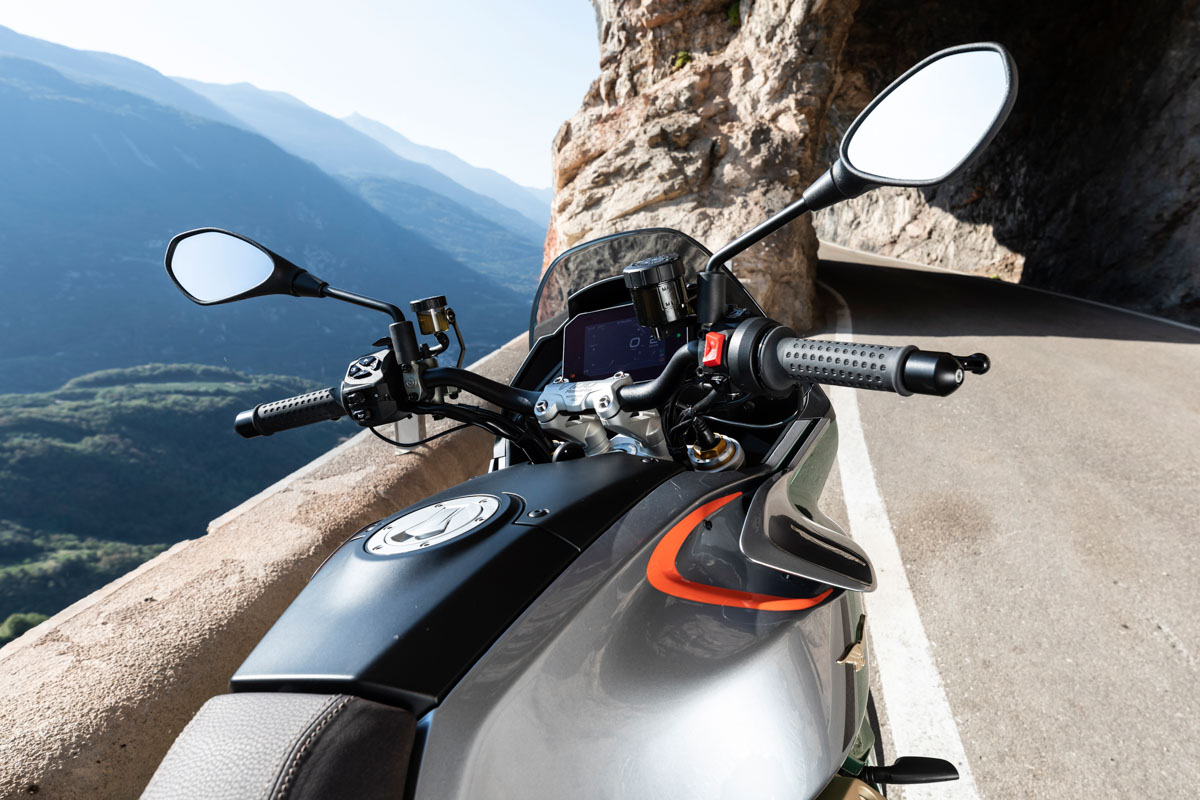 The standard version of the V 100 Mandello is available in Polare white and Magma red with gold satin rims. In addition, there is a special V100 Mandello Aviazione Navale version in grey, limited to 1913 units.

The ready-to-ride weight of 233 kg with a tank 90% full (total capacity of 17 litres, thus making up for a dry weight of about 221 kg) is hardly noticeable when manoeuvring the compact machine, the two-section seat with a height of 815 mm allows a safe handling. The switch units on the handlebars and the 5-inch TFT display are familiar from Aprilia. Nice: the graphics on the handlebar bridge as well as the well-placed cables and wires and the harmonised screws in the front area of the bike (which remains always in view while riding). 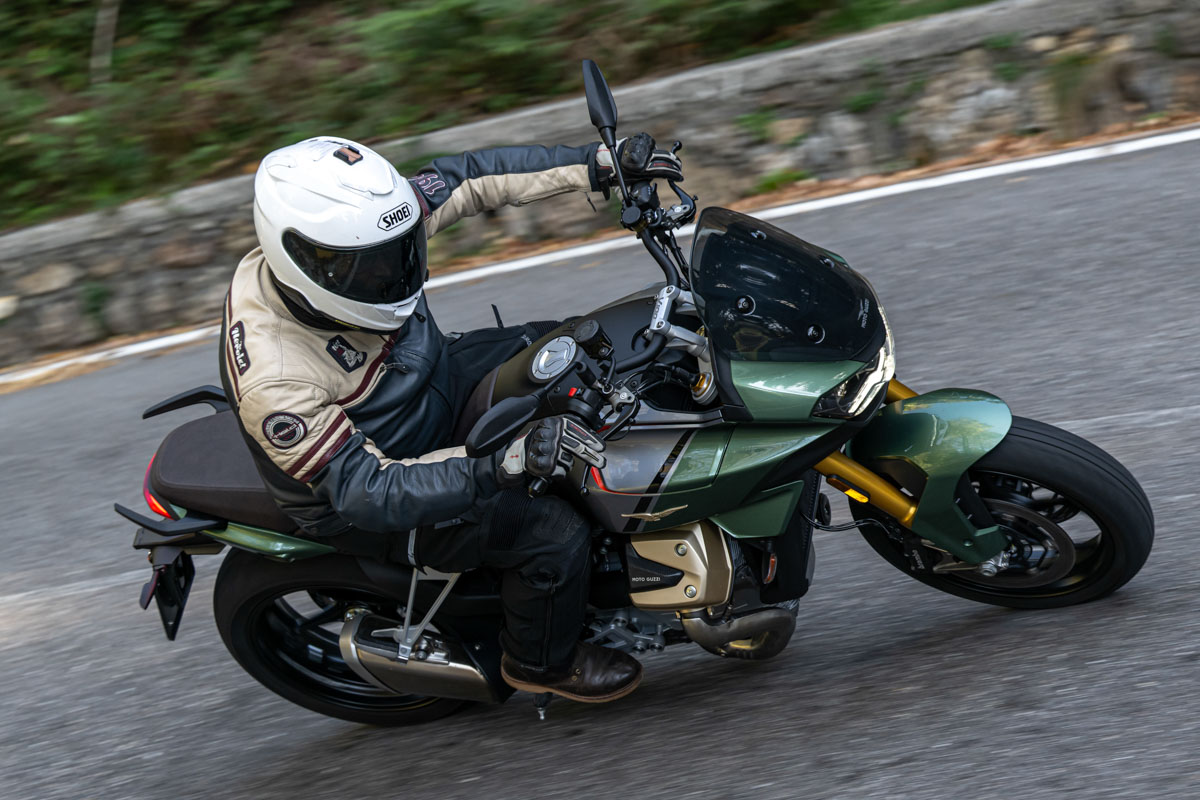 The first surprise comes when starting the bike: there is no classic metallic “clunk” when engaging the electric starter, and the bike takes off without responding with the usual impulsive movement to the right, typical of the classic V 2. The second surprise comes when engaging first gear: a clearly audible bang is noticeable. The setting of the clutch (which rotates at the same speed as the crankshaft) and the shift mechanism could still need some fine-tuning due to the servo-assisted clutch, slight pulsations can be felt at the lever, which can be annoying if you want to accompany shift transitions with modulations of the clutch. 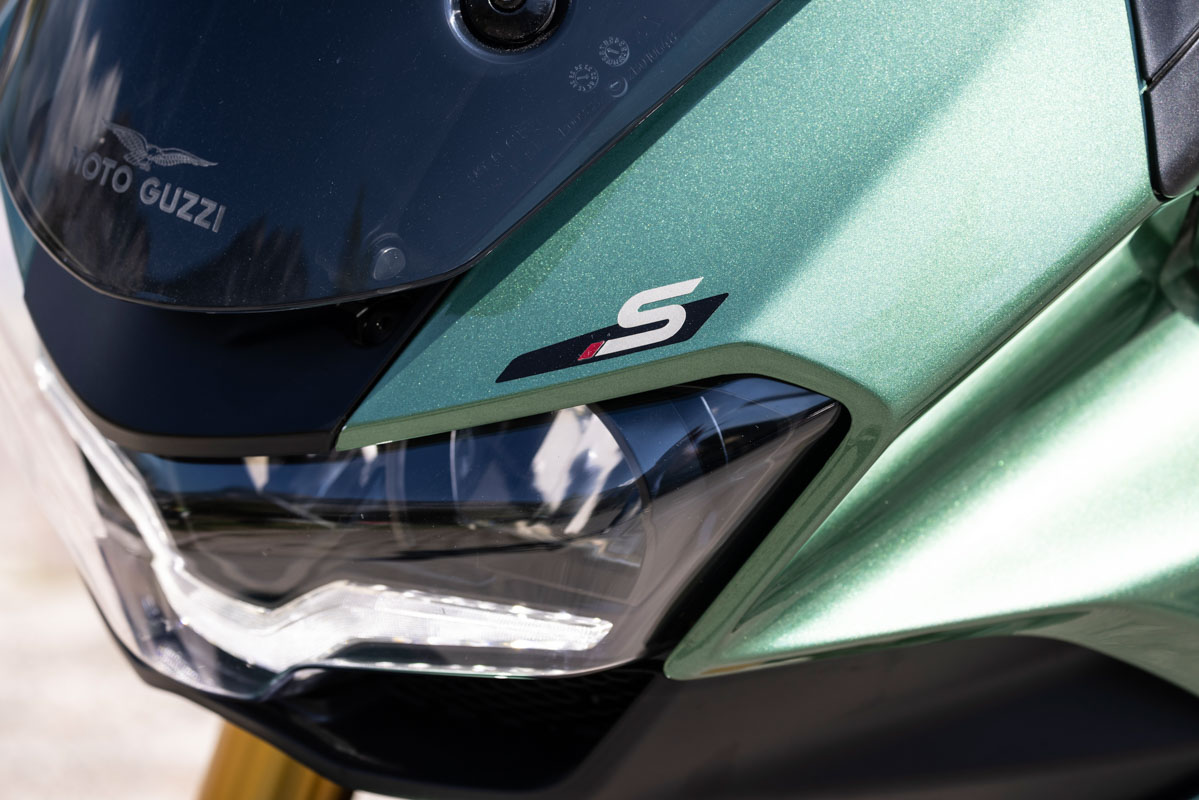 Otherwise, the new 1042 cc engine gives a mature impression and delivers remarkable torque even at low revs (from 3,500 rpm it navigates the torque curve above 92 Nm). The gearbox can be sorted quickly and the rear-wheel drive gives the impression of driving a motorbike with chain drive because there is no “lift” effect. Very impressive is the urge of the engine to grow in revs once passed the 6000 rpm mark: a real boost propels the bike at lightning speed all the way to the rev limiter at 9,500 rpm. Never before has such a feature been experienced with a Mandello V 2, which opens up prospects for completely new and sporty riding styles. In “Sport” and “Street” modes however, the engine is a little too aggressive on the throttle; with “Tour”, there is still enough power available and the throttle On/Off transitions are smoother. 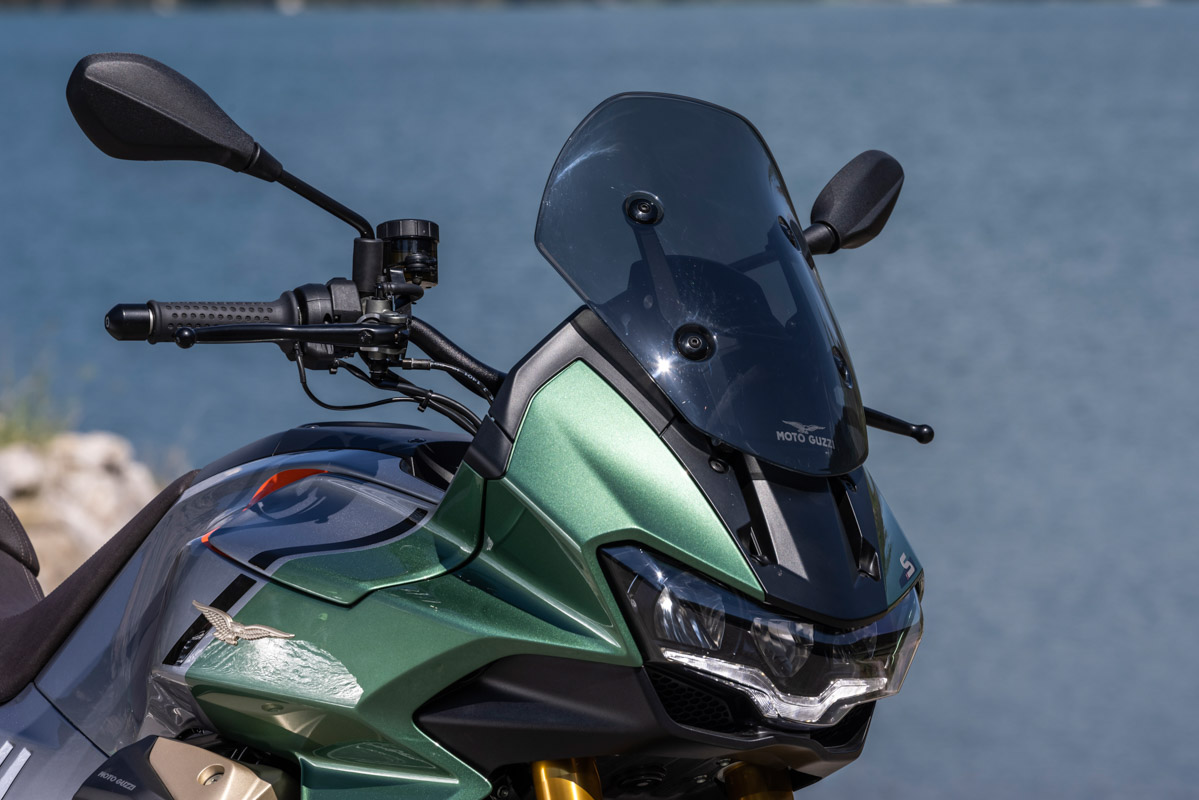 The riding position fits well, but with my height of 175 cm I would prefer the higher seat with 835 mm of height for a more comfortable knee angle. The Öhlins semi-active suspension elements with 130 mm of travel front and rear work familiarly well (basic version: Kayaba), as does the Brembo brake system with two 320 mm brake discs at the front and one 280 mm disc at the rear. 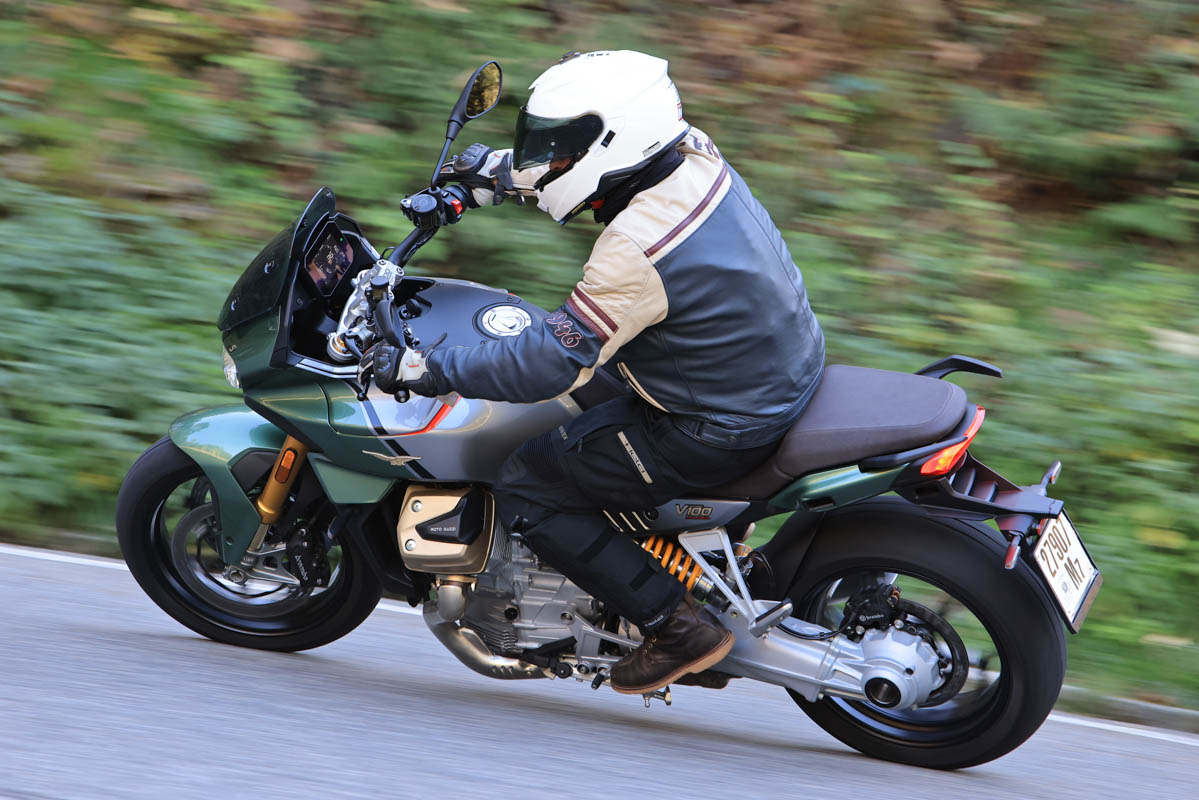 The chassis (without steering damper) which features a tubular steel frame that integrates the engine as a stressed member offers exemplary stability. However, the front wheel of the bike feels a bit sluggish in tight corners and has a tendency to oversteer at low cornering speeds. It’s not completely neutral as one is used to by the Tuono 660 from the same company, for example. A little more rebound damping in the forks could help to calm the front end on the bumpy mountain roads. 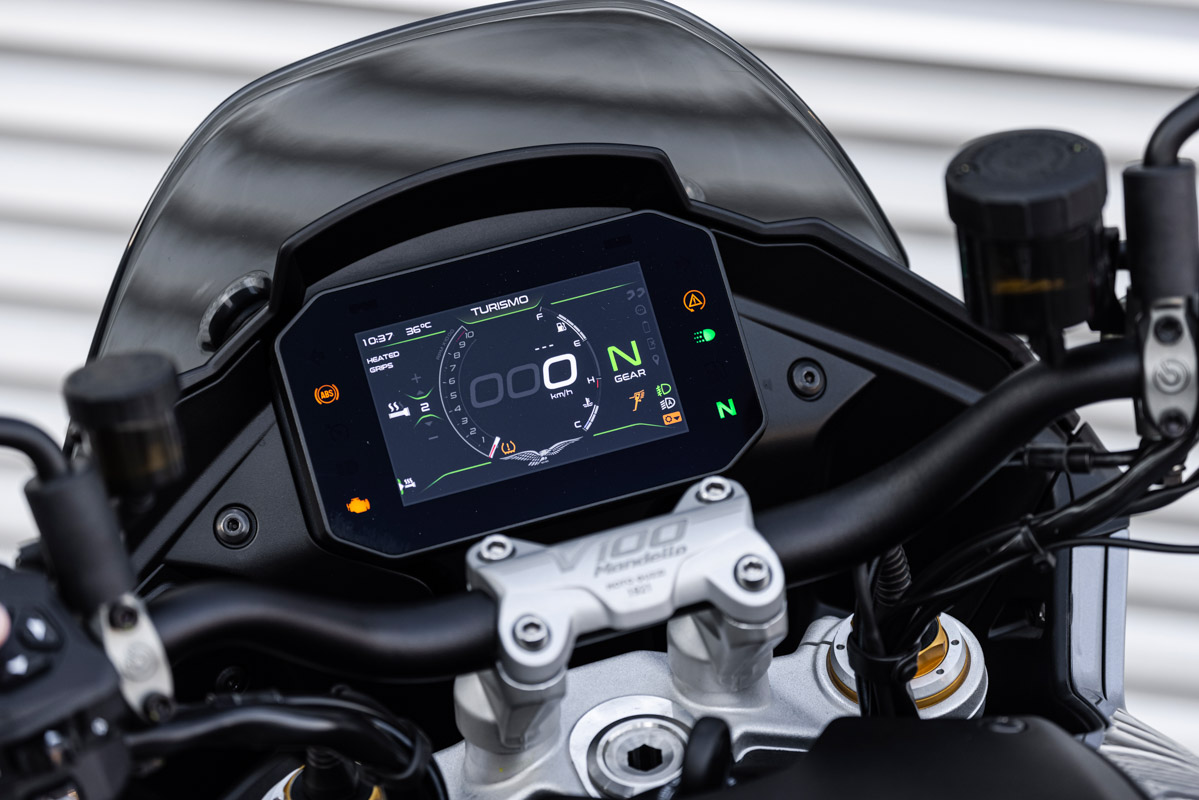 The electrically adjustable windscreen is too small to offer real protection and the adjustable deflectors on the side of the tank, which supposedly reduce air pressure on the rider by 22%, look more like a marketing gimmick. At 150 km/h, the flaps seemed to direct the wind more towards the inside of the thighs. The aerodynamic advantages, especially in rain, as stated in the press release, have yet to be proven on a longer run.

For those who want to configure the V 100 as a touring machine, numerous accessories are available, such as luggage systems, heated saddles and grips, as well as a larger windscreen, engine guard and main stand, which will increase the price (in Germany) from 15,499 euros for the basic version and 17,999 euros for the “S” version. 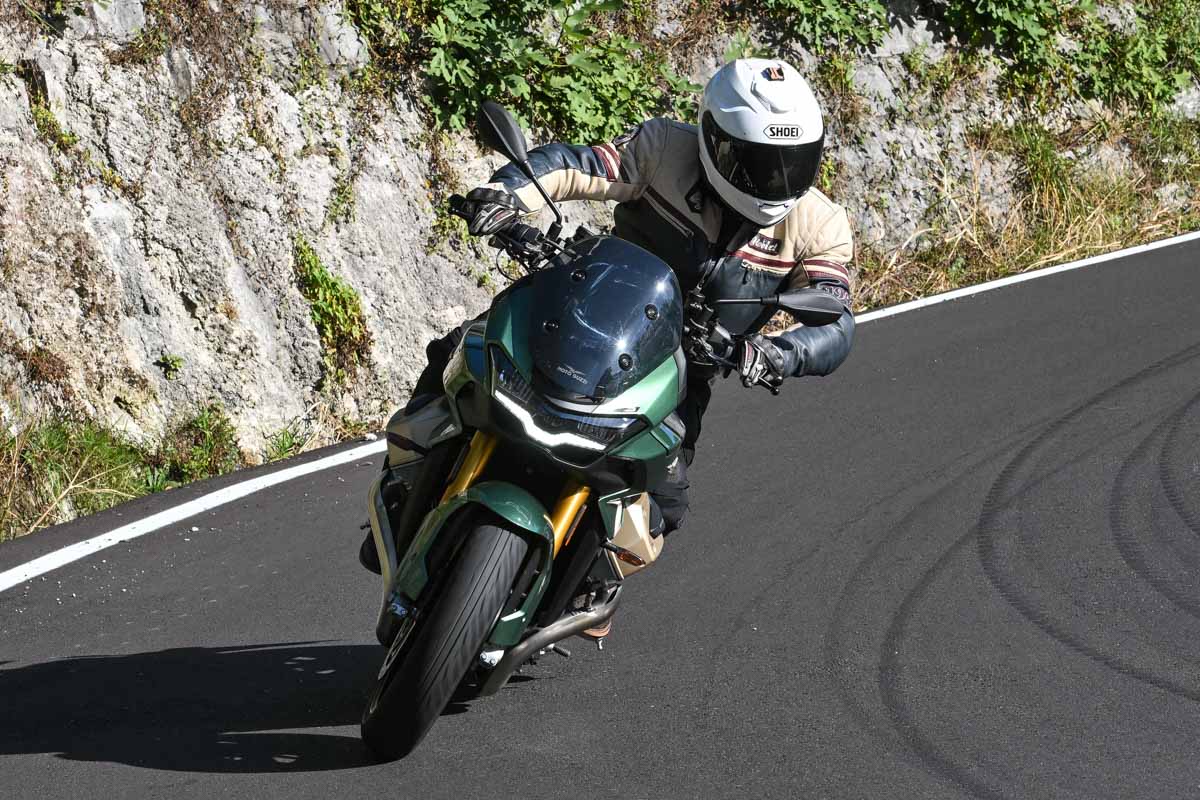 With the all-new V 100 Mandello, Moto Guzzi has built a great new bike. Technically and in terms of handling, this Guzzi is now in the same league as the competition, and the new engine with its great power and dynamic characteristics is particularly pleasing. The machine makes a noble impression and is of high quality, as well as being robust and rational in design without sacrificing emotions. The fascination for one of the oldest motorbike brands in the world is now based on modern technology: we are curious to test also the next models.