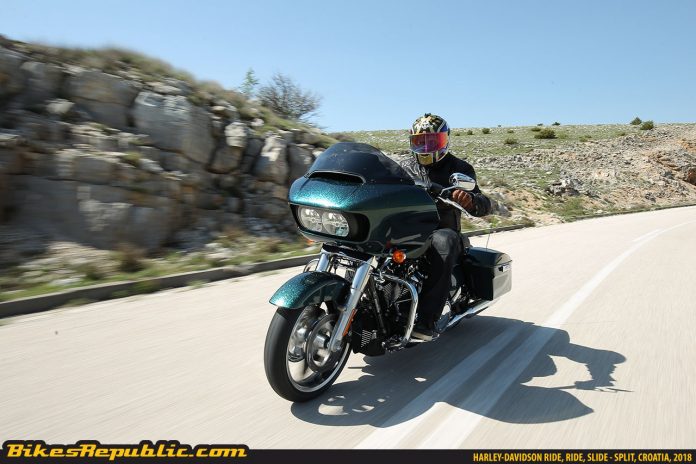 “And, when you want something, all the universe conspires to help you achieve it.” A quote from Paulo Coelho’s ’The Alchemist’. Something that suddenly feels all too true for a boy who grew up dreaming about riding Harley-Davidson’s along some of the most beautiful roads in the world. So you can imagine the bewilderment when the email came through, I read it, closed it, let it all sink, and read it again a few minutes later. Just to be sure. 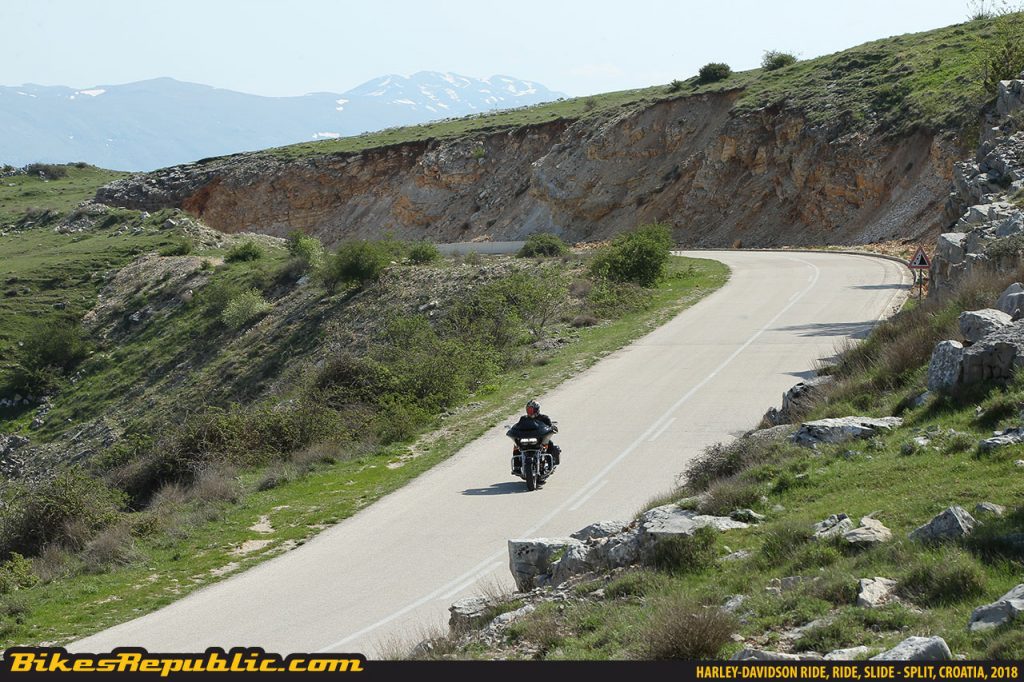 I replied the email the soonest I could, complete with passport details. It was probably the quickest I had ever replied to an email. I was not leaving anything to chance, obviously.

The Adriatic Sea is almost mystical in its appearance as you can see in the video above. It has seen kings, emperors, warriors, conquerers, the hopeful and lovers sailing over its beautiful blue waters. The Romans sailed it during their conquests, as did the Greeks. The Venetians too. It was a battle ground and also a source of food and romance.

And so, not too long ago, the shores of the Adriatic saw a different kind of story, one of realisation, awe and excitement, involving a few Harley-Davidsons and I. 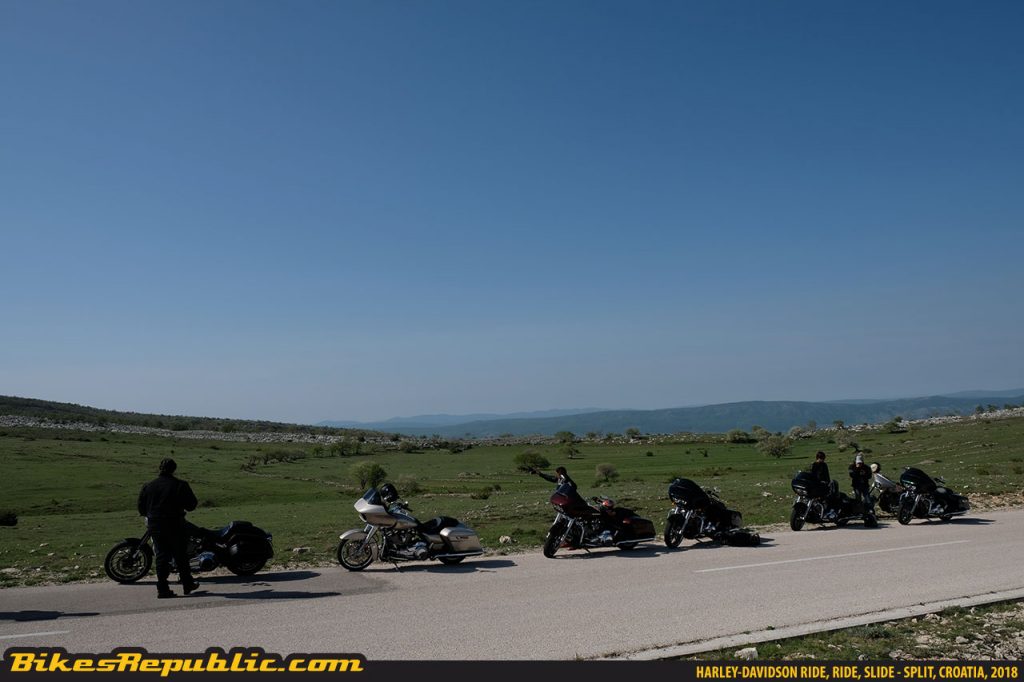 9am on a Tuesday morning. Being spring the sun rises early, so it was already blazing by the time I came face to face with the 2018 Harley-Davidson Road Glide.

We had flown into Split, Croatia just the day before, for the Harley-Davidson #riderideslide global ride, you can watch the highlights from our trip in the video above. The three-day ride involved testing the Road Glide, Street Glide, and the new range of Sportsters, the Iron 1200 and the 48 Special. And the final day was capped by a very special ride, one that I will not soon forget, and which I will write about in my final review, but just as a teaser, it involved riding on a flat track on specially built Harley-Davidson Street Rods. 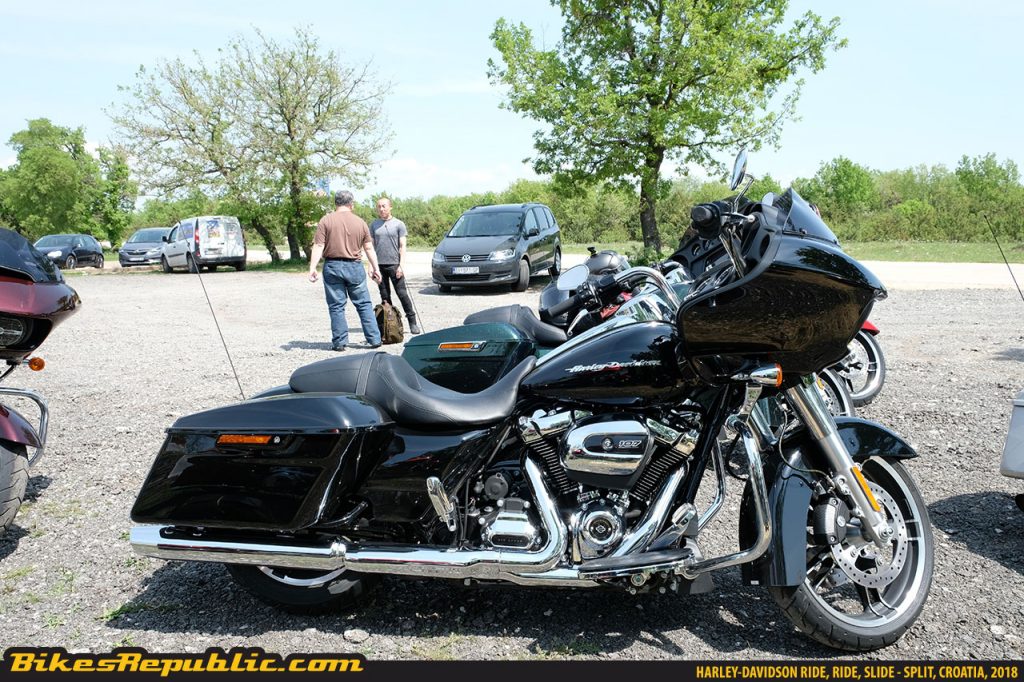 And so after a few weeks of emails and a near 24 hour travel time, here I was, face-to-face with a motorcycle I had lusted over for some time. Some may call it a “hey look at me” bike, for poseuers apparently. But there is a certain appeal in its design, a purity of purpose even, it’s a touring bike and nothing else. It is simply a big, beautiful bike that cocoons you in comfort and style, a package that has been improving since 1941, the year the first Harley-Davidson touring model was introduced, the FL. 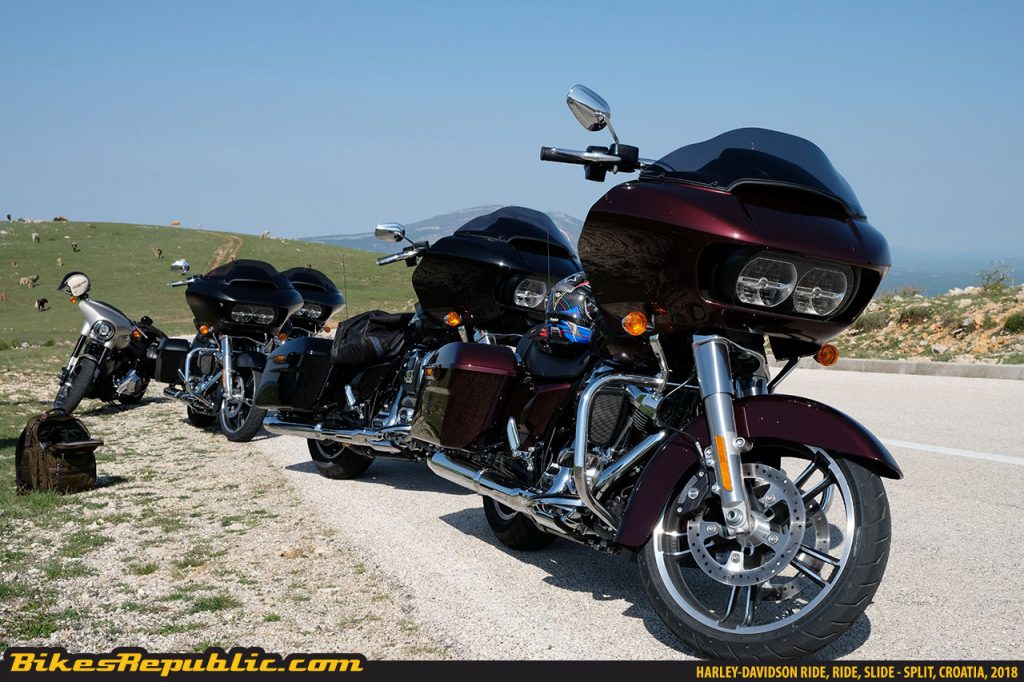 So yes, I am a fan of the Road Glide. I had spent many hours flipping through listing sites, monitoring prices and hoping that one would soon come within reach. It was previously priced at around RM200,000 for a brand new model, making it a stuff of dreams. 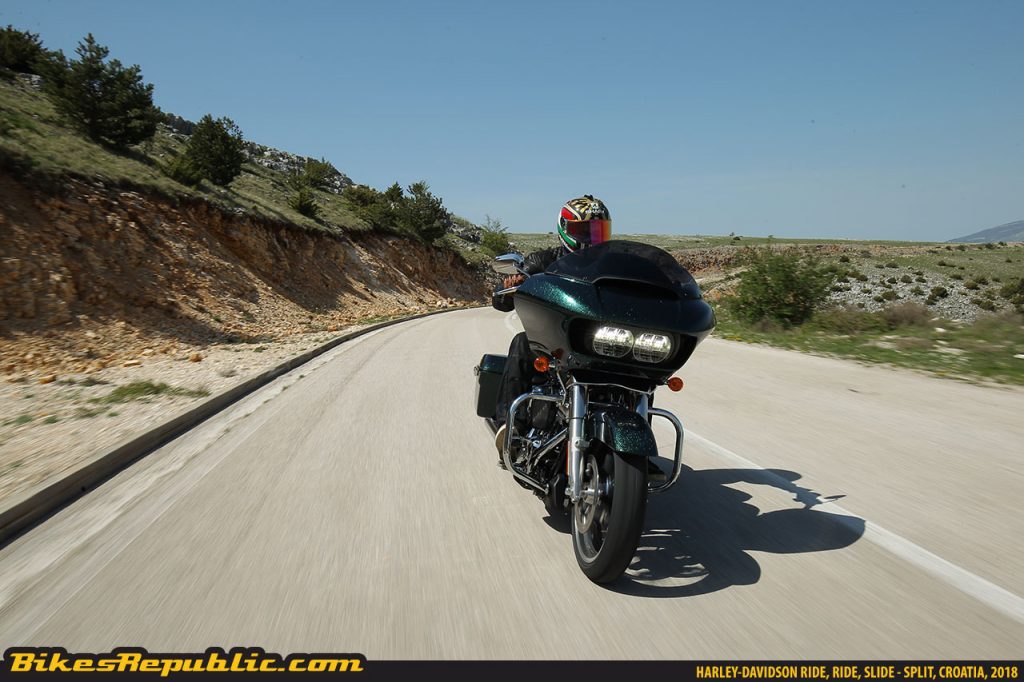 Now, it is priced at about RM180,000 after a local dealership “refreshment” campaign in Malaysia, and still out of reach. So when I had to pick a colour to ride for the day, it had to be one that I had always loved – a black on chrome Road Glide (though I had later hopped on to the metallic green you see in some of the photos here) 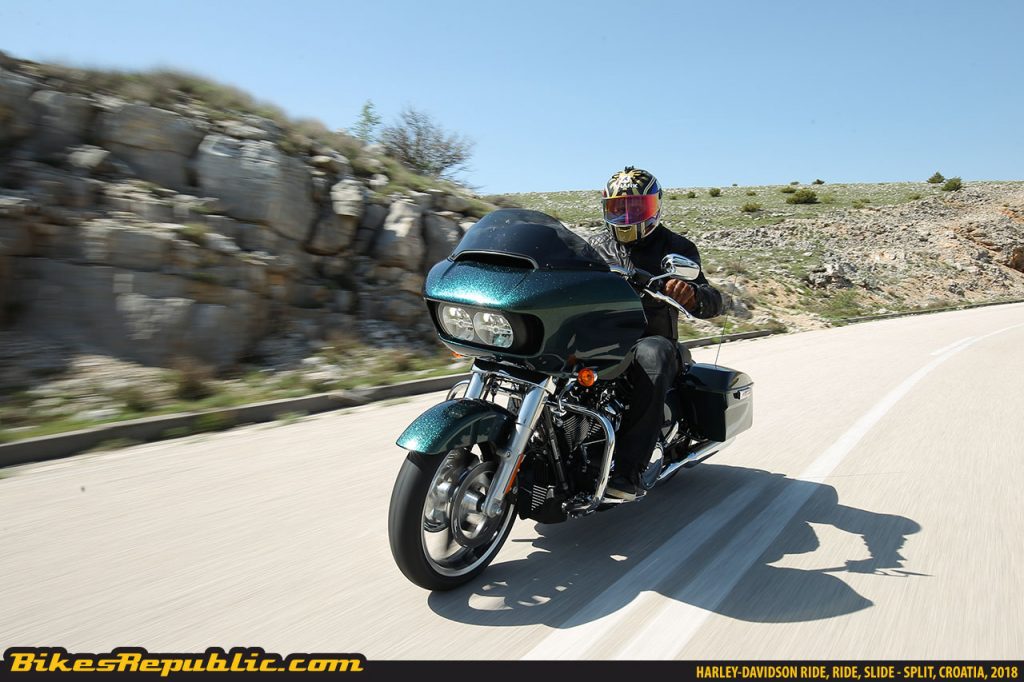 Glittering in the sun, I would be lying if I said I wasn’t nervous. The Road Glide weighs 388kg’s and would be about 460kg with me on it. So having to manage that heft through some tight roads in a country with peculiar driving habits, and having to do it all while riding on the wrong side of the road (Croatia drives on the right), my emotions were a perfect storm of excitement, nervousness, and some shock splashed in representing the surreality of it all.

Anyway, jacket zipped, helmet and gloves on and a quick thought for the man above, and it was all engines start. The keyless feature means you only need to turn the key knob to the left, switch on the ignition and thumb the starter button. It sounds more complicated than it actually is, and can be done in less than 5 seconds if you actually keep track. 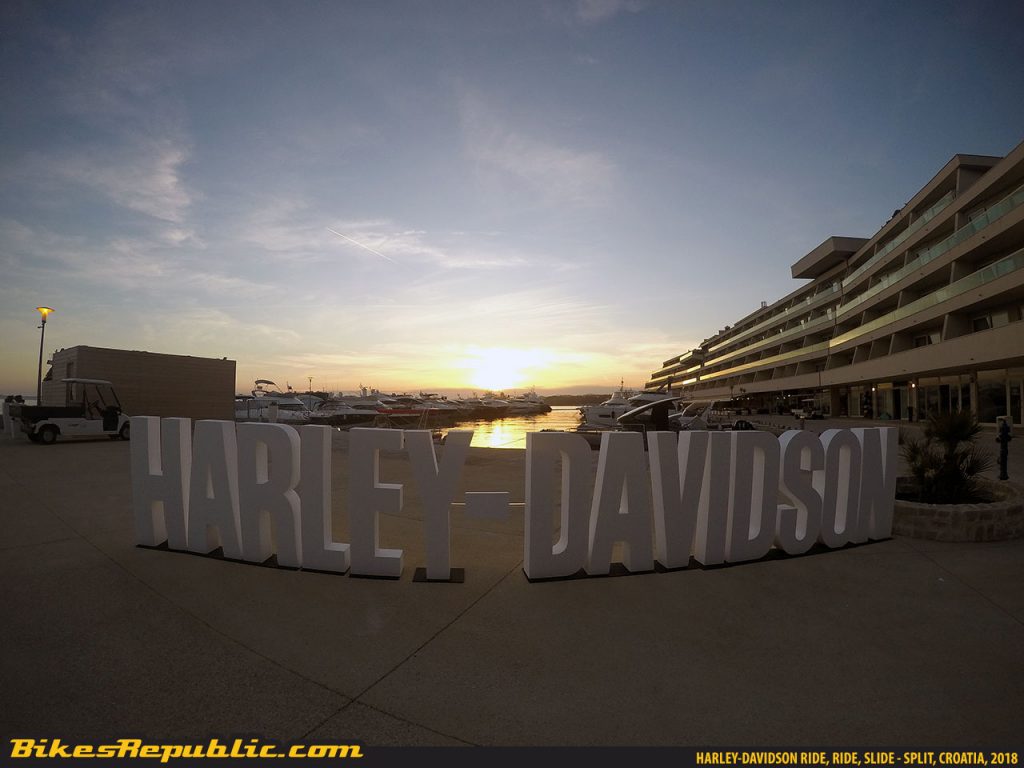 Being noise regulations compliant means that the exhaust note is flat, almost muted. It doesn’t really sound like a big, bad-ass Harley-Davidson should, but there is nothing a set of aftermarket Vance & Hines can’t change.

Out of the hotel and onto a narrow single lane street, and right into my first test. Just to our luck, the local municipality decided to conduct some road works just on the day of our test ride, so as you can probably imagine, the roads were entirely ripped up, dozens of excavators and trucks littered the streets, and traffic was at a complete standstill. A perfect testing ground for the low speed handling of the Road Glide. The video below perfectly captures the predicament I was in.

Harley-Davidsons have one of the best low speed handling in the business, so managing this brute of a bike through traffic was actually quite an experience. You don’t expect such a big, heavy thing to be effortless at crawling speed, but it was exactly that. But it still is a big bike, so even though it handles well, it still won’t fit through tightly spaced traffic. 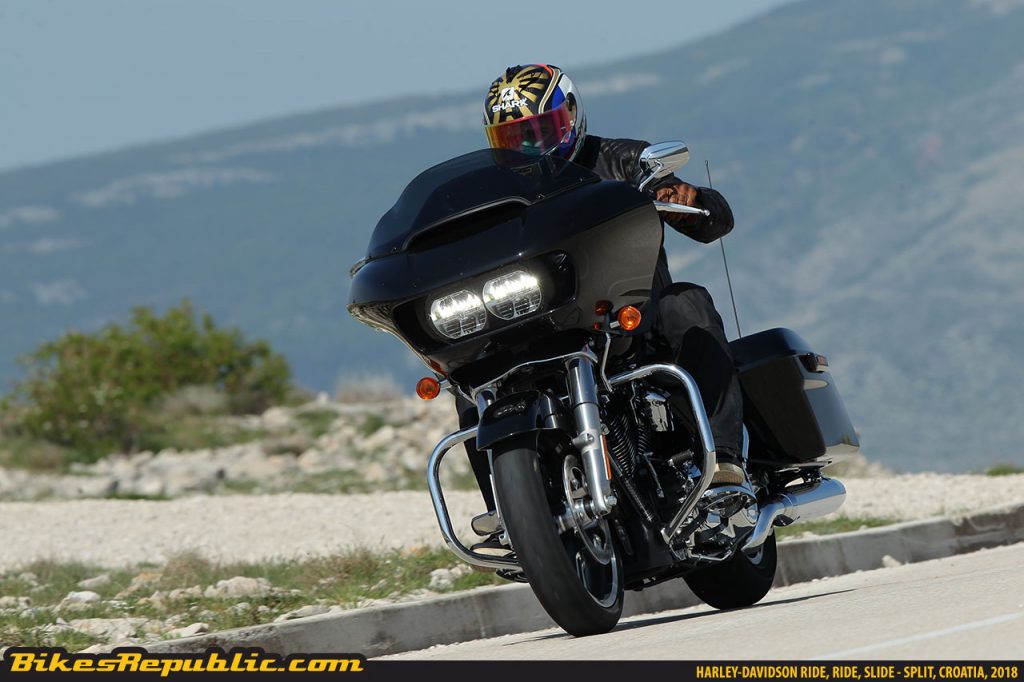 There is a believe among bikers that Harley-Davidsons are best left to the open highways than mountain carving. A sly dig at the supposed clumsy handling of Harleys, but the Road Glide is anything but clumsy.

On the highway and high up on the mountains of Split overlooking the Adriatic, the bike is comfortable yet chatty. The Showa forks up front manage the soaks quite well, but it is the rear that sends back tiny nuggets of information up your back, telling you exactly what is happening between road and tyre.

Hand adjustable for pre-load, I actually like the fact that the Road Glide is a good balance of comfort and tractability. Some older Harley-Davidson touring models had somewhat of a reputation for softish suspension that do well at keeping you comfortable, but don’t do much at telling you about the road until you’re flat on the floor. Well, that’s no more.

The Road Glide handles so well that it is almost okay to use the word agile for a bike that weighs nearly half a ton complete with rider. The suspension helps of course, but it is also the fact that the front end of the bike does nothing more than to connect the rider to the turning wheel. 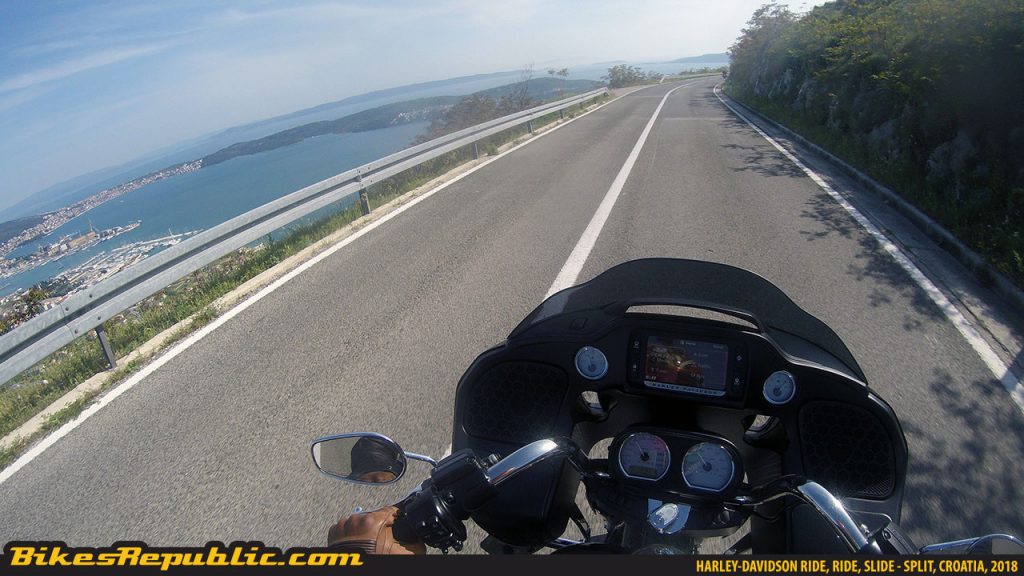 That massive fairing, entertainment system, speakers, and dials which you see above, are all connected directly to the frame of the bike. The Street Glide however, has all of that mounted to the fork, which makes the front heavier than it should be. The fact that the Road Glide has light front end is what makes the Road Glide so placeable in corners. Because the front has nothing else to do but turn, which is fantastic and the way it should be. 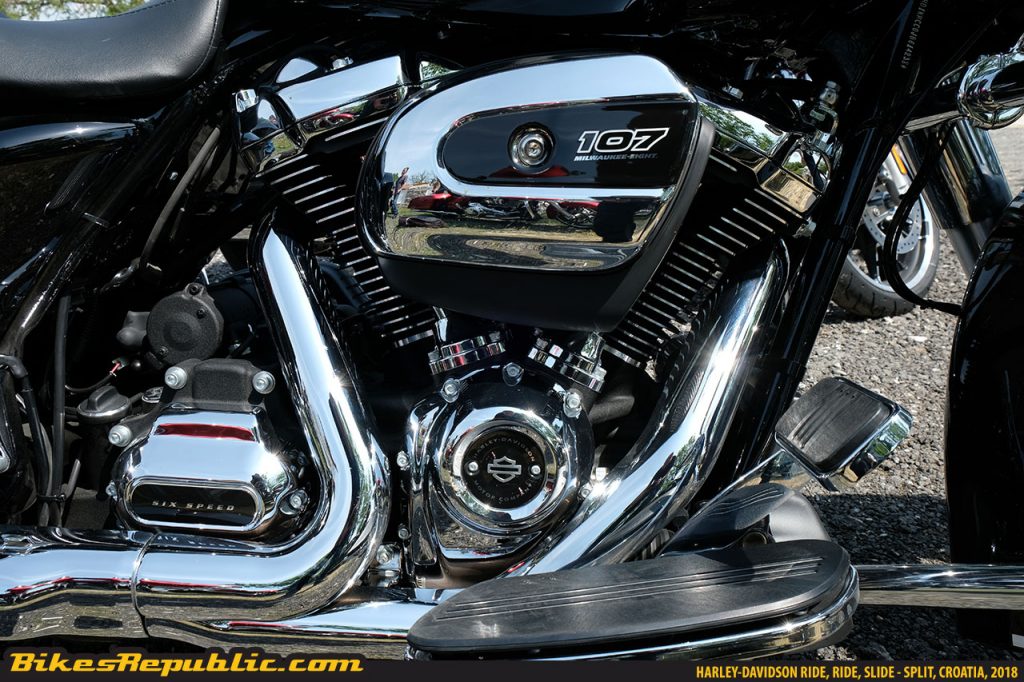 And being light up front means you can have some fun with the 1,746cc Milwaukee-8 engine. It produces 150Nm of torque from just 3,250rpm so it can be pretty quick off the line, and you can ride the wave of torque whenever you need as it seldom leaves you wanting power. It is no sport bike in the performance sense of the word, but all things considered, it is mighty powerful.

But the new Milwaukee engine is more than just a big, powerful engine, it is also refined, and almost smooth. I say almost because a Harley will never be Harley if it didn’t have its iconic vibrations. Whether an entry-level model or a flagship, a Harley-Davidson has to rumble, somewhat. The smoothness of the engine and the re-engineered rubber mounts help keep the vibrations away from the rider, and whatever that remains feels as if it were deliberately left there, perhaps as an invisible link to Harleys of past. 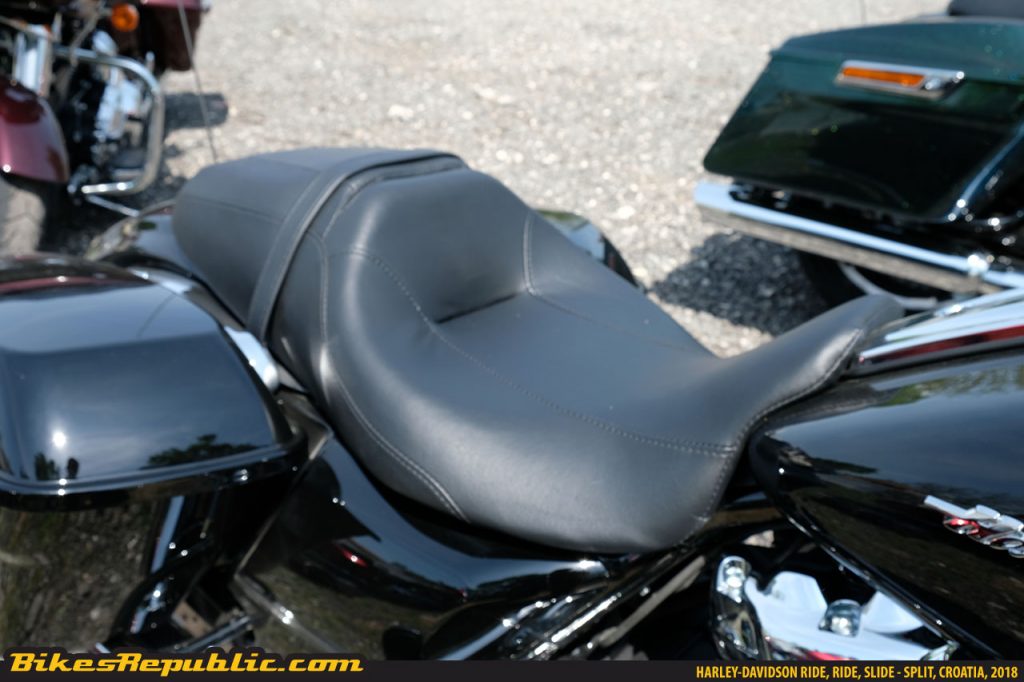 Comfort is of course top notch. The seat is plush, the reach to the handle bars is perfect and rarely do you get tired of reaching out to them, but if you do there’s cruise control to help. The floorboards are mounted further front than they are on the Street Glide, which gives the bike a more elongated feel. 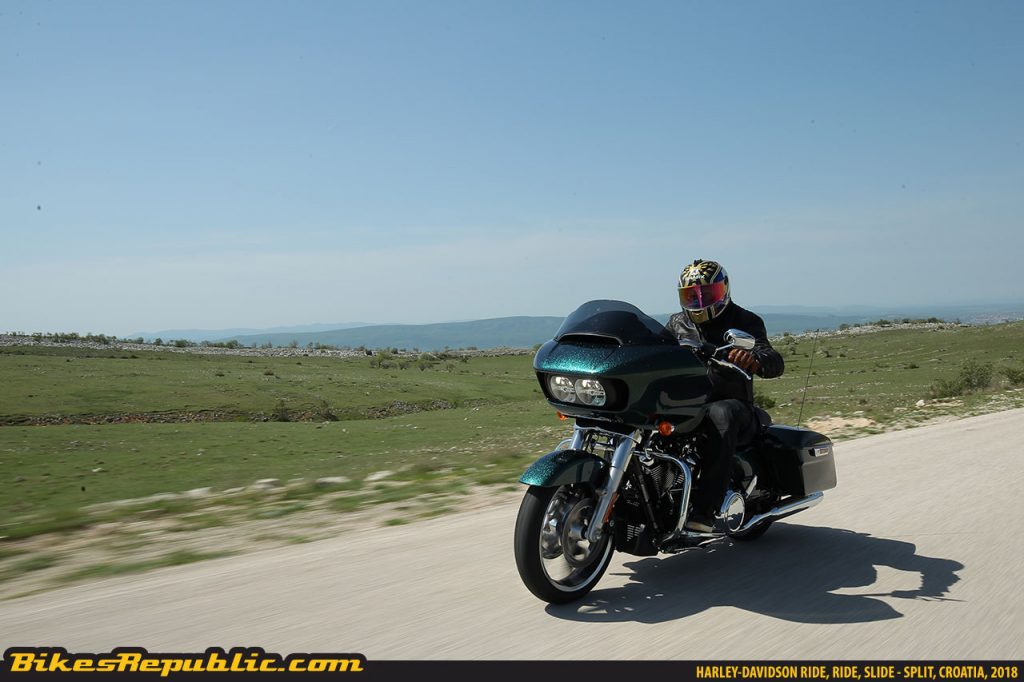 My left foot though kept getting caught between the shifter pedals, the space between the up and down shifter was too small to properly fit my size 10 shoe. A quick fix to that though would be to remove the rear upshift paddle, and use only the front paddle for gear related operations.

At the end of the day, having inched through traffic, slice between cars, carved up mountain passes, and manhandled it through all the low speed manoeuvres, there’s a feeling of connected to the Road Glide. You learn to understand the bike very quickly and where its size and heft was a cause for anxiety, you learn to manage it all using just your body and the throttle stick. Tight corner? The Road Glide asks you to simply drop its weight into the corner and pick it back up again with a quick flick of the stick. That is all it takes. 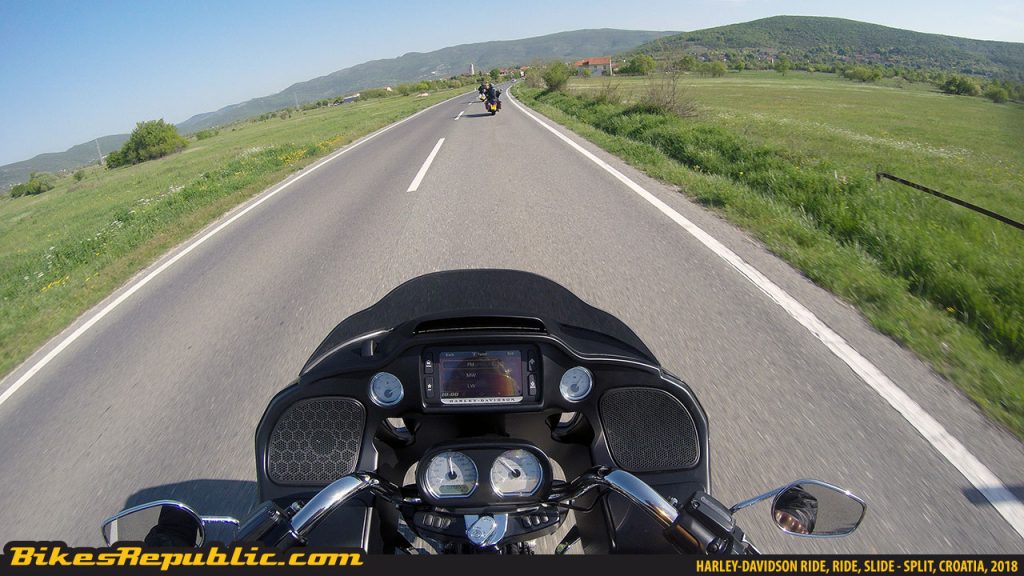 That is the Road Glide, it inspires confidence in you and makes you feel as if you know the bike really well. But it’s not unfounded, its weight becomes an ally as you learn how to exploit it in corners. The engine too plays a huge part in managing the heft and balance, but is brutish in nature when it comes to putting down power, yet gentle and smooth when you just want to take it easy.

It has been love at first sight for me and the Road Glide, and now it has turned to pure lust as I want one more than ever. Watch our video review of the Harley-Davidson Road Glide in the video above, or on our Youtube channel accessible through our link here.

But later that day I hopped on to the Street Glide and that just messed up my thoughts about the Road Glide. Suddenly the ideal bike seemed to be one that handles like a Street Glide but looks like a Road Glide.

I will tell you why in Part 2 of the review.