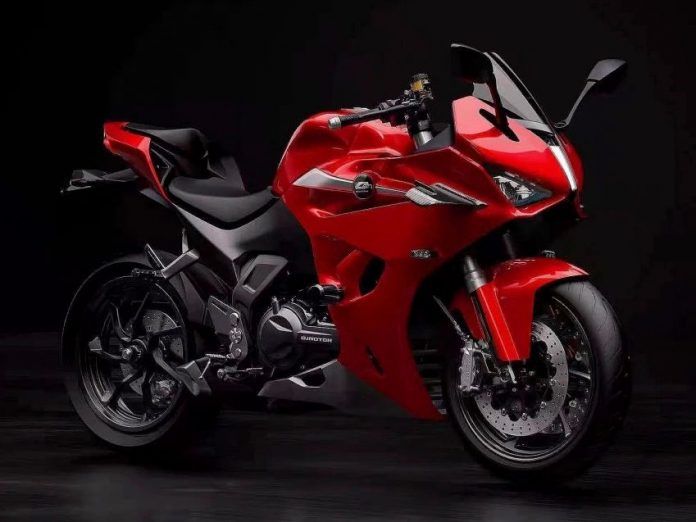 This is perhaps a direct response to rivals CFMoto’s recent introduction of the 450SR model. Say hello  QJMotor’s new and still unnamed 550cc sports bike that, more likely than not, is slated to go up against the aforementioned CFMoto rival, and perhaps more.

Obviously, what piques our interest here is that 550cc capacity figure. Credible reports suggest that this new sports model will be powered by the same 554cc parallel-twin destined for the upcoming MV Agusta Lucky Explorer 5.5.

Notably, this is also the same powerplant that Qianjiang-owned sister brand Benelli fields in the Leoncino 500 and TRK 502, albeit enlarged from 499cc to 554cc thanks to small increases to its stroke and bore. In this latter form primed in this unnamed sports bike featured, it promises 56HP and 54NM.

Despite the aggressive looks, the bike’s riding position appears rather neutral – the bars are relatively high whilst the footpegs are fairly low, ala Honda CBR500R in this respect. Like said Honda, this upcoming QJMotor offering is also endowed with upside-down front fork and twin front discs with radial-mount calipers, albeit using different OEMS – Brembo and KYB.

Whilst QJmotor is showing signs that it will offer its bikes globally, the company currently remains focused on its Chinese home market. However, with its sister brand Benelli expected introduce a new Tornado 550 somewhat soon using the same underpinnings as this, and given the Italian brand’s greater appeal overseas, it makes a tonne of sense as a worldwide sales proposition.