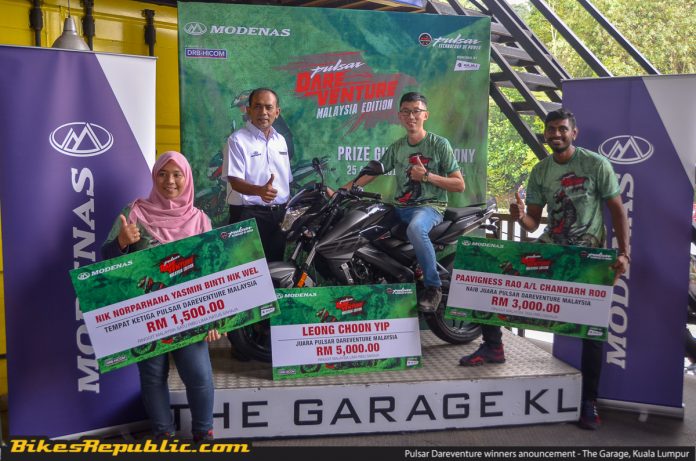 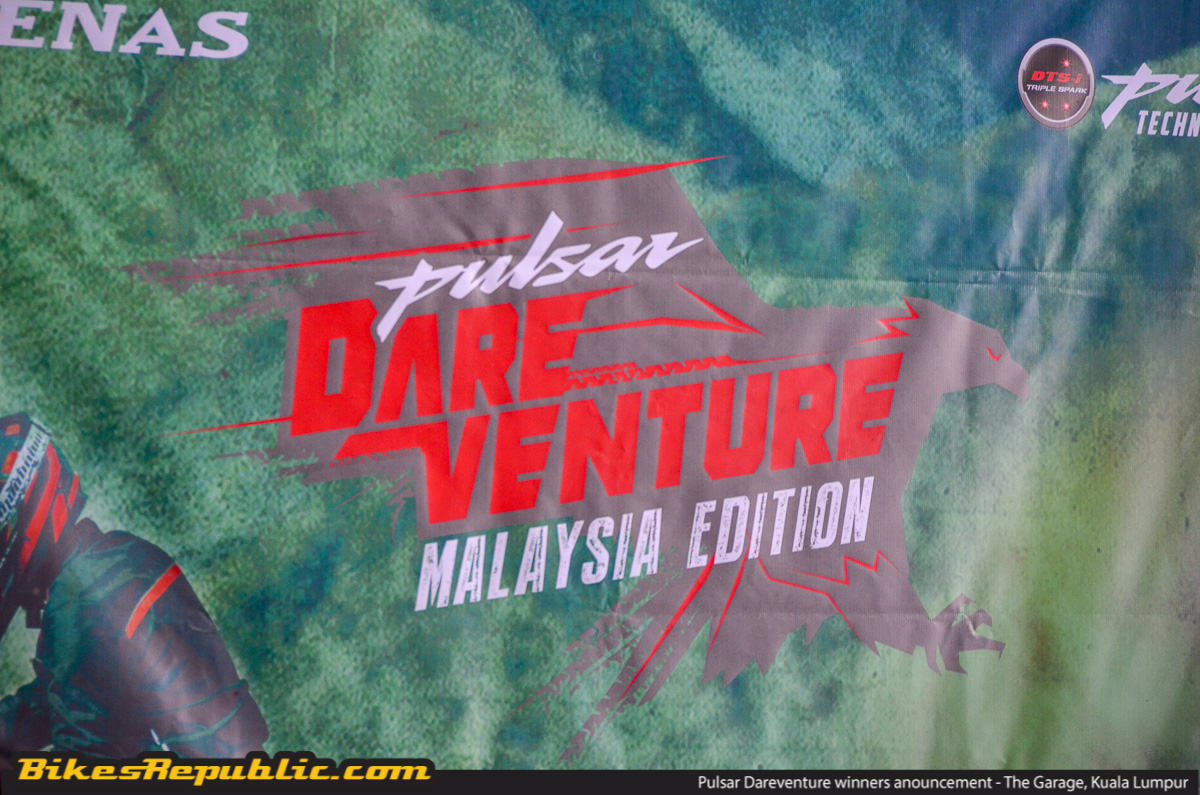 The first-ever motorcycle reality show was posted up on YouTube just two months ago by the folks from MODENAS. Stepping into new territory for the motorcycle segment here in Malaysia, the Pulsar Dareventure concluded today with the announcement of the winners for the show’s first-ever segment in Southeast Asia. 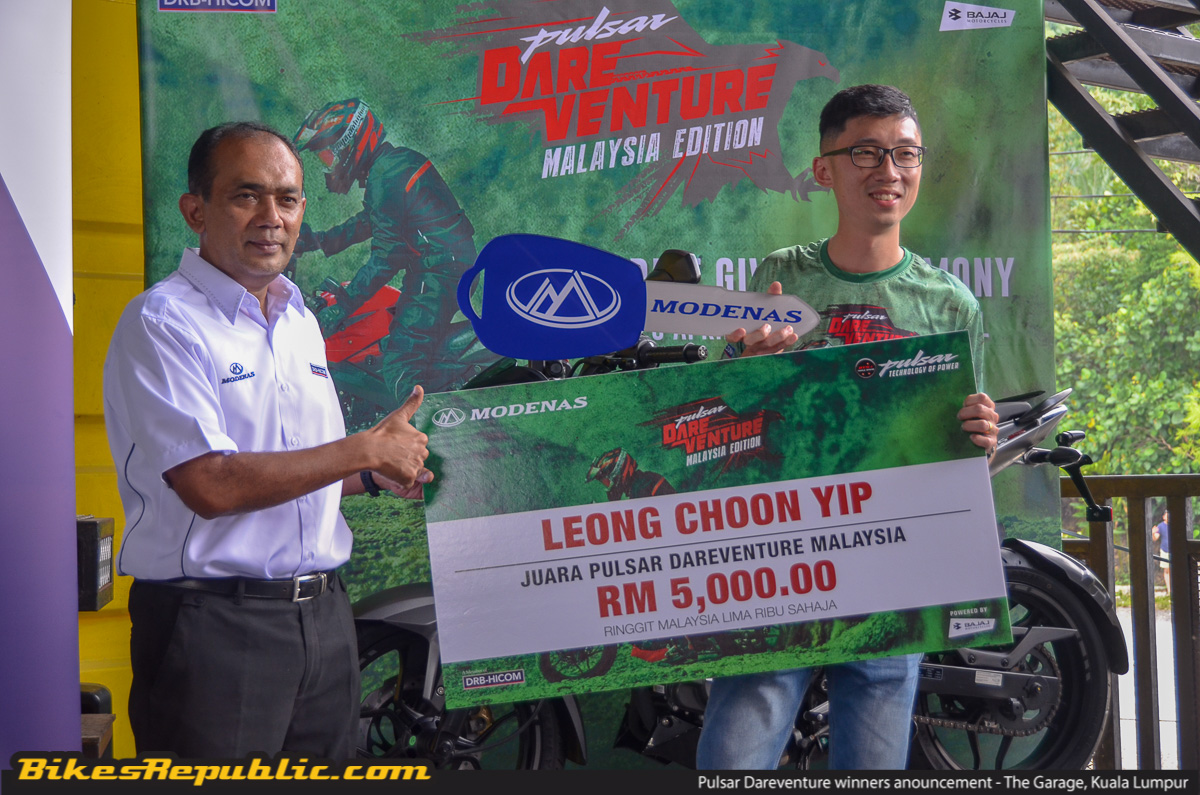 Leong Choon Yip from Puchong was crowned champion where he was awarded with a cash prize of RM5,000 and a brand-new Modenas Pulsar NS200. This very model was used in the entire production of the reality show where 10 contestants from across Malaysia tackled various tasks and challenges, but Yip emerged victorious. 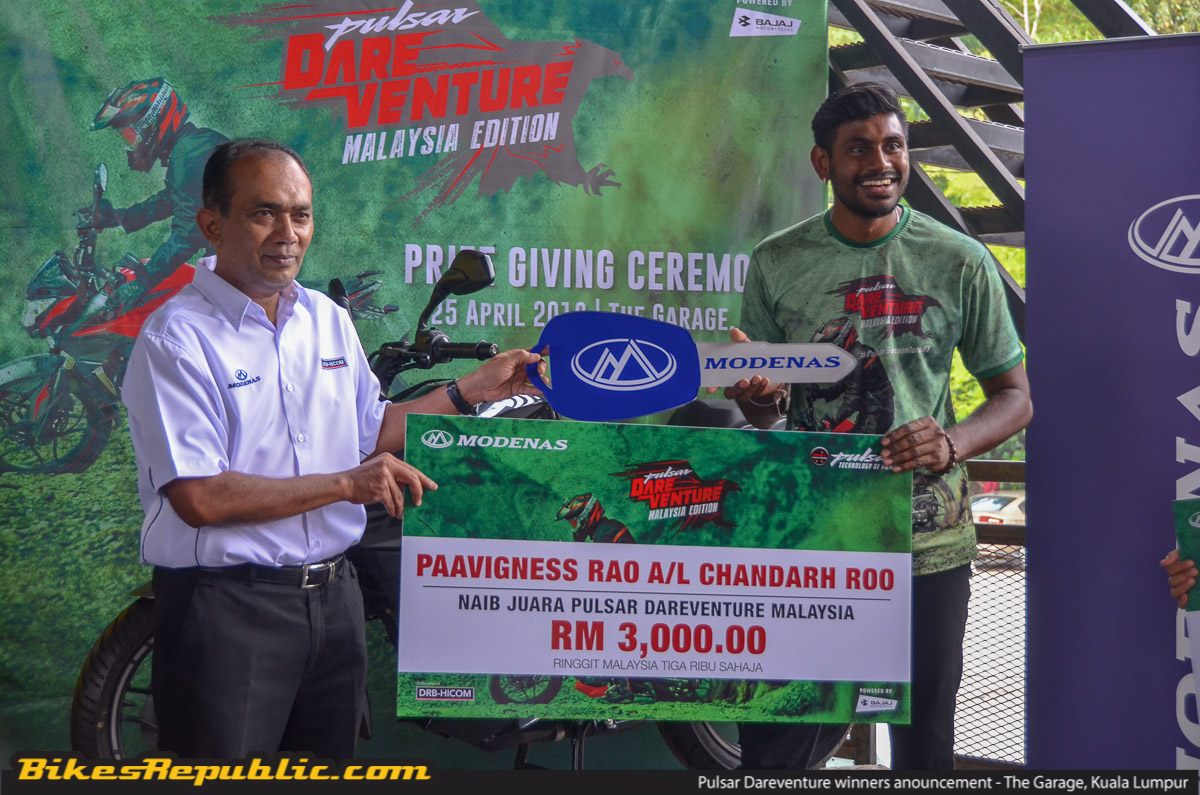 Second place went to Paavigness Rao A/L Chandarh Roo from Jempol whereas the final podium spot went to Nik Norparhana Yasmin Nik Wel from Kepala Batas, Pulau Pinang. Both of them were awarded with cash prizes of RM3,000 and RM1,500 respectively but with MODENAS being extra nice today, the also get to bring home a new Modenas V15 and Modenas Kriss MR2! 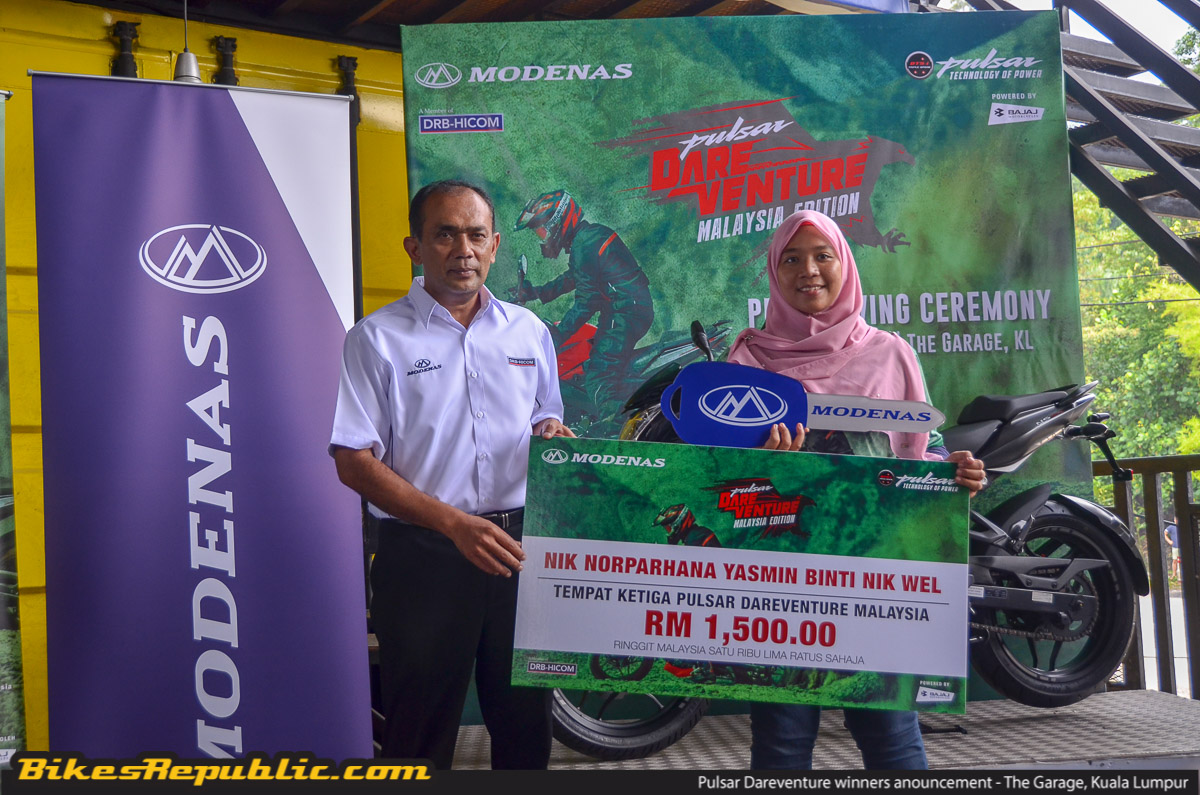 According to MODENAS CEO, Mr Roslan Roskan, “We are happy to have concluded the first-ever Malaysian edition of the Pulsar Dareventure reality show. The reality show provided a platform to showcase the versatility, durability, and power of the Modenas Pulsar NS200 while at the same time reaching out to Malaysian rider and motorbike fans through a unique and exciting competition.” 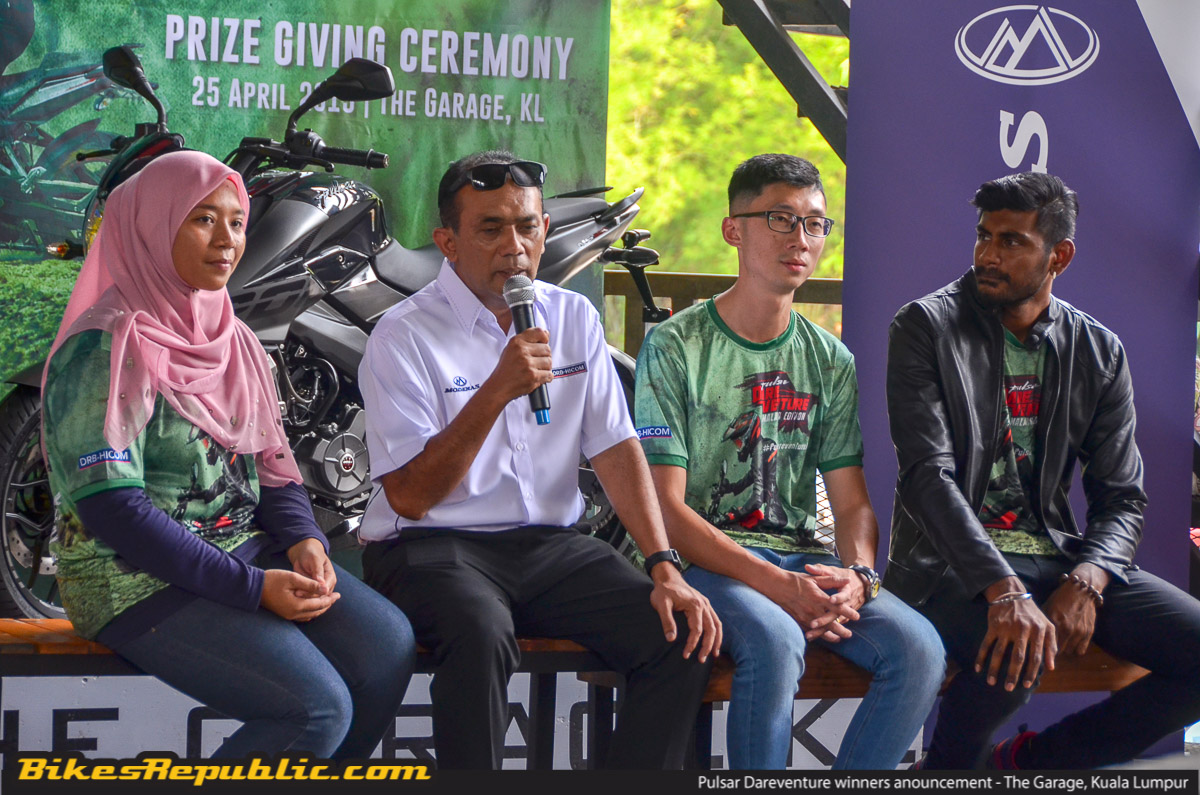 When asked about their feelings of being the winner, Yip said “I feel very excited and happy to become the first-ever winner. It feels like a dream since there were so many contestants who joined the show. The journey was extremely fun and fulfilling, and I made friend with people with similar interests along the way.” 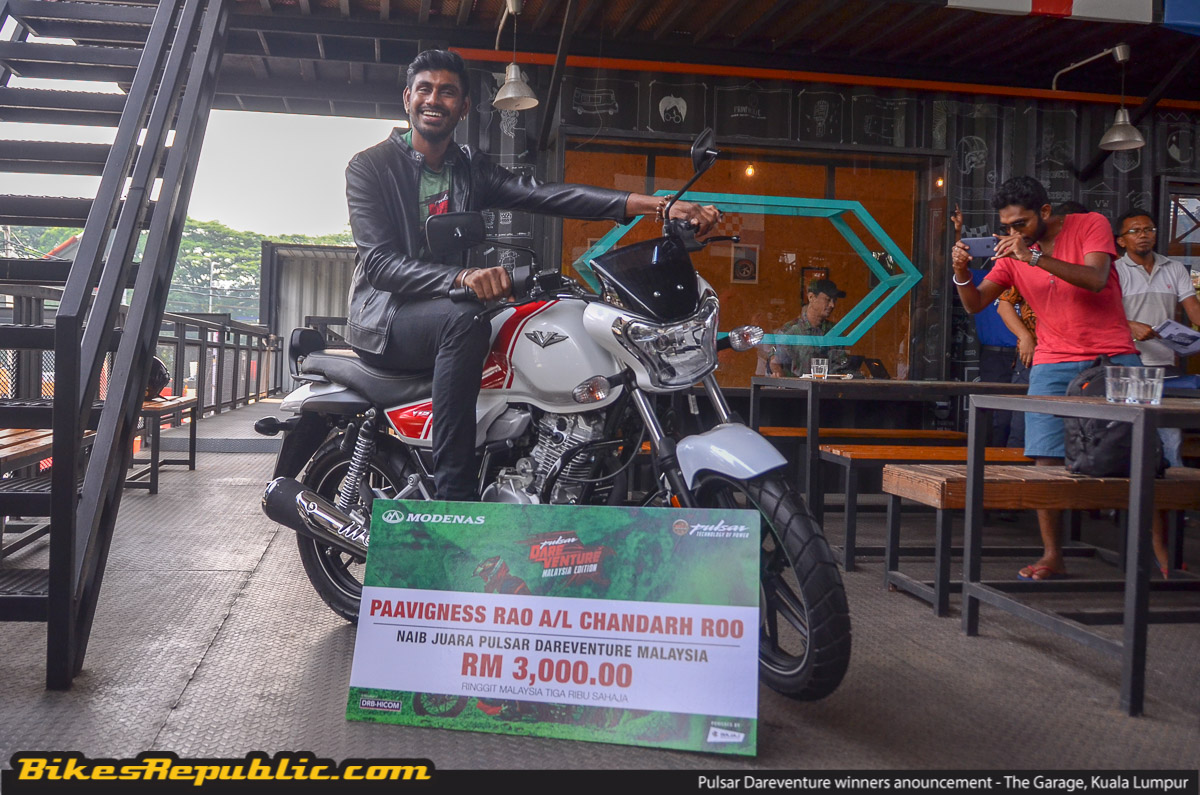 Paavigness who won 2nd place said “I was really surprised when they announced that I’ll be going home with the cash prize AND a brand-new Modenas V15. During the entire time shooting the Pulsar Dareventure show, the kept telling us that only the winner will win the Pulsar NS200 so I’m so happy and grateful now.” 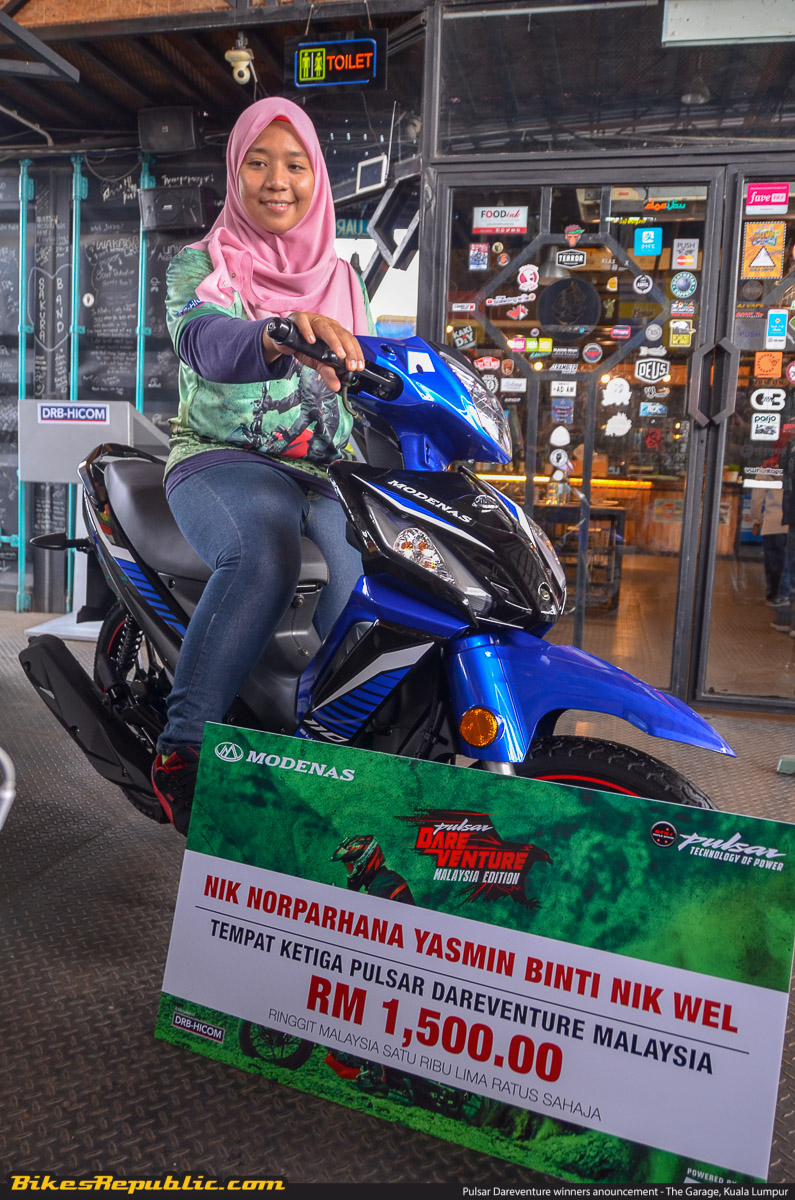 Ms Nik took home third place was the only contestant who owns her very own Modenas Pulsar NS200 which gave her an advantage across the field. She commented that “With the NS200, I felt that I could push it even further through different riding experiences and challenges that I wouldn’t normally do with my own bike. The NS200 is certainly capable of handling tough tasks and I’m really glad that I get to participate in this unique reality show.”

There are eight episodes in total of the Pulsar Dareventure series posted up on YouTube. From challenging tasks at the Speedway PLUS Circuit in Subang to running through Kellie’s Castle in Batu Gajah, Perak, you can catch them all on YouTube. For more information, head over to the MODENAS Malaysia official YouTube channel.