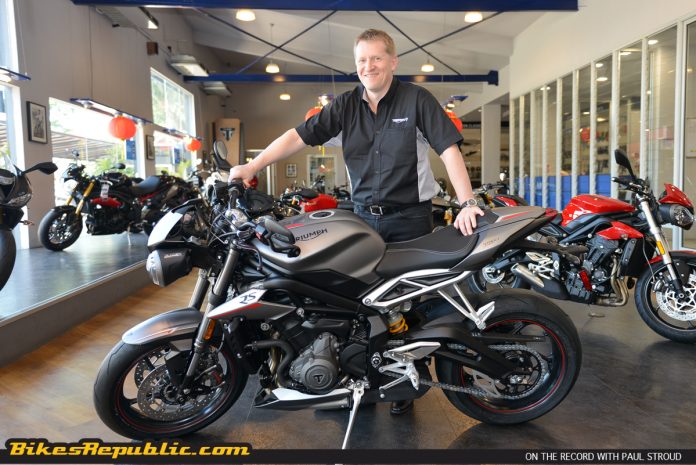 As you may already know, Triumph is turning over a new page in their storied history when all Moto2 teams start using their engines beginning the 2019 season. To come from just a handful of bikes when John Bloor resurrected the brand in 1983. to where it is now, with almost every new model winning an award or accolade is no mean feat.

If you’ve ever been to the Triumph Motorcycle dealerships in Malaysia (in Petaling Jaya, Penang, Johor Bahru, Kuching), you could tell that it all boils down to the hard work of dedicated individuals as part of a greater team to put the brand on the Malaysian and international motorcycle industry’s map. In fact, it was also due to this type of philosophy when we visited Triumph’s factory in Thailand (it manufacturers the bikes, not assemble).

But what makes Triumph tick between the principal and local distributor? When YBhg. Dato’ Razak Al-Malique Hussein, the CEO of Fast Bikes Sdn. Bhd. a.k.a. Triumph Motorcycles Malaysia asked if we’re interested to interview Paul Stroud, the Chief Commercial Officer of Triumph Motorcycles, we said “Yes” before Dato’ could finish his message. 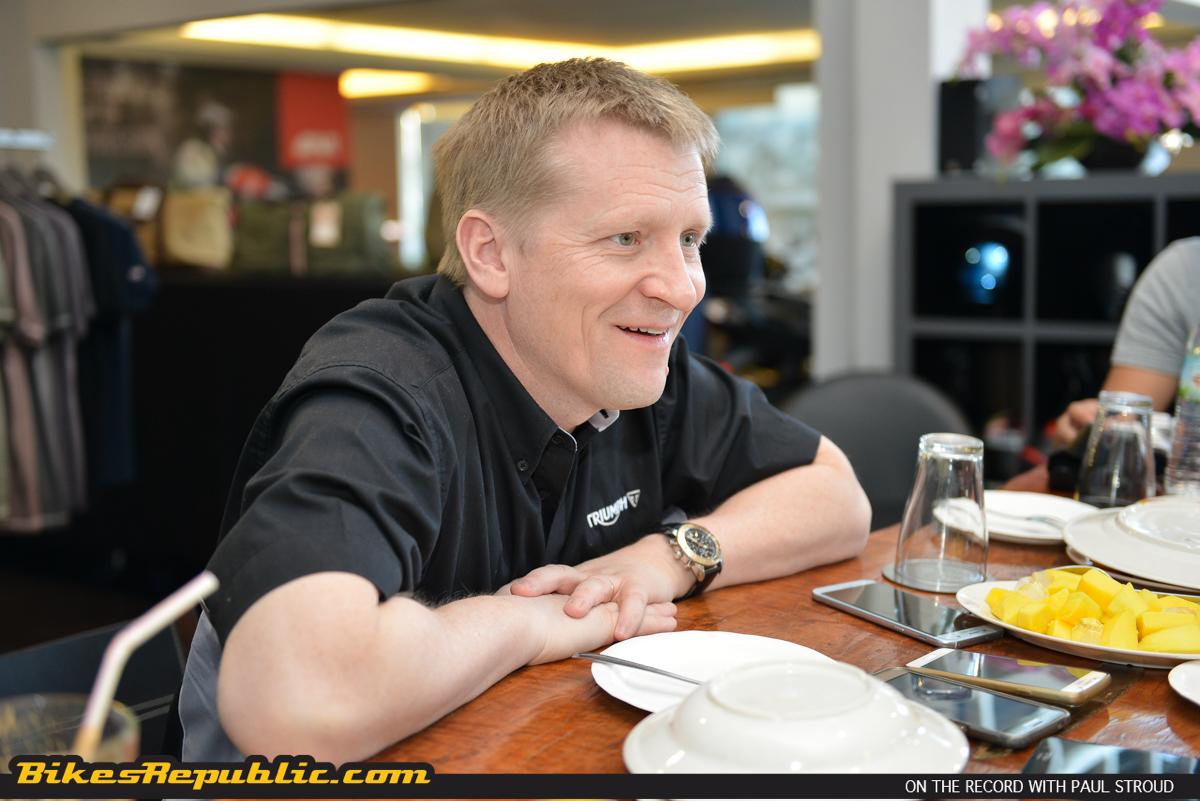 First and foremost, please refer to the link below on Triumph sealing the deal to be Moto2’s sole engine supplier, and that’s Mr. Stroud during the presentation.

Interviewer (INT): Is this your first time in Malaysia?
Paul Stroud (PS): Yes, this is my first time in Malaysia, representing the company (Triumph Motorcycles). We have a team of people including a Regional Manager who works with the rest of the world’s sales division and visits Dato’ Razak on a quarterly basis.

INT: Do you like what you see in Malaysia?
PS: Yeah, absolutely. The dealership here in Malaysia sells more than 200 motorcycles per annum so that puts it into the Top 20 internationally. They’re doing a great job and that’s one of the reasons why I’m here.

INT: What do you see the potentials in the Malaysian market?
PS: I can give you that answer in another 3 to 4 hours’ time (laughs). We’ve seen tremendous growth here. We’ve launched 19 new motorcycles in the last 2 years, and we honestly see some good opportunity for Dato’ Razak and his team at Triumph Malaysia. We already do well and it’s really about how do continue to grow our sales here in this great country. 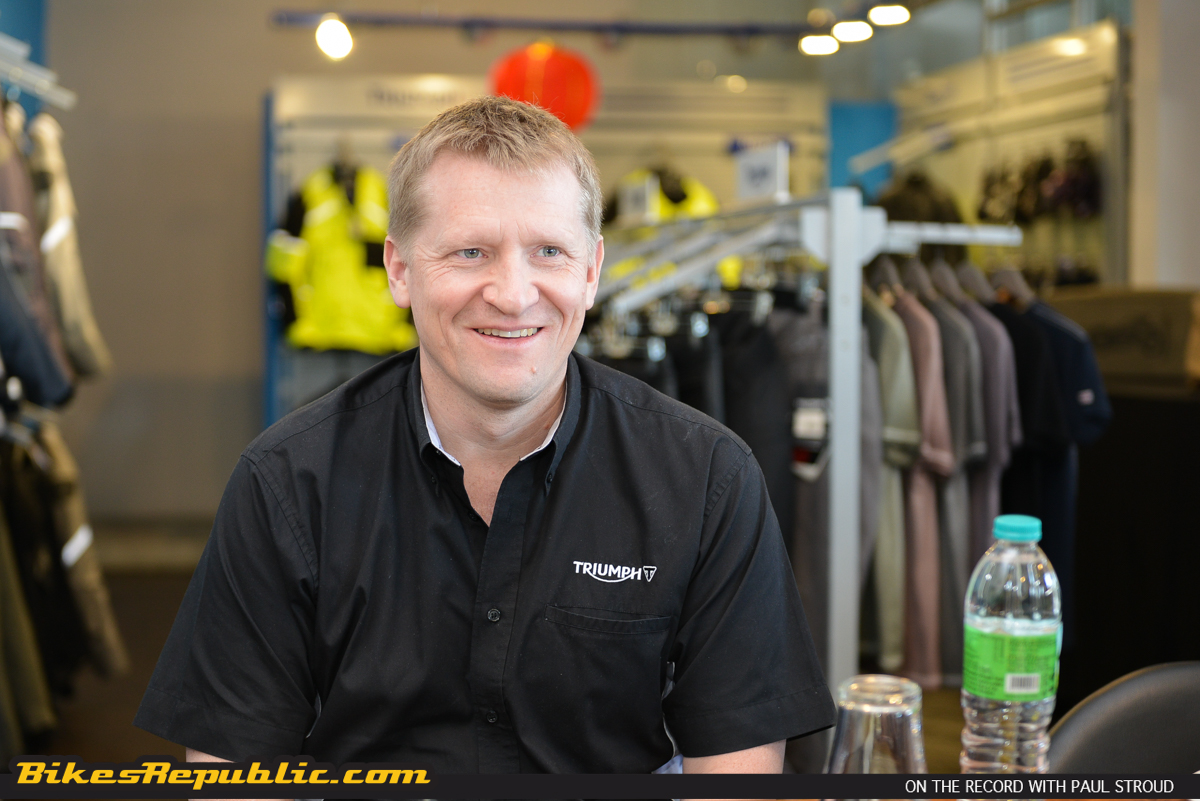 INT: What do you look forward to on this trip?
PS: The main purpose of the visit it to see the operations here, to get a better understanding of the opportunities that are open to the brand here. You can really only do that by actually visiting the country and meeting the people who are responsible for representing the brand.

Bikes Republic (BR): Triumph is working on mid-sized (400cc) bikes (with Bajaj). Do you see a potential for those in Malaysia?
PS: Ultimately there’s opportunity but it’s very, very early in the development of that strategic partnership, so until we’re much further through… we’ve just signed the contract with Bajaj; we’ve signed the letter of intent, we’re working through the contract with them and then we’ll start to understand the opportunities for Triumph motorcycles made by Bajaj outside of India.

BR: Now that Triumph will be the exclusive engine supplier for Moto2, will that bolster Triumph’s sportbike family?
PS: The sportbike market has been coming down since the recession and now internationally represents a very, very small part of the market, so I don’t see, honestly, our relationship with Moto2 effectively, genuinely, influencing the growth of that segment. But more interesting for Triumph is that it will take Triumph to a whole new range of customers who just don’t know about us today. We have great bikes like the Street Triple, Speed Triple, supersport motorcycles and without question our relationship with Moto2 will put those bikes on the map. That’s really exciting for us, to be honest, because we are have great bikes; we just need to tell more people about them. Our relationship with Moto2 will also give the bikes a whole new level of credibility and will give us exposure to a completely different customer grouping. 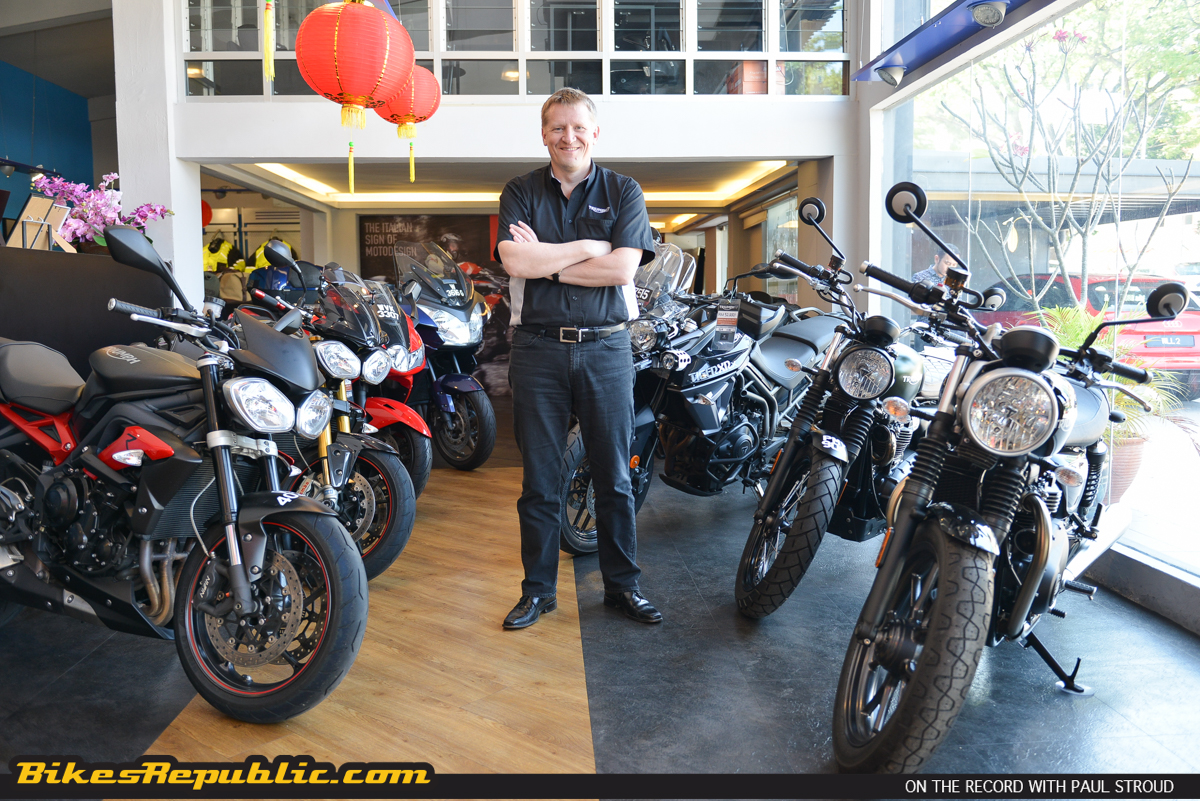 INT: Will Triumph ever be involved in MotoGP too?
PS: It’s difficult to predict that but what I can share with you is the dramatic increase in traffic to our website when we announced the relationship with Moto2. Our website traffic, specifically to the Speed Triple over the weekend increased by more than 30%. On the Street Triple sales year over year, are up by 13-14%. It’s too much to connect these dots but it will certainly a lot of interest to the Triumph brand.

BR: With so many models being launched, is the production capacity being upgraded?
PS: We have two centres of production – we’ve got one in Thailand, and one in our headquarters in the UK. We’ve plenty of capacity to support the growth of the Triumph brand. The overall production has increased in both plants because fundamentally the production is relative to the motorcycles that we produce in each of the plants. In the Thai plant we produce all the Bonnevilles, the Street Triples, and also the Tiger 800. Those models are growing and therefore production within Thailand has grown but over in the UK we’ve just launched the new Speed Triple, Tiger 1200 and therefore our production volume is also growing.

Dato’ Razak added at this point, “Triumph is very responsible. Their manager will come and visit us at least three times a year. It augurs well for the brand and customers, actually because there’s a real interest in how we are doing and how they can help us move forward, rather than just sell number; and now we have a very welcomed visit by Paul.” 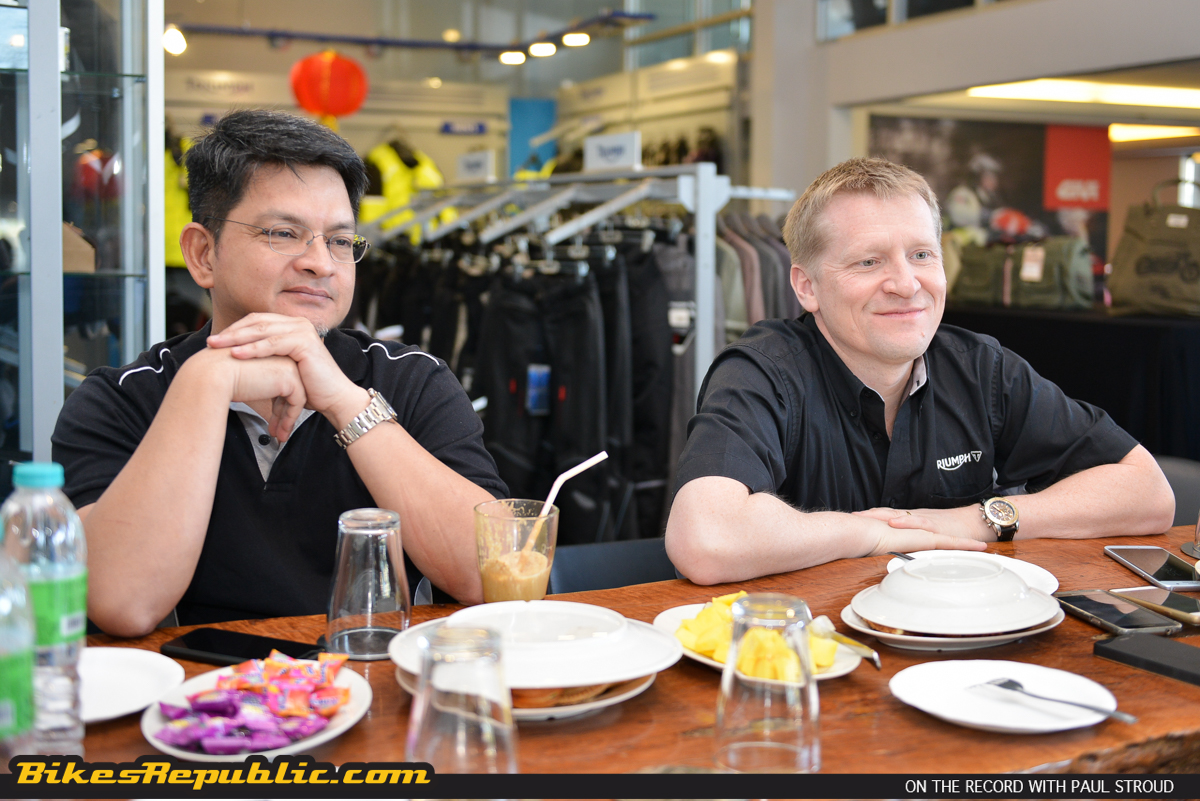 INT: Are there any plans for Triumph to develop a bike based on your participation in Moto2?
PS: In fairness of respecting the contract between Triumph and Dorna we’re really not allowed to do anything other than just to talk about our relationship but be sure that fundamentally we’ll be very proactive in promoting our support and engine supply to the championship.

INT: Is there a plan to run an official Triumph Moto2 team?
PS: No, there’s no benefit in doing that because fundamentally our engine powers all of the grid. To be honest, if we have a team in the championship, other teams may question us why that was the case.

BR: How involved in Triumph Motorcycles (UK HQ) in working together with the distributors in different countries, in terms marketing, branding?
Dato’ Razak: The kind of support we’re getting from Triumph is more than I would’ve imagined. We have a manager who’s interested to know what the market is like other than just pushing numbers. If Triumph were just pushing numbers I don’t think we’ll be sitting here today and chatting further because it’s an entire experience. This is the kind of support Triumph gives us.

In terms of marketing, of course we would like to see more brand awareness globally which they have taken a step forward with Moto2. That’s a major step forward and people are starting to ask about Triumph. So, that’s a major step forward but when it comes to where they (Triumph UK) are the competition is a lot bigger. You’re talking about an EUR80 billion company, for example, which we are taking on. We are taking on a company which is generating EUR80 to 90 billion a year – their marketing budget is huge. We can’t expect to get the same kind of marketing exposure, but we do our best, and I think what’s coming up from Triumph right now is more than what we expect and hopefully it’ll be more than what we expect (laughs). 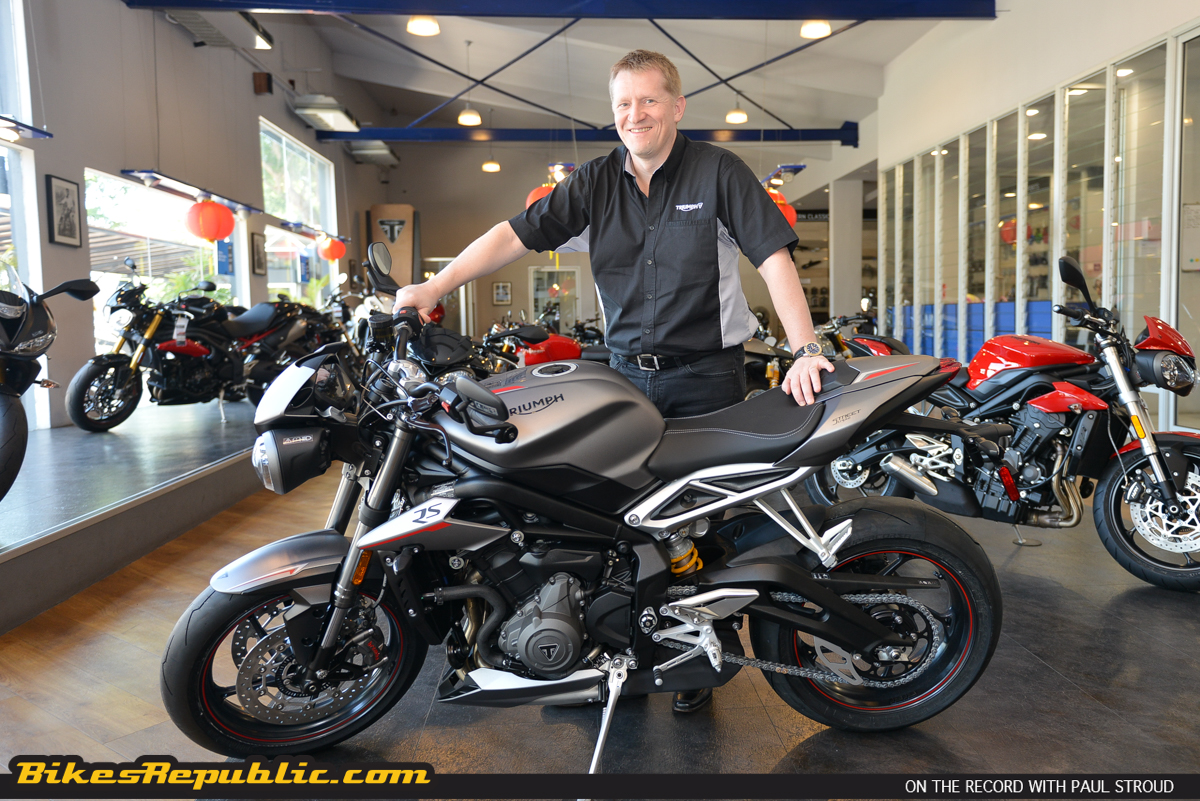 PS: Just adding to that, the direct national contact works with Dato’ Razak and his team to try and help and facilitate, to move the brand, grow the brand in Malaysia. Also importantly to ensure where there are questions, where there are challenges, and that the company responds quickly to those challenges. The organization is here to support everybody within the team.

Looking from Dato’ Razak’s perspective is what’s critical to him. One form of support is that he has a constant stream of fantastic motorcycles from which to develop his business. As I’ve said earlier we’ve launched 19 new motorcycles in the past 2 years and I can’t keep up with all the 5-star reviews. Just recently we launched the (new) Tiger 800. That motorcycle had 5-star review after 5-star review. The Speedmaster, we just launched in California, that motorcycle (also) had 5-star review after 5-star review. The Tiger 1200 – they are Press in Europe that’s not in the UK –  I’m hastened to add, found that motorcycle as the equal to the BMW R 1200 GS. So, that’s what we also bring to the partnership because that’s incredibly important because that gives ourselves a product platform which to grow and give our customers a wonderful experience. 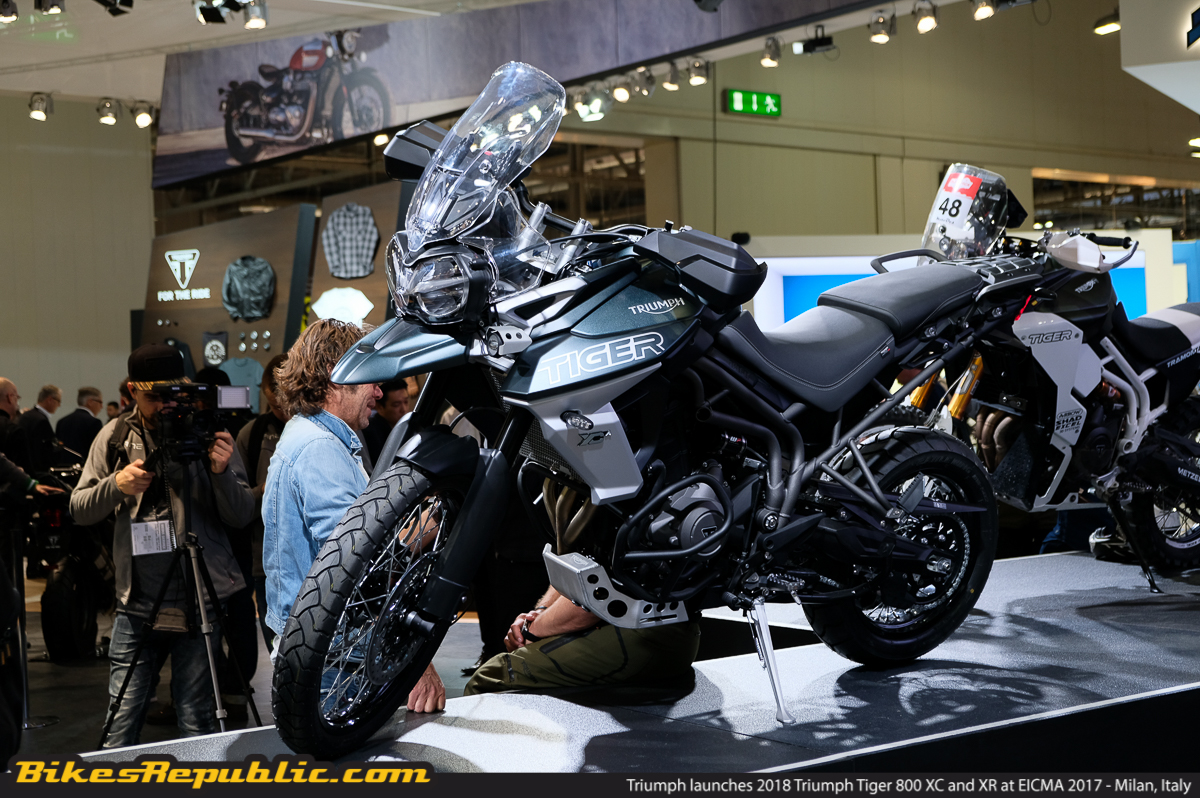