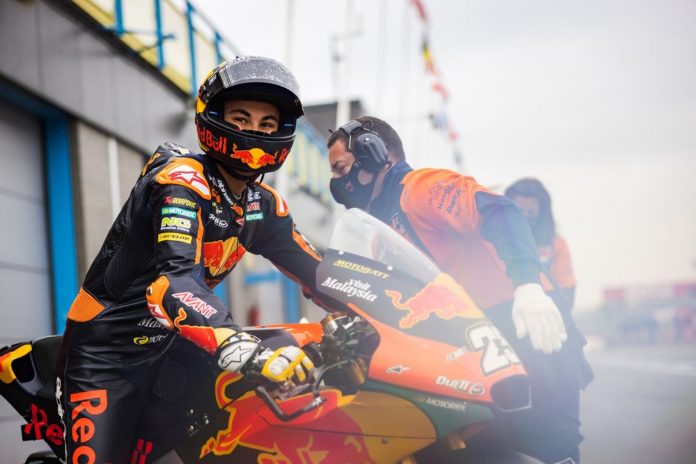 Raul Fernandez will race in the premier class next season with Tech3 KTM, thus ending all the speculation regarding his future.

The announcement was made live during the FP4 session at the Styrian GP on Saturday.

Fernandez will teamed-up with his Moto2 compatriot, Remy Gardner, at MotoGP under the guidance of Tech3 boss, Herve Poncharal.

“We are delighted, proud and excited to welcome Raul Fernandez next to Remy Gardner.

“I think it’s going to be a very exciting 2022 season with the two of the brightest talents of the Moto2 category moving to the premier class,” expressed Poncharal.

Fernandez and Gardner will replace Iker Lecuona and Danilo Petrucci, who is yet to confirm their sit next season.

“I’m pleased with this opportunity from KTM, as much for this year as for the next.

“I’ve been learning a lot and enjoying Moto2 and was able to get into a position where I have this chance to enter MotoGP and for which I’m very grateful.

“It’s the dream of any rider to arrive to this class,” said Fernandez.

Fernandez was earlier linked with a move to Petronas Yamaha Sepang Racing Team (SRT) with both Razlan Razali and Johann Stigefelt had expressed interest in the Spanish talent.

However, reports suggest that the Malaysian-sponsored team would have to spend in order to lure the 20-year-old who still has a remaining contract with KTM.