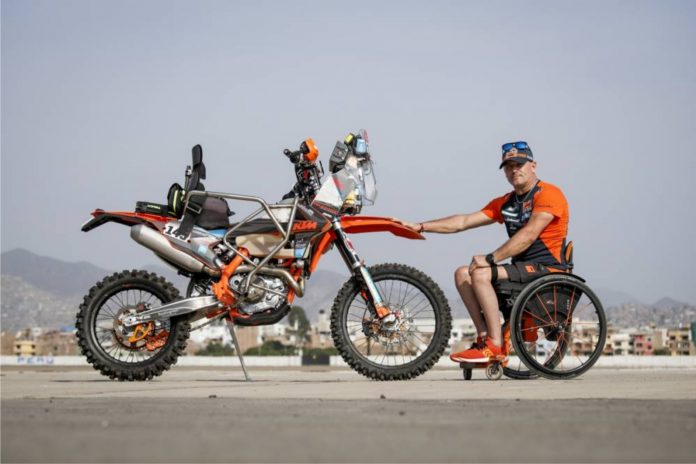 We know how tough the Dakar Rally is on able bodied athletes, but Nicola Dutto is out to prove to himself that a paraplegic can compete in the event.

Dutto was the 2008 and 2009 European Baja Champion. Unfortunately, a crash in the 2010 European Baja in Italy left him paralyzed.

But he bounced back to race in the 2011 event in a Polaris buggy. Yet he knew that there was nothing like the man and machine synergy of riding a motorcycle. He experimented with roll cages to protect his lower body. Entering Spain’s Baja Aragon four months later, he finished 24th.

This achievement inspired Dutto to compete in the Dakar Rally as the first paraplegic.

To help with his disabilities, Dutto made a number of modifications to his KTM 450 EXC-F. The clutch is electric, and the rear brake lever is moved to the handlebar. wheelchair cushion specialists Vicair build a seat for support. Dutto needed protection from the punishing shocks as he is unable to stand up while off-roading in rough terrain. A roll cage is fitted to protect his lower body, while his legs are secured with a three-point harness.

However, Dutto needs to rely on his team to ride effectively. It consists of his one-time rivals Julián Villarrubia, Pablo Toral and Victor Rivera. One rider will ride ahead to scan the terrain and be Dutto’s spotter when he stops. The other two riders will help to pick Dutto up in case he falls.

Dutto is still going strong at the end of the Dakar 2019 Stage 2. Let’s look out for this extraordinary rider and his team.