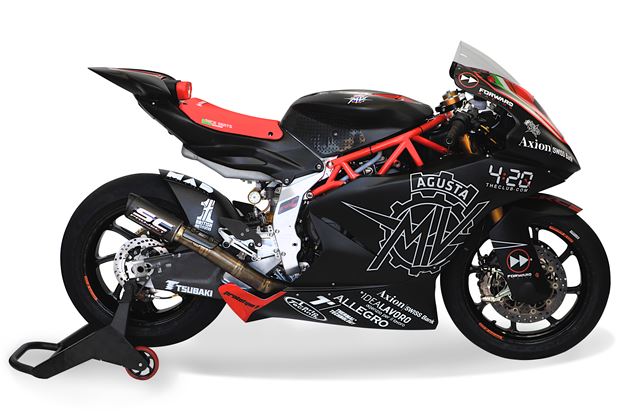 This is the first official image of the MV Agusta MotoGP race bike slotted to make its debut in the Moto2 series of 2019.

Previewed on the official MotoGP website, the Forward Racing Team will race the MV Agusta with support from the Italian factory.

This is not the first time that MV Agusta will be racing in Grand Prix motorcycle racing, in fact, MV Agusta still is the most successful European motorcycle manufacturer of all time with a total of 75 world titles between 1952 and 1974.

Let that sink in for a while.

Check out the official video from the Forward Racing Team as they work on their new race bike.

MV Agusta, which stands for Meccanica Verghera Agusta, was founded in 1945 in Cascina Costa, Italy.

If you’re wondering, Meccanica means Mechanic in Italian, Verghera is the hamlet where the first motorcycle’s were made. And Agusta was originally an aviation company which was formed by a certain Count Giovanni Agusta in 1923.

Just like Ferrari, MV Agusta originally built road bikes solely to fund its racing efforts. The company won the first race it participated in 1948, and it all went up-hill from there.

The company was known to build the best racing bikes in the world, and spared no expense in its passion to pursue the ultimate race bike.

Soon customer teams lined up to buy a MV Agusta, and this boosted the factory’s profits and gave them more money to build better bikes.

In 1957, Italian motorcycle manufacturers Gilera, Moto Guzzi and Mondial had agreed to withdraw from GP racing due to its escalating cost. MV Agusta too had earlier agreed to withdraw, but ended up racing anyway. The company went on to win 17 consecutive 500cc world championships.

When Count Domenico Agusta, son of the founder who had died in 1927, died in 1971, the company is said to have lost its direction. MV Agusta won its last GP in 1976 and completely withdrew from racing in 1976. And it was all downhill for the company from there, until it was resurrected by Cagiva in 1991. The rest as they say, is history.

Here’s hoping the iconic Italian brand comes back to its winning ways and finds it way up to MotoGP.