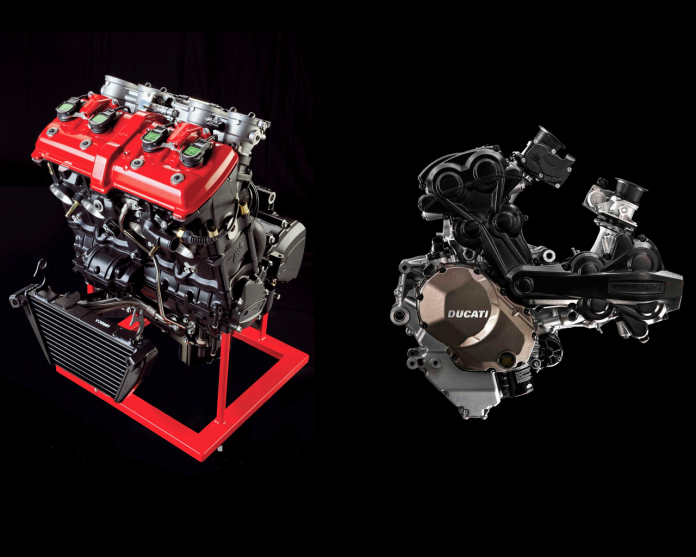 A guide to understanding multi-cylinder vs V-twin engine types, and perhaps answering the age old debate of which is best.

This week, we’ll explore the age-old question of multi-cylinder vs V-twin engine types. But before we dwell deeper into that, here’s a few thing you ought to know about both. 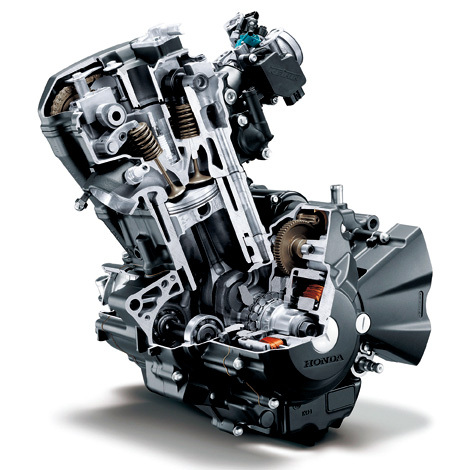 Nearly all motorcycle engines (except the electric ones) make power by generating pressure in the combustion chamber, which then pushes the piston down the bore. The bigger the area of the piston, the more shove that gets generated for a given pressure.

The amount of pressure generated is normally dictated by a few factors but ultimately it is dependent on the amount of fuel/air mixture that is available to burn. The bigger the size of the inlet valve(s), the greater the potential for stuffing the combustion chamber with fuel and air.

The maximum valve size is inevitably dictated by the size of the cylinder head due to the physical parameters. Given that these two factors are critical, it is apparent that the more cylinder cross sectional area available, relative to capacity, the greater the potential to make power. The cross sectional area is directly related to bore dimension because all cylinders are round. Except for the cool NR 750 Honda (pictured) made years ago which had oval type pistons. 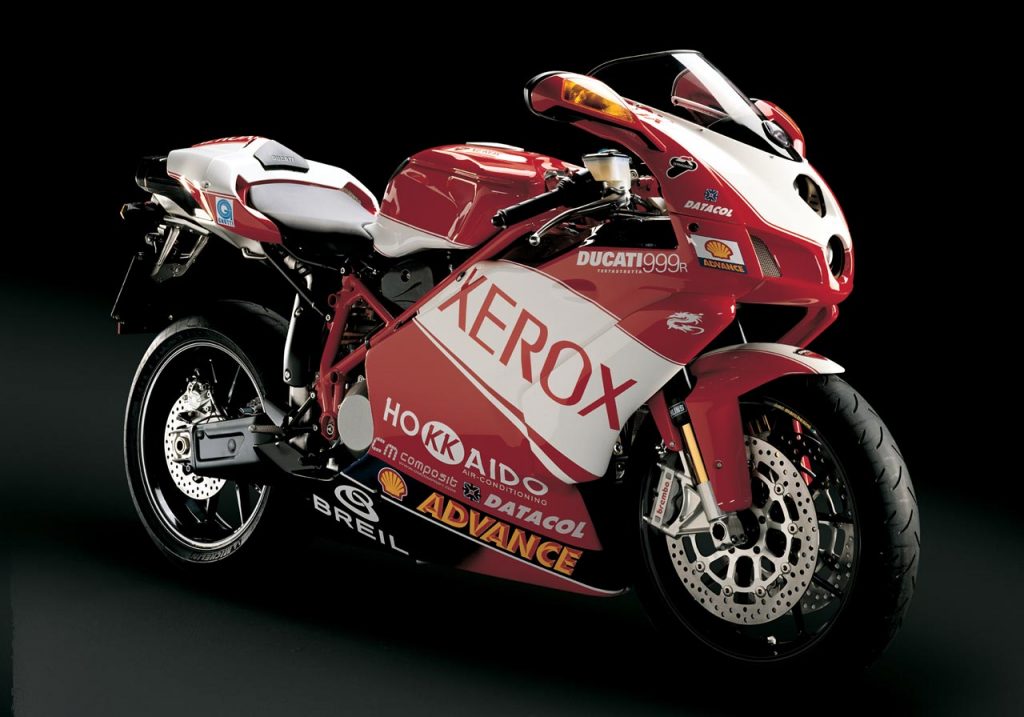 If we compare like for like capacity, Ducati’s old final one-litre super bike engine, the 999 (pictured), had a bore diameter of 104mm, which gives a total bore area of 170cm2 for its two cylinders. 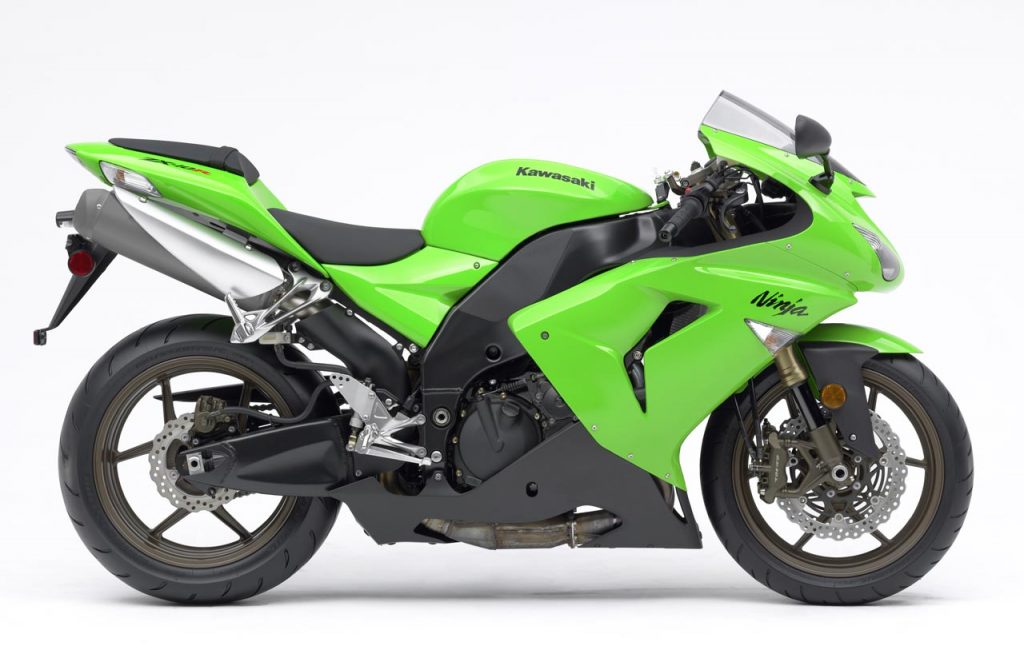 The Kawasaki ZX-10R of that same vintage had four 76mm pistons which gives it a total bore area of 181cm2. 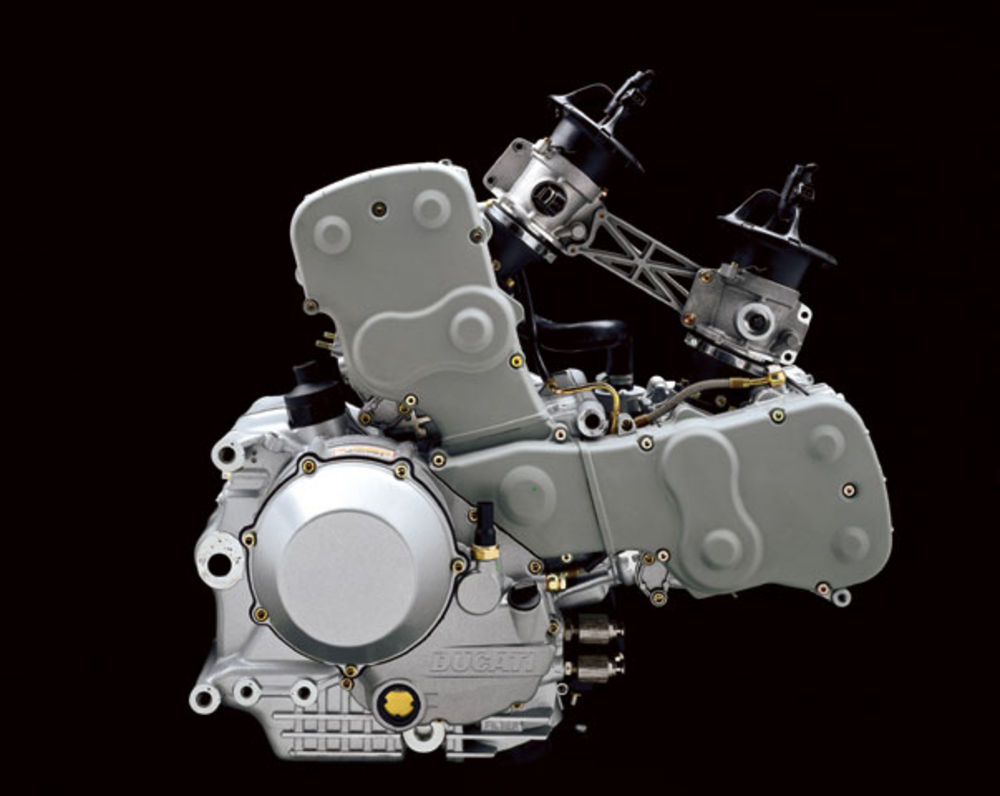 It is a similar story with the inlet valves, the Ducati’s four 42 mm inlet valves providing 55.4cm2 of valve area, which is significantly less than the 60.4cm2 that the Kawasaki gets from its sixteen 31 mm valves. It is the twin’s less efficient breathing that prevents it matching the top-end power of the multi, which was Ducati’s argument for a 200cc capacity hike back then in WSBK racing. As a result, twins have to achieve their greatest efficiency at lower engine speeds as compared to fours. 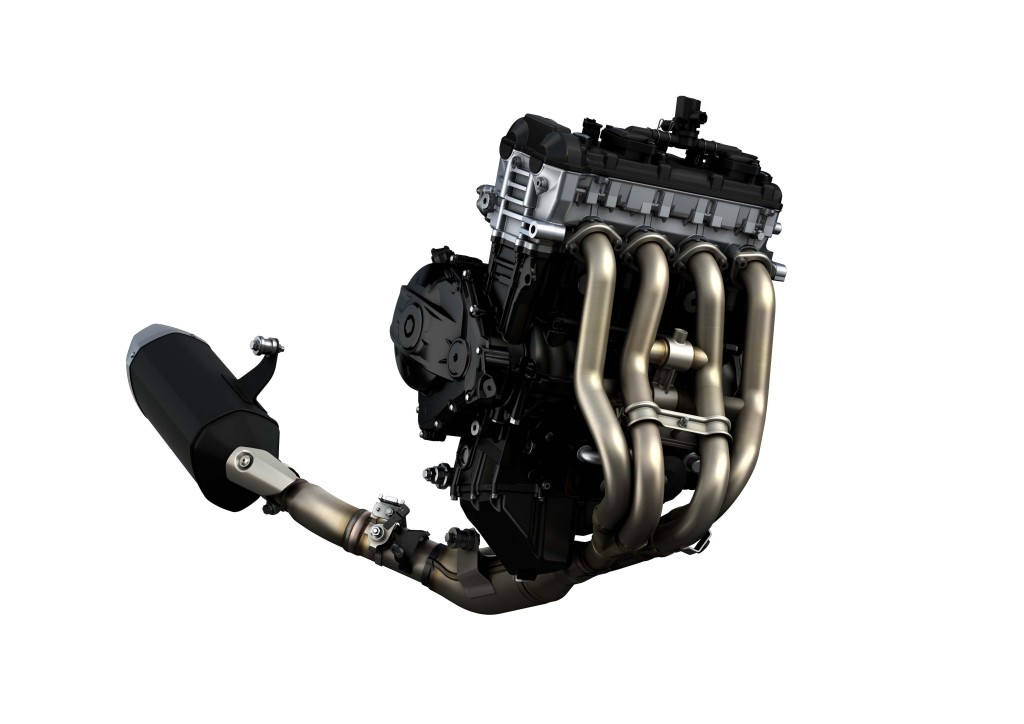 Torque, is a measure of engine efficiency and twins tend to be more efficient, or torquey, through their midrange. Because of their superior breathing, shorter strokes and lighter pistons, the four-cylinder engines can rev higher, inevitably generating much more power at the top-end. Their torque figures may indicate slightly less efficient combustion but remember, it is occurring more often. 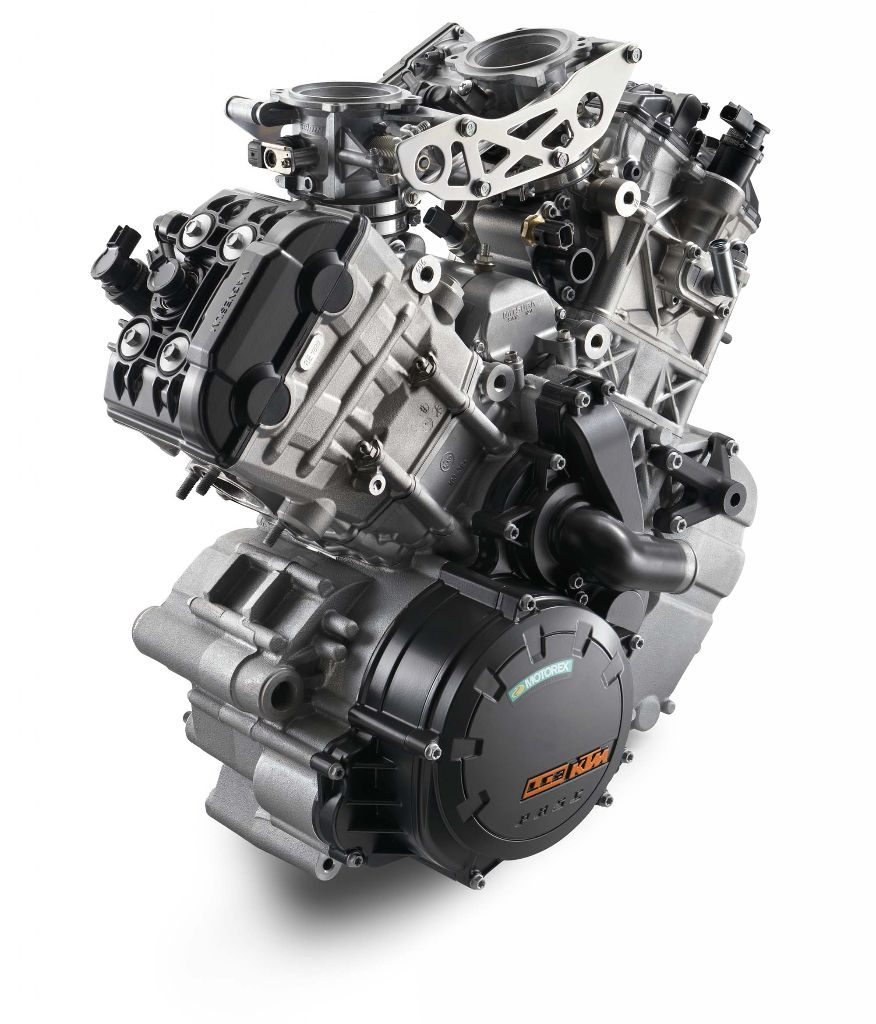 Now this brings us to gear ratios. V-twin engines produce their peak power and torque at lower engine speeds than four-cylinders. They must turn the rear wheel further for each engine rotation to achieve road speeds equivalent to those of a four-cylinder machine.

For any given increase in road speed, a multi will gain more revs than a twin. It is the twins’ apparent ability to gain speed with fewer revs that creates the impression of greater ’punch’, or the elastic band sensation aficionados never get tired of.

The way the two engine types deliver their power also has a dramatic influence on feel. Imagine a 90-degree V-twin and an inline four side-by-side accelerating. The twin is running at 10,000 rpm and the four at 12,000 rpm. The four squeezes one of its power pulses to the rear wheel for each half rotation of the crank. This occurs every two and a half thousandths of a second, with the bike making 100mm of progress with every combustion. (Assuming it’s a 180-degree crank and firing order). 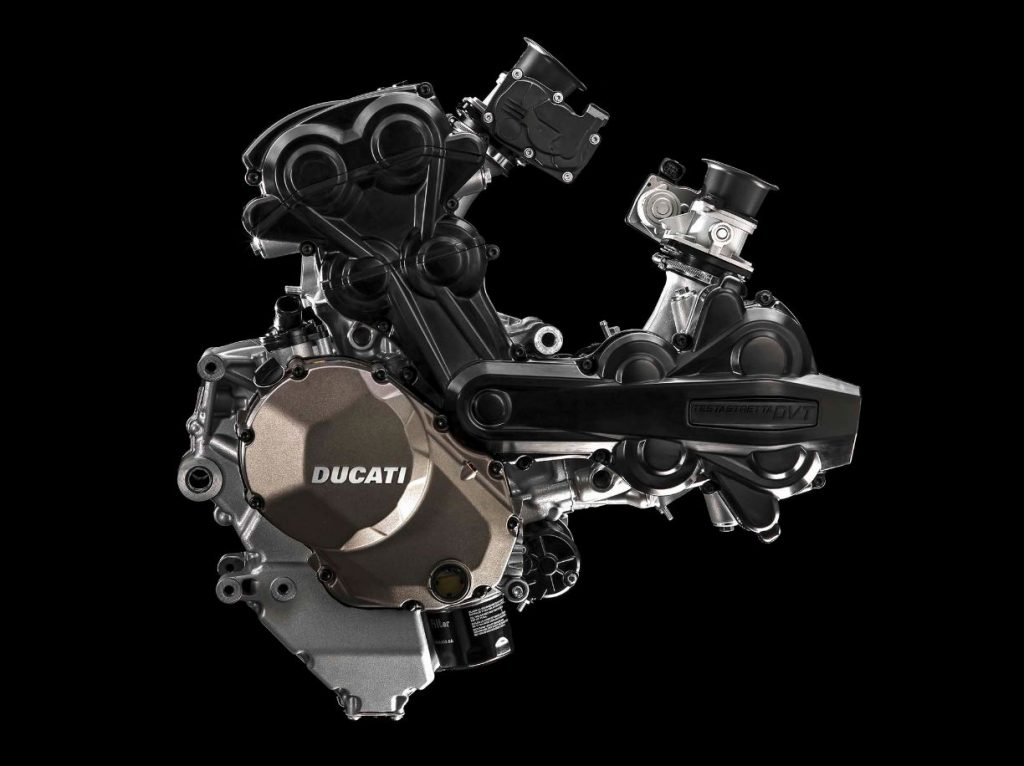 The 90-degree V-twin, with its 270-degree and 450-degree firing sequence is delivering its bigger pulses at 180 mm and 300 mm at a more relaxed four and a half and seven and a half thousandths of a second.

I personally, do not ride close enough to the edge to add any objective opinion to the ongoing debate over the effect of engine configurations and firing orders on grip levels and tyre wear. However, given that riding on the limit is as much about feel and confidence as engineering and physics, I do understand why a V-twin which when operating at frequencies, the rider may be better able to perceive as to why the twin would have the edge over the multi once the human psyche is taken into account. 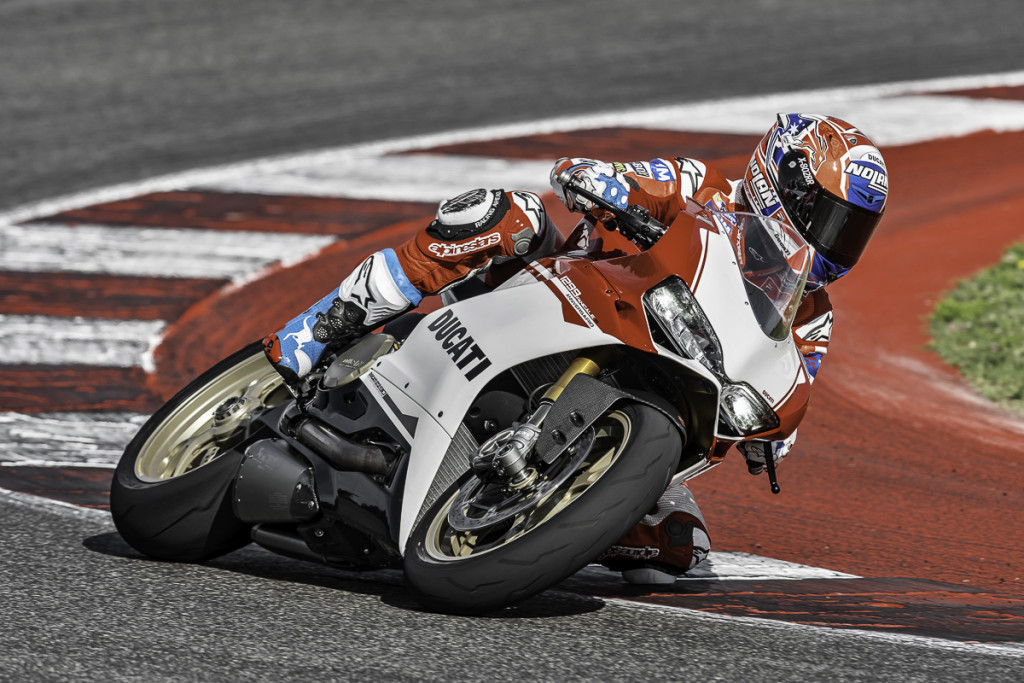 There are more esoteric reasons why twins grab at the rider’s heart. The inline four smacks of common sense and of being a universal consumer product. Due largely to an association with a certain Italian marque, V-twins are somehow regarded as exotic.

Having an engine strapped in-between your thighs makes it a very personal affair. The twin is generating explosions with around twice the ferocity of a multi, and is usually backed up by an induction rumble that leaves the rider in no doubt of all the mayhem occurring in his loins. The multi then, relies on the consequence of its work to bring the thrills.

Have a safe ride everyone and keep the wheels turning.