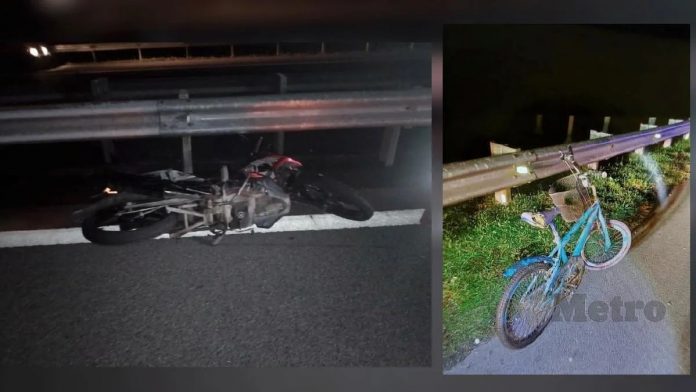 Motorcycle rider killed after colliding with bicyclist travelling along highway emergency lane, causing the victim to fall into path of oncoming car.

A motorcycle rider was killed after an apparent collision with a bicycle, which caused the victim to fall and subsequently get struck by an oncoming car.

According to local daily Harian Metro, the incident occurred last night around 7:50PM in Bagan Serai, Perak, specifically along Kilometre 198.2 of the North-South Highway heading north.

Initial investigation revealed that the motorcycle ridden by the victim, who was heading towards Semanggol fom Kamunting, believed to have collided with the bicycle in the emergency lane ridden by a man whose identity remains undisclosed.

“As a result of this collision, the victim and the motorcycle fell and slipped into the left lane. At the same time, a car travelling from the rear tried to avoid the victim but failed and hit the victim. The victim was pronounced dead at the scene and the body was sent to Parit Buntar Hospital for autopsy,” said Superintendent Mazuki in a statement.

According to him, the investigation of the incident is still underway and police are still trying to ascertain the bicyclist’s motive for travelling along the highway emergency lane. The case is reportedly being investigated in accordance with Section 41 (1) of the Road Transport Act 1987.