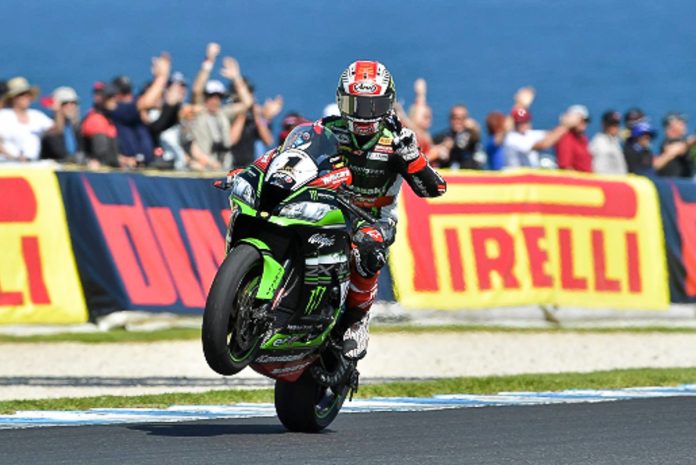 Rumours have been floating around regarding the effort of trying to lure WorldSBK champion Jonathan Rea to join Suzuki in MotoGP.

With Team SUZUKI ECSTAR’s current star rider Andrea Iannone not performing as they had hoped, Dorna and Suzuki are said to be in talks in trying to pull in the WorldSBK World Champion.

If the transfer is successful, there’s a huge possibility that Suzuki will be able to fight against other factory teams as well as making the WorldSBK competitive again for other riders.

The last MotoGP round was full action, drama and action despite the exclusion of nine-time World Champion, Valentino Rossi from the Movistar Yamaha squad. It was yet another unfruitful race for Team SUZUKI ECSTAR as their supposedly number one rider Andrea Iannone had retire after 12 laps in the rain.

This time around, it was quite an unbelievable reason as on why the 28 year old Italian had to stop his race efforts. According to Iannone himself, it seemed that his rain suit which he wore over his racing suit was too tight. That led to problems to his arm pumps which resulted in extreme muscle pain.

This is something that both the Suzuki MotoGP factory team and Dorna themselves weren’t really impressed with. This led to a huge rumour floating around that both parties are trying to lure one of the biggest names in the World Superbikes today that is Jonathan Rea of Kawasaki Racing Team.

With more wins and a super comfortable lead in this year’s WorldSBK season, Jonathan Rea has been the dominant force on board his Kawasaki ZX-10RR. The past weekend in Portugal saw Rea took yet another double win. Out of 20 races in the past 10 WorldSBK rounds, Rea has stood on top of the podium 11 times so far.

This has caught the attention of both Dorna and MotoGP in trying to make Suzuki more competitive against other factory teams as well as make WorldSBK competitive and exciting again. The domination of Rea is WorldSBK will end and with his skills, Suzuki hopes that Rea will answer their prayers in bringing in more podiums if the transfer is successful.

Despite all the rumours, it seems that Suzuki will keep their word of maintaining Andrea Iannone until the end of 2018 according to their contract. Whatever the plans may be, we are confident that Suzuki definitely has something up their sleeves and once the time comes, they will drop the bomb.