This weekend’s MotoGP race in Silverstone will see a new flag-to-flag bike swap procedure being tested due to safety concerns.

The Safety Commission and Race Direction decided to test a new system where riders who want to swap bikes will need to come in front of their paddocks at a 45-degree angle inwards with the second bike ready pointing outwards at the same angle.

An additional mechanic will be in the pit lane with a Formula 1-style lollipop stick who will stand in front of the second bike to signal the rider when it is safe to re-enter the pit lane.

This weekend’s MotoGP race will see a brand new flag-to-flag bike swap procedure being tested by the Safety Commission for the British GP in Silverstone. The call towards a newer and safer system to swap race bikes in the pit lane during flag-to-flag races have been put forward by Race Direction after riders couldn’t come to an agreement following a meeting after the race in Brno.

This is the PROPOSED bike change protocol that will be TESTED tomorrow during FP2 to improve the safety in case of flag to flag races. pic.twitter.com/FpiV7V7I9Z

Concerns were brought into attention due to several incidents that happened in the last few rounds especially after the Andrea Iannone and Aleix Espargaro incident. Iannone apparently tried to avoid a collision with Espargaro and ended up locking his front end which caused him to fall and unable to continue the race. Check out the video of the incident below at the 2 minutes 40 seconds mark.

There were other past incidents as well where some riders lost control of their race bikes and ended up colliding with mechanics and team members out in the pit to assist with the bike swap. Check out the video below where Alvaro Bautista crashed into a mechanic during last season’s Argentina GP.

According to Eurosport reporter, Vanessa Guerra, she tweeted a very detailed illustration of the new bike swap procedure. If the riders choose to swap their bikes during this weekend’s race, they would need to come in front of their paddock at a 45-degree angle. 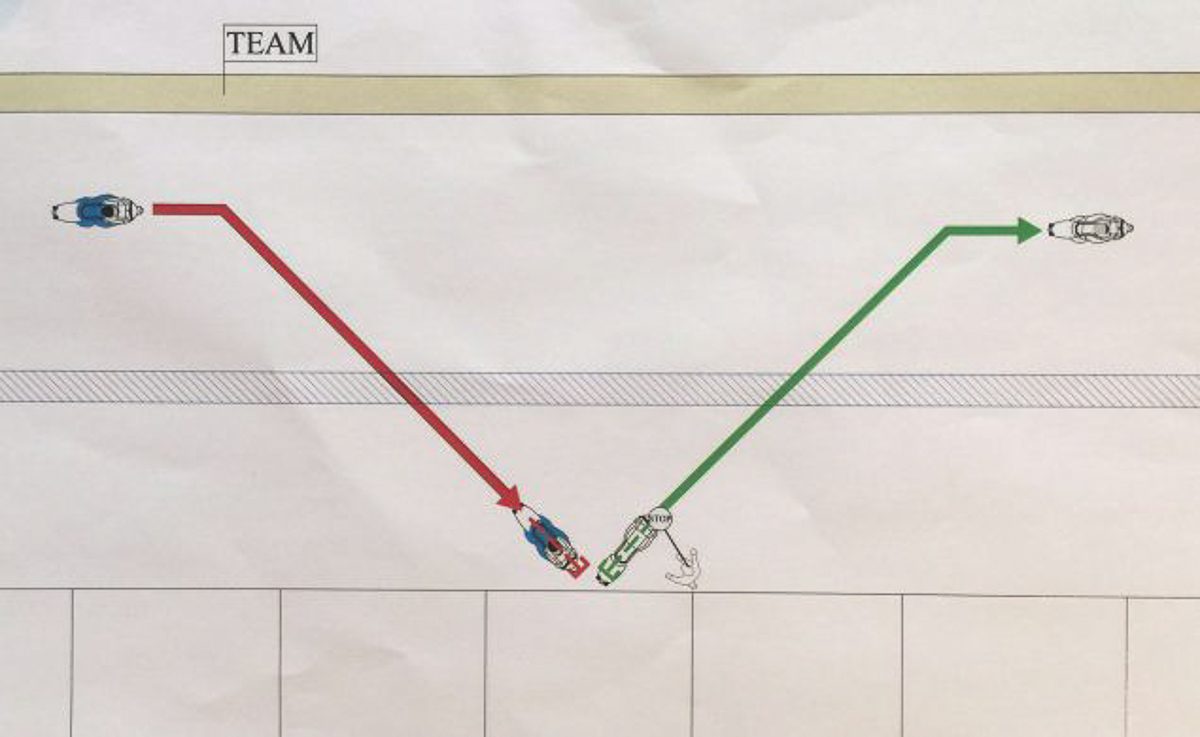 The second bike is ready and waiting pointing outwards at a 45-degree angle as well for better visibility to the happenings in the pit lane. In addition, teams must also prepare another staff member to handle a Formula 1-style lollipop who will decide when riders can exit safely into the pit lane once they have boarded their second bikes.

Some riders raised concerns regarding this new method were it anything were to happen during the entry with the first bike, the possibility of causing more harm to the mechanics and occupants in the paddocks are greater.

After all, the reason why riders choose to swap the bikes is due to lack of grip especially when it starts to rain. This particular risk was voiced out by a number of riders including Repsol Honda’s Marc Marquez and LCR Honda’s Cal Crutchlow.

With weather conditions pointing towards the possibility of bike swapping this Sunday in Silverstone, riders and teams will only know for sure if the new bike-swap system is a better procedure compared to the previous “hop and go” arrangement.