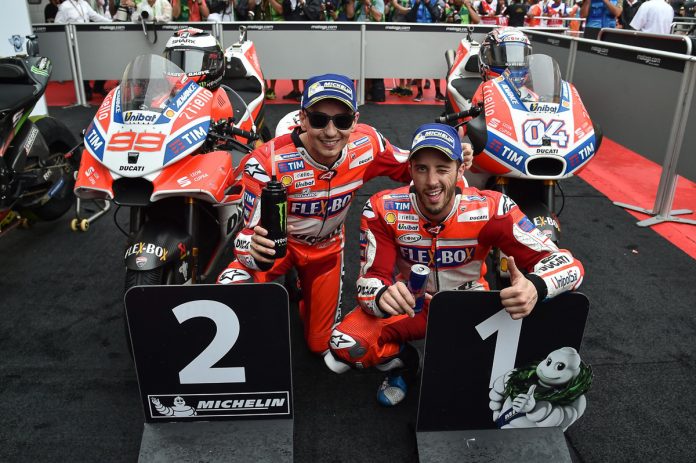 The penultimate MotoGP round of 2017 saw a battle in the wet where Ducati duo Andrea Dovizioso and Jorge Lorenzo celebrated a one-two finish.

Dovizioso and Marquez will battle it out in the final round in two weeks’ time upon arriving in Valencia. 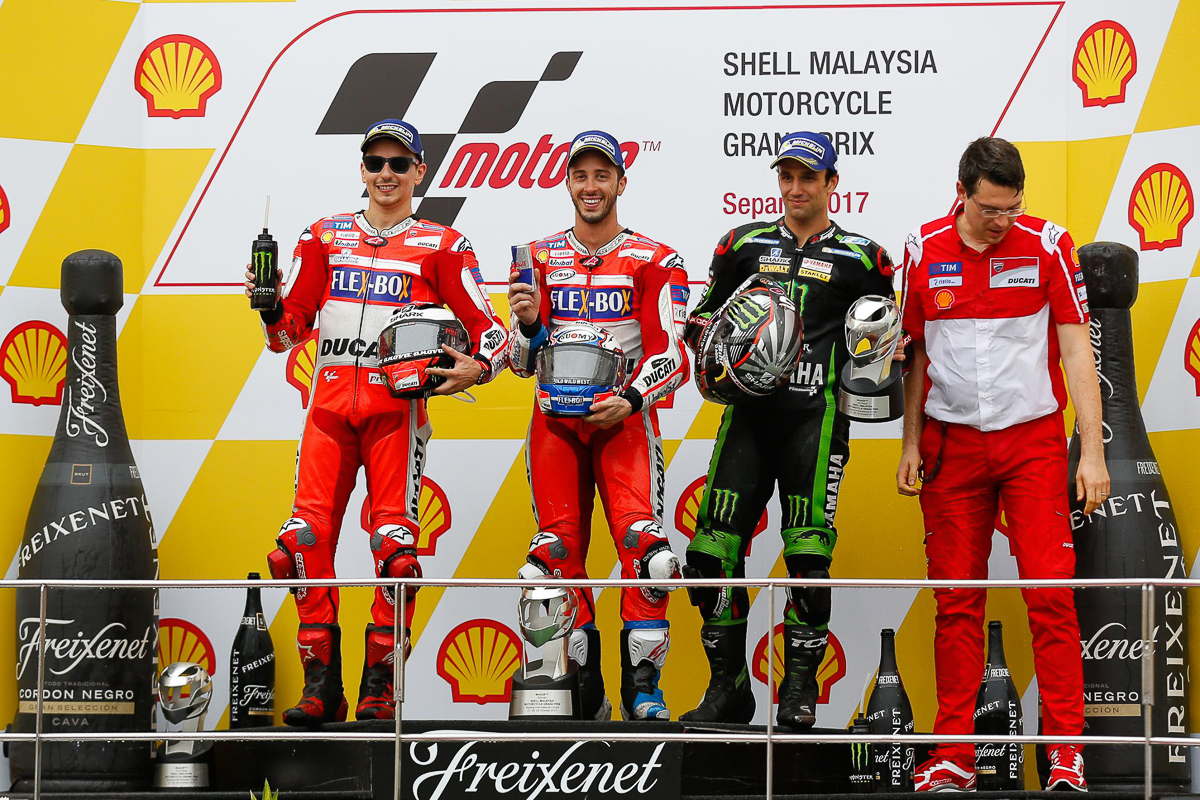 The final flyaway race saw the things that made the Shell Malaysia MotoGP one of the most interesting rounds in the calendar each year. Just as the Moto2 race ended with a one-two finish from the Red Bull KTM Ajo duo and of course the 2017 Moto2 World Champion Franco Morbidelli, the skies opened up and unleashed a fury of rain. Although it was short, the rain was enough for Race Direction to declare it as a Wet Race. 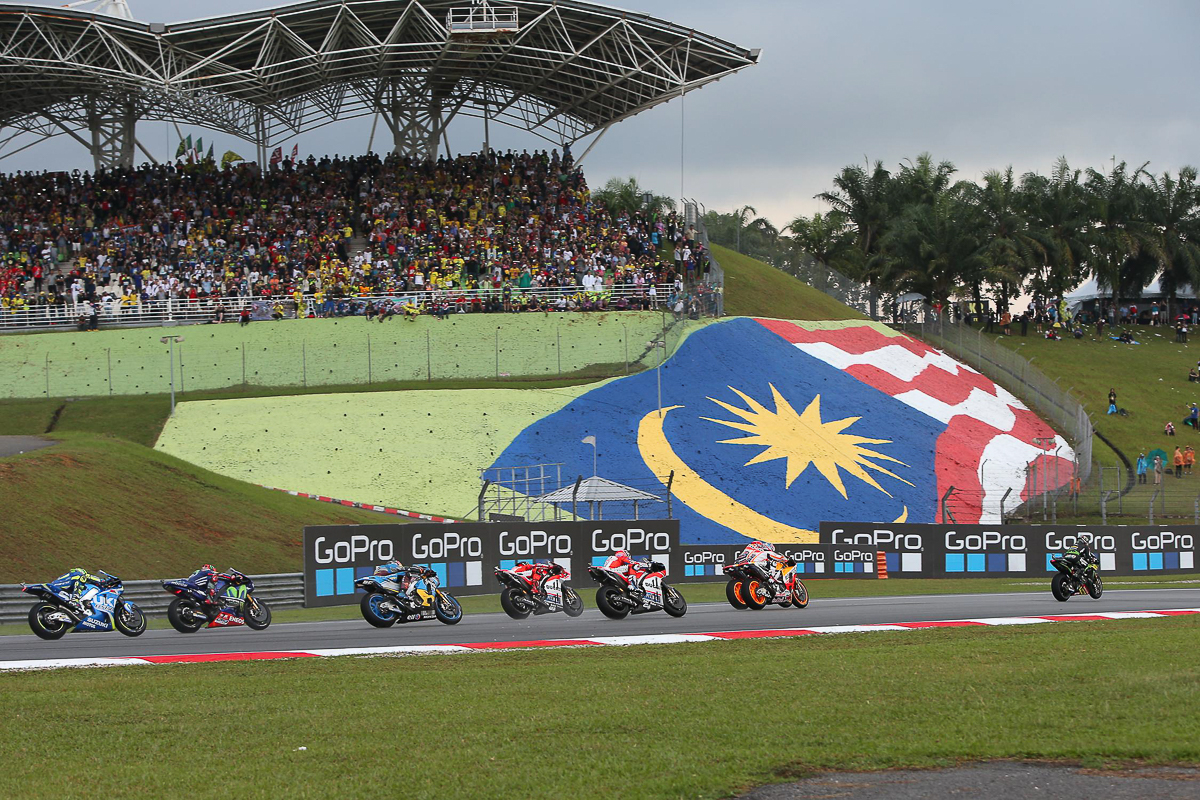 With a few minutes to go, teams and mechanics scrambled to get the bikes set for the wet. Starting from pole, Dani Pedrosa (Repsol Honda Team) started from pole with Johann Zarco (Monster Yamaha Tech 3) and Andrea Dovizioso (Ducati Team) joining in the front row. 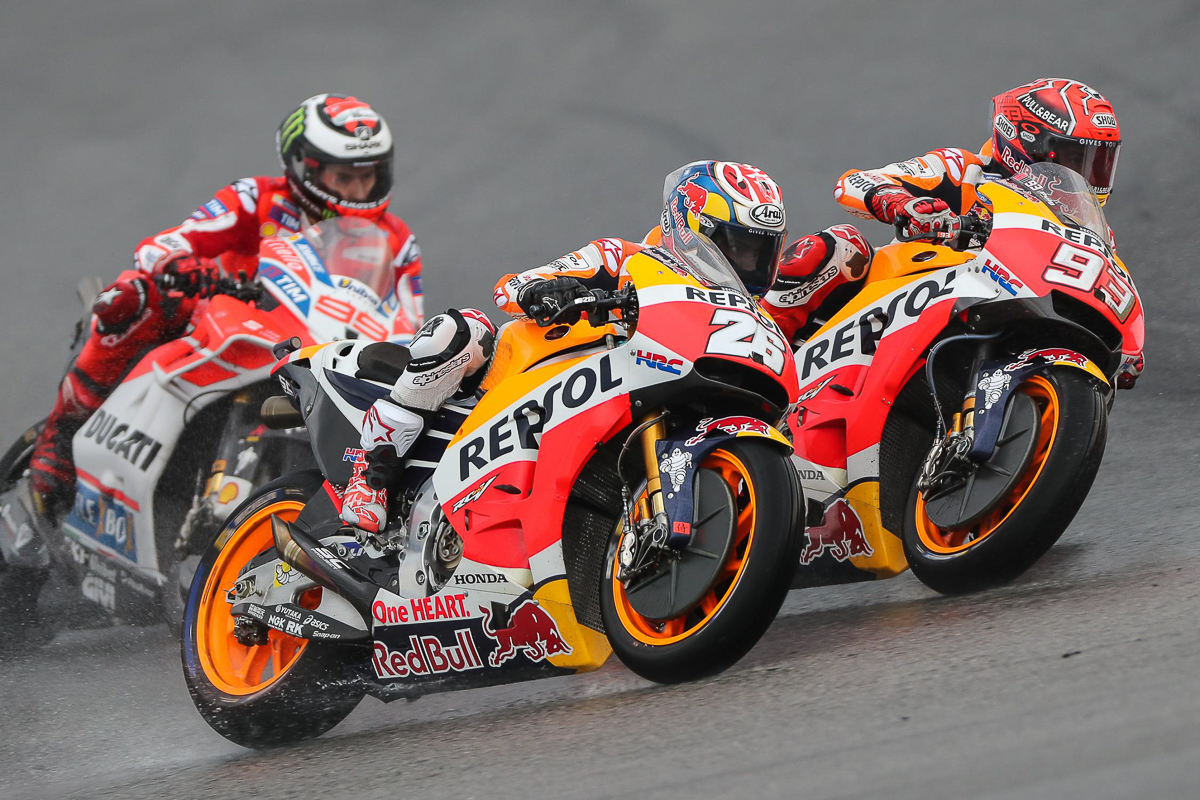 The rider who’s currently leading the 2017 MotoGP championship that is Marc Marquez (Repsol Honda Team) started from seventh following a rough qualifying session. The race began with Marquez having to battle it out with Valentino Rossi, Maverick Vinales and Jorge Lorenzo who qualified in front of the 24 year old Spaniard. 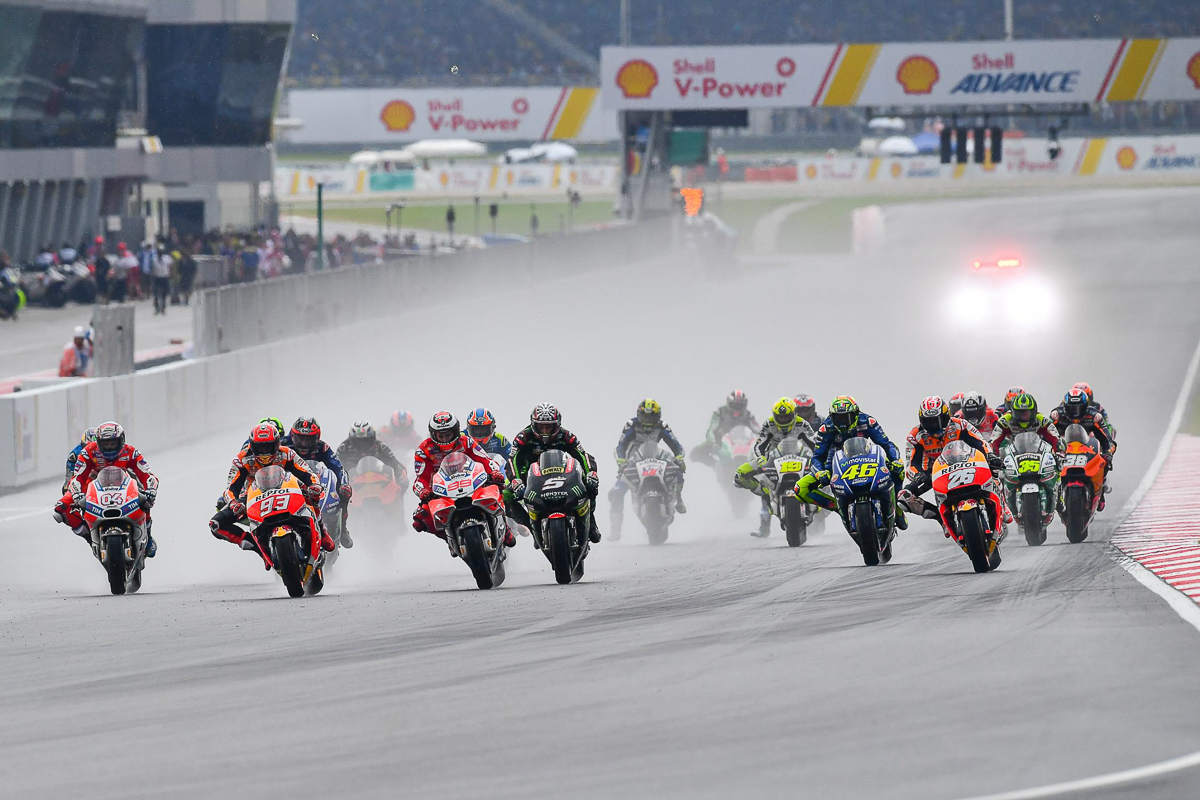 From the get go, Marquez blasted through the pack and was first to reach Turn 1 before going wide which affected Andrea Dovizioso as well. Johann Zarco and Jorge Lorenzo took the opportunity to jog away from the rest of the pack. Zarco managed to lead the race for quite some time before Lorenzo overtook the Frenchman as his rear soft option tyre started to degrade. 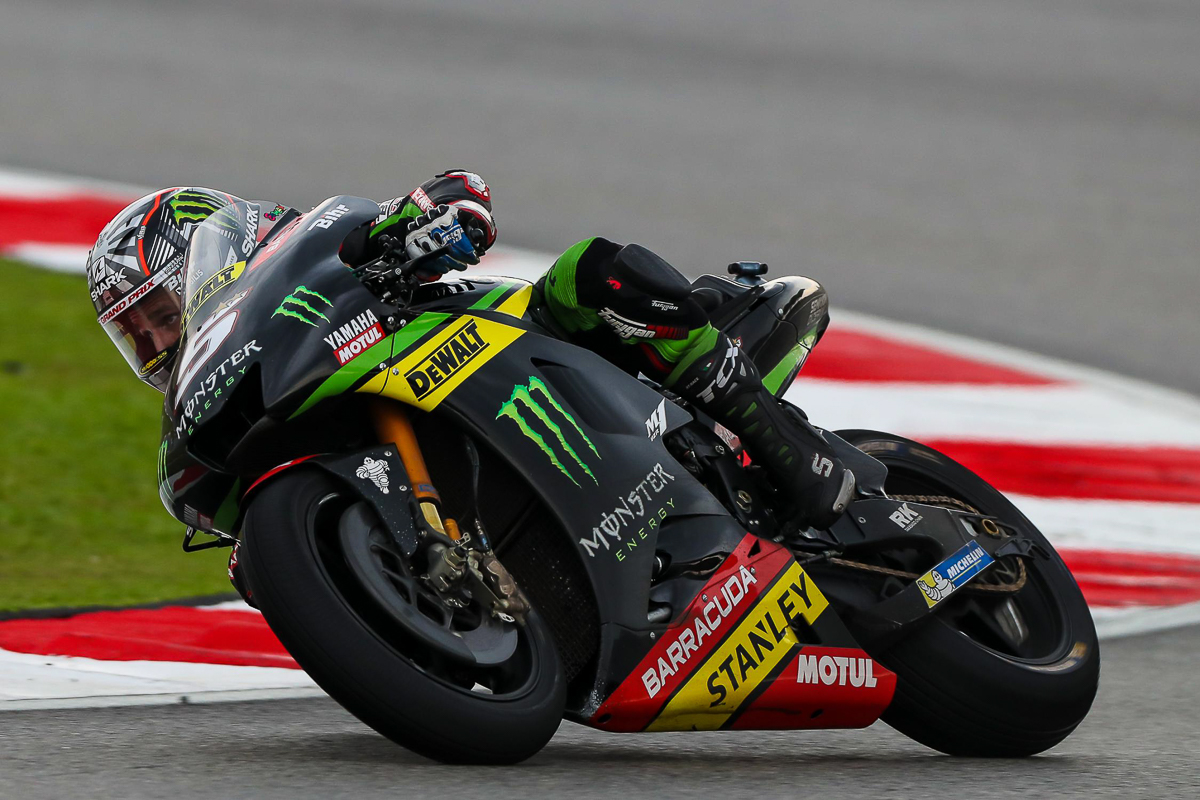 Marquez and Dovizioso managed to claw back up the rankings but it was Dovizioso who managed to ride brilliantly in the wet and passed Zarco and Lorenzo in the final laps of the race. 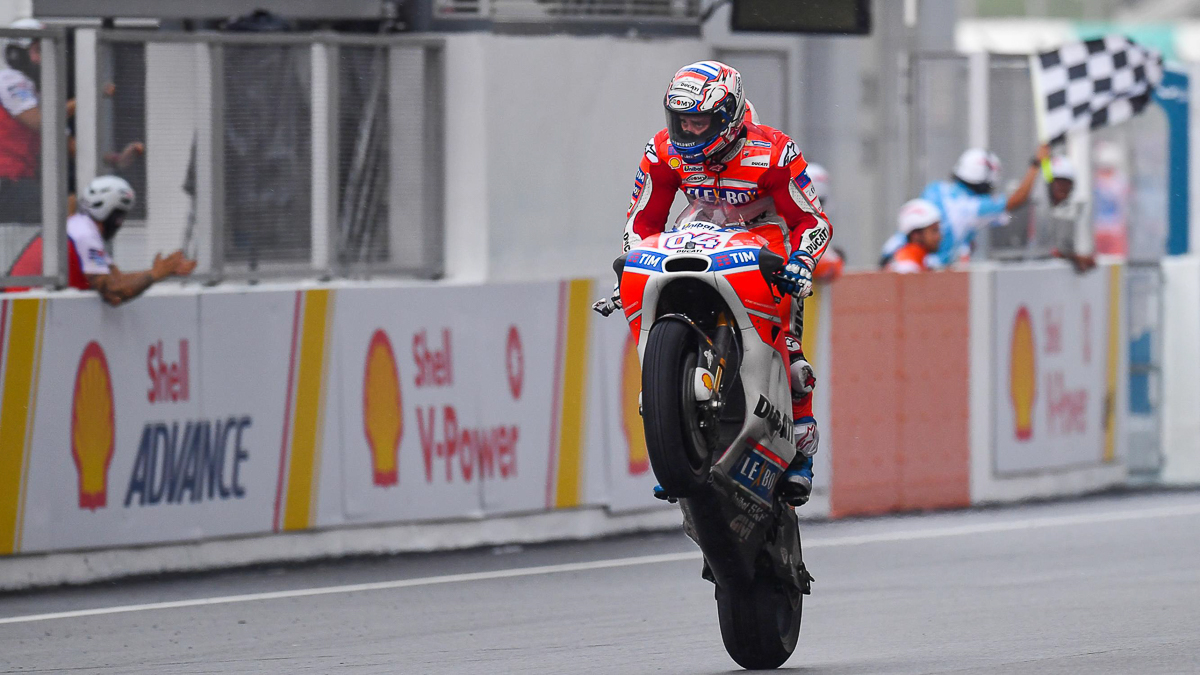 At the chequered flag, Dovizioso took the victory closely followed by team mate Jorge Lorenzo and this season’s top Independent and Rookie of the Year, Johann Zarco in third. Marquez settled for fourth. 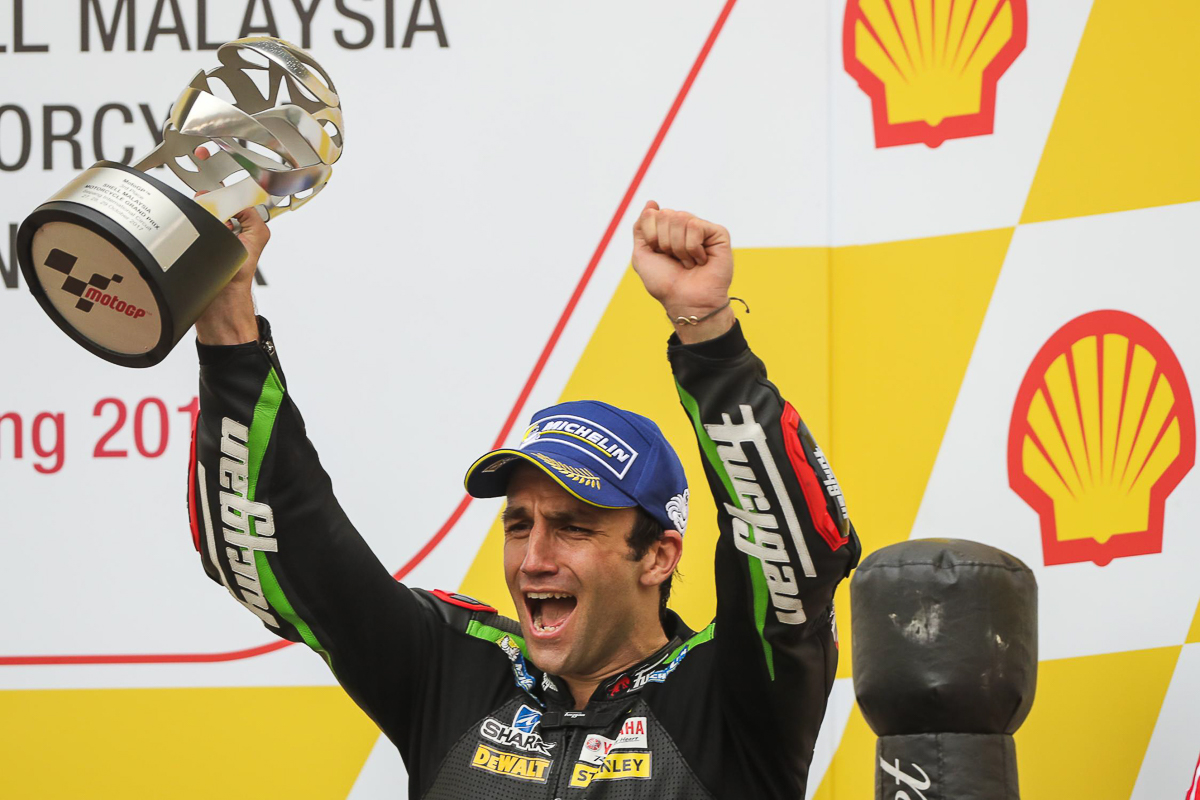 After Marc Marquez, there was a significant gap with the other finishers from Dani Pedrosa (Repsol Honda Team) who crossed the finish line in fifth all the way to Pol Espargaro (Red Bull KTM Factory Racing) who completed the top 10 riders. 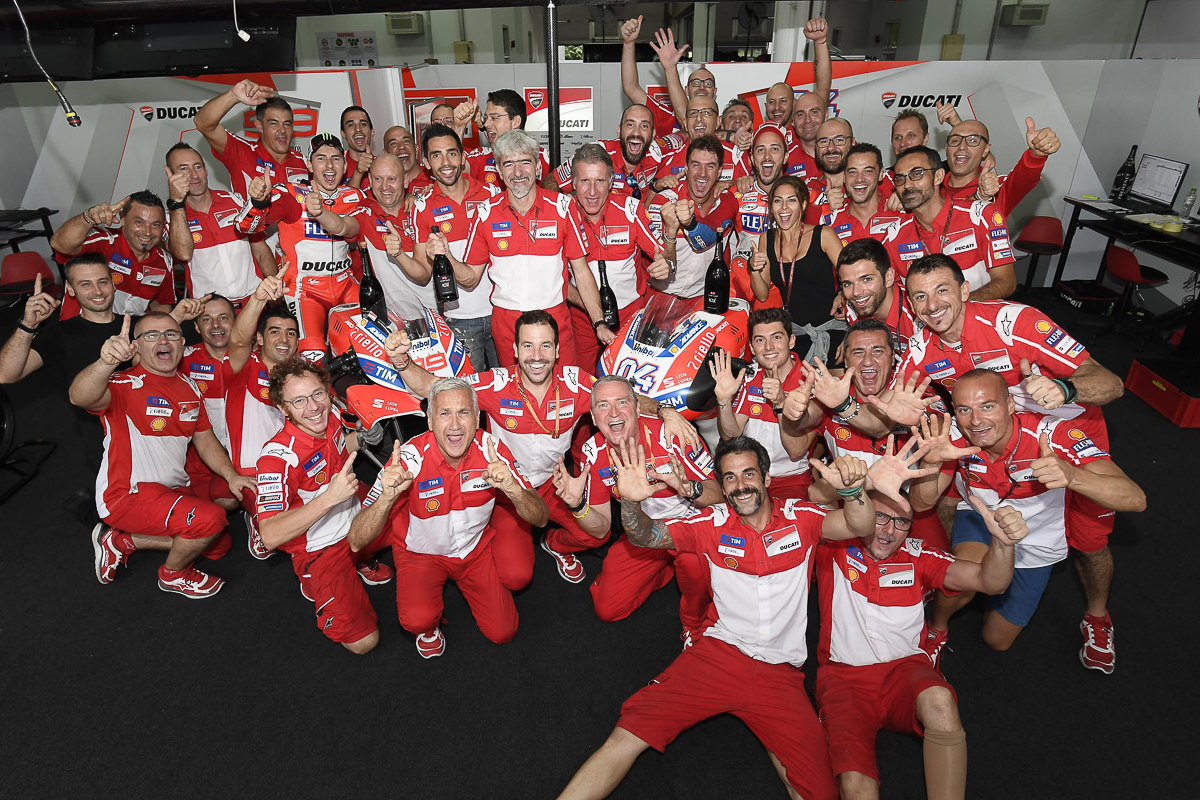 As of now, Marquez still leads the championship with 282 points which is 21 points more than Andrea Dovizioso. That’s a considerable gap so even if Dovizioso wins the final race in Valencia, all Marquez has to do is finish in eleventh or higher to seal the deal. Not a difficult thing to do but when it’s racing, anything can happen anywhere at any time. 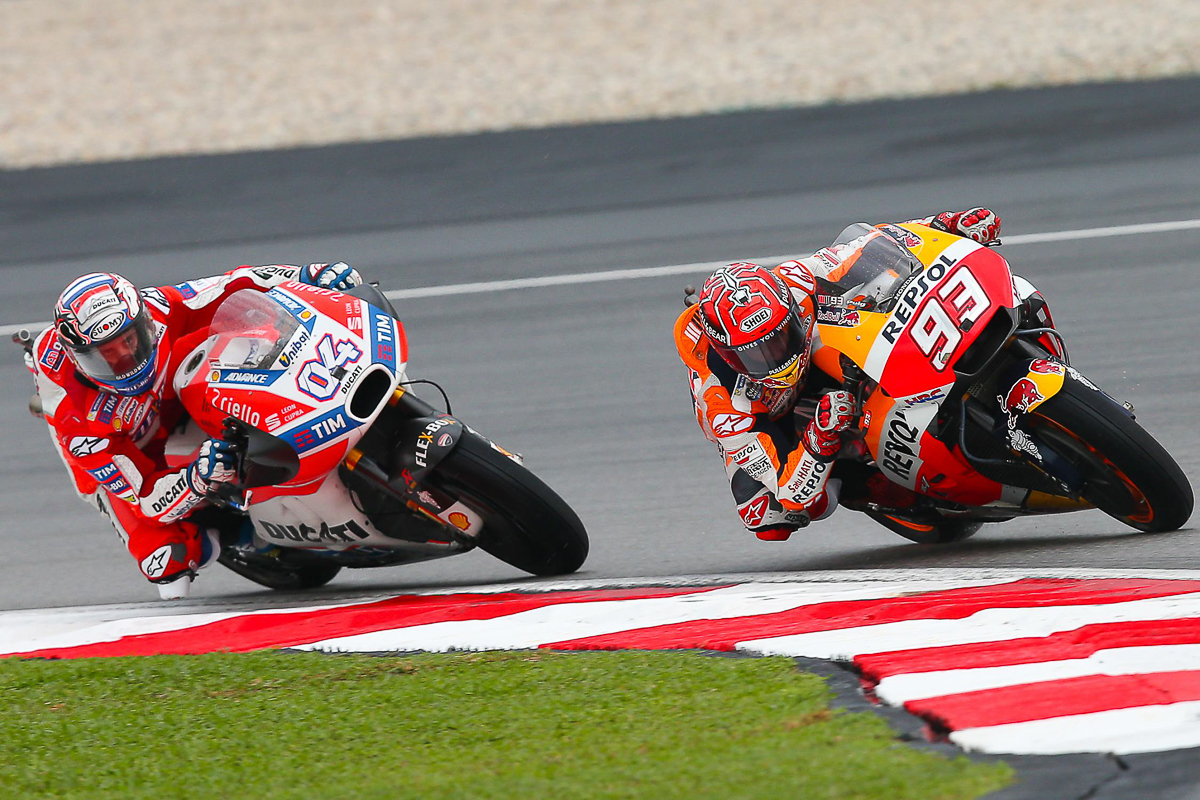 The final round will head to Valencia in two weeks’ time on 12 November 2017. Will the Spaniard be triumphant in front of his home crowd or will the Italian finally give Ducati another champion after Casey Stoner? Stay tuned to Bikes Republic as we head to the final showdown.

And have you heard that Petronas wants to give some lucky people a year’s worth of engine lubricants? You can be one of those lucky people too by taking part in a simple contest. For more information on the contest, you can visit www.mymesra.com.my/pengejarimpian