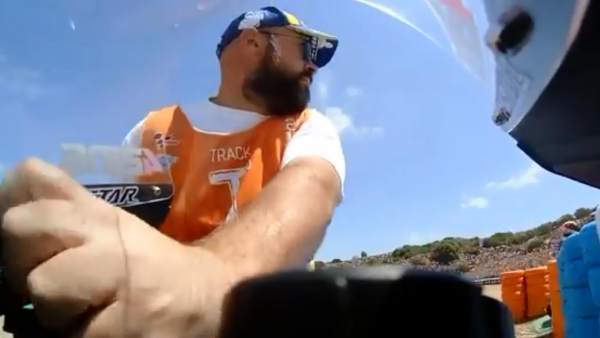 The Jerez marshal who stole an item from the Suzuki of Alex Rins at the Spanish MotoGP 2019 has returned the item.

Alex Rins rode another incredible race on his Suzuki GSX-RR in yesterday’s Spanish MotoGP. He qualified in 9thand fought his way up the field to finish 2nd.

But when he parked his bike at a barrier and got off to celebrate with the fans in the stands, a track marshall reached down into Rins’s bike and removed the sweatband covering the front brake fluid reservoir. The marshall then inserted the item into his pocket as he watched Rins finished his celebrations and rode back to parc fermé.

The marshall must have forgotten that MotoGP bikes are equipped with “live” action cameras. Soon, his face and act were circulated around the world.

Alex Rins laughed it off when he was asked about it. He even joked that it’s probably selling on Wallapop (the Spanish version of Lazada) for €1,000 by then and that he’d buy it back if he saw it.

Alex can his money since the race organizer has forced the marshal to return the item. Additionally, he is required to apologize to Rins and the Suzuki Ecstar team.