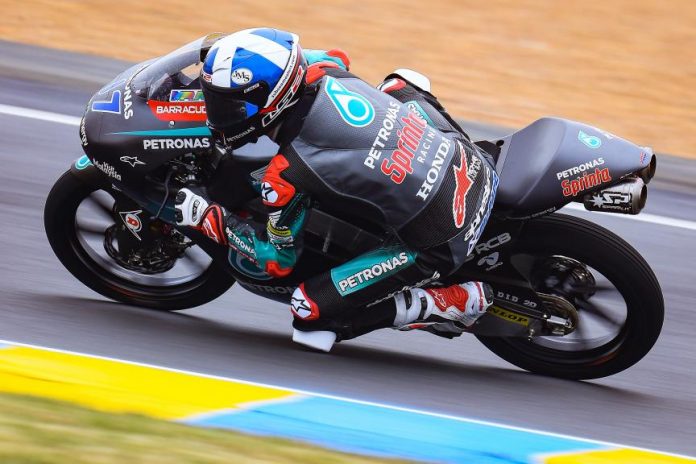 John McPhee rode a gritty Moto3 race at the French GP to give the Petronas Sprinta Racing Team their maiden victory.

The Scottish rider had see-saw beginning to the weekend but managed to capture pole position in Q2. He was also fastest during the morning’s warm-up session.

McPhee was third at the end of Lap 1 but he hung in there, keeping himself in the top three for most parts of the race.

Again, it was Tatsuki Suzuki who led from the start. Although pursued closely by the group, Suzuki controlled the pace from the front. Unfortunately, his bike’s rear tyre slid under him in Turn 3 on Lap 17.

By then McPhee and Lorenzo Dalla Porta have gone through. Suzuki’s crash opened up a gap behind the duo, leaving them to duke it out to the finish. But it was McPhee who held the advantage from the penultimate lap and past the finish line. Della Porta finished second, while Aaron Canet battled his way up to come home in third.

The victory was also the first podium for McPhee in three years.