Continuing on with our Most Interesting Biker (MIB) series, we caught up with Malaysia actor and entrepreneur, Jehan Miskin. 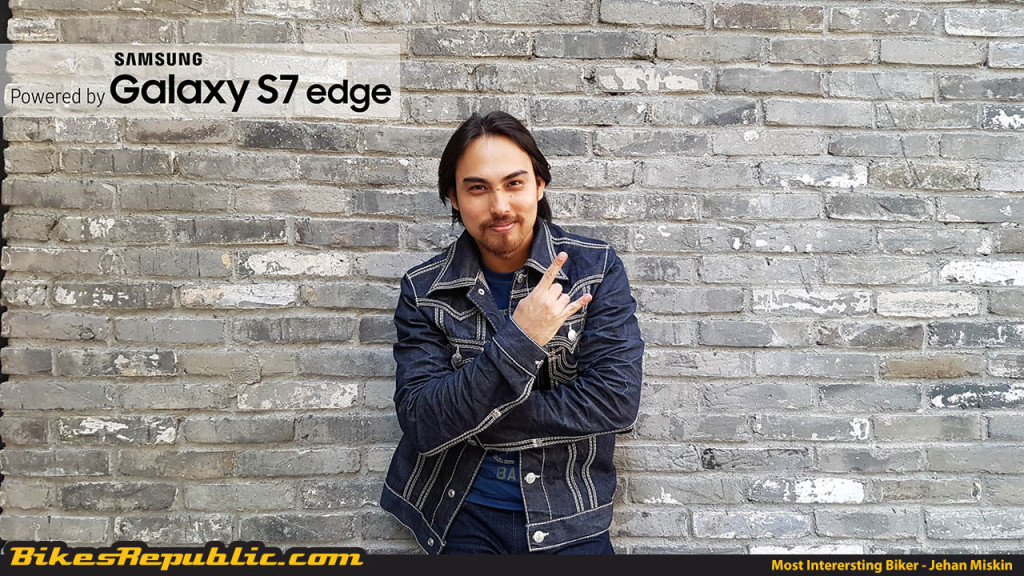 There are lots of celebrity bikers in Malaysia, both male and female, and we hope to be able to write about them all as we go along, but Jehan is a dear friend to us so all it took was a Whatsapp message explaining the MIB series and a reply saying, “sure, want me to bring my bike?”

It is also funny to think that someone who never learned to ride a bicycle would eventually end up riding Harley-Davidsons to places most people don’t ever visit, what more on a Harley-Davidson.

“I never learned to ride a bicycle as a kid,” he said over coffee in Empire Damansara.

“My brothers and sisters all learned but not me. I remember being 11 or 12 and crashing my brothers bicycle at the backroad of my terrace house in SS2. I fell in the drain and the bicycle looked like it had been crashed, but I learned to ride a bicycle on my own eventually.”

The big switch to motorcycles came at 14, an era Jehan describes as “zaman mat moto.” That was the period of the Kawasaki Victors, Yamaha TZMs, RX-Z and the Kawasaki KIPS. But his first bike was the tiny but fun 125cc, two-stroke Cagiva Mito. After that and for many years he didn’t have a bike as he focused on developing his video production business.

But the calling came eventually, just as it always does. Jehan was invited to attend a Harley-Davidson event which required some riding. Being more of a sports bike kind of person, he says he didn’t think much of the Harleys, until he saw a Nightrod.

Video: The ride to Shangri La in China

The bike belonged to a customer who agreed to let Jehan ride it to a movie premiere, up north and eventually sold the bike him.

“I have a lot to thank Awie* for in that decision to eventually buy the Nightrod. The owner had let me ride the bike to an event in Perak, so when I met Awie I told him about my experience and showed the bike to him. Awie told me to change the handle bars and gave me a piece of advise I didn’t forget, and so I went and bought the Nightrod,” says Jehan.

He rode it around town for a few years first, hung around with the Harley Owners Group, and never really went on long distance rides. Until the Asia Harley Days in Thailand came along, and that was it. The tour riding bug had hit, fast forward a few years and Jehan and some mates are conquering Chinese roads in search of the real Shangri-La, not the five star hotel.

He has taken the bike where no Harley-Davidson Nightrod owners would go, and there were places where the bike wasn’t even designed to go, like the twisting mountains of Laos, and the dirt roads of Thailand. Places a BMW GS or a Kawasaki Versys would feel more at home on, not a Nightrod.

“I have always been a superbike kind of guy, but I had a pact with my brother to never own or ride a superbike. They are really fast bikes, and our mother and sister were completely against the idea, so to keep things cool we decided to agree on a pact to ride, but not on a superbike.”

Jehan’s brother eventually got on a superbike but not before promising his younger brother all kinds of things.

“And so I felt that the Harley Nightrod was one of the few bikes that could give me the performance of a superbike without being a superbike. I have always appreciated a Harley but never really wanted one, but the Nightrod is cool enough, dragster enough, powerful enough, a hybrid between a cruiser and a superbike.” – Jehan.

After our meet in Empire Damansara, Jehan went on another ride to northern Thailand for Songkran and to Bangkok to hook up with Harley owners over there. Spending over two weeks on the road, the Nightrod once again was the weapon of choice.

“Riding has evolved to be more than just speed for me. It is about friendship and it is about getting away. There is escapism in riding, adventure you can’t get anywhere else. When you ride long distance, you are in a new town everyday. It is about being on the road and not worrying about anything else but the road, that is why I ride,” concludes Jehan.